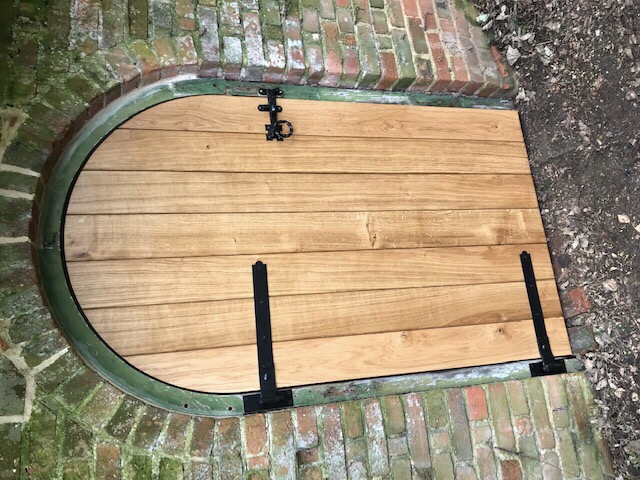 (Try as I might, I’m struggling to get photos the right way up. I’ll investigate that.)

I thought I’d put up a picture of an oak door/gate I made recently. I really enjoyed making it and it’s doing this which has prompted me to do a bit more - hence my other posts about trying to get a small workshop up and running.

I made it without really knowing what I was doing so I wouldn’t be surprised to find that it warps and tears itself apart, although I did build in some room for expansion between the boards (there is a spline running in a groove between the boards, glued in one board to stop it dropping out the bottom, and “free” in the other board with a gap inside the groove and between the faces of the boards).

It weighs an enormous amount so I also half expect to find it lying face down under a pile of bricks one day!

To get the shape, I made a full size template out of MDF. Through trial and error I was able to deduce that the arch is half a circle which meant that I could make a “compass” for my router to make an accurate curve template.

I then made the door slightly oversize and got to the final shape with the router by following the template with a flush cut bearing bit.

It was very much a machine based project (I bought a hobby planer/thicknesser to size the boards from rough sawn dried planks). I’d like to have a play with some hand tools as well in the future because it’s fun to learn new things.

Whilst not perfect, I’m pleased with how the door turned out.

It looks a tad tight width wise -there isnt much tolerance on the opening side, I wonder if the door might grow a bit.
N

I think that’s an optical illusion from the angle the photo is taken from. That side of door frame is also bent back and is quite loose (the hinge side is OK). It’s on the list to fix at some point.
M

That's some nice work there Nick, with some nice Ironmongery to match.

People don't realize just how heavy these things are until they get them off the hinges :lol:

Recently made a new frame for an old church door which was made with a hollow core frame (IE, 2 Stiles and a top, mid and bottom rail) which was then clad with 20mm oak boards either side joined with false tongues just like your door. Door thickness was about 3" overall and it definitely weighed an excess of 120KG easily, it took two quite large boys just to move it about and were still struggling a little!
N

Mine has a similar construction on the back, but with the arch as well. It’s 2” thick in total.

I am pretty nervous about the strength of the frame, but it seems to be OK after a few weeks in position.

presumably you are taking the pics on a mobile phone?
(whatever happened to real cameras? :roll: )

sunnybob":3vrke1a5 said:
presumably you are taking the pics on a mobile phone?
(whatever happened to real cameras? :roll: )

Yes, it was on a mobile. It shows the right way on the phone. I also tried rotating it so it was wrong on the phone but it was still also wrong on the site. I’ll have another try when I get a chance.