This is my latest adventure in making reproductions of ancient planes.

In 1991, two planes and a billhook were found during archaeological excavation of the remains of a Roman villa near Oberüttfeld, Germany. I found three academic papers in German containing information about these tools and, with the aid of Google Translate, I extracted enough information to allow me to make reproductions of the planes. It seems that the tools date from the 4th century AD or earlier and they were found carefully hidden in a hypocaust (under floor heating duct) at the villa. The tools are kept in the Rhenish State Museum in Trier, Germany.

The dimensions of the small plane are: total length of sole 211 mm; total breadth of sole 44 mm; total thickness of sole 9 mm; breadth of mouth 29 mm; length of mouth 8 mm; centre of mouth is 60 mm from the front of the plane and 151 mm from the back end; body width of plane is 44 mm; top of plane is 50mm over the bottom of the sole; iron length 170 mm, iron width 29 mm; iron thickness 4.5 mm, cutting angle 54 degrees, wedge angle 28 degrees; free angle 26 degrees. The cutting edge of the iron is slightly curved.

The German authors describe the small plane as a Putzhobel ( = smoothing plane) and the large one as a Zahnhobel ( = tooth plane) and they point out that by swapping the irons between the planes it would be possible to have effectively four planes. They are of the opinion that the toothing is for providing a good surface for glueing and they do not appear to recognise a possible use for planing wood with difficult grain, which I think is more likely. I feel that that the small plane, with its cambered iron and comparatively wide mouth, may be more like a scrub plane than a smoothing plane.

I have started by making a replica of the large plane. The original is made of wrought iron and an unknown wood. I chose to use bright mild steel and holly. We know that the Romans could make tool steel in small quantities and I have used O1 steel to make the iron. Before heat treating the iron I formed the toothing by cutting grooves freehand with a junior hacksaw, hence the rather irregular spacing. The reinforcing plates let into the sides of the plane are unusual features. They are held in place by three rivets running through the body of the plane, one of which serves as the cross pin for the wedge to react against.

I tried the plane on some difficult apple and iroko and it worked well, producing a finely grooved surface that could be smoothed easily with a cabinet scraper. The shavings look rather like tobacco. It is quite comfortable to hold and I like the rather streamlined appearance. I have no idea why the iron is so long but an interesting detail of the original is the maker’s stamp: GESATVS. 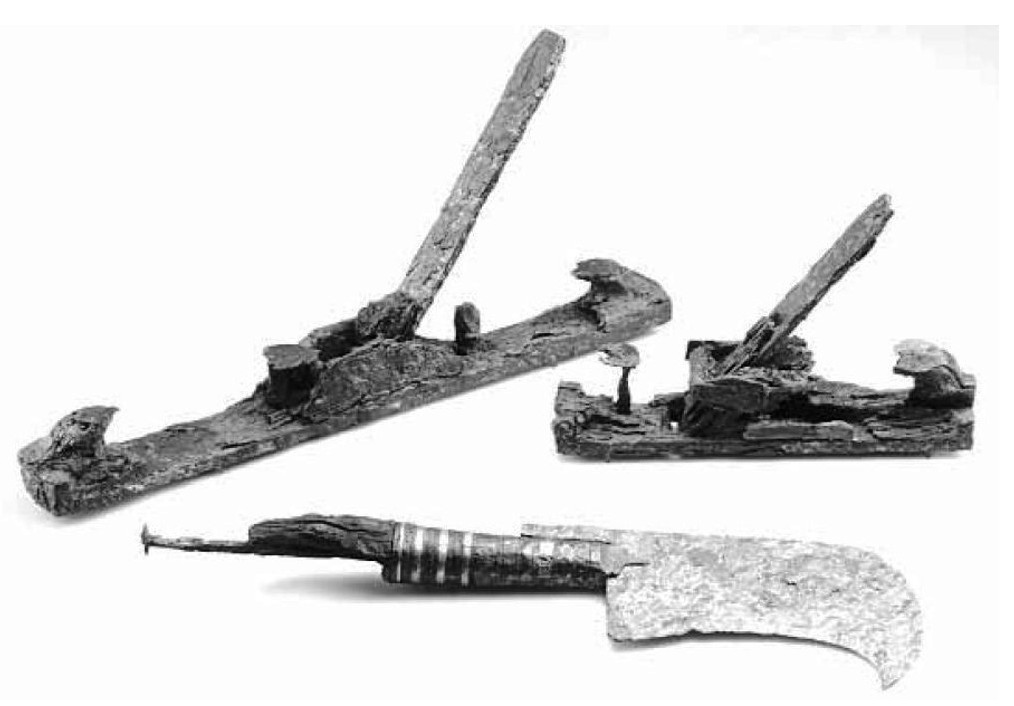 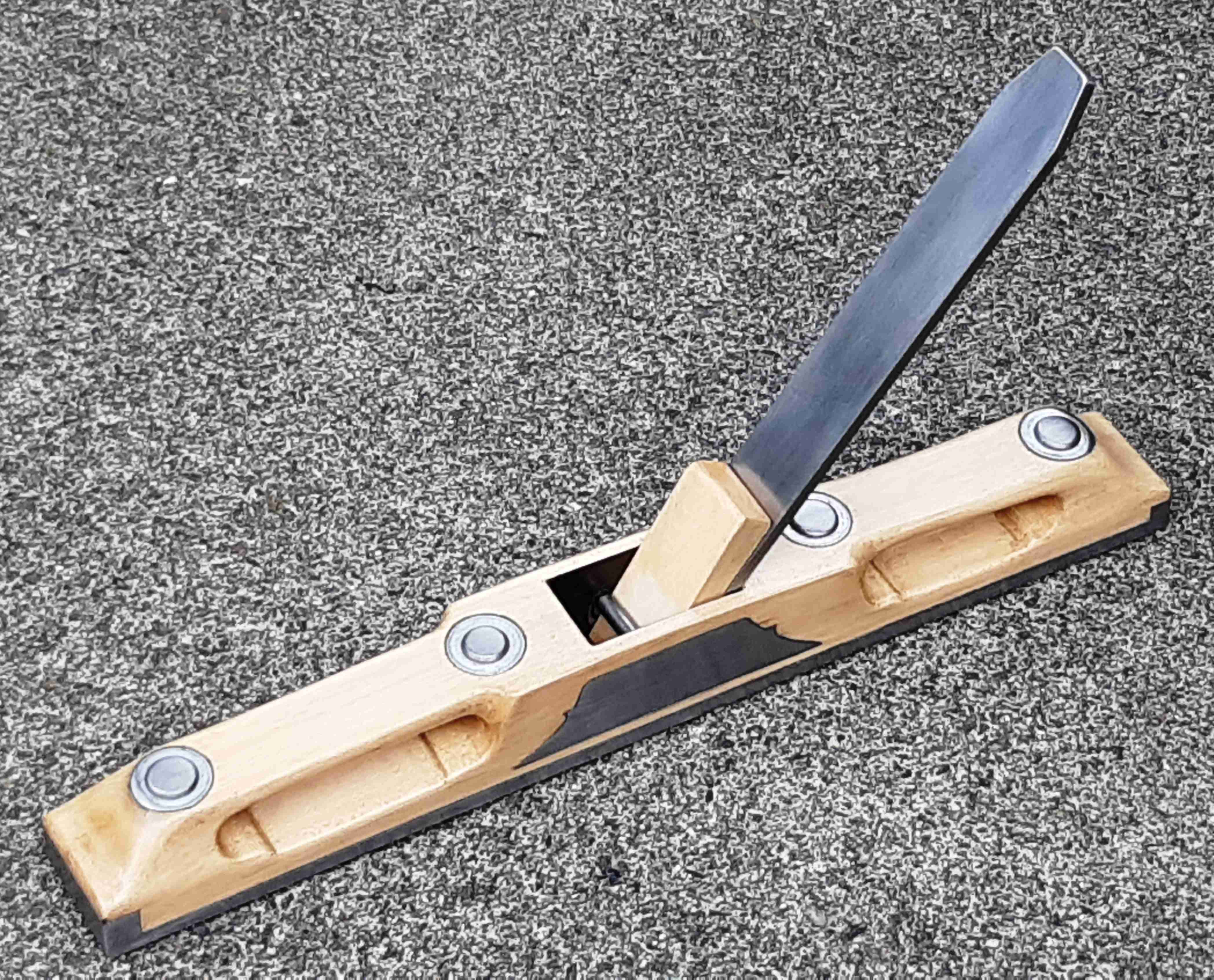 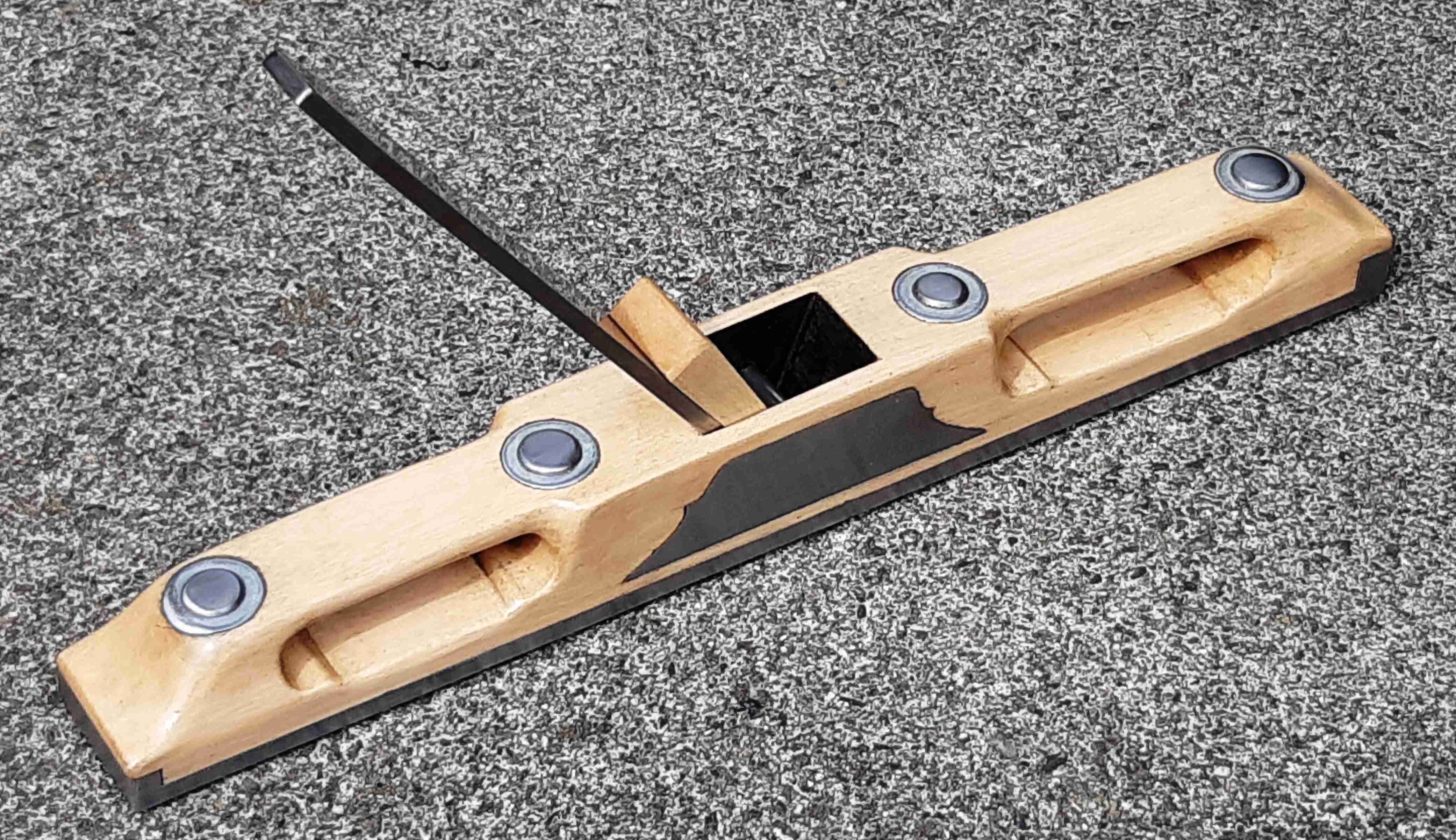 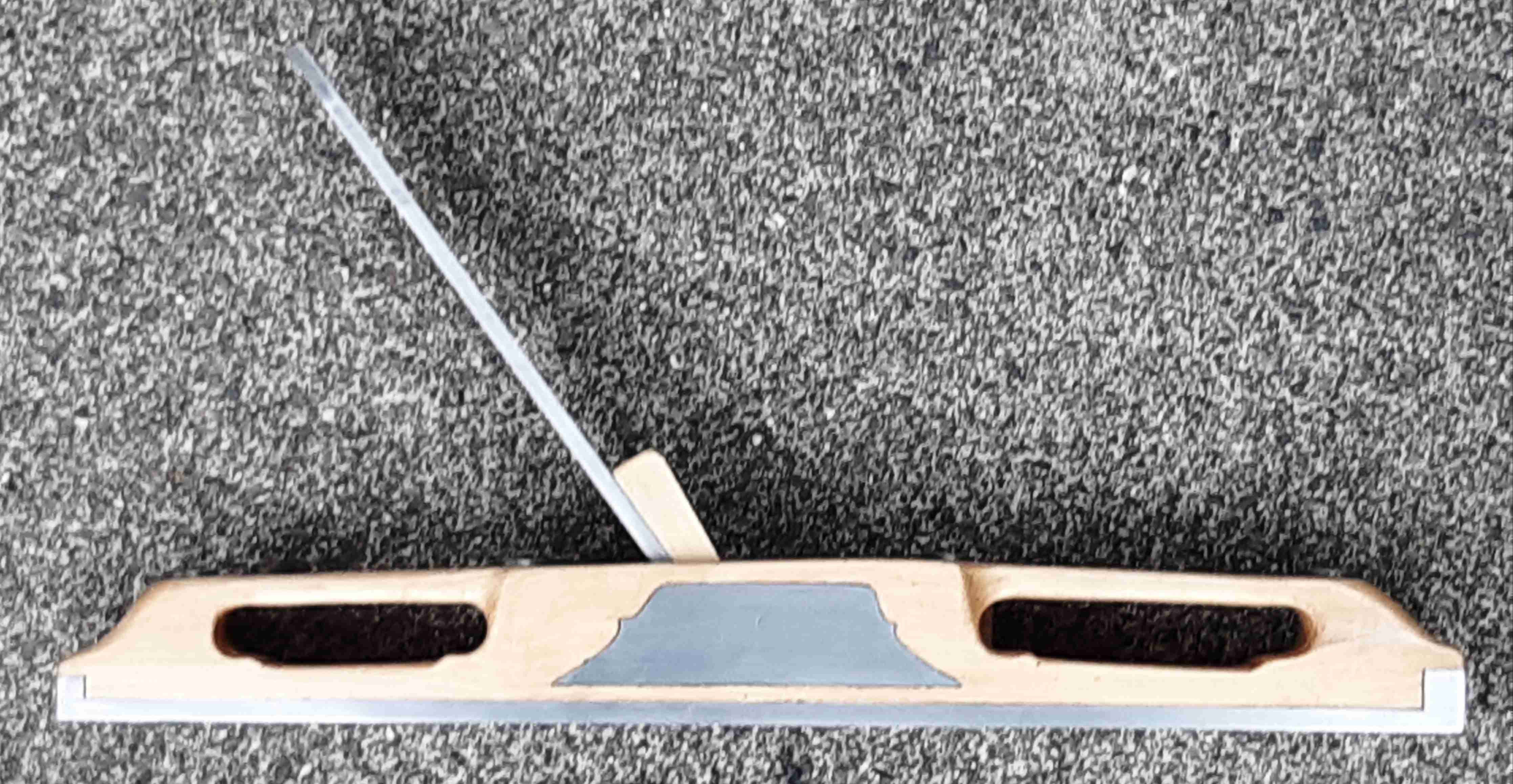 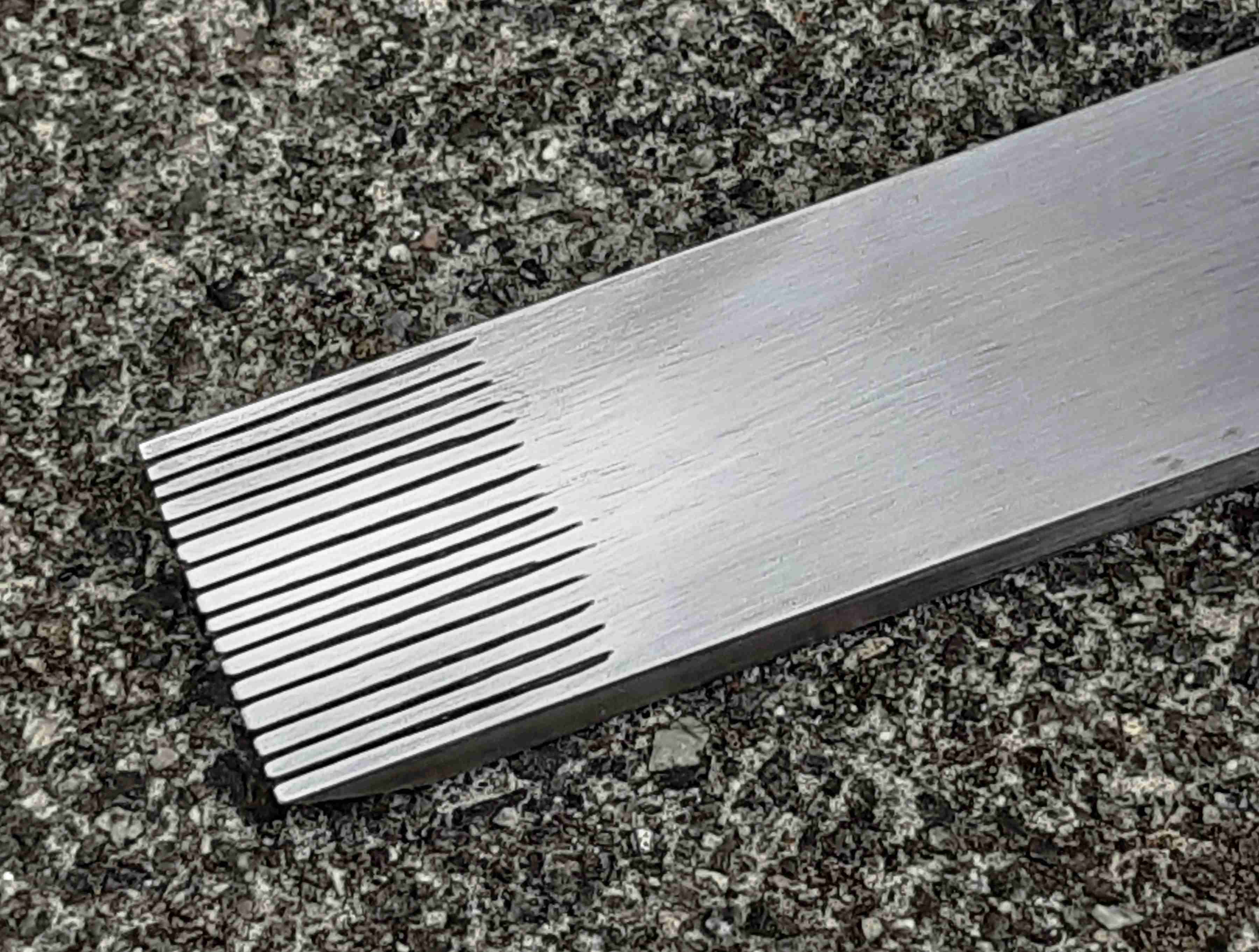 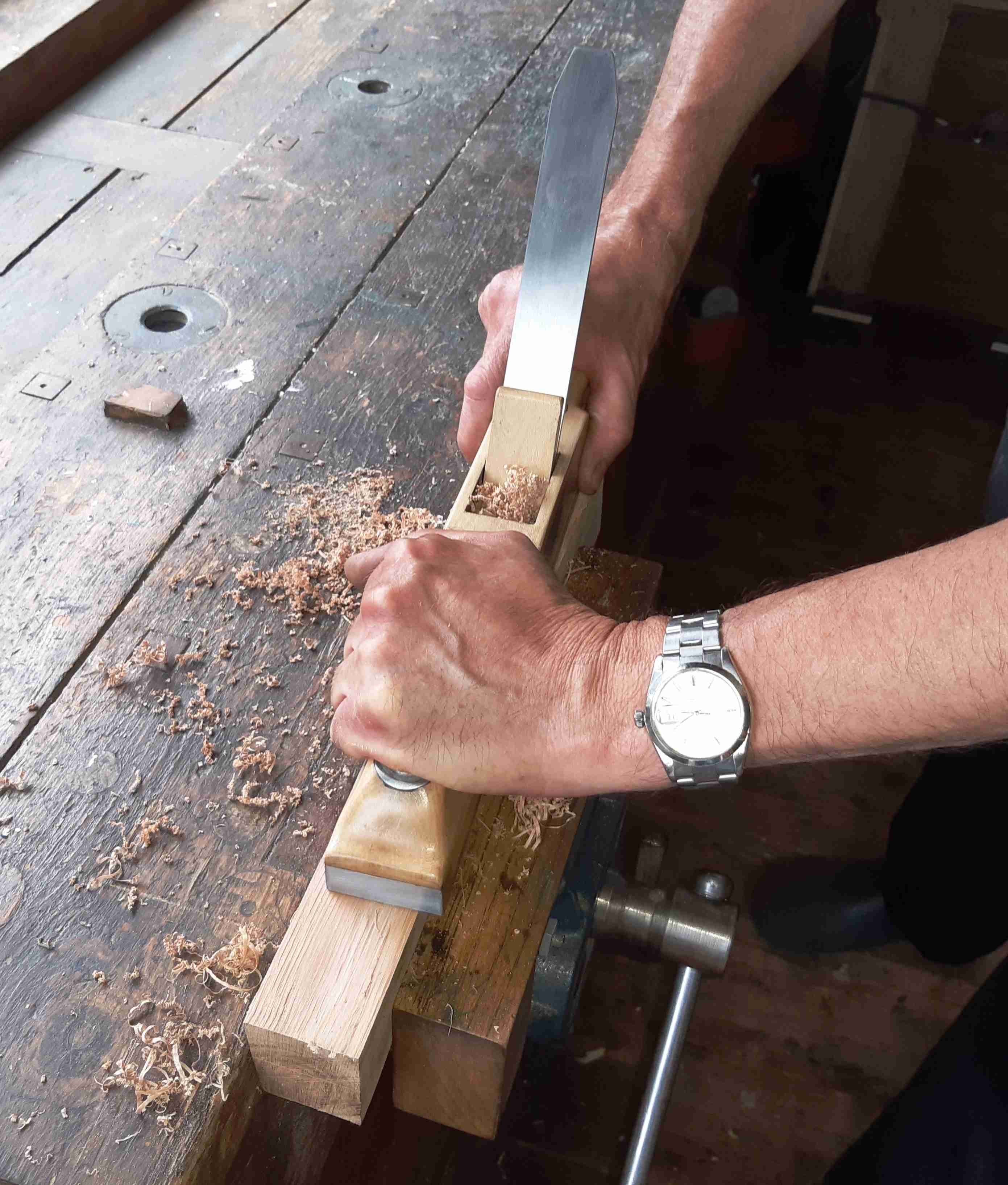 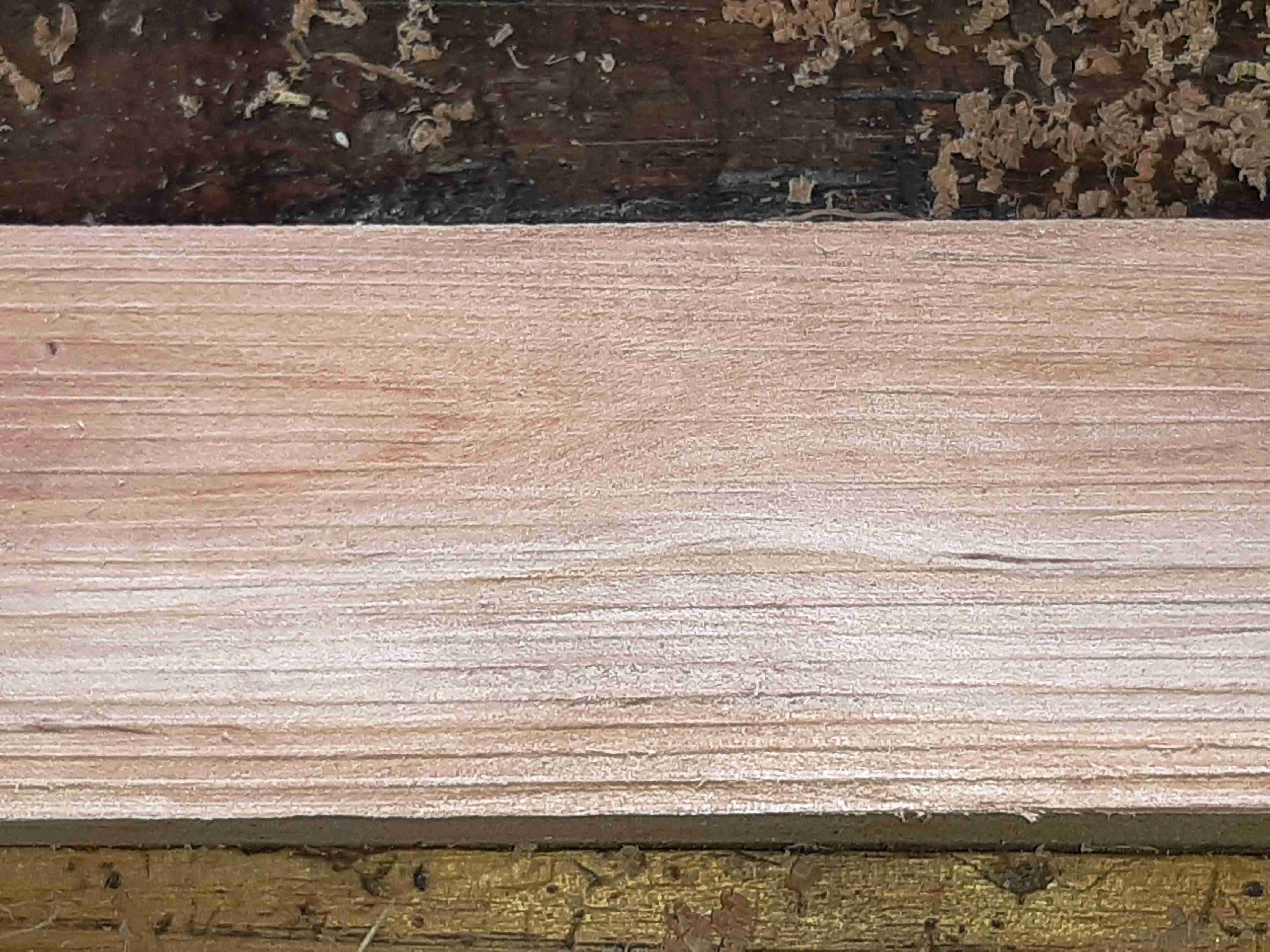 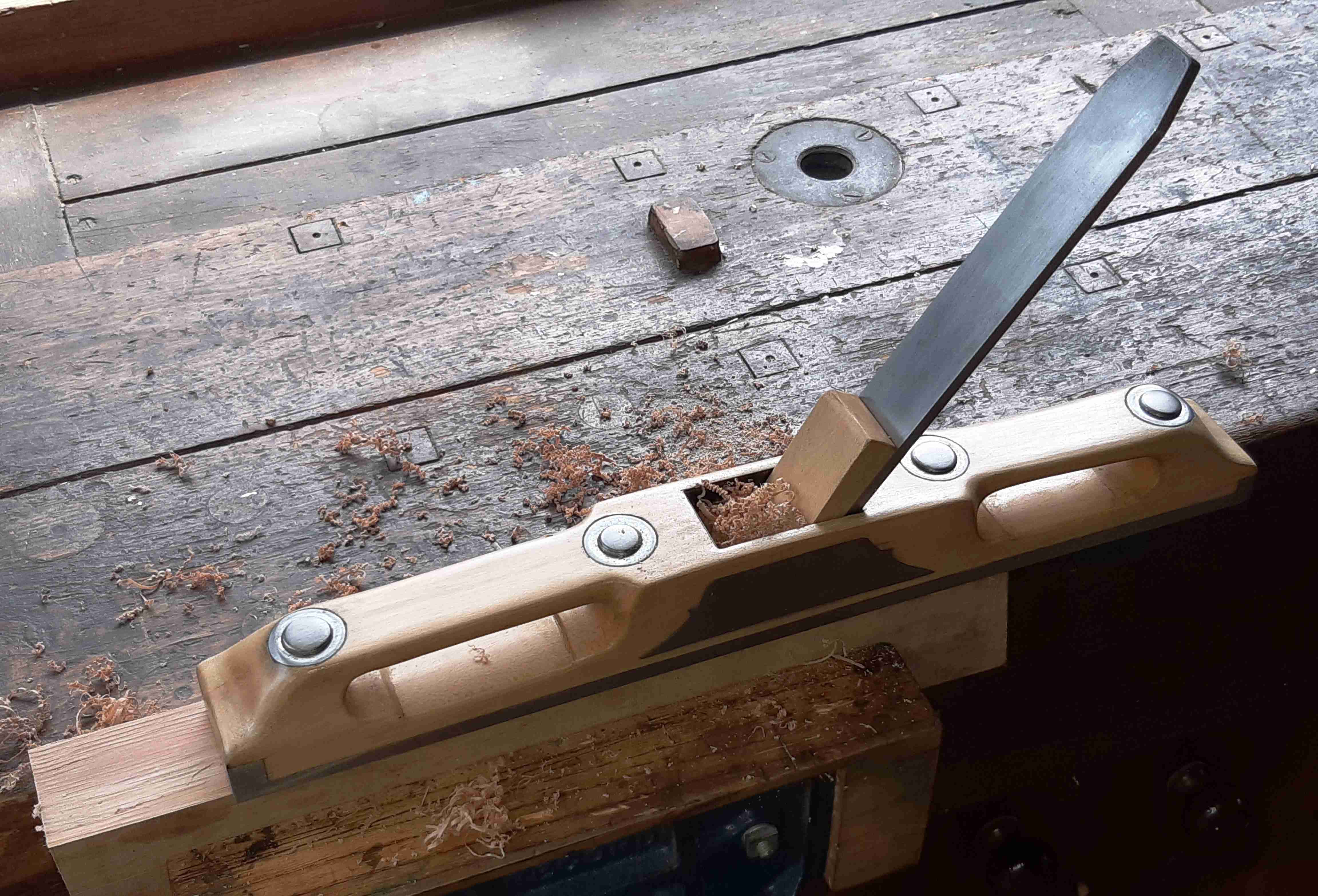 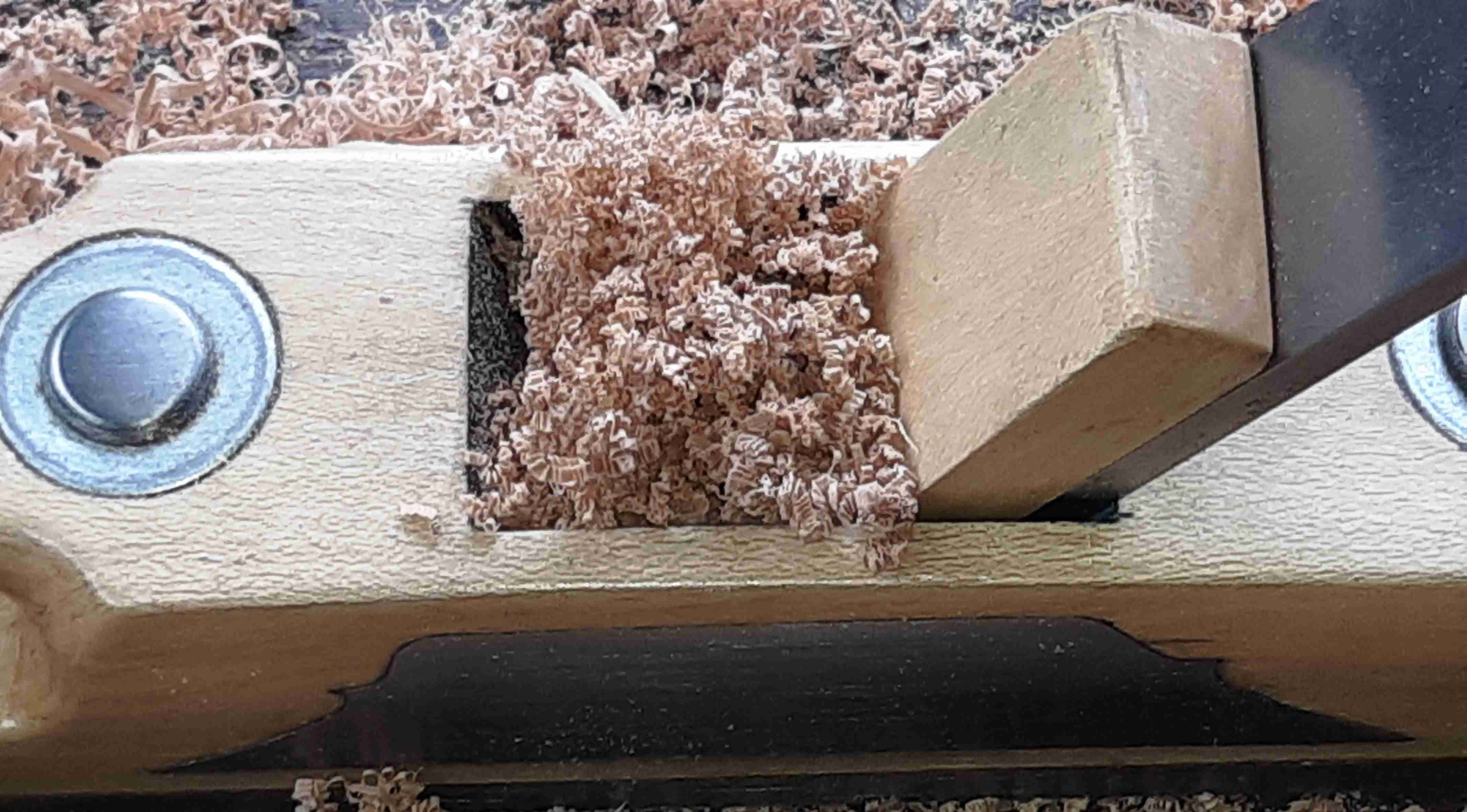 Wow, more brilliant work!
When are you opening your own museum?

As well as the historical investigation, I love the way you discover such stylish creations!

Oh and maybe the extra long iron is to discourage you from bad posture - stoop down too low and it'll take your eye out!
R

Thanks Andy - I think I may have only scratched the surface of ancient planes in Germany. They seem to take such things very seriously there. I think Norway and Denmark may be promising too.

Those Upper Outfieldians certainly knew what they were doing with Roman planes. Is that really meant to be a toothed ironed plane for difficult woods?

I think you should send it to me Richard. I am literally just about to make a low roman bench to use in the garden at home, seeing as I am still not allowed to go to the workshop. Me is verily in much happiness to test it out for you

Are your teeth accurate to the original in size and number. Or are there more on the original
R

Droogs said:
Are your teeth accurate to the original in size and number. Or are there more on the original
Click to expand...

I wasn't able to discover the details of the teeth on the original so I cut as many as I could using a junior hacksaw. Maybe I could have cut a few more using a piercing saw at the expense of a few blades. I'd be very interested to know how toothing was cut by the Romans (and by the Victorians).

Ah now ,I know the answer to that.


The teeth are made before the iron has cooled and hardened by the blacksmith with an appropriate cold chisel. The iron is then hardened and ground on one side only. I used to have a link to a video showing the making of a toothing plane from scratch by hand but can't find it just now.
Last edited: 19 Aug 2020

A thought on the cutting of the grooves in the blade. A small hammer and a graving chisel could be used to cut the grooves before heat treating the blade. It would certainly be easier for the blacksmith to make and maintain a sharp edge on a thin chisel over a metal cutting saw blade. Come to think about it a hardened comb like tool could be hit with the red hot steel blade to forge the teeth into it.

You're on a fascinating journey there, rxh, and I love your reproductions, as another plane-maker, I can appreciate the work & thought that must have gone into them.

Now I'm a complete ignoramus on the subject of ancient planes, (the minuscule amount I have learnt is all thanks to you

), but when I look at the originals, it seems to me that on the larger plane, the residual bits of iron at each end, and the blobs before & after the "frog" are much too thick for rivets & curve up in a way that suggests they once formed solid iron handles and there may not have been any "infill" on this plane? On the smaller of the two, it does look like the remains of a thick rivet on the toe end, but again, what's left of the rear end suggests to me it might've had a solid iron handle too, that was contiguous with the frog, in this case??

Copying the planes in the way I've interpreted the remains would be a pretty challenging job for the most competent of blacksmiths, I'd reckon, so maybe I'm out to lunch here. I imagine you spent a lot of time studying the originals & thinking about how they were made, so if you tell me I'm dreaming, I'll go quietly.

Incidentally, have you ever come across any suggestions, or worked out anything yourself, as to how they might have flattened the soles after forging, back in the day? That part has intrigued me ever since I saw the first plane of this type unearthed...
Cheers,

I love the holes in this, I might even do that on a krenov style plane because it would make it easier to use, genius idea, it's fair to say that ancient people might have been onto something.

Richard, do you ever send photos of your reproductions to the museums involved? If so, do you generally get a response? I'd be surprised if some of them didn't ask you to make a copy for them.

For those interested in more information about how and what Richard gets up to; he gave a fantastic talk on the Benchtalk101 Youtube channel, link below:


escelllent watching by the way
A

rxh said:
Thanks Andy - I think I may have only scratched the surface of ancient planes in Germany. They seem to take such things very seriously there. I think Norway and Denmark may be promising too.

If you need any material translating from German (provided it's not whole books), pm me. Google can be an unreliable translator.
R

Thanks to all for your comments.

This illustration is taken from: Detlef Bach (1999): Zwei römische Hobel aus Oberüttfeld, Trierer Zeitschrift 62, 1999, S.181 – 191. Herr Bach is a restoration archaeologist and this paper describes a detailed examination that he made of the planes. It shows that the sole has upturned ends and is secured to the body by four vertical rivets. This method of construction seems to have been commonly used in Roman planes. In this case I cheated and riveted on separate pieces to create the upturned ends. No doubt a skilled blacksmith could form them by forging. When i made my reproduction of the Goodmanham plane I did forge the ends but they were rounded rather than sharp right angles so were less of a challenge to do. I described this operation in this thread:

The sole of the Goodmanham plane started as a nice flat piece of bright mild steel but needed quite a bit of straightening and scraping to make it flat again after all the brutal treatment that it had received. I don’t know how the Romans flattened their soles but I would really like to know. Their options would seem to have been scraping, filing and rubbing on abrasive stones, much like hand tool methods today.

Returning to the Oberüttfeld planes, the rearmost rivet of the smaller plane does seem to have an extended head that curves backwards and down. I haven’t yet worked out how I’ll make that one.

I should mention that I also referred to the following learned articles when I was researching the Oberüttfeld planes:
The following threads contain photos and details of my other ancient tool reproductions:

MikeG, in answer to your question, when I made my repro. of the Silchester plane I sent a photo to the Reading museum, where the original is kept, offering to provide further photos and information if that would be of interest. I received no reply and have been discouraged from trying again as I have no qualifications in archaeology, conservation or history. 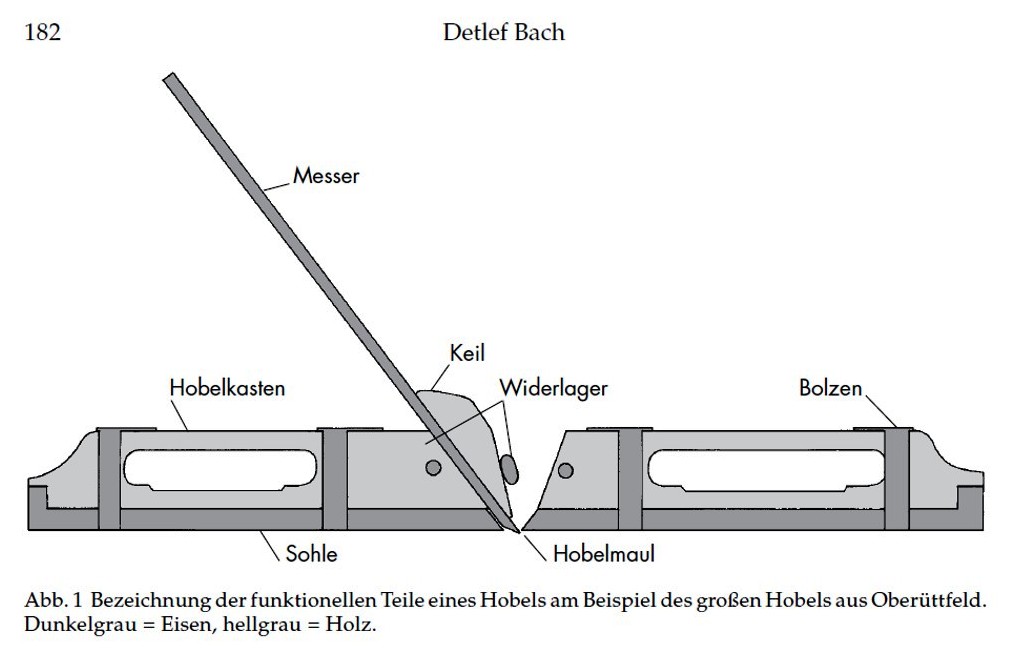 Arrogant bunch of gits. Unfortunately academia is full of them.
You must log in or register to reply here.