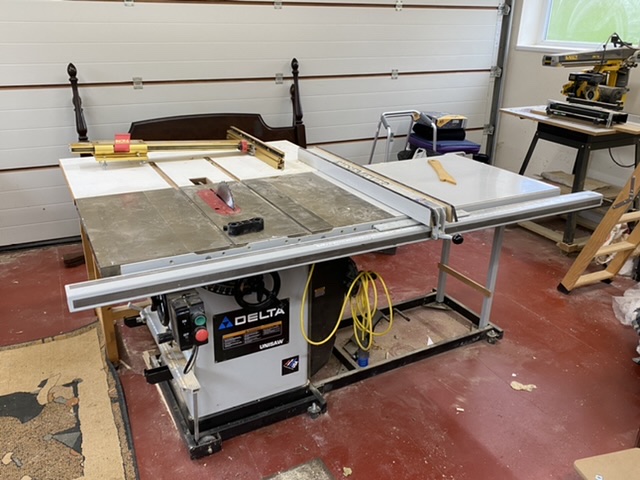 Hi
I’m looking for some advice on my father-in-laws table saw and accessories.
Sadly he passed away in March this year and we now have the task of clearing out his workshop.
We have a Delta table saw with some accessories and a homemade table extension.
I’ve tried to do some digging on value and model but not knowing much about this sort of stuff i ended up on this forum.
I’m not sure exactly which model or how much it’s all worth only that it’s very good quality.
Any help would gratefully appreciated
Thanks

I'm no expert and hopefully others with more knowledge will be along soon.
I think the Deltas are American and the Unisaws I've seen have two crank handles on the front. Yours seems to have one.
If you could take a pic of that model plate , it may give us a better guide as to the exact model.
I can't see a blade guard or riving knife. but often they're not fitted on American models.
Maybe you have those somewhere else ?
A modern Delta is well into four figures when new but hard to say with this without knowing its age and a bit more about condition.
Do you know when it was last used regularly ?
P

Thanks for getting back to me.
I think it does have 2 Crank handles. I’ll try and get more pics up.
It was last used around 12months ago. I’m sure I’ve seen a guard in the wo 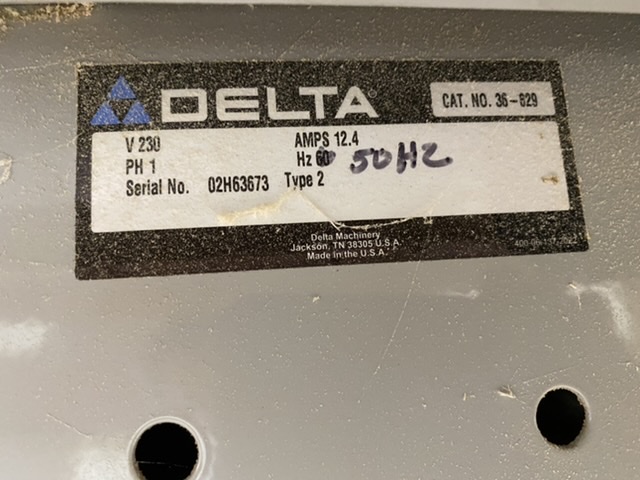 rkshop somewhere. As for age, really don’t know apart from he bought it for around 5 years ago.

Hi there
I have the same saw, older style Unisaw with Beismeyer fence. I bought mine second hand with the motor already swapped out for a UK 240v 50Hz 16 amp model. Mine came with the usual right hand extension and support rails etc, wheeled base, various splitters and guards, various blades, roller outfeed table and tennoning jig as far as I remember. I paid £600 about 12 years ago.

Ref the comment previously about the 2 cranked wheels, yours is the same as mine, one on the front and one on the side which was the norm for donkeys years, 2 at the front is a relatively new development. Your saw is a right tilt version same as mine, the newer ones are more often bought in left tilt these days. It doesn't come with a true riving knife but should have a long splitter somewhere instead, possibly with bear pawls, onto which the crown guard can be mounted, have a look round for that.

From the pic it look like you also have an EB3 mitre gauge worth about £100 new when I bought mine. The golden fence system is an after market add on by Incra and would have been pretty expensive if bought new.

Edit, the Incra fence on closer inspection doesn't appear to be attached to the saw, at a glance I though it might be there for a router in the out feed table, I would definitely look to sell that separately.

From your pics, it seems to be one of the 36- models but can't be sure which !
The manuals refer to a 36- 841 or 843, yet the saw plate shows a makers reference of 36-829 !!
It seems to date from no earlier than 2002 , so could be some 15 years old.
Maybe a google on Delta model numbers will confirm which one yours is ?
The serial number is shown - that may be a another way of tracking down the exact model you have
One place which shows similar Delta saws being used and taken apart etc is Matthias Wandel's channel on Youtube.
Think he has a similar single crank model too
Keep us informed as your research progresses.
I'm sure this should be worth well over £500, depending on condition. Have you had a look inside ?
P

Thanks very much for all the info guys.
I’ll have a look on the delta site and see what I can find.
Just want it to go to someone who’s going to use it and enjoy as it should be if anyone knows anyone who’d be interested.
The saw is up in Lancaster.
A

This is definitely the 36-829 as confirmed by the machine label and the base unit reference noted on the instruction manual front cover. For their table saws Delta employed a product numbering system primarily based on the fence type & length of rail supplied which may have caused previous confusion over the exact model number, but obviously you have the 36-843 package on your hands.

Given that this is a proper cabinet saw that looks to be in good cosmetic condition and assuming it still runs well (motor, bearings etc.), if you are still looking at selling I reckon £700 at a minimum isn't too unreasonable, plus you have a decent number of accessories to go with it. I would agree to sell the Incra fence separately as that could likely fetch a couple of hundred on its own.

These rarely come up for sale in this country and there'll be plenty of people who'd be interested if you go the popular auction site route. It's a shame you're too far away from me (Hampshire) and that I don't have a workshop to speak of at present otherwise I would have been very interested in making you an offer for it

Good luck if you do decide to sell.