What do you think of this then:

A chisel supplied with two handles so you can switch them when you need to whack it a bit or when you just need to give it a push.

I think the idea is logical but I'm not convinced. Suppose you'd been using the bashing handle for a while and it had embedded itself nicely into the ferrule. Would you want to take it out?

I think you are right.

I can't see the appeal of a chisel where you wait in suspense for the blade to fall out of the handle. Why do Americans use them so much? Or Germans for that matter.

it's a good idea in terms of economics, saves you having to get a second set of chisels, I do have a thing for socket chisels though, it has to be well executed though, I wonder how they'd hold up to serious abuse like site carpentry work?

I don't get it. I use my chisels with both my hands and with a mallet. The handle suits both. Why the need to complicate matters?
T

Looks like an accident waiting to happen. But mostly just pointless. And a silly price.
O

It's called marketing. Idea is to sell you things you don't need.
Regards
John
A

If I recall, Lie-Nielsen's Bevel-edge chisels, (clones of one of the old Stanley designs), were offered some while ago with a short handle and the option of a longer one, supposedly to make the chisel suitable for 'paring cuts'.

These chisels have their sockets machined so that the handles are interchangeable.

Contrast this with the removable socket handles that journeymen carpenters stowed in their boxes. I have a few of these old chisels and many of the surviving handles were little more than split stubs when I got them. As their original owners probably did, I replaced them when I restored the chisels to use. I don't do any big framing any more, but I did keep the old stubs.
However, I quickly found out that most of the older chisels had forged sockets; not necessarily symmetrically round or flat inside so that the handles weren't intentionally interchangeable as the new L-N ones are.
These older sockets would also release their handle stubs quite readily. In one respect handy for stowing, in others a pain when they came out at the wrong moment and this would explain the quantities of sand that I found in the base of the sockets of one pair of chisels, all from the same owner. I concluded that he put some sand in there to provide some sort of friction. This must have been pre-war...... don't know which war though, those chisels were quite venerable..... may have been the Boer War.

I was responsible for the L-N long handles. They made the chisels more like a Japanese long handled paring chisel.

The long handles give the user greater control of angle. An 1/8 inch sideways movement of a short chisel is a larger angle than a long handle moved 1/8 inch.

astronomically high price unless something has changed with those chisels (the brand).

Early on, I had two spec sets of their chisels - one for mortises, and one of bench chisels. They were relatively inexpensive and tang type (honestly, a more useful profile than a socket construction type chisel for anyone with a little bit of experience).

The steel was disappointing - it may have been spec hardness - I'd have had no way to tell at the time (61 hardness was the spec). I sent both sets back - something I almost never do. The edge retention and feel of the steel was just kind of average modern chrome vanadium consumer steel-ish feeling.

Actually, the last thing that I had that reminded me of the same feel was narex chisels, but narex are inexpensive due to a different hardening process that limits how hard they can be made but saves on follow-up (post-hardening work). Their low price makes their mediocrity forgivable.

Those handles come off of a duplicator lathe almost finished. It's possible that someone may sand them by hand in situ for 10 seconds and rub a light finish on them - the cost of the extra handle is practically nothing, and the complete lack of any side lands (a very small land is preferable to none) will make for fragile corners and cut fingers.
D

I just checked their regular tang chisels - they're about a fifth of the cost.

I'm aware of the extra cost to grind, but call me suspicious about their edge holding vs. their regular chisels. Someone who thinks they want :dovetail: chisels can just take some of the regular types and round the sides on a belt sander or coarse sandpaper (I generally have ground cheap chisels for socket work but over time have learned why you don't see many historical chisels like that - it's faster to do half blinds without any of that nonsense -paring into the corners with a "normal" chisel and keeping a narrow chisel on hand (just a regular square chisel) to snip the back corners of end grain off cleanly without punching too far into the backing wood) 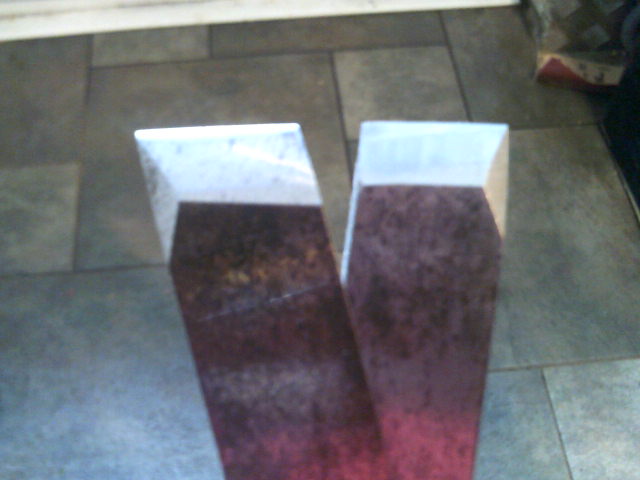 or spend £1 at a car boot for a pair of Diamics (A. Hildick) and grind them to suit yourself.

AndyT":3fd3t4aw said:
I think you are right.

I can't see the appeal of a chisel where you wait in suspense for the blade to fall out of the handle. Why do Americans use them so much? Or Germans for that matter.
Click to expand...

I do tend to agree Andy. Although not Lie-Nielsen, I have tried the new Stanley's out and actually sold them to a chap at work. They were more comfortable than I thought and would be fine to work with. No loose handles either.

I must say though I can't resist something that just needs a bit of work and when finished is equal to, if not better than the previous brands. A recent case in point. 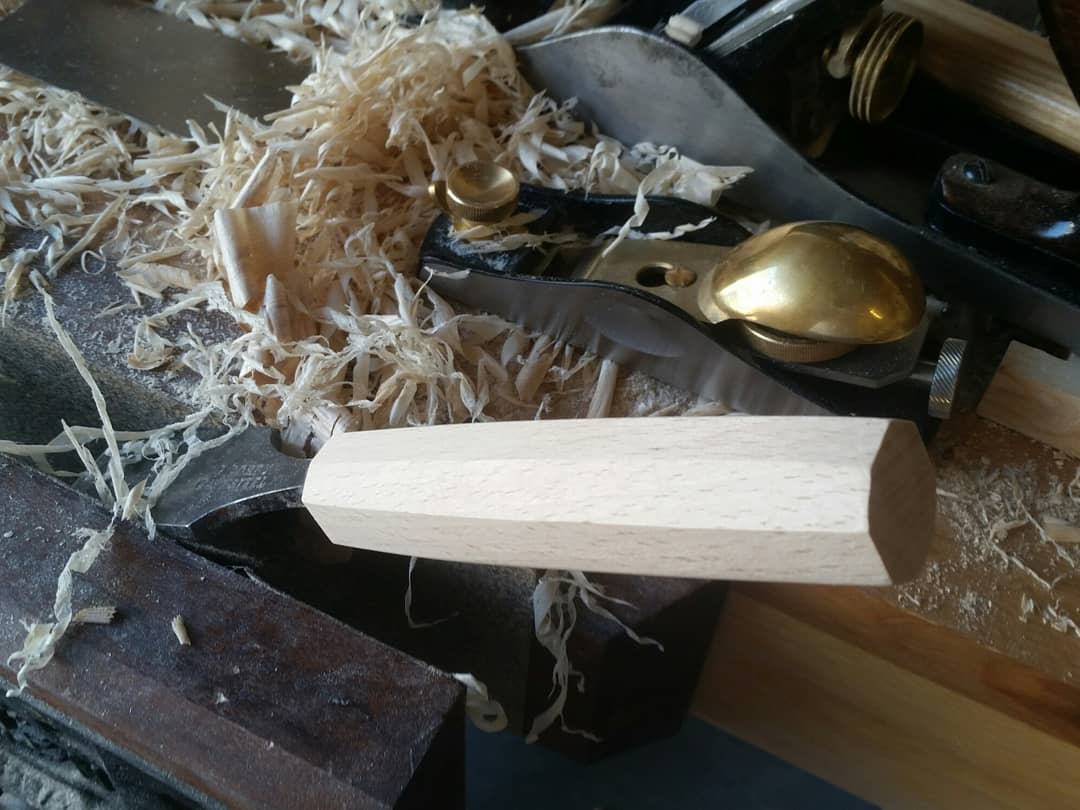 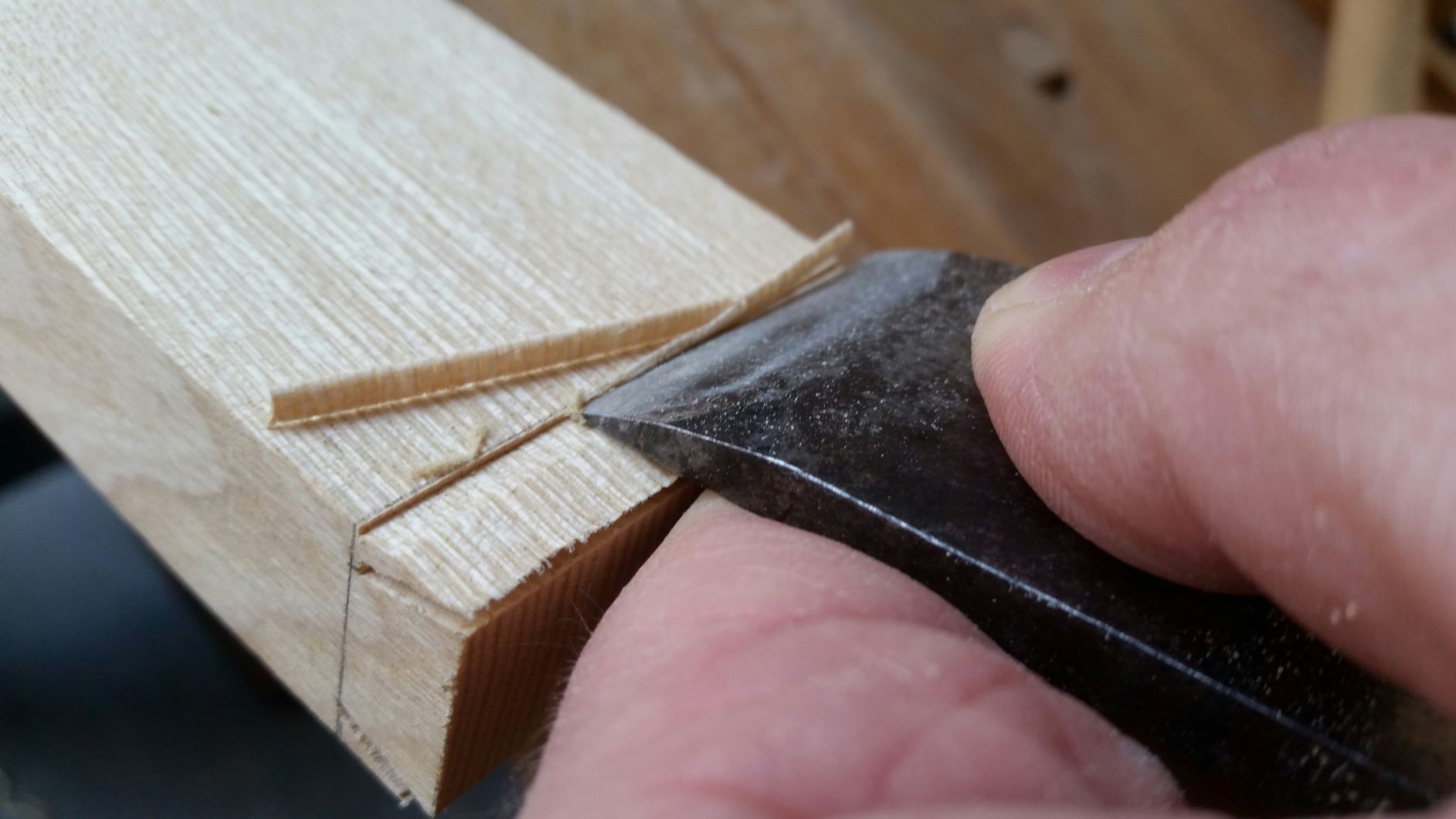 AndyT":k35sc6tr said:
I think you are right.

I can't see the appeal of a chisel where you wait in suspense for the blade to fall out of the handle. Why do Americans use them so much? Or Germans for that matter.
Click to expand...

they were generally construction and architectural types over here. I'm guessing the answer had to do with site use early on and after that, probably because it was easy to swage the socket on construction chisel types (like stanley 720 and 750) in an industrial setting and drop handles in them that came right off of a duplicating lathe.

I couldn't comment much on chisels used for cabinetmaking as I don't think small shop cabinetmaking lasted long here once factories came in. I've got a stone from a trade carver - it's a washita stone. In it, it's marked 1914 that with the name of the owner - in indiana (not exactly new york or san francisco). It states that worked his working life in a factory as a carver (a factory, not a shop) and that the stone was his stone for that job - around 1914 when it was marked, he had been promoted to salesman and left skilled factory work.

(Socket) Chisels on construction sites probably lasted much longer for door work - trade (union) carpenters are still required to buy a set of chisels here in the states, though I talked to one once and he said something about them being dull because he hadn't sharpened them in 15 years).

Maybe we had a tang chisel resurgence once it became common to put a full length tang and steel cap on construction chisels!

Lie Nielsen's chisels are made in a CNC rotary lathe as far as I know. I think it turns the chisel and then cuts the profile of the chisel - not sure why they chose the 750 as a pattern - perhaps because it allows the use of a duplicator lathe and no real handle fitting.
You must log in or register to reply here.