It started with Fiddler and a screwed up bottle of PVA. He also makes bandsaw boxes. I showed a couple of mine and he suggested a seperate thread.. Yer-tis..

They are easy to make and the only restriction is your imagination. small off cuts can be used too.. A small bit of yew, about 6" high

An oak money box. A birthday press for a friend called Joy

I have made most of the letters of the alphabet and they sell well at craft fairs. I have photos of loads more I have made, so,

Very nice. I keep meaning to give these a go, but never seem to get around to it. Where did you get the technique from?

My contribution so far: 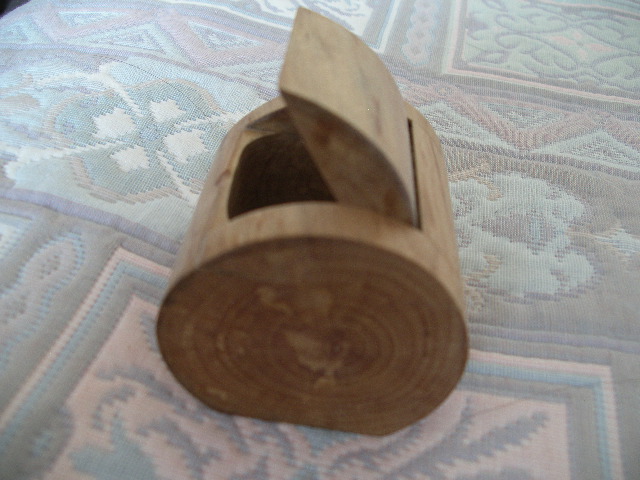 I started with "Making Wood Boxes with a Bandsaw" by Tom Crabb, but as far as I know it's out of print now. I made my first ones about 15 years ago. Crickey, don't time fly when yer 'avin fun :mrgreen:

I showed this one on Fiddlers glue thread, but what the hell. It was made as a commision for a wedding pressy for a couple in Aussie called Chris and Kyelie. It either stands together

Made from a single piece of pirana pine and as always cut with a 1/4" 6 skip blade. The top of the "C" is about a tight a radius as I can cut with that blade..
W

something i made last year from maple 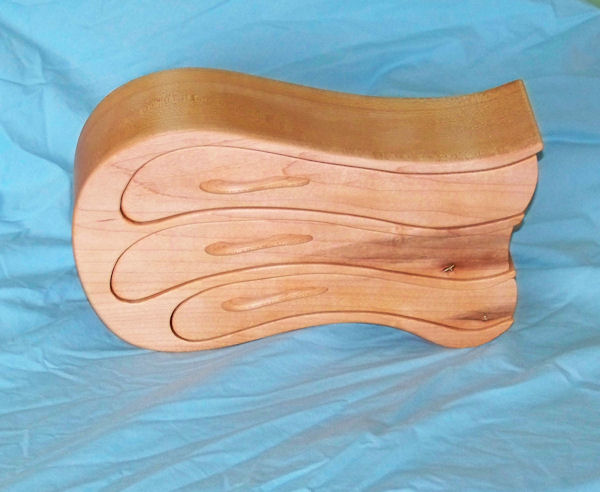 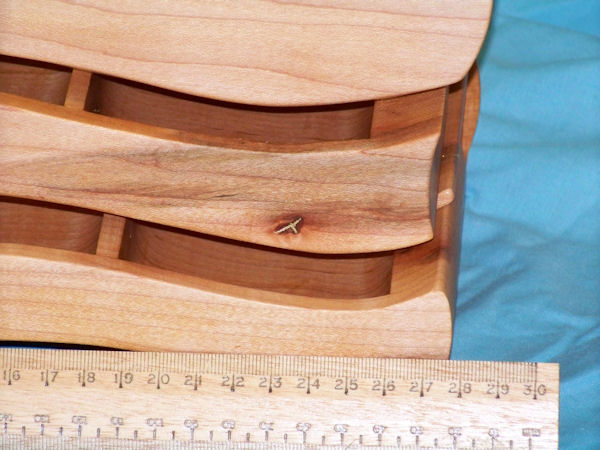 i put some gold leaf in the flaws

great bandsaw boxes guys! I've only just got my bandsaw, very much looking forwards to making some of these. My bandsaw only has a 8cm depth cut so i might be some what limited.

Well here's one I made

I've made a couple of variations of the same box and am currently toying with some other designs. I have made a variation of the above box incorporating a secret drawer.

I posted it over on the Projects forum here back in October so some may remember it. I got the inspiration from a youtube video.

John, I think your boxes are great and certainly an inspiration.

Woodaxe and Brian, those are lovely examples of what can be done.

Brian, that looks like a rather nice piece of elm and WA the simple lines of that box go well with the maple. It's very ellegant..

I have had a bit of maple for years and looking at that I feel a box coming on!!

It's funny I have been watching woodworking videos on youtube and was checking out bandsaw boxes because of this thread. I recognised Brians as this one.

The guy seemed a bit annoying at first but it is quite a good and clear demo on how these boxes can be made quite easily.

Check out some of this guy's boxes. Very nice.

Yes stevemarin does seem like a bit of an odd ball at first, his videos grow on you though.

I'm going to attempt one today, I've no wood glue yet though so that is also on the list of things to do!

thanks for the link knappers.
S

This a five year old post of my bandsaw box and I've been meaning to do some more, the images have dropped off the post - oops. I'll go back and edit the links (but I've got to do the boxing in the bathroom first)


Picasa Page with the pics
https://picasaweb.google.com/seantheunwise/BandsawBox?authuser=0&feat=directlink

I really do like making money boxes and they can be made quite special with some pyrography.

And this mouse was posted on Fiddlers thread too

Some fabulous work up there. I'm still finding my woodworking feet so I started with something a tad simpler. 'er indoors loves them though. All made with scraps laminated together, because I'm a skinflint! :lol:

Bodge, you sound like a man after my own heart. Excellent work, I'm off to rummage through the firewood pile!

Jonzjob, thanks for starting this thread. Hope to include my first boxes once they are complete, the standard is so high I need to work hard to match these!

Those are delightful Bodge! It's no wonder SWMBO likes them!!

Most of the finishing on my boxes are done with the 3 Carrol drum sanders I have. Mounted in my bench drill they work a treat. Dust collection is done with an old Electrolux wet/dry vac bought new for just that job about 15 years or more back. I have a short length of 2" plastic pipe held close to the sanders with a simple stand and Jublee clip so it can be slid out of the way easily.

The advantage of the Carrol sanding drums is that you don't have to keep on buying expensize sanding drums for them. You can put whatever abrasive you wish on them..

I saw the Carrol drums on the Axminster website and was taken with the idea of using whatever scratch I had about, but again being a skinflint i didn't want to pay that much for them. So, I made my own! An old chunk of table leg roughly cut into a cylinder on the bandsaw, a length of M10 threaded bar tapped into the centre, glued with CA glue and secured with a nut and then the whole lot mounted in my drill press and shaped with a rasp and sandpaper. A slot cut into the side houses a length of old junior hacksaw blade to stop the paper falling off. Works a treat and the total cost, well zero as it was all lying about in the garage. I love being cheap! :lol:

Do you have any pictures of your dust collection setup John? I need to address the problem for myself and again, I'm a skinflint! I have a Vax wet and dry vac to start with, it will need to be replaced with something more suitable as funds permit, but for now I need to mackle up some sort of system.

Your wish is my command :shock: :shock:

The chuck is locked down near as far as it will travel, it is a nice comfortable height for me.. Simple, but effective. I really must check to see if the vac needs emptying sometime too?
L

Very nice and simple solution! I tried a couple of boxes yesterday... They look monstrosities compared to all yours haha.. I think I need a 1/4 blade back on. I'll post some pics when they're finished. What blade sizes do you all use?
W