Back on the tools and workshop ramblings

So after a good 10 years off the tools full time I find myself heading back down that road again after leaving my job last year. However unlike the last time when I worked as a joiner, mostly on site framing and plaster boarding, Im heading down the road of custom furniture builds and interior storage, or at least that's the plan. Even with all these life changing events happening just now which I think will become the norm, possibly for ever, Im determined to enjoy my job and keep a good work life balance which is something I got really wrong in my last job. Ive probably picked the worst time to go self employed but I have a very supportive wife who makes a handsome penny and once this lockdown ends Ive got a fair few jobs in the book to tick me over and get the ball rolling again.

So with that in mind Ive been in the workshop this last week and a bit sorting out tools and building a new bench. 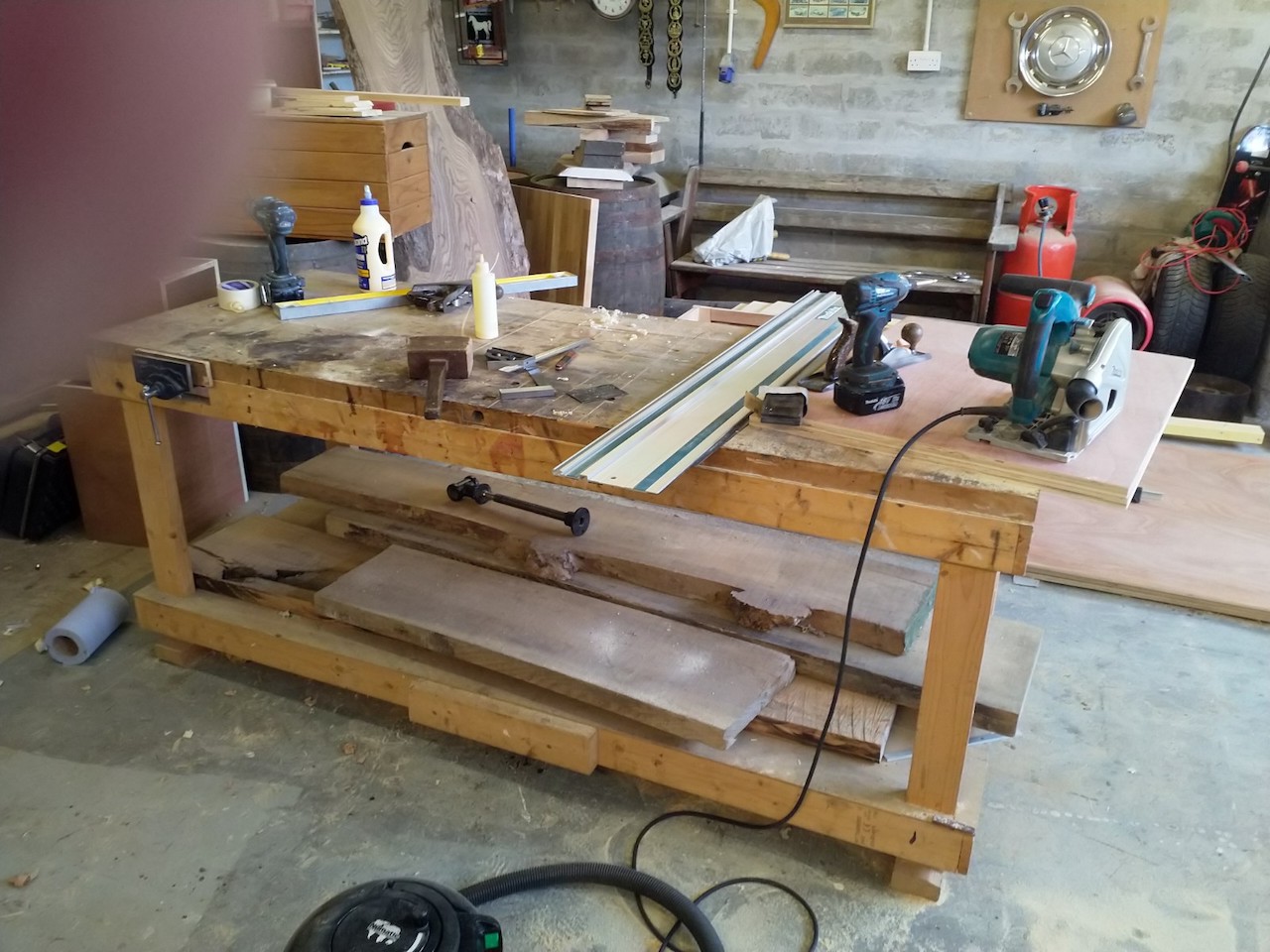 Inspired by VE Day and a bad back from the assembly bench which I find to low for hand planing plus its absolutely filthy, I decided to build a British style bench ( sorry as a Welshman living in Scotland I couldn't say English bench). I had a heap of CLS lying a round which isn't ideal for the bench but all i need is comfortable, heavy and cheap just now, plus I didn't want to eat into my good stocks for a bench I might end up not liking. So i Decided to hand plane up the timber and laminate for the legs which finished at 80mm x 80mm 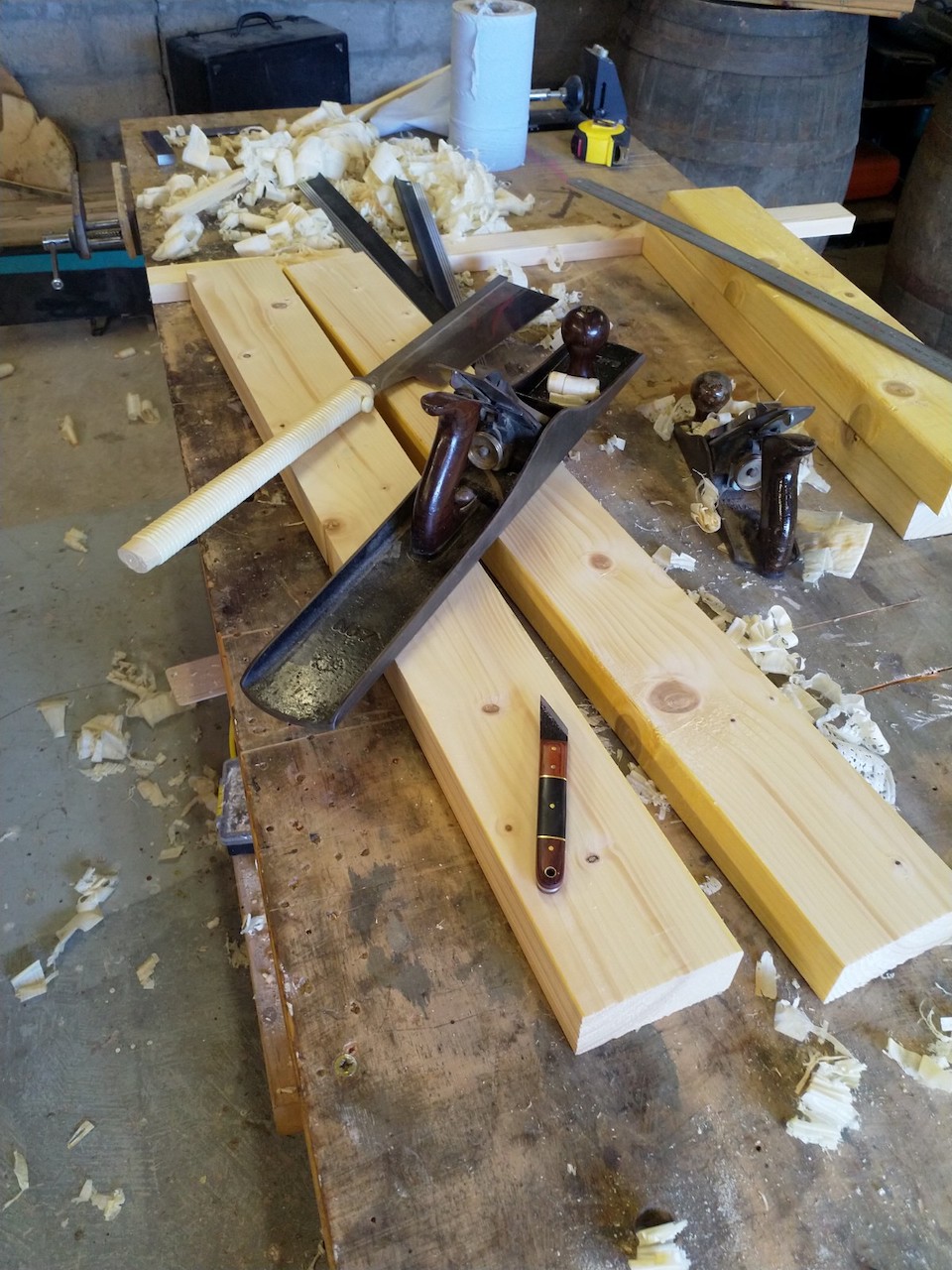 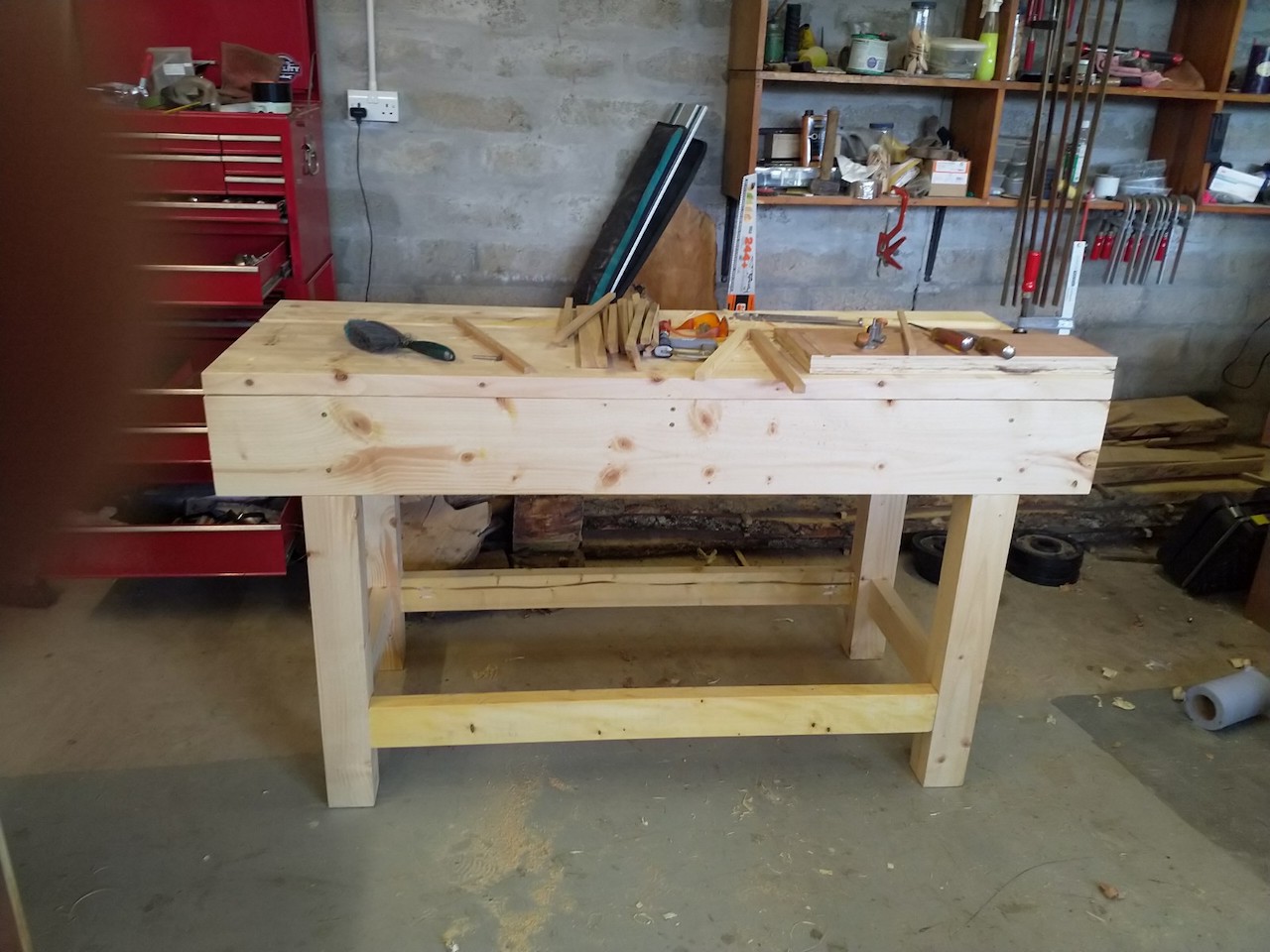 I forgot to take more pics as i went along but the top is 3 boards wide, but off the top of my head i can't remember the individual sizes but the whole top is 1700x 600 with a small gap for chisels etc 2/3rds across. I'll get some closer pics if anyone wants
I went through all the usual stuff that's been done time and time again to get to the end result but did come across a few things id have done differently. Firstly i don't think its heavy enough so I decided to add the two long rails to the legs today and Ill put a storage shelf in for timber to weigh it down. The weight I guess is down to the material density which is pretty scarce even 95x45 which I used for the legs and the 195x45 which I used for the top it lacks substance, but I'll re do it in a few years with something more substantial and prettier. Also a wider apron which I think would've taking out some of the racking but either way its solid now Ive added the long rails. At some point this week i'll add a vice or 2 and some dog holes to finish it up.

Next was a table saw tune up 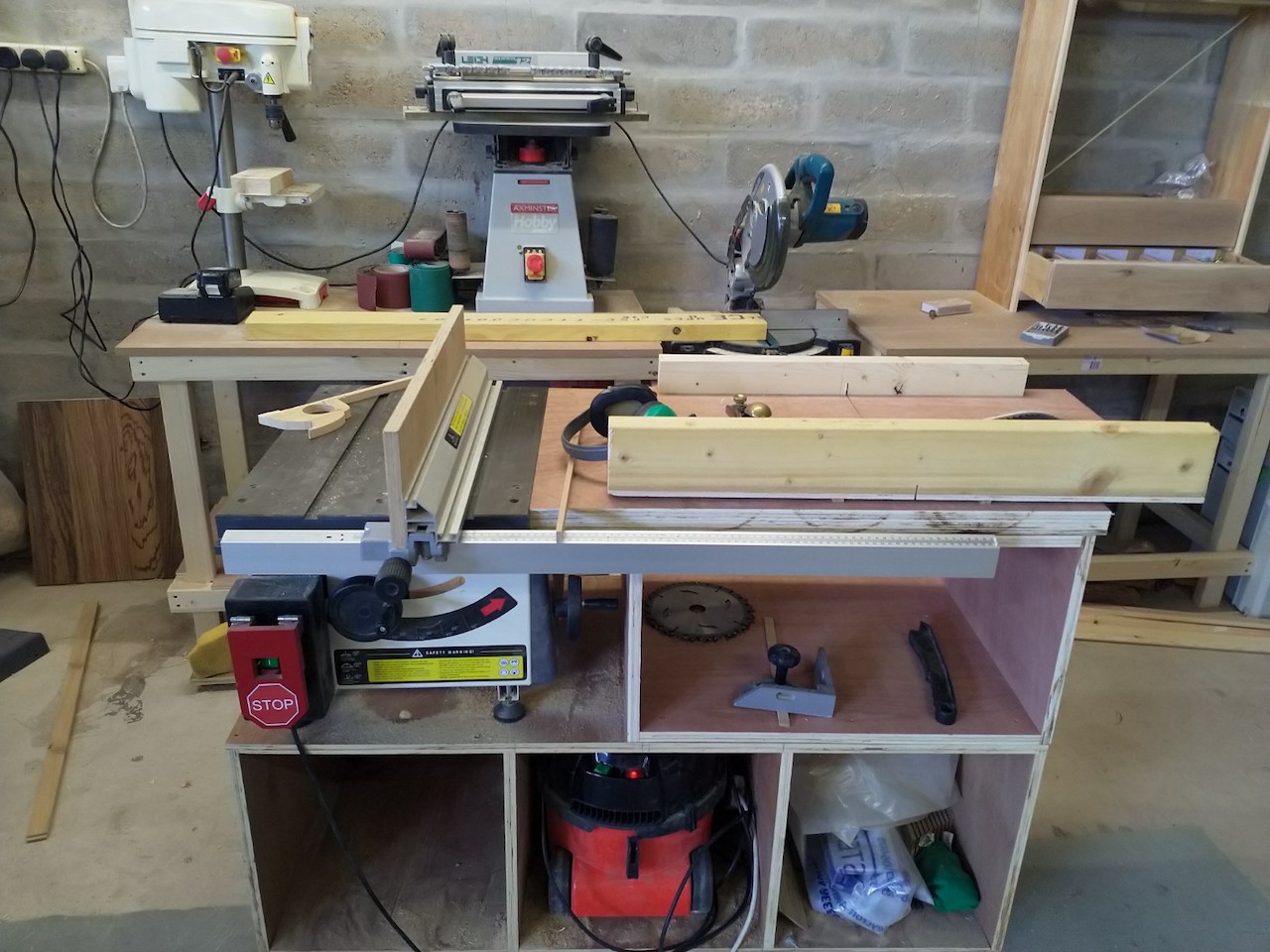 I picked up a 2nd had Axi TS200 a few years ago for a couple small house jobs but never bothered to spend time setting it up. Until now, Firstly was adjusting the blade to run parallel with the T tracks and moving it over enough to get a full 45deg tilt which it wouldn't because it was hitting the top at around 30 deg. 2-3 hours later it was the fence which took 10 mins and a business card shim and It was cutting perfect. The Ply cabinet I've used for years, nothing fancy and not yet finished but it serves me well enough. Ill make some drawers for it over the coming weeks for some drawer practice.

Then it was on to a crosscut sled, not the all singing and dancing with t tracks and clamps and bells and whistles which have infected my brain by watching all the woodwork guff on youtube over the lockdown, but a very simple sled where you eyeball the pencil line and cut. Although I could see it was square with my shiny new Starrett set Sq after some adjustment, I decided to try the 5 cut method, again something I never head of until youtube, so I followed the process which ended up with a heap of zeros before any numbers which I figured was good enough, also because the new Square is perfecto.

Next up a new shooting board, nothing too fancy but I did find a link on here to a FWW vid i think it was where a small length gets housed into a dado and the actual stop block sits on top and can be removed and slid across to be trued up again and again. i cut the dado by hand and used my new Quangsheng router plane to cut the depth and glued in a scrap ready for the main stop block which I'll cut over the weekend.

Very much enjoyed, we all need inspiration.

I followed a similar career path to yourself and have now also returned to my trusty bench.
Best time of my life really, which I consider to be most fortunate, without forgetting those who are less so.

Excellent! Lot's to get stuck into reading through that lot........two or three threads-worth in one post! Just a quick reminder to do the back-to-back squares trick with your shooting board to check that the two levels are on parallel planes. I know to my cost that it isn't automatic that they are.

Good for you Trigs. I'm a believer in fortune favouring the brave and know quite a few people who made life and career changes (some forced and some not) at the financial crisis - all have done well.
T

Cheers guys, yeah there is a lot but I know how in reliable I am and taking pics but maybe I'll just have to start and throw out some new project threads


MikeG.":1v2ridkg said:
Excellent! Lot's to get stuck into reading through that lot........two or three threads-worth in one post! Just a quick reminder to do the back-to-back squares trick with your shooting board to check that the two levels are on parallel planes. I know to my cost that it isn't automatic that they are.
Click to expand...