Anyone checked the accuraccy of their digital angle gauge?

I bought one a while back, but it's miles off for anything other than 90 degrees. Total waste of money (n.b.: I didn't buy it from Axminster, nor is it the Gem Red brand).

I'm trying to find out if I just got a duff one, or if other people have had similar problems. My guess is that they're actually nothing like as accurate as claimed, but that few people actually check!

So if anyone else is as pedantic as me, please post your results!

PS: I've a feeling I posted about this before - if so, apologies and just ignore me!

That's lined up with my 20 degree bed on the chariot.

It's a GEM RED brand.

eric
i have the trend brand and have just tried on my new bahco combination square and it is spot on at 45' and 90',
hth dave

Just tested my Gem Red and it's spot on.
E

I've done a systematic test, which I"ll write up this evening. It seems that when mine is right it's perfect, but sometimes it loses the plot completely.

Eric The Viking":1gitbe9e said:
Thanks guys.
I've done a systematic test, which I"ll write up this evening. It seems that when mine is right it's perfect, but sometimes it loses the plot completely.
E.
Click to expand...

When I first had mine (couple of years ago) I experienced that sort of problem at times. I changed the cell for a new good make one and all has been fine since.

I think they all use slotted disks so it could be dirt or the sensors failing.

'Just tested mine (TREND) against the incra 1000se mitre gauge ,picked out A few random angles and it was spot on.

Sometimes mobile phones,micro waves . .so on can affect digital readouts. I have A small set of digital scales that go haywire if near the phone.
E

pswallace":3bgok3ty said:
'Just tested mine (TREND) against the incra 1000se mitre gauge ,picked out A few random angles and it was spot on.

Sometimes mobile phones,micro waves . .so on can affect digital readouts. I have A small set of digital scales that go haywire if near the phone.
Click to expand...

Thanks to everyone who checked theirs.

If I had to sum mine up in a word, it would be "inconsistent." Not being blessed with an Incra mitre gauge (wrong mitre slots, etc!), I printed out[1] a range of angles onto A3 paper and checked against that. 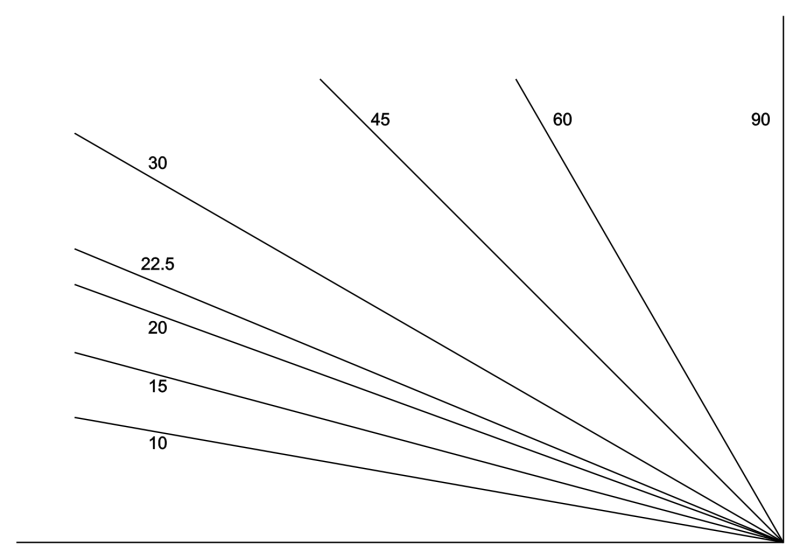 Mechanical issues
The two arms of the thing are not identically sized. The upper one is narrower than the bottom one: 34.7mm compared to 35.1mm (+/- 0.05mm). At the hinge, the difference is split between the two sides - asymmetrically! Thus neither side can be zeroed against a flat surface.

I haven't tested it with obtuse angles, partly because of printing difficulties, partly because I'm unlikely to use it that way.
I've tried four, different, nominally good batteries in it with similar results[2].


So I think I'm giving up on this unit. It's evidently a cheap copy of something like a GemRed one. I'm still undecided about replacing it, but I'll look at the build quality of Trend and Gem Red, and possibly take my piece of A3 to the shop when I go!

Thanks for everyone's inputs.

[1] This isn't as rough as it seems. The lines were created in Corel Draw, which is a vector drawing package with a nominal angular accuracy of 1/100 degree, and printed on a laser at up to 1200dpi - far higher resolution than I can see with the naked eye these days! For 'ease of use' I made the lines 2pt thickness (it will do much thinner, but they get very hard to see except in really bright light). The image above is a rendered and scaled version of the original. To print it, I sent it directly as vectors from Corel Draw - the laser rasterized it, thus minimizing any floating point/rounding errors.

[2] The brand new battery was better than the lowest voltage one (still within spec). This may be due to the RF interference PSW reports (above). I've yet to try screening the thing (a bit tricky, but probably possible) and repeating the experiment. It has a flat metal surface in proximity to the circuitry, which may alter its susceptibility (could go either way, depending on the frequency involved and the direction it's coming from.)

[edited after a second coffee, to improve legibility, etc.]