I have a single car brick built garage for my workshop and as it is next to my house and neighbours I am keen to keep the noise generated by my sawdust making activities to a minimum. So the bostitch compressor has a noise level of 97dB @ 1m, which really makes it a problem. 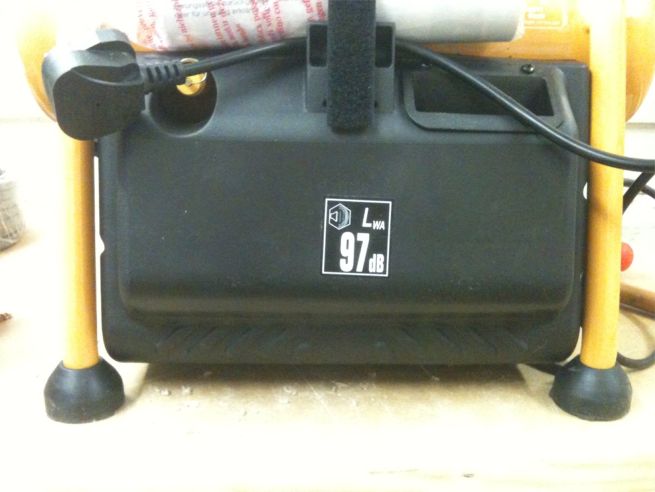 So I figured I would make a well ventilated box to contain some of the noise being generated.

I had a a space under my workbench that could accommodate the box and I wanted it to be mobile. So I started with the base and added a inlet path to the underneath of the base where the air will be coolest. As you can see from the pictures I have added baffles and carpet strips into the air inlet section to try and reduce the escaping noise.

I would also like to point out the entire box was made out of scraps I had lying around the workshop and took a weekend to make. 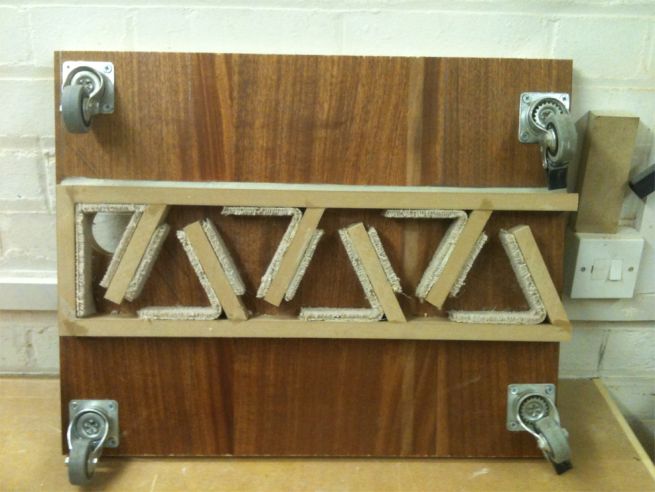 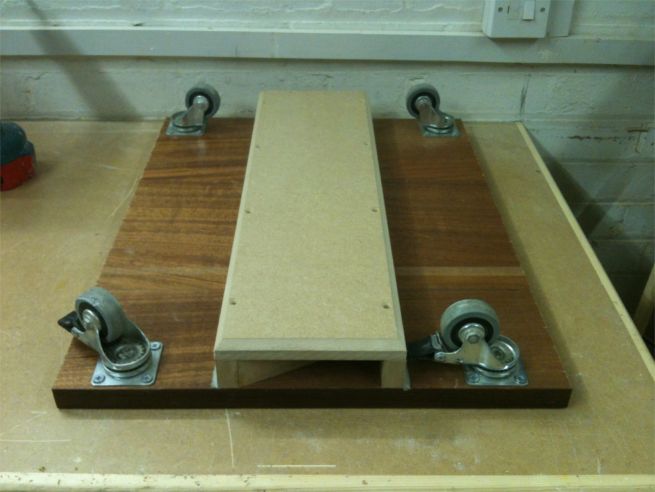 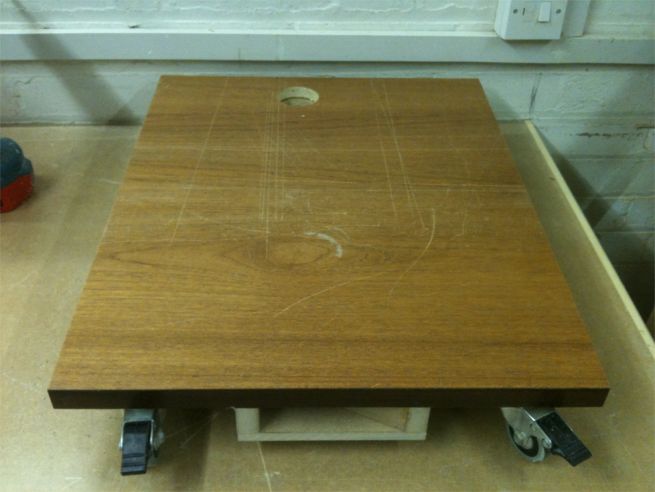 Next was to construct the sides, back and a top exit path for the warm air. I used a bathroom extractor which is wired up to run run continuously when there is power to the box. 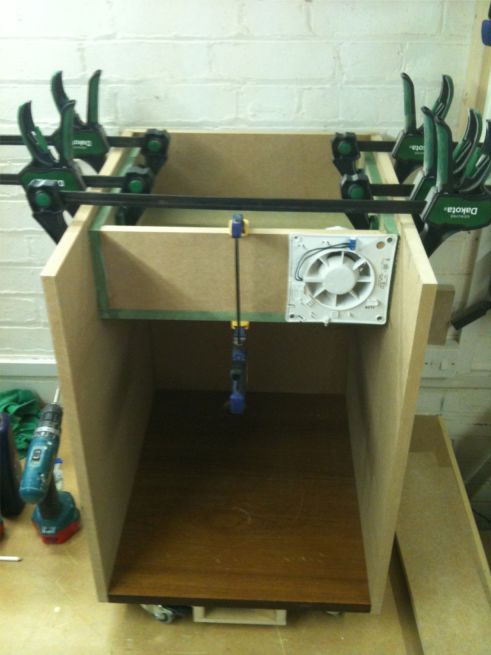 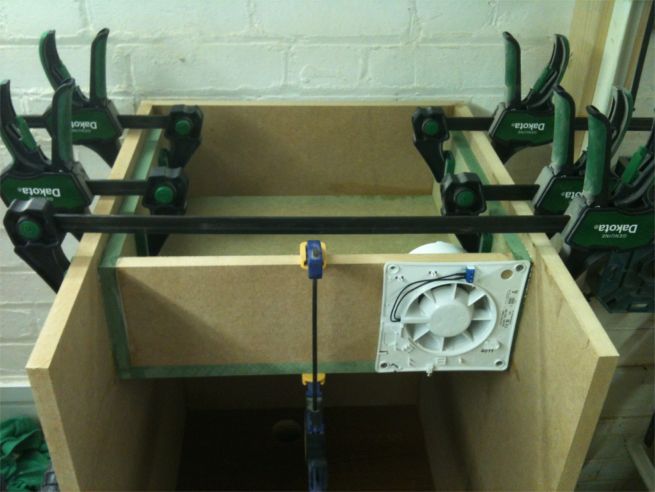 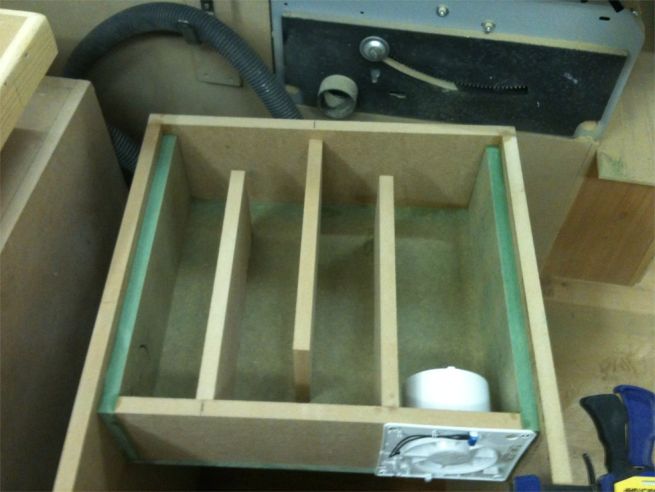 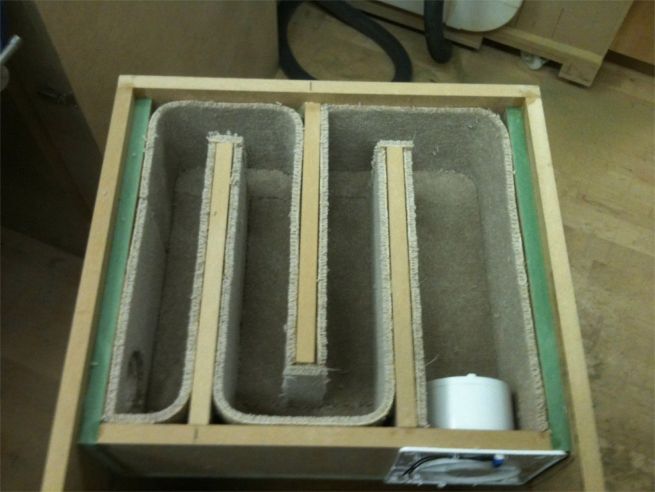 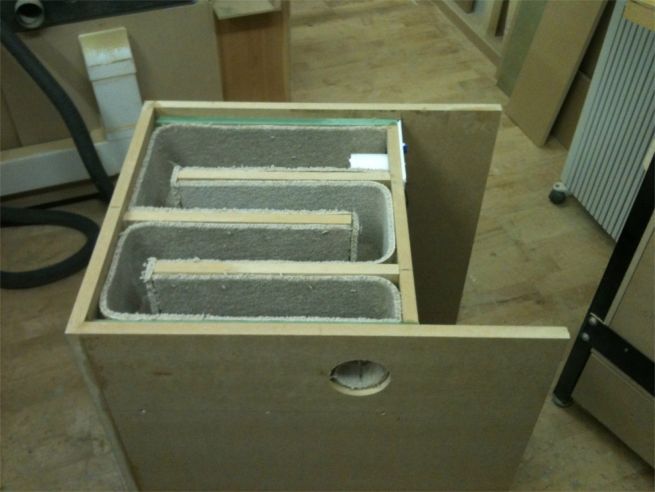 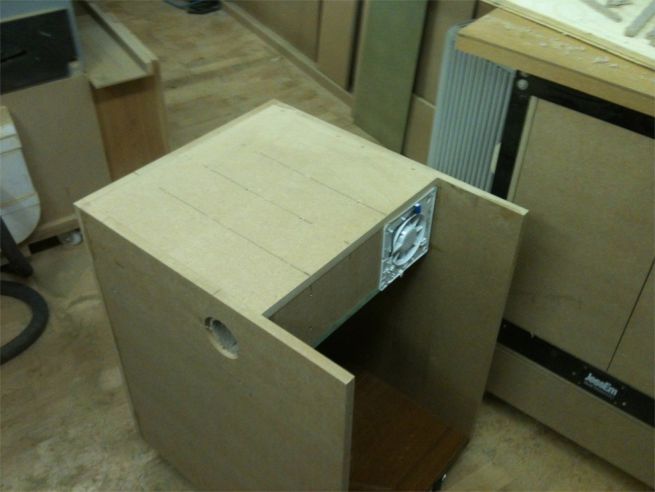 Hope it works .....as i would also be interested in lowering the noise level of a compressor
H

As promised here is part 2.

As I am paranoid by nature I also added an extra baffle over the cool air inlet coming into the box, whilst being careful not to restrict the cool air coming in too much. It really is a case of suck it and see.... literally. 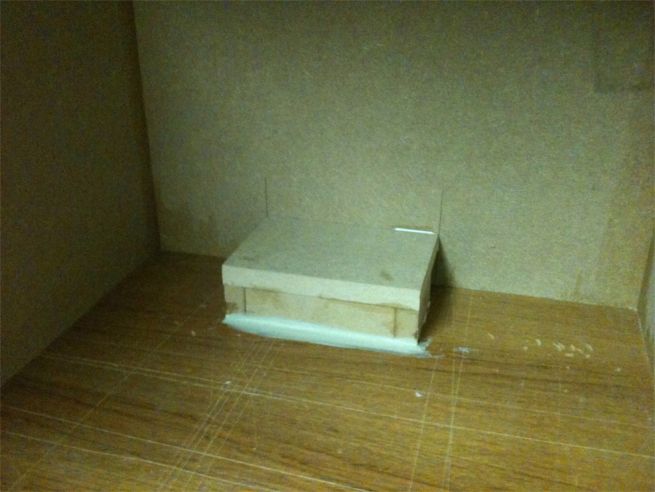 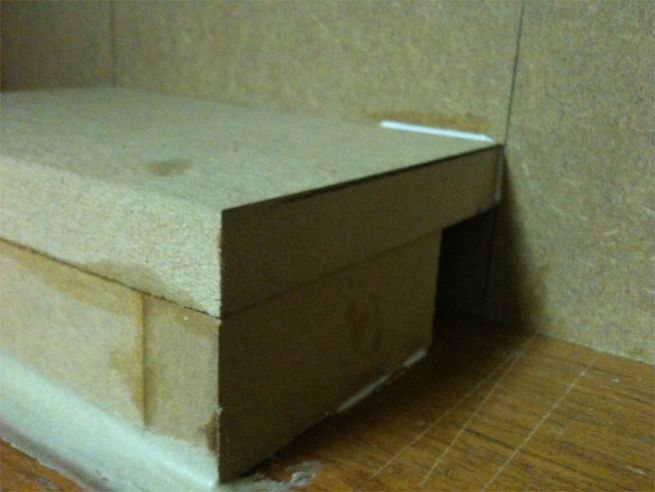 Ok, now to do the electrics. I put a double socket inside the box which is connected to a fused switched spur on the front of the box, which I plug into a socket under my workbench. So this means I can simply turn on the switched fused spur which powers the double socket inside the box with the extractor fan and the compressor plugged into it. This is a good safety idea as the extractor is always on and pulling out warm air from the box when there is power to the compressor. The extractor fan is good for 90 cubic metres an hour and cost me £10. I should point out it isn't a timer fan just simply on or off.
Also I carpeted the inside of the box to reduce noise transmission. Easy enough to do with a bit of gripfil on the back of the carpet and a few staples for safety. Looks like the back of my old van back in the seventies....shagadelic. :wink: 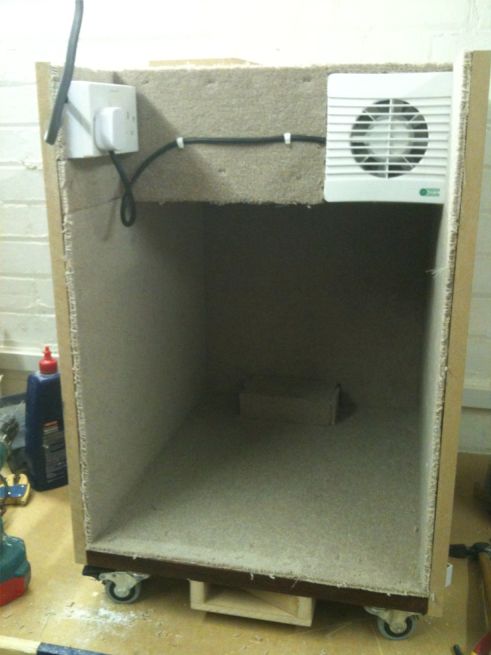 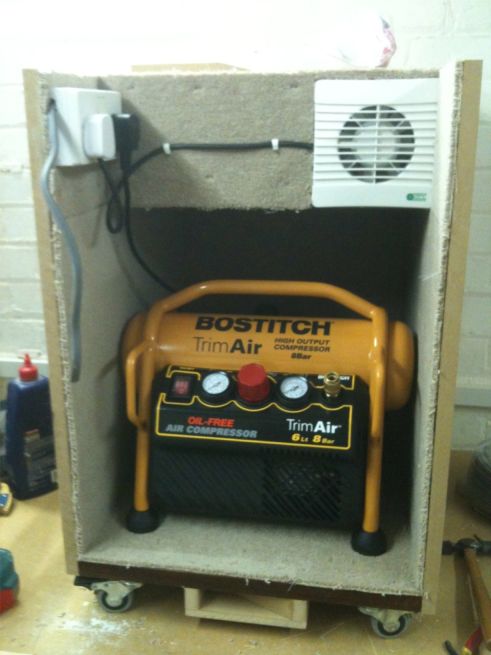 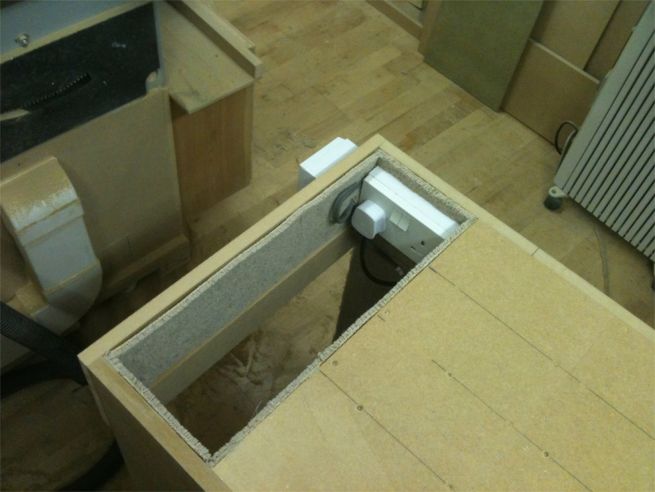 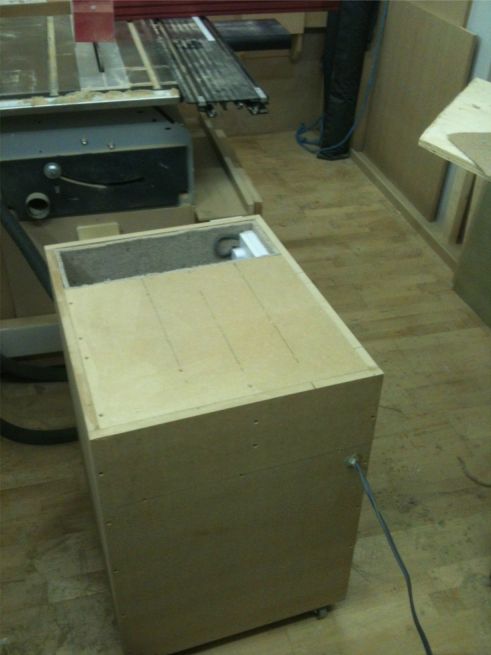 Last thing to do was add a top to the box and also a front access panel which is held on tightly with toggle catches for easy access. I didn't want to use a hinge as I was concerned about small gaps which would reduce the noise suppression.
Also drilled a hole in the front fixed panel just large enough to pass the air hose through. 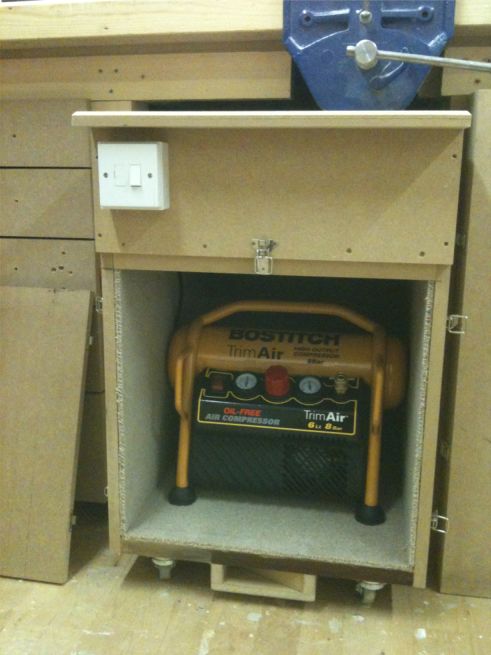 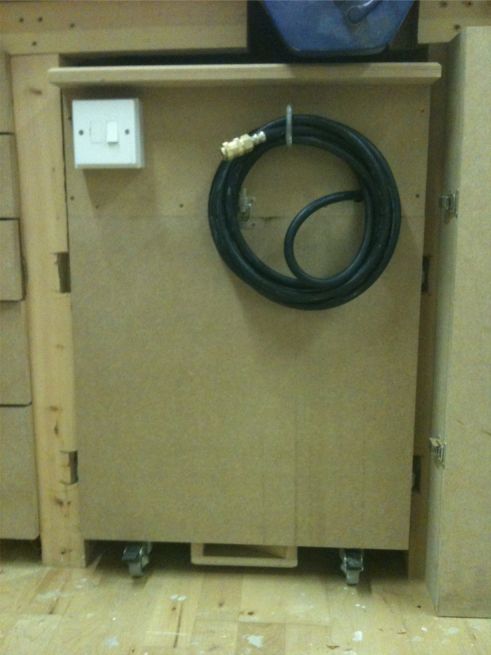 I downloaded a free noise meter app for my iphone and the reading was a reduction from 97dB down to 74dB. I can now work in my workshop and when the compressor kicks in I am able to still hear my music, have a conversation...... no problems.

Hope you found this useful.

I like it! I always found my compressor far too noisy, never even crossed my mind to box it in.... saying that it was a 100L one

Result! I like the idea of the electric fan so the compressor can be thoroughly enclosed.
Does anyone else remember the "acoustic hoods" that people used to have on noisy dot matrix printers in offices back in the 80s? I think this is better!
R

My neighbour coould do with one of those.... leaves it on all the time... got up the other night 4 in the morning and it was doing it's thing!!

granted it's in a big shed and isn't really loud, but our room is at the front of the house... what about the houses with rooms at the back which are all around the shed!
H

Just an update on how the compressor box is shaping up.

I had run out of carpet and had not done the inside of the front cover or the top inside when I first posted up the build. I have since done this and it has dropped another decibel taking it to between 72 to 73dB. So I guess carpet does work when used in the right circumstances for noise suppression.

I have been using it a fair bit today and the compressor is staying nice and cool with the extractor doing its job of removing the warm air.

One added benefit I didn't really appreciate about having a compressor is the ability to blow dust off surfaces and all the nooks and crannies in any workshop. My workshop is cleaner now than it ever has been.

Lastly, I am very thankful for all the positive responses I have received and hope at least someone is inspired to make something similar or better! :wink:

Are you getting any significant sound "leakage" around the hose?

When you need to drain the condensed water out of the tank, do you just pull the compressor out of the housing?

I have just had a listen to the hole area where the hose comes out and I couldn't pick pick up any additional noise coming out of there. I was concerned about this at the time but made sure the hose is hugged by the carpet attached to the piece behind.

Yep, simply pull out the compressor and drain. Simple for me with a small compressor like mine, perhaps with a larger compressor some sort of access flap would have to be introduced.

regards
Howie
You must log in or register to reply here.

Compressors - will this one do?