but at least there seem to be no cracks or chips around the mouth:

For this job, I used Micromesh - another tip from Jim. Apparently it was developed for grinding optics and suchlike; for me, the key features are that it seems to be everlasting, and the amount you remove is easily controlled. I bought an assorted pack of small sheets on eBay, and so far I have only used two sheets - one fairly coarse and the other one fine.
It's washable - under the tap, or leave it in your pocket and put it through the machine.

Here is the plane dismantled; I've rubbed it hard with a coarse rag, but it's going to need a bit more than that.

Here I've used the coarser grade, wrapped around a cork block and lubricated with a quick squirt of WD40:

I then wiped the slurry of rust and WD40 off with a rag:

It's then just a question of doing this all over. To get in the nooks and crannies, I just wrapped the micromesh around a stick or my finger. Having gone over the plane once, I switched to the finer grade and repeated.

This got it nice and rust free and smooth on the working surfaces but took off almost no steel. The difference with this abrasive is that it seems to give you lots of control over how much you remove; you can just stop when you like the look of it, without leaving scratches.

As an experiment at this stage, I used a smear of MAAS polish (available on-line or from Lakeland kitchen shops) - this did darken the cloth so must have removed something; I think it probably helped in getting the rust out of the bit of pitting on the side.

To finish off, I gave the plane a quick once-over with the Renaissance Wax to prevent any further rusting (and make it nice to handle) and to buff up the rosewood wedge. I also sharpened the iron, which looks as if it has been cut down from a bigger one, but quite neatly.

Here's the finished article, complete with shavings - I hope you'll agree that it now looks like a tool which has been properly looked after, not one that has been neglected.

and as a bonus the maker's name is revealed (alongside some old hammer marks!)

I have one of those...or rather Douglas now has it...

Slater made a lot of castings for other "makers" like Tyzack...and rebadged them...great old company!

One tip with the MicroMesh...go up through the mesh if you can...1500M (coarse) to 12000 (ultra fine) leaving no grade out and do less each time and you will get the same result only smoother.

You don't feel that you are doing anything with the intermediate meshes but you are.

BugBear
...a sharp tongue is the only edge-tool that grows keener by constant use.
-- Washington Irving

Diesel? I am more of a petrol man my self, but if it can be used for tool cleaning then I supose it has a use

Jacob wrote:I use wire wool and linseed oil. I know it sounds a bit pathetically low-tech compared to "'micro" this that and the other but it works really well. What is "micro crystalline" wax BTW and how is it different from (superior to?) other waxes?
It has to be said - woodworkers are suckers for technical sounding names, particularly if "micro" is involved

I know Jacob! I too have always favoured anything low-tech and cheap, and have also had good results on other tools using wire wool and linseed oil - especially on ordinary, common wooden planes which have lain neglected in a shed for fifty years.

This wax is not a new thing - it's been in use since the 1950s. I'm not a chemist and don't know why the crystal size is so important. According to the makers (http://www.picreator.co.uk/articles/3_renaissance_wax.htm) the essential difference is that other waxes can darken over time. That's fine if you've made some new oak furniture which you want to look aged - a bit of good darkening is very welcome (though I suspect that if you want C17th levels, it will take about four hundred years to achieve!) But there is a school of thought - following practice in the museum world - that has the objective of doing what you can to arrest decay, and keep objects in their current state. I am quite sure this will have had as much heated debate in museum circles as our sharpening discussions do, so let's not get sidetracked. It's a line promoted (quite loosely and openly) by the Tools and Trades History Society, TATHS and seems sensible to me.

What I am impressed by is that this wax seems to be extremely economical in use - I've been using tiny smears on a cloth on the end of my finger. Also, it can be used on a wide range of materials. And it is tough in use - ideal for objects which will be handled frequently.

In the end, we all have to buy some consumables, so it makes sense to buy those that work well.
Andy

BB, the finish on those engineering tools in your link to Alf's site looks really nice - just the right line between looking old and being usable. I'm not saying that wire-wool and Autosol don't work - they clearly do.

But this Micromesh stuff seems to be amazingly economical - I have used the two sheets shown for quite a few other jobs, and they are still performing just fine. The cloth backing stays intact and the abrasive stays stuck to it.

Way cheaper in use than nasty wet and dry from a pound shop or market stall, and no risk of leaving fragments of steel behind on the work.
Andy

By graduate_owner - 20 Sep 2012, 16:26
- 20 Sep 2012, 16:26 #715169
Hi everyone,
regarding rust removal, I recently tried cleaning some steel electrolytically. There's plenty of info on the web about this so I won't go into any detail, but it did work. The steel comes out of the washing soda solution with a black coating which wipes off with a cloth. One advantage of de-rusting this way is that it works on areas you often can't get at with a wire brush etc. All you need is a DC power source (car battery?), plastic bucket, some old unwanted iron as an electrode, and some washing soda.

I've used electrolysis to de-rust a lot of iron / steel items - the rust removal is effortless and no base metal is removed.

By AndyT - 20 Sep 2012, 17:19
- 20 Sep 2012, 17:19 #715187
Thanks guys - electrolysis is one method I have never got round to trying. Most of the stuff I've read on-line about it has been about de-rusting damaged modern tools where the objective was to get back to as-new condition, not old tools where the intention was for them to look old, but I'd be interested to see otherwise. Anyone fancy doing a fresh thread to show us how controllable it is?

There is of course another issue in the case of this bullnose plane - it has a wedge of wood as infill below the blade which I would not want to immerse in water!
Andy

I did a Preston Smothing plane No4 size electrolyticly it works very well and not to severely, it leaves the paternation.

My bullnose has a screw that holds the wood under the blade in, I thought they all did, saying that mine is a no name one.
Possibly user made bur the wedge is very well shaped. 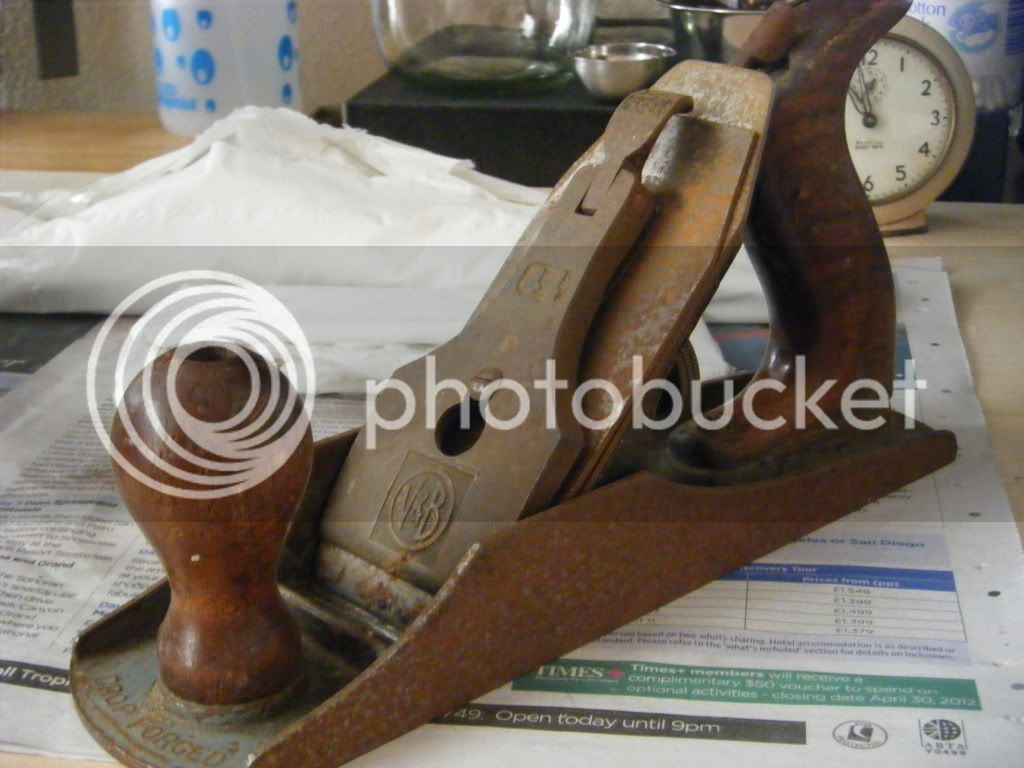 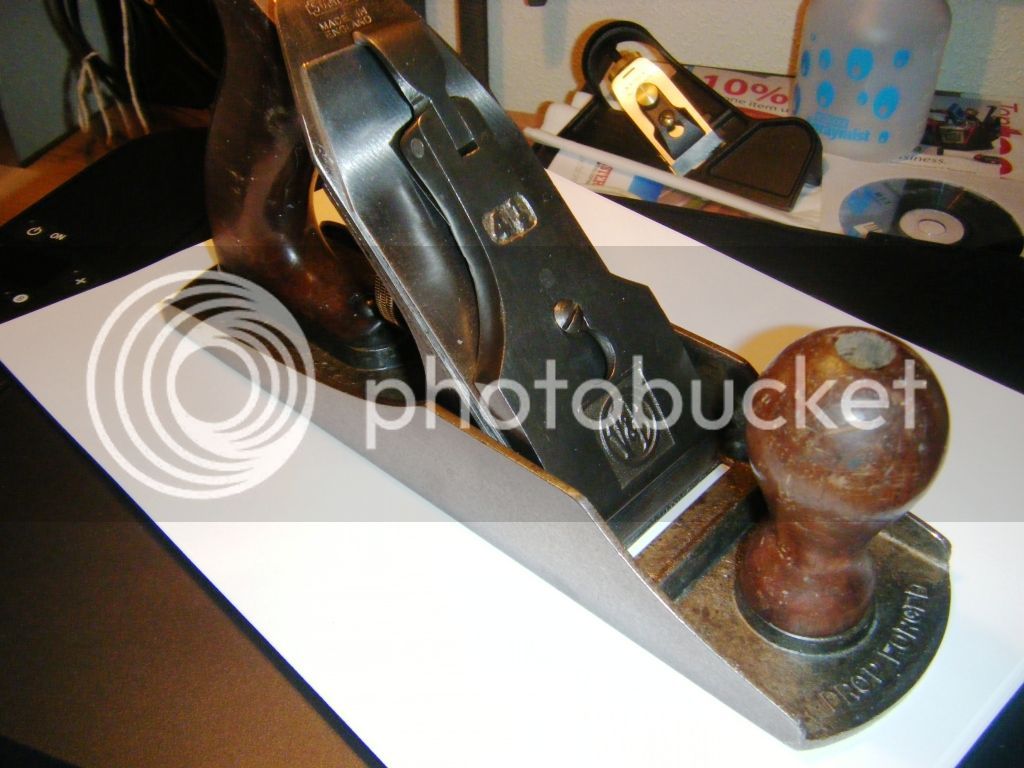 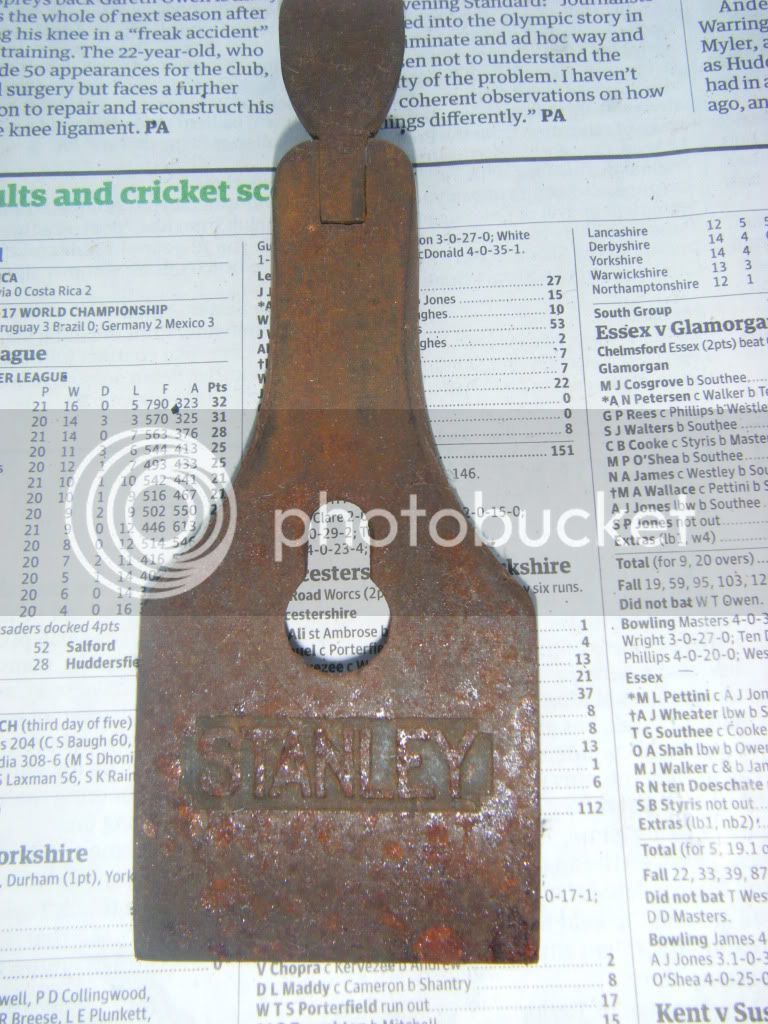 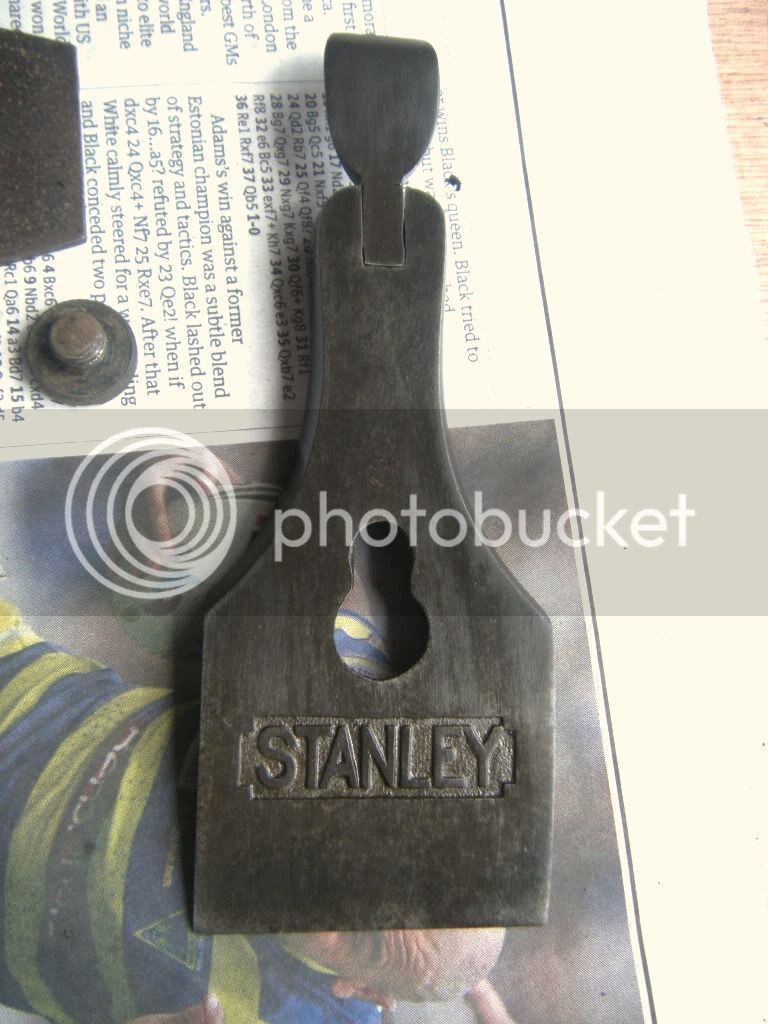 It's a good way to remove rust, but it is a bit of a faff; I save up bits and do them all at once rather than setting it up for a small piece. It's also no good if there is an attendant bit of wood! Does maintain some patina though.

There's no real control as such, just dunk it in and turn it on, come back 6 hours later and give it a scrub and rinse. I believe that a higher output ampage will shorten the time it takes but may also damage the underlying metal in the removal process, but I only use a 1 amp train set controller so no worries there and more than enough to do plane bodies, saw plates etc.
"What's right is what's left if you do everything else wrong." -- Robin Williams.