In the original posting I didnt put a scale on the image, The piece is 300mm high and 150mm square. It is made from venered birch ply with solid corner posts.
Although it is only quite small, the same construction techniques could be used on a full size chest.
This approach is only suitable with a veneered stable core. If the chest had been solid then a totally different construction approach would be needed to allow for timber movement
First stage was to sort through my burr veneer and select the best bits 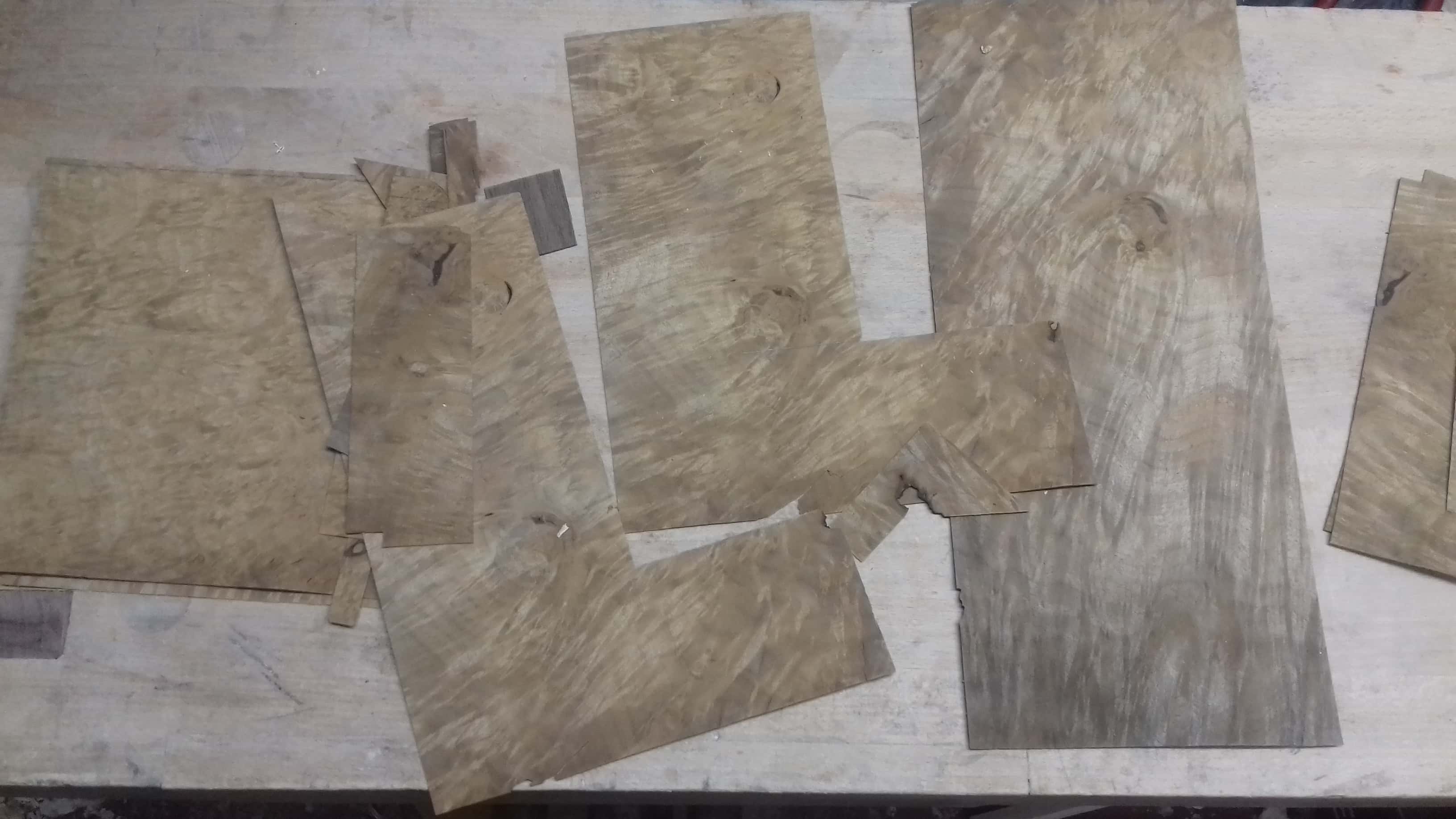 I checked these up against a bright light for small holes which were filled with supper glue and fine sawdust to prevent breed through during veneering (thankyou custard for the tip)
All 5 faces of the chest were made using 9mm birch ply. These were cut slightly over size and veneered in a home made vac bag. Burr walnut on the outside, plain black walnut as a balancer. This gave a total thickness of just over 10mm

Once set, these were cut to size.
The drawer dividers fit into rebates in the chest sides. As the drawers are graded in size and this was critical I used a scrap piece of ply to set up all the grooves on the router table. Because of the limited movement of my fence I had to cut slots using either the top or bottom as a reference so there was more potential for error 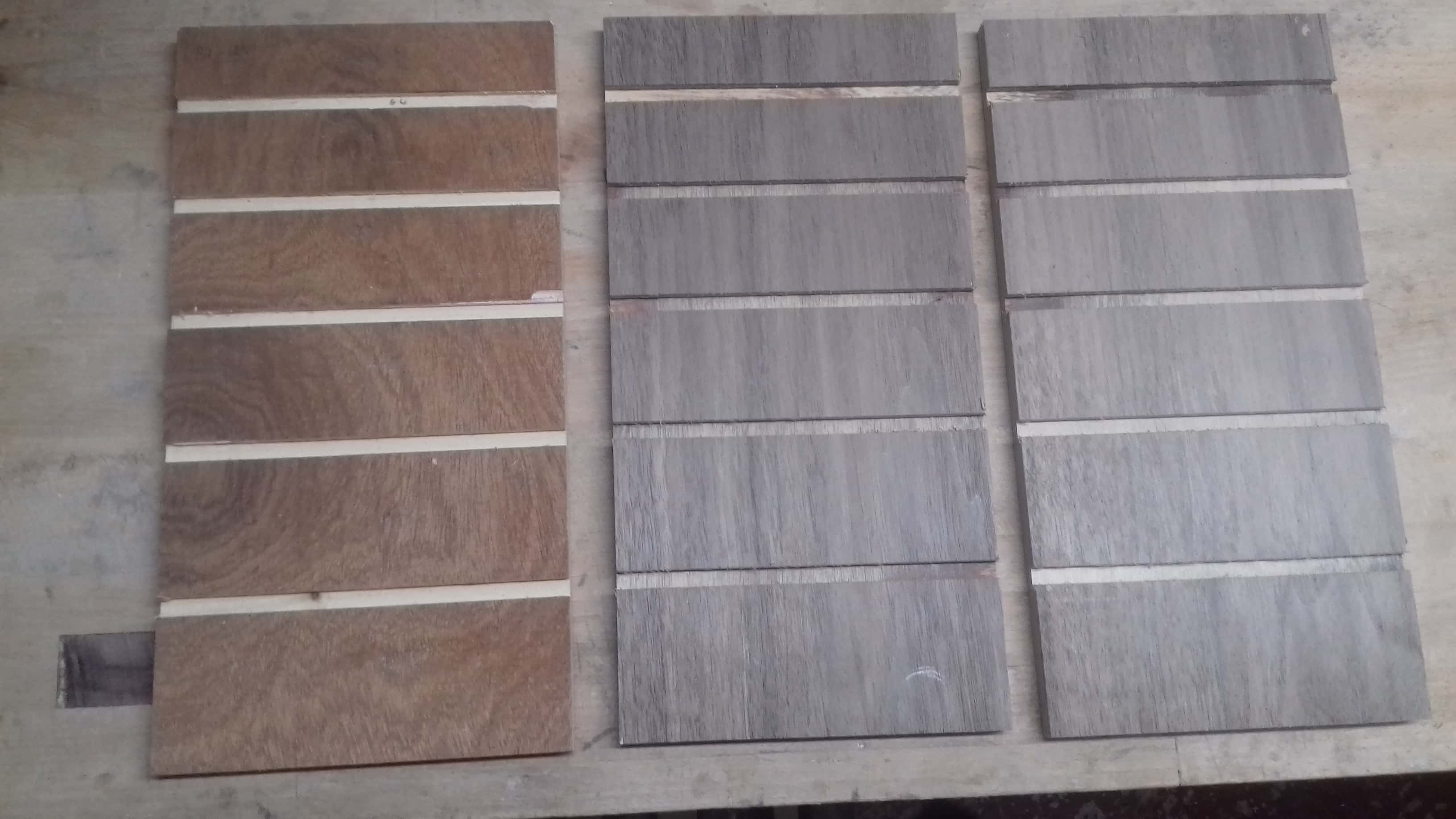 .
The panels are all held together using solid walnut corner posts which are fitted using 4mm birch ply splines. These have to be very carefully positioned as there is only limited room . The posts and the side panels are grooved on the router table and then glued up. The splines are deliberately cut so they dont bottom out in the slots as thsi would prevent everything pulling up tight and you also have to leave somewhere for excess glue. Throughout this build i was careful with glue quantities and used a small artist brush
Once dry the corner posts were carefully trimmed to length and flush with the veneer faces using a finely set plane and a cabinet scraper. Using the same setting on the router table the back panel and the back posts could be grooved and a trial fit.
Now on the drawer dividers. I extended the housings in the side halfway through the front lippings to give more support to the front rails,
The drawer dividers are 6mm thick and are open mortice and tennon construction. I cut a lot of the waste out using a 2mm slotting cutter but all the joints ate hand finished with a 1/16th chisel which is pretty small and quite fragile. All 5 frames were checked for square and then glued 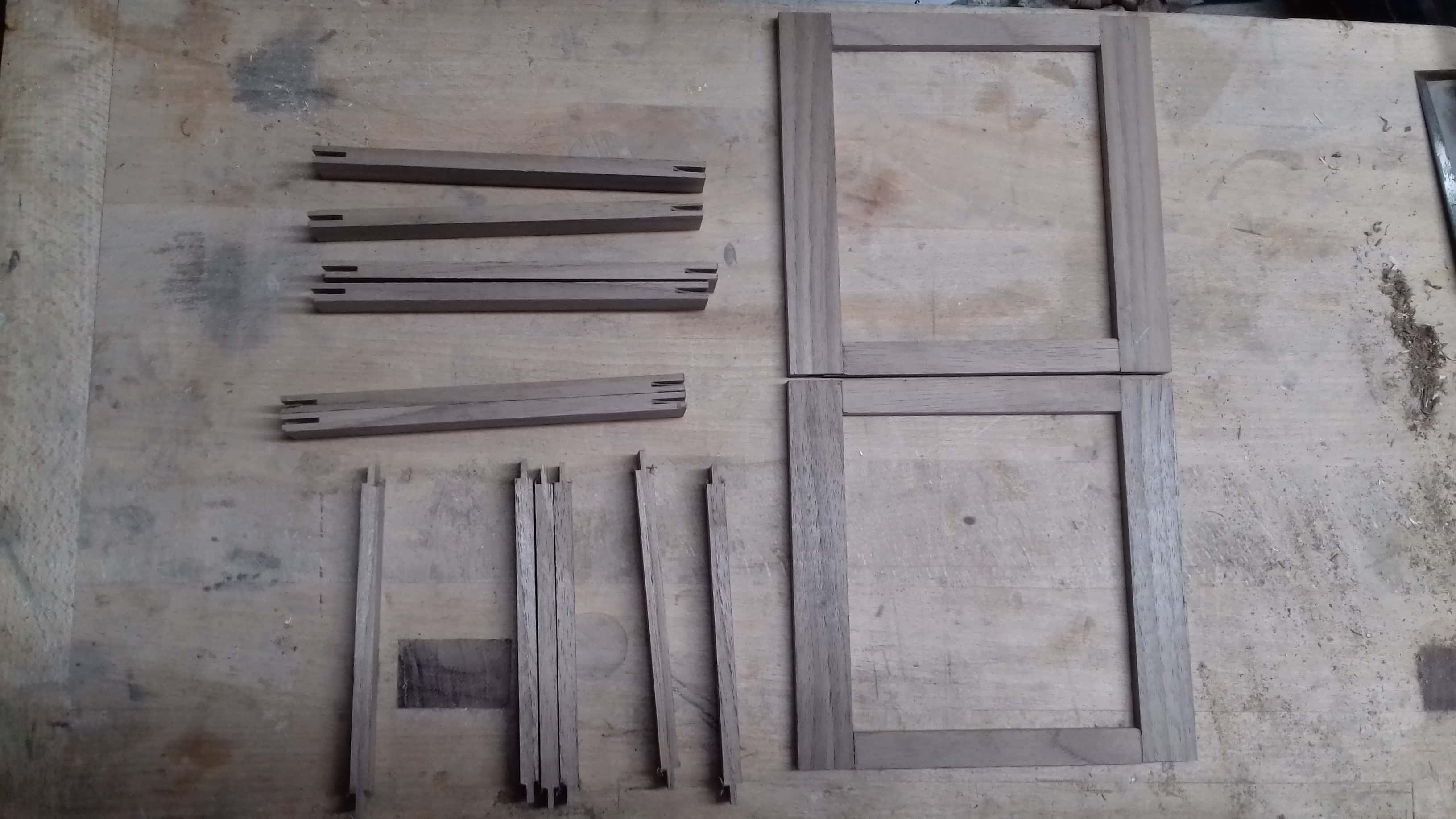 Once the frames were all dry the front rail was notched at the end to fit into the rebates in the sides.
While making such solid drawer frames may seem a bit overkill on such a small box it does mean that assembly is much easier and things come out square
Assembly. So now it was time to assemble the sides to the back and the drawer frames into the rebates. Everything went remarkably well. 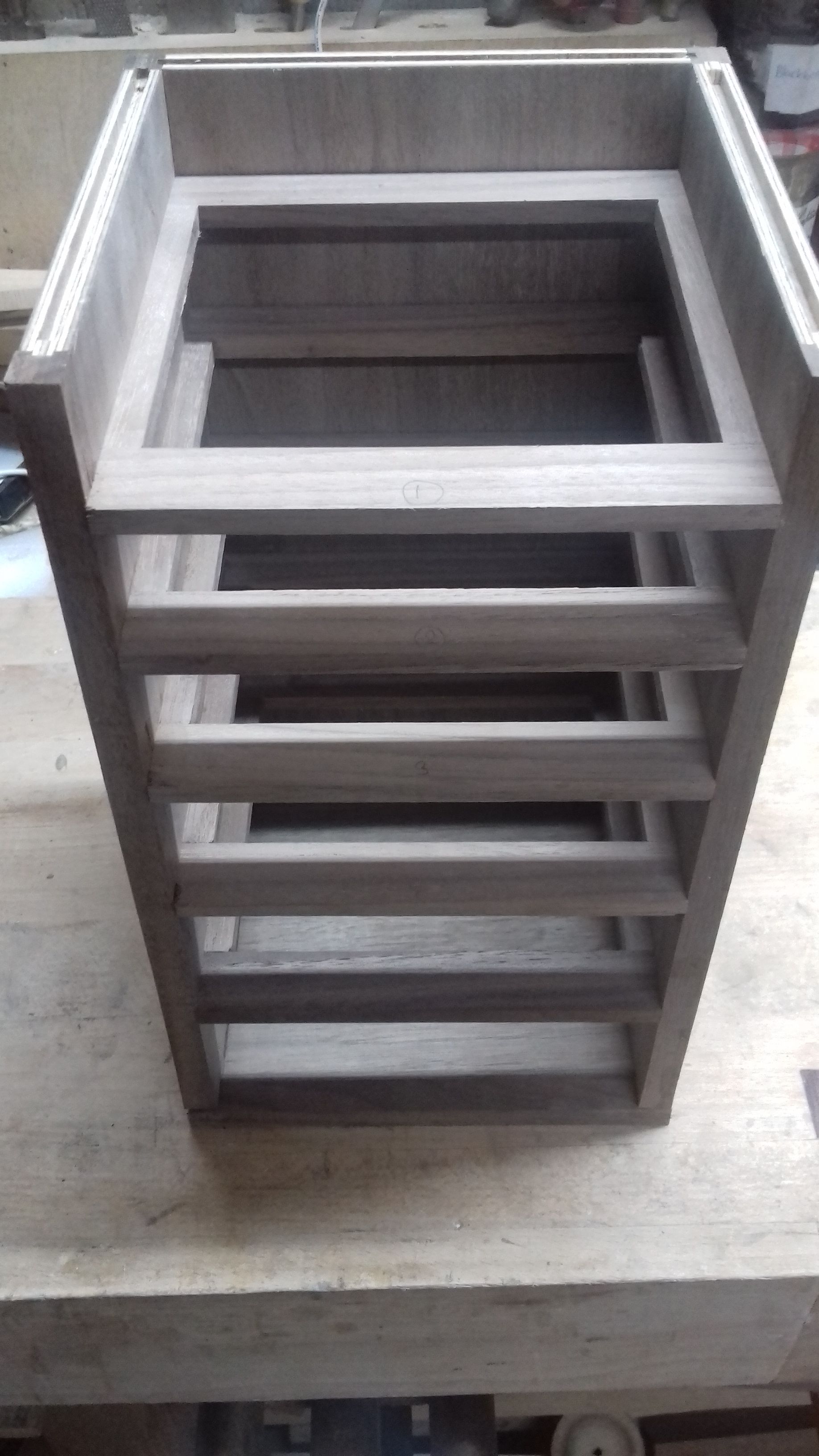 The top and bottom panels are made in much the same way as the side. The Edging is mitred at the corners and again attached with splines. Once the top/bottom have been edged they were very carefully planed to to exact size and then grooved on the router table. The grooves were then hand cut to meet at the corners 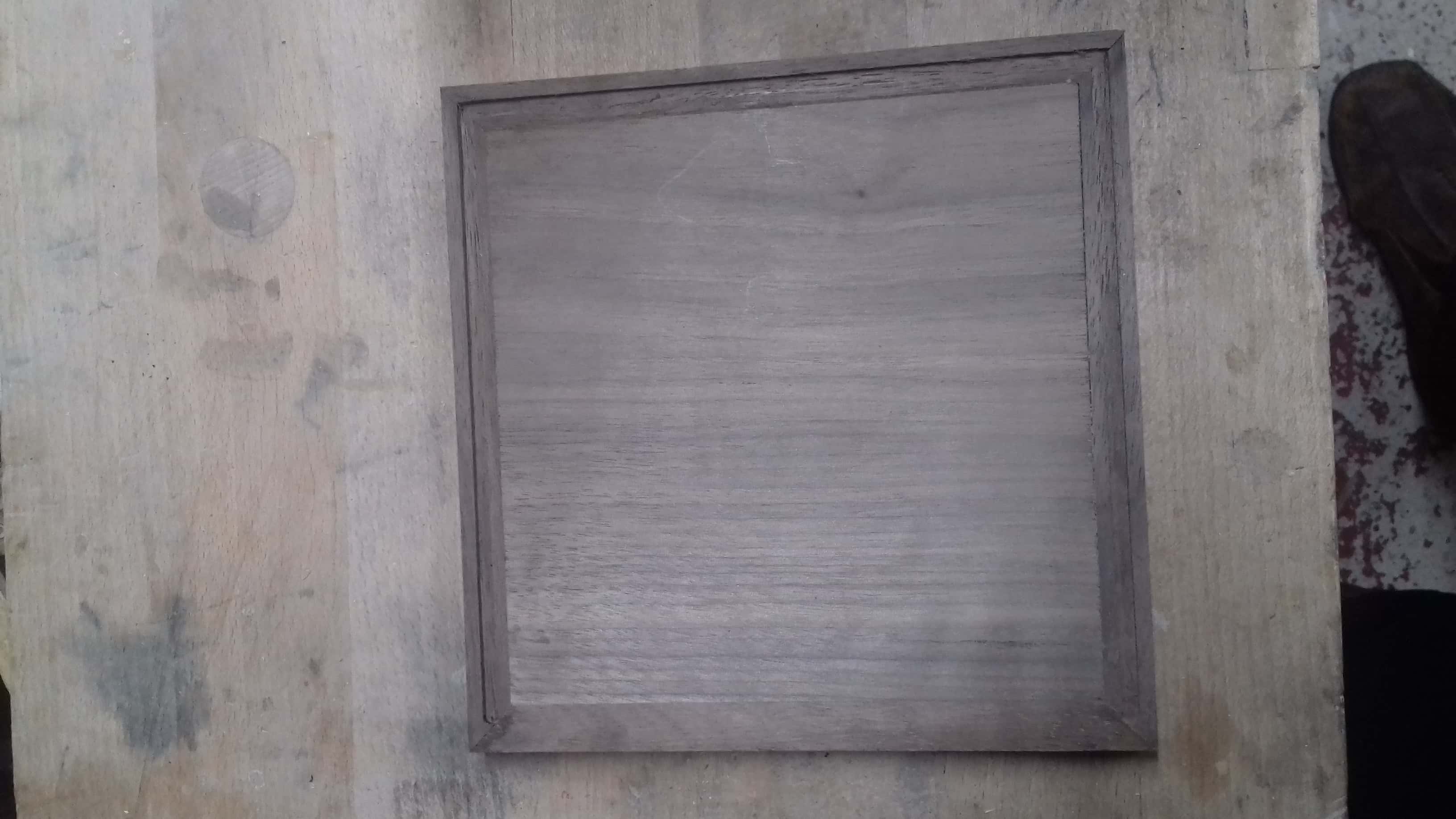 I cleaned up the top and bottom of the carcass so there were no steps between the side and back panels. I cleaned out the corners so the loose splines to attach the top/bottom went right in to the corners 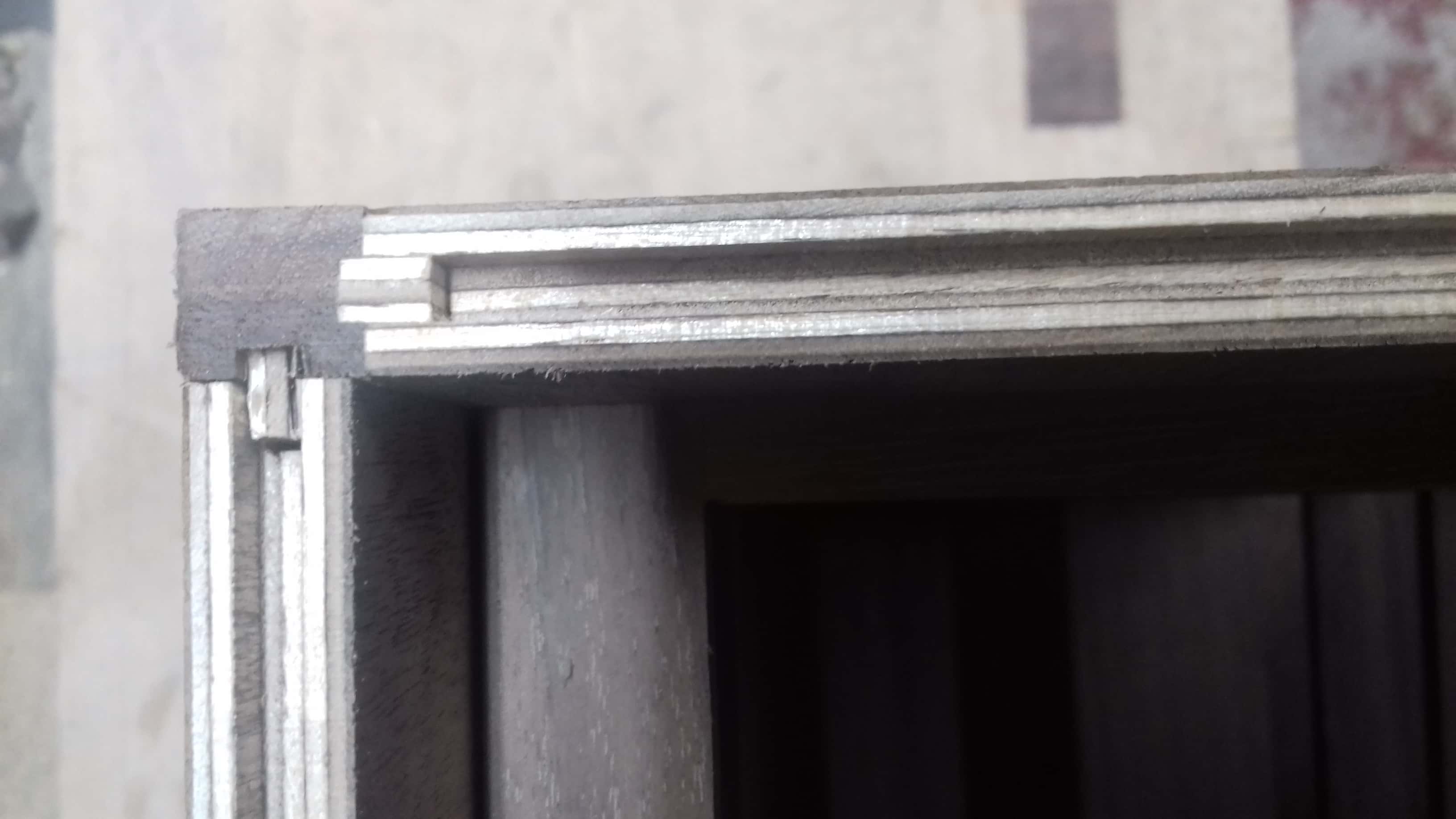 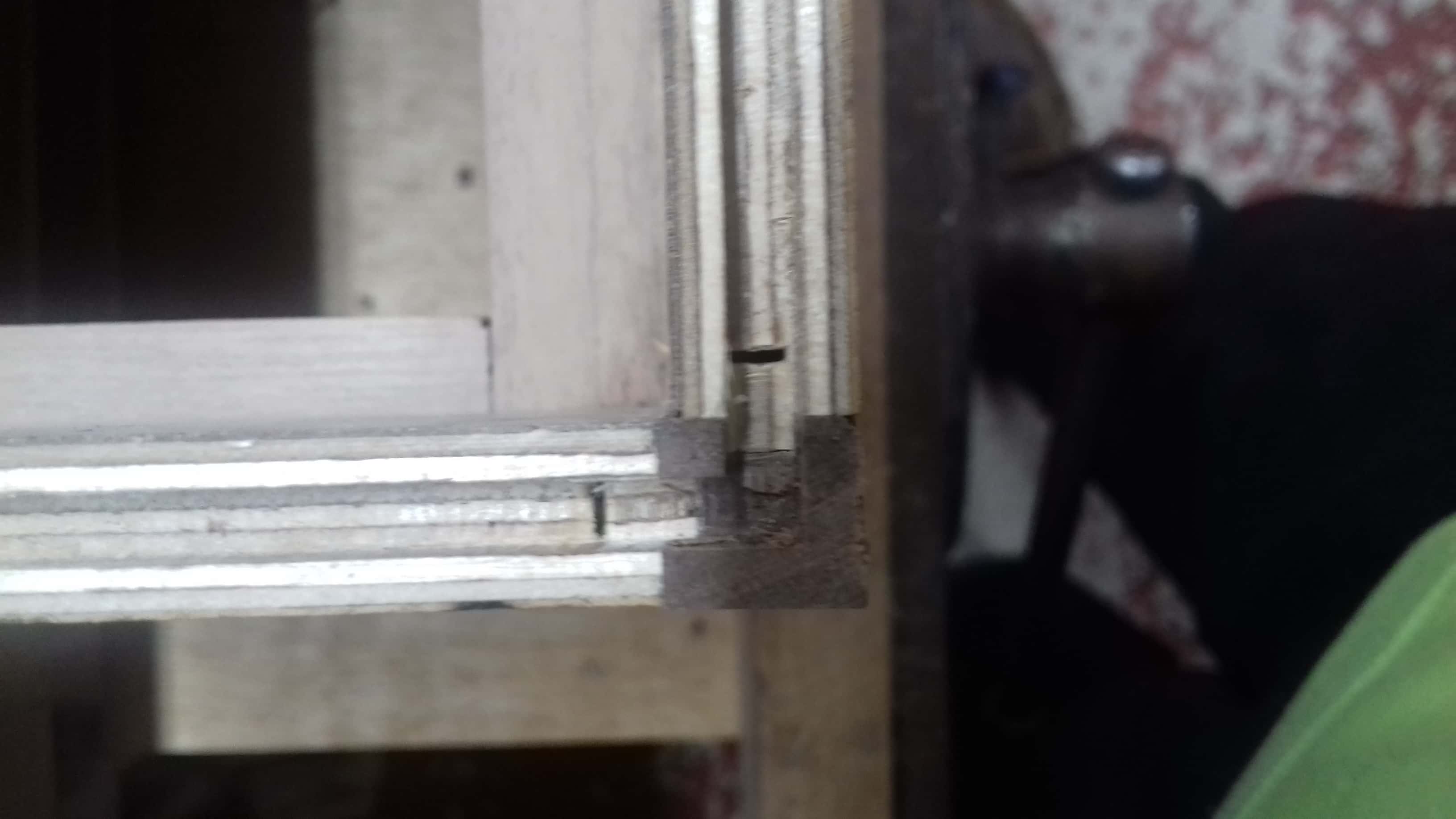 Top and bottom then glued on and everything cleaned up
Last job was to chamfer all edges using a 45 degree router bit followed by a shoulder plane
I wanted the chest to float so I made a small plinth 5mm high which is mitred at the corners set back 10 mm from the edge and glued to the base with 4 mm splines
The drawers are walnut fronts veneered with burr. Sides are 6mm ash. The bases are 1,5mm ply veneered on both sides to bring to a total thickness of about 2.7mm
The fronts were cut to size and adjusted on the shooting board so the entered about half way 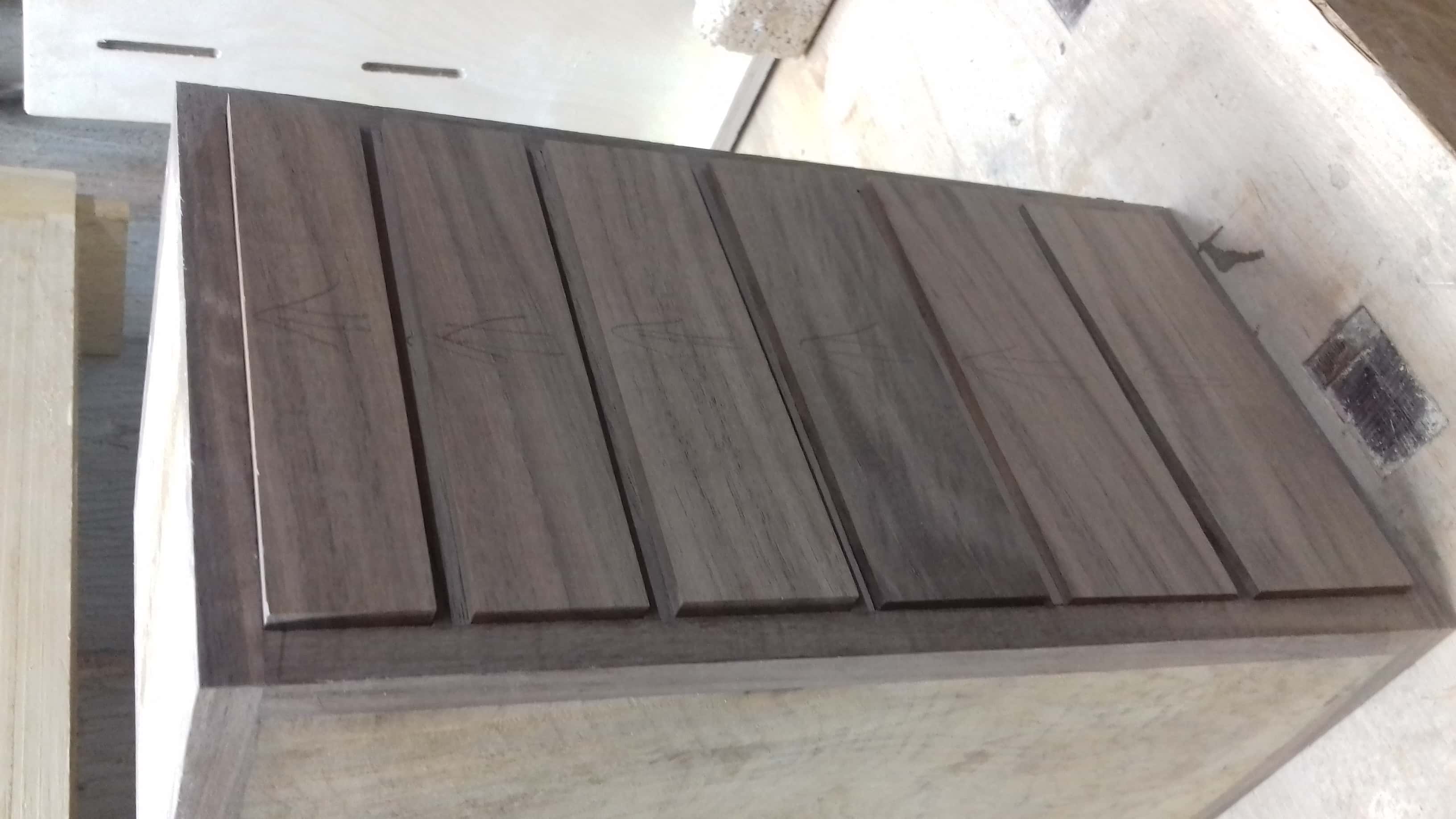 The sides were also cut so they were a tight fit 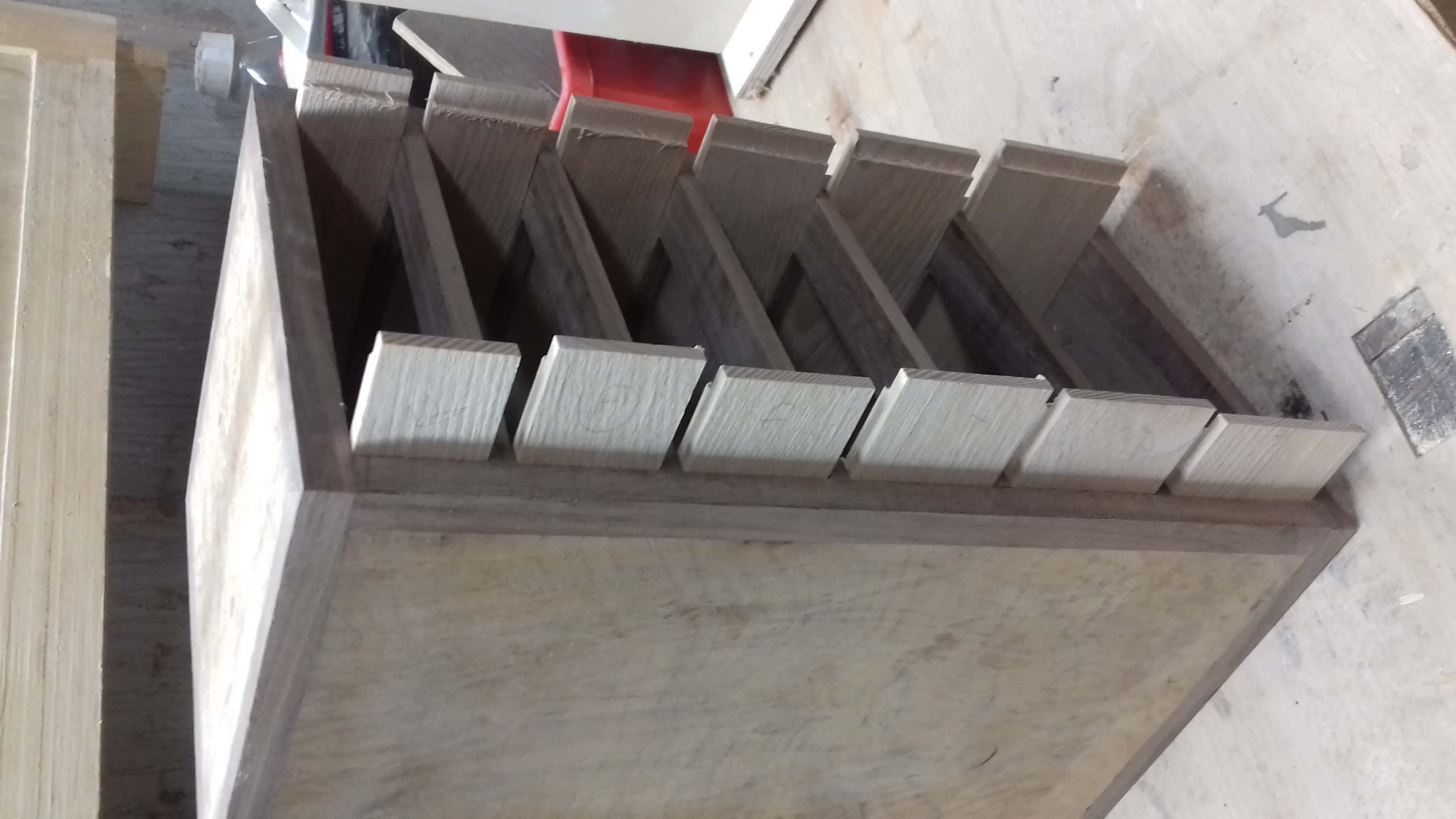 I had decided not to use dovetails for the drawers but use lap joints with contrasting dowel pins ( this was from a project in F&C a couple of months ago)
I didnt want the lap to run right through at the front as I wanted to keep the clean walnut lines of the top of the drawer front. The sides front and back of the drawers were all grooved to 2,5 mm deep using a 2.5 mm slotting cutter on the router table. The sockets in the front for the sides was cut in exactly the same way as for a lap dovetail. Once everything was cut I assembled each drawer. The ply bases are glued in all round. Once dry I made a small jig using a rebated block of hardwood to make sure all of the 3 mm holes for the dowel pins were aligned. Dowel pins were roughly cut and dimensioned through a dowel plate. Pins inserted and cut off with a flush cut saw. Drawers were then cleaned up and adjusted for fit. 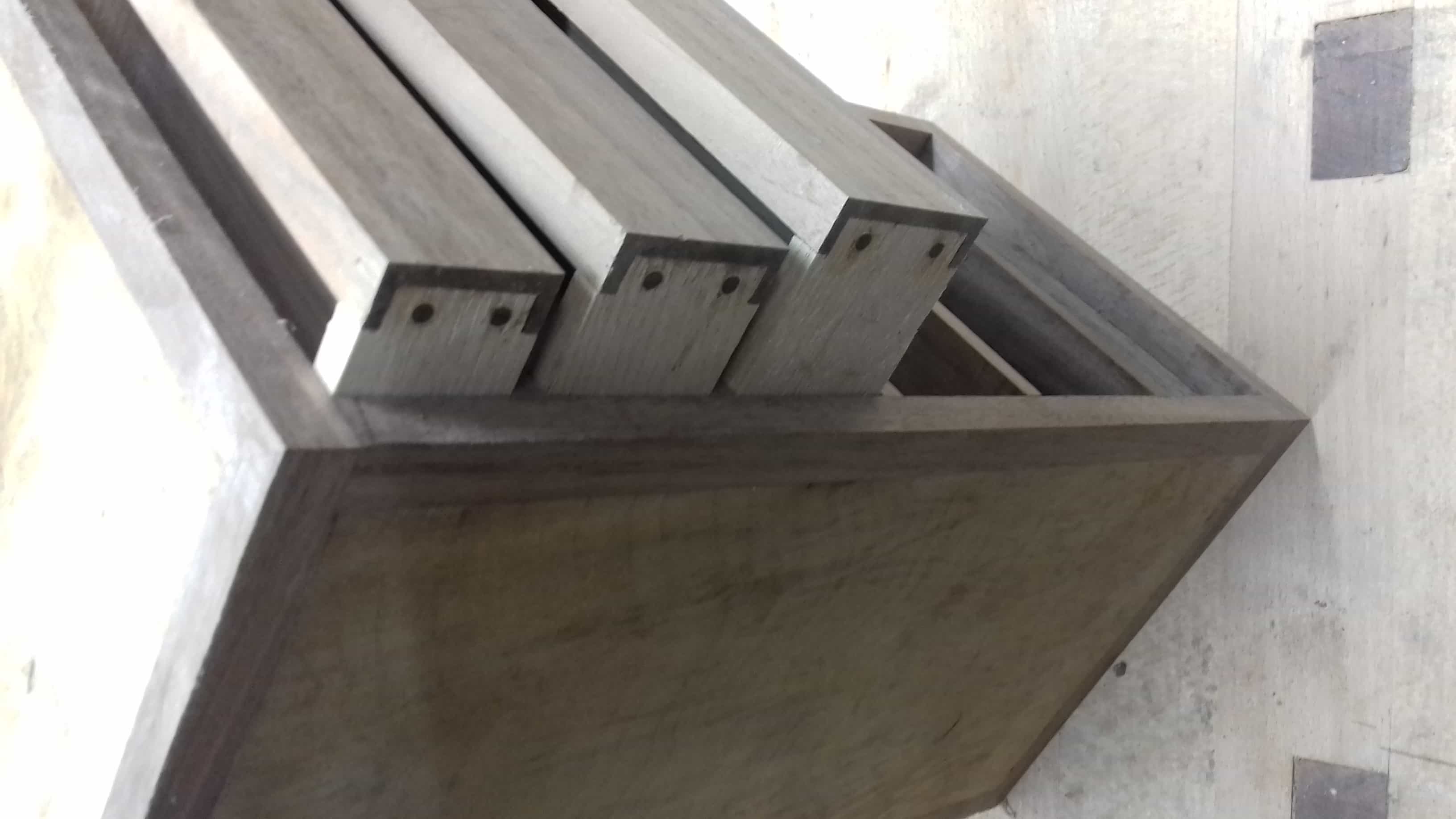 The drawer fronts were then veneered with burr. I did debate whether to put a beading around the edge to support the veneer but for such a small piece I thought it would be OK 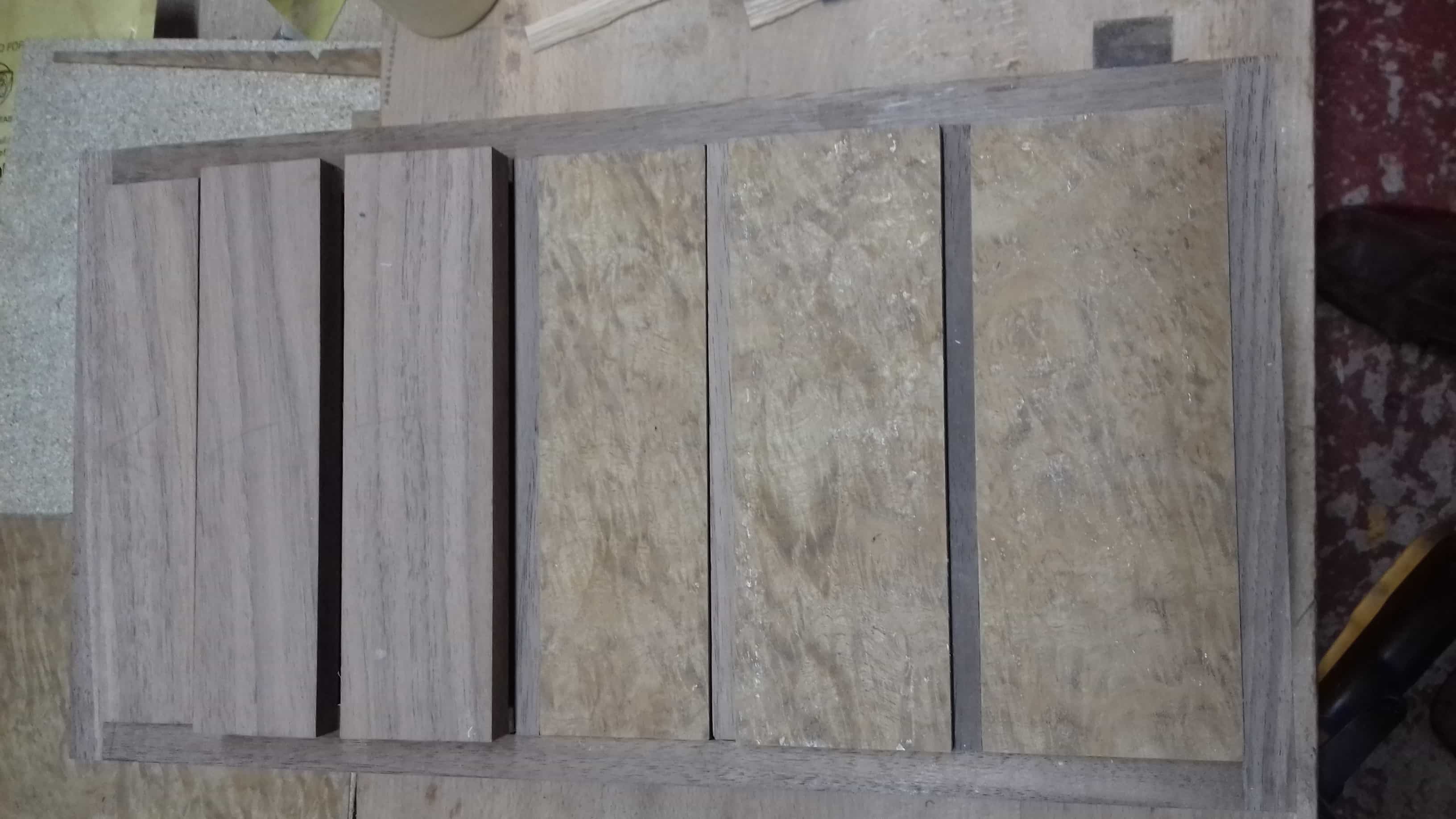 Handles. I think handles can make or break a piece. I tried ebony but found the contrast too much so went with more walnut.
The handles weer made by cutting 35 mm discs of walnut with a holesaw. These were fitted into a jam juck on the lath and turned slightly concave on each side. They were than mounted on an arbor and turned to final OD and hard corners rounded off. The finished buttons were then cut to produce 2 handles and 2 very small pieces of scrap. The handles were fine planed to remove any traces of the central hole. This was done holding the piece and drawing over a finely set sharp bench plane (a bit like setting depth of cut on each side) making sure that the handle would sit perpendicular to the drawer front 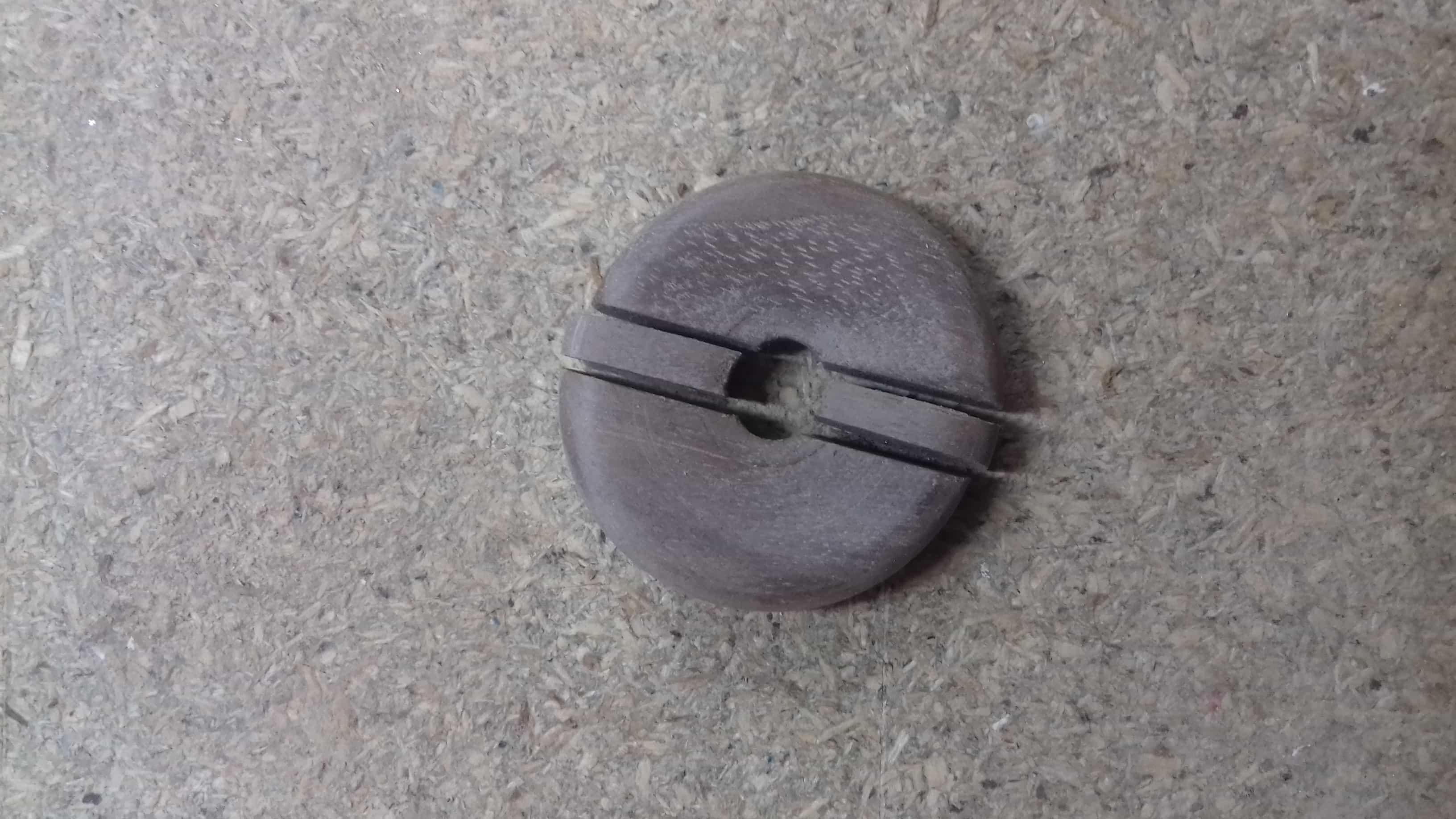 The handles were attached with brass screws and glue
Drawer stops are simple blocks about 4 mm thick ( each adjusted to get a flush shut) on the back of the drawer. This is not the nornal approach but I just couldnt fit them in on the front dividing rail
Everything was final sanded down to 320 grit and finished with danish oil followed by wax. Drawer sides were just waxed 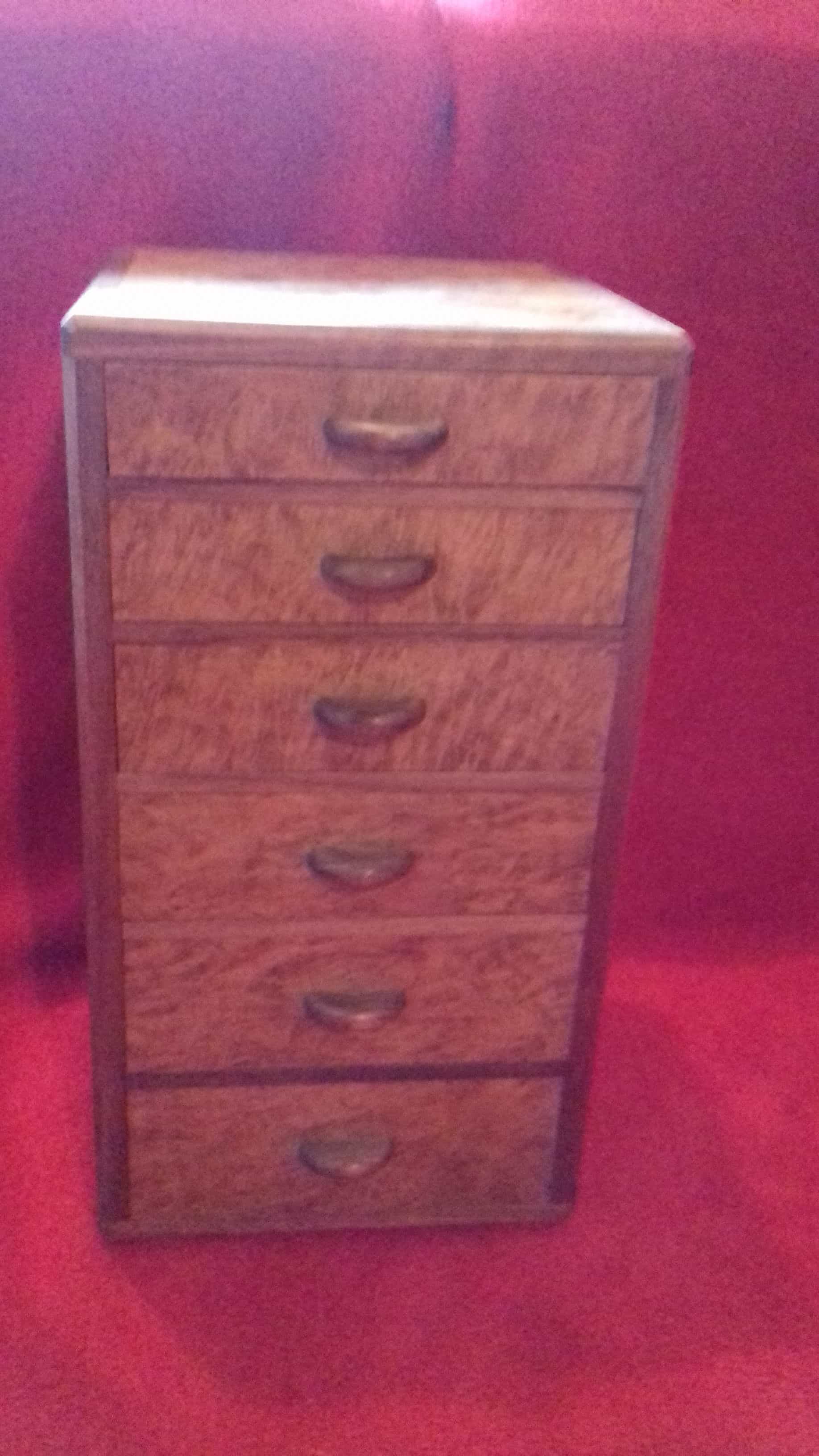 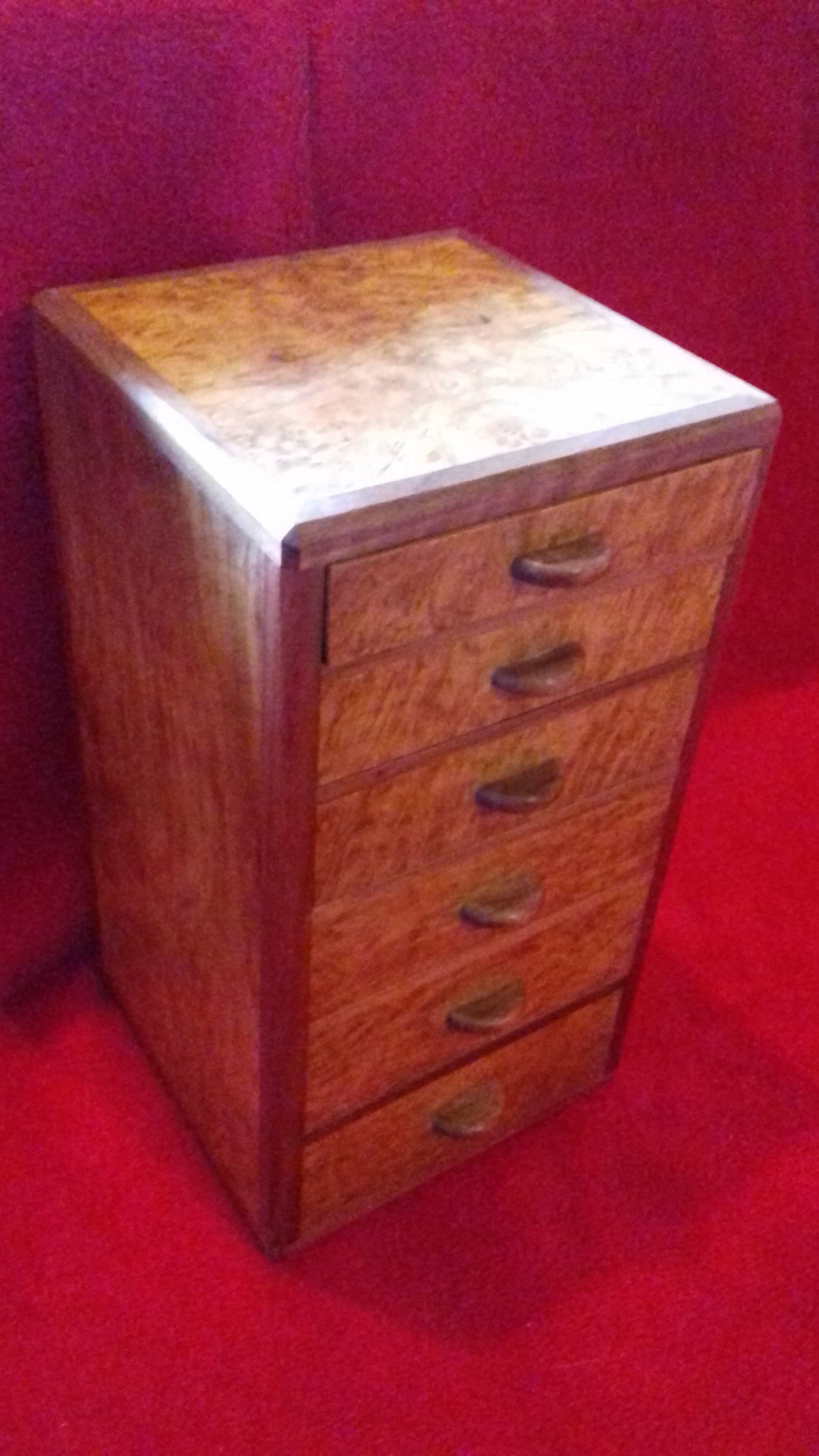 What would I do different next time
Drawer construction wasnt much quicker than dovetails and I dont think looks as good in real life. I would fit the backs into sliding dovetails in teh sides and leave the sides slightly overlong to act as drawer stops as well
I had to remake one of the dividers between the drawers and it has finished up much darker as it was a different piece of wood so will look at how to lighten it
Mrs C says she prefers lighter colour so maybe there will be a round 2
Ian

I wouldn't worry too much about the darker divider. The whole thing will change colour fairly quickly, and such differences will reduce.

Thanks for posting the extra pictures and description - very impressive. I especially like the ingenious method for making those nice drawer handles.
H

Thanks Andy. I was really pleased with the handles. Couple more photos added showing handles and plinth. Its essential that they all line up 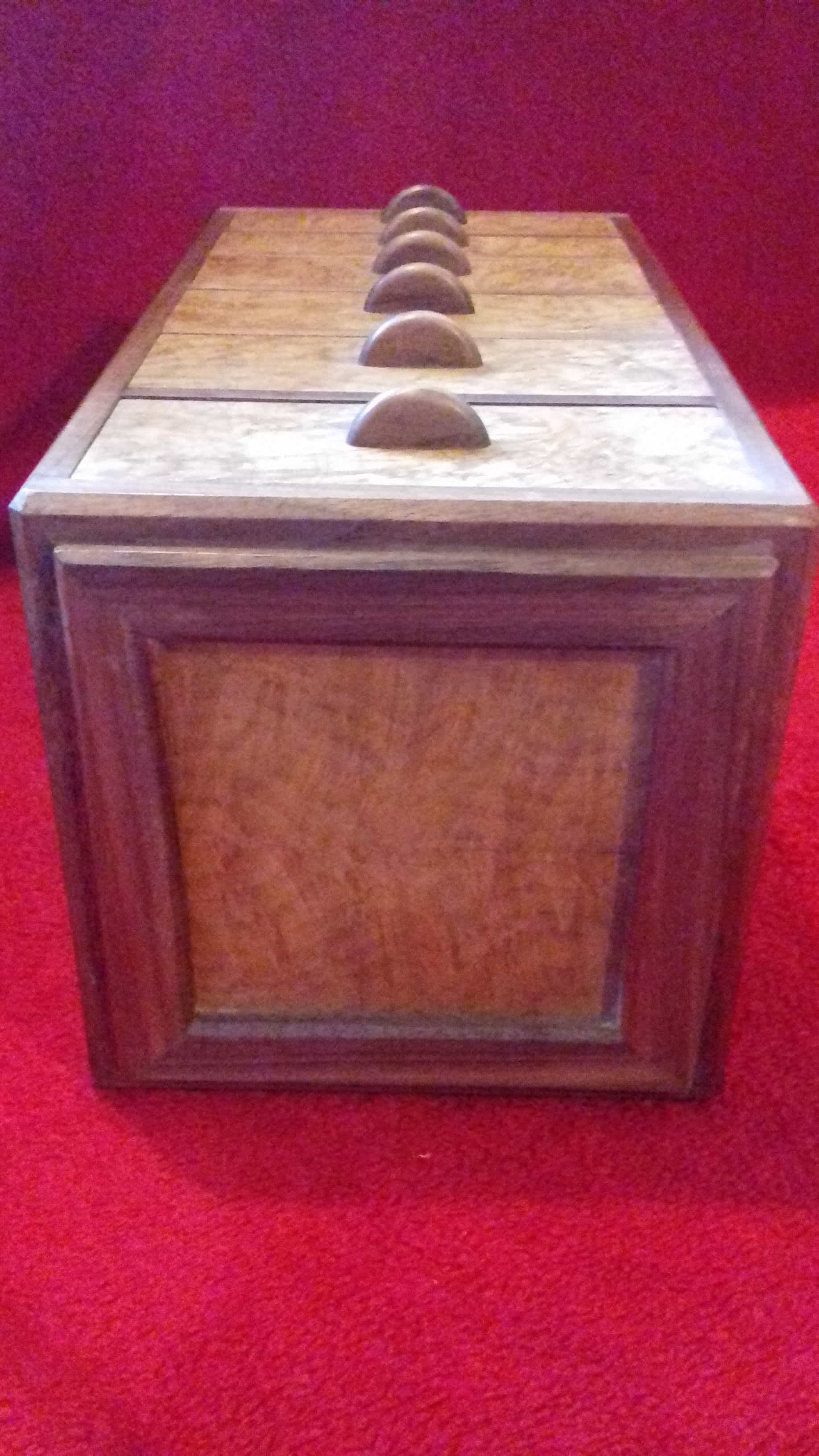 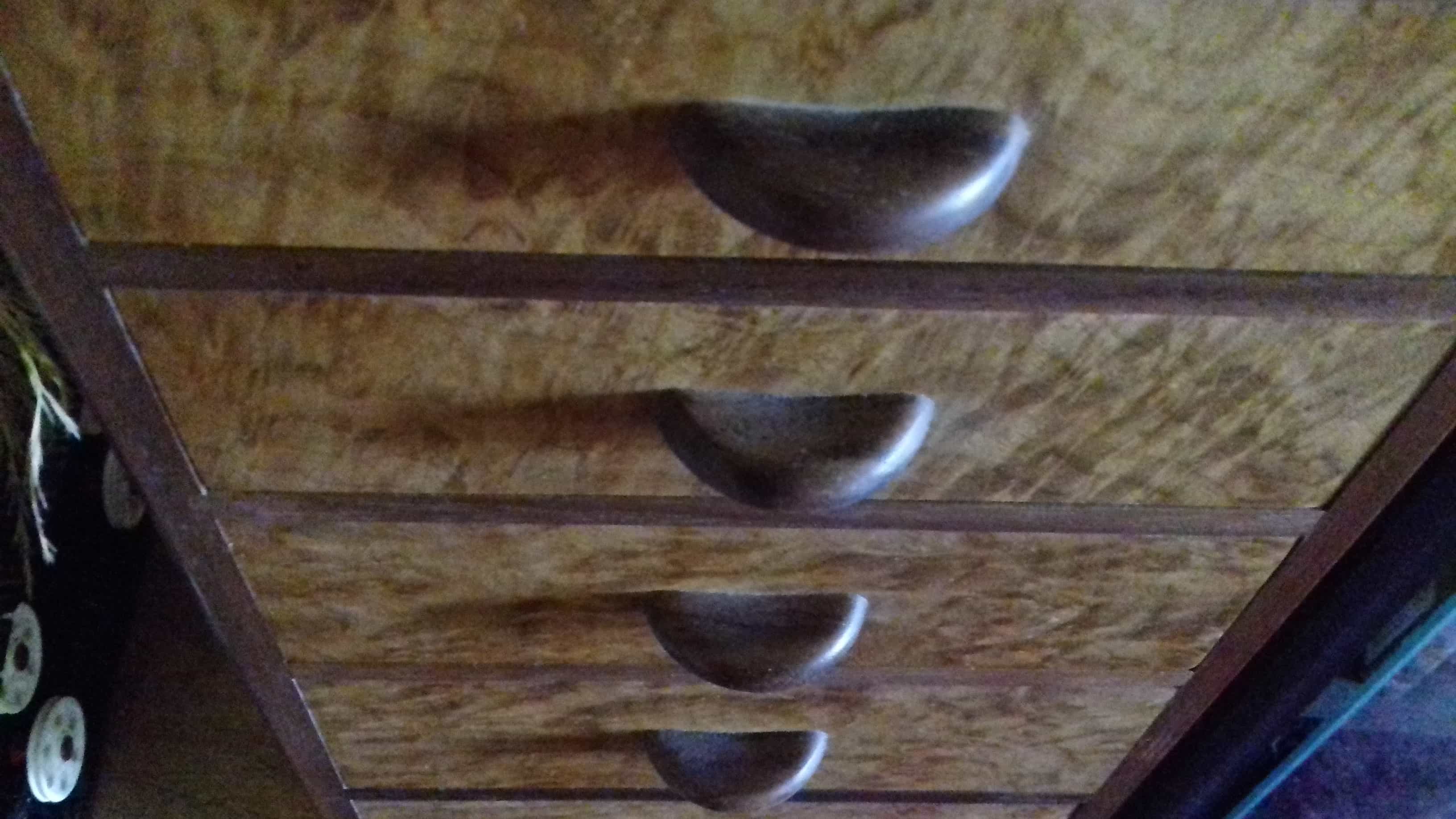 That does look smart. Good tip on preventing bleed through also. Thanks

A nice deco kind of look to it, but not quite, still looks modern

Many thanks for the photos Ian. I'm currently making a chest of drawers myself so your project is of particular interest to me.

John
You must log in or register to reply here.

Inviting your comments on my wardrobe plans