10% off if you order using the code SALE.

Go on, you know you want to. It will be insanely good. 4kg of joy. 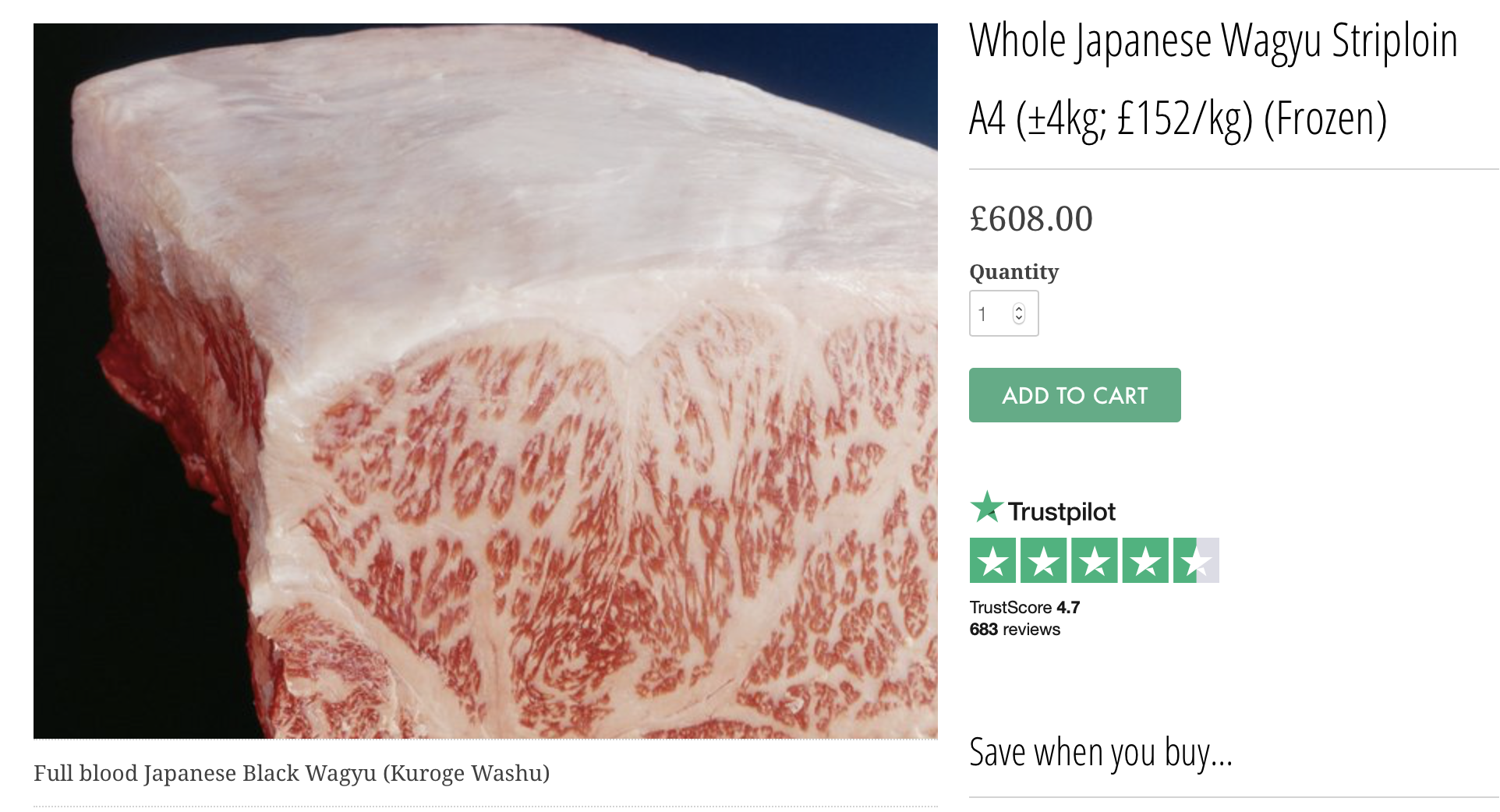 It's not that much in Aldi
L

Don't think that they have a Aldi in tunbridge wells.
Waitrose is down market for them.

And, for your information, Tunbridge Wells does not have a Waitrose either.
N

I haven't had wagyu. I have had steaks that I have really enjoyed, both cooked myself and ordered in restaurants. I would be interested to know whether wagyu at several times the price would top the list, and whether it would be in another league.

Jonathan Ross must get so disappointed when he orders this stuff

I don't buy Wagyu in the UK as the price is mad. I have eaten it numerous times in Japan, (Kobe usually being the source) and bought it in butchers there. Typically you eat it in much smaller portions than you would a steak here (and MUCH smaller than in the US).

The flavour is on another level. Exquisite. Very rich. Even my wife, who is not a steak eater, was blown away.

The source of the picture was Meat me at Home. They do have some bargains occasionally if you like things such as Iberico pork. Things you cannot readily get in even high end butchers.

AJB Temple said:
I don't buy Wagyu in the UK as the price is mad. I have eaten it numerous times in Japan, (Kobe usually being the source) and bought it in butchers there. Typically you eat it in much smaller portions than you would a steak here (and MUCH smaller than in the US).

The flavour is on another level. Exquisite. Very rich. Even my wife, who is not a steak eater, was blown away.

I saw the burgers in Costco, and came to much the same conclusion!

marcros said:
I haven't had wagyu. I have had steaks that I have really enjoyed, both cooked myself and ordered in restaurants. I would be interested to know whether wagyu at several times the price would top the list, and whether it would be in another league.
Click to expand...

I had a wagyu ribeye at Morrie's Steakhouse in Sioux Falls, South Dakota last year. For the cost, I wasn't impressed, as I've had better dry-aged steaks elsewhere. I don't think Morrie's imports the beef from Japan, but buys it from a local rancher who imported some heifers from Japan and grew his own. I have eaten Kobe beef in Okinawa, and it was a taste treat.

I now buy dry-aged ribeye from my local butcher and grill my own.
T

My local butcher raises his own beef and has just added some wagyu to his herd. Looking forward to next year, though doubt it’ll reach the levels of marbling you see in Japan

Had a couple of amazing imported wagyu steaks just the once and it was a real eye opener. One for very special occasions.


Steve Maskery said:
It's not that much in Aldi
Click to expand...

Joking aside I reckon Aldi and lidl do the best 28 day rib eye you can buy per pound unless you get up at 3am and go to Smithfield. The larger supermarkets steak is simply inferior in my mind.
Not saying you can't get better steak of course... just not at that price.

I put take mine out the fridge an hour or 3 before cooking and season. Then I stick it the cold oven and turn it up to 180. The cast griddle goes on the gas. 5 mins it comes out and that thin lidl steak is cooked rare in the middle. Spare bit of oil on the meat not in the pan. In to the griddle to sear both sides for a matter of 30 seconds to a minute top either side out and resting on a warm plate while 'plate up' (sorry) the rest of your dinner.

A sous vide would be nice but this works well.
Go on. How do you cook yours?
A

There is a well established herd of Wagyu cross cattle near Perth, Scotland. Their beef is absolutely the best I have had in the UK! Can’t remember what they are called but I had a fullblood Wagyu Ribeye from them, cooked by me, that was the best steak I have ever had.
S

In South Korea, barbeque steak is a prized meal. Simply cooked at the table on a hot plate so you can eat it as rare as you wish. Their prime marbled steak is the best I've ever eaten and looks very similar to the photo.
Cost is entirely based on the weight and grade of the meat. An array of side dishes including lettuce to wrap bite size pieces of meat in and spicy soy bean paste are all inclusive.
If you are ever lucky enough to visit, I strongly recommend the experience.

This was the first time I had wagyu beef, wok fried with duck liver and spicy sauce. Last August in Hong Kong. 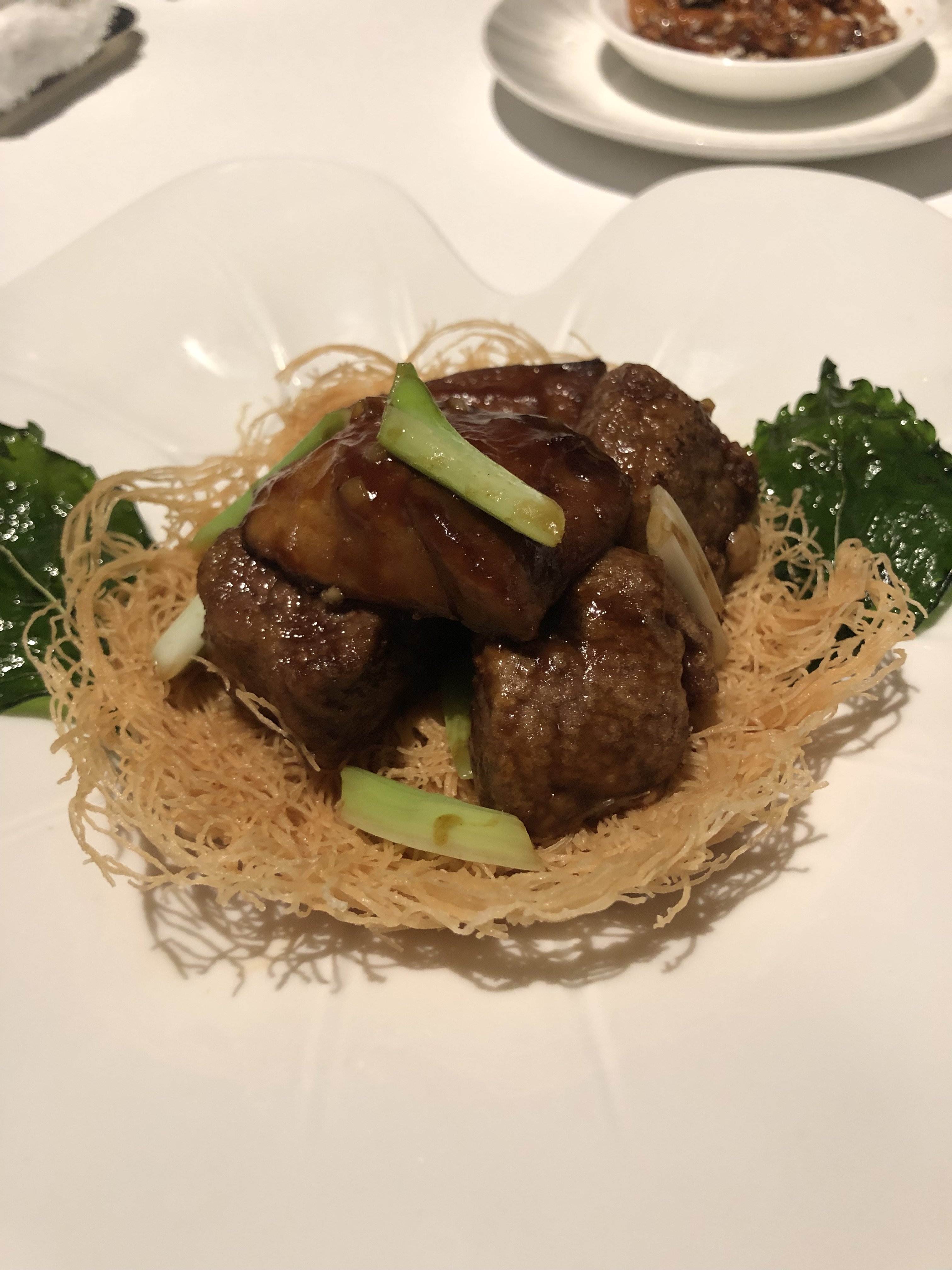 The market for UK venison is dire at the moment.

Even in a good year the majority of our wild venison is exported to the continent while the stuff you see in the supermarket is most likely imported from New Zealand.

The future of woodlands in the UK is dependent on annually culling deer and without an outlet many stalkers simply won't...

Save a tree. Eat a deer.

Oddly enough, Waitrose where I live has a dry aged beef cabinet. I like to get a BBQ, (green egg) seriously hot, and then sear the oiled steak. I cook straight from the fridge and the steak to be almost still alive. I rest it when seared and that gives me sufficient heat penetration to the core.

I prefer to buy a piece of ribeye, sirloin or fillet and cut the steak slices myself. I think it improves it greatly when it is much thicker than typically sold. I also adopt pro chef seasoning - by which I mean a lot of seasoning!

However, I used to eat beef a lot. Now I hardly ever eat it. I think quality is very patchy, including from local butchers and Waitrose (which is the only proper supermarket near the village where I live) and I have had far too many tasteless or tough beef steaks. I also cut back on red meat a lot and forced myself to eat more fish and vegetables. Healthier I think. In winter, slow cooking takes over.