I had been planning to build my timber glasshouse out of western red cedar, but after a long conversation with my usual timber supplier, I am now considering slow-grown Douglas Fir as an alternative. The building is raised up on a plinth 750mm high, so the relative softness of WRC is less of an issue when it comes to bumps and scrapes etc. The timber will be painted/ stained, so colour is unimportant.

I'd welcome any thoughts on the matter from those of you with window/ door/ summerhouse etc construction experience with either of these timbers. Which would be your choice? Please don't suggest any tropical hardwoods (sapele, utile etc), as I will not be using those.

My father bought a cedar greenhouse when he was in his 20's. He's in is 80's and still using it, with nothing more than a lick of linseed oil every 20 years or so. Good enough for me to chose cedar too.

What is the argument for Douglas fir ?

We have had a red Cedar greenhouse for 16 years now, and with the occasional treatment it is still as solid as the day we put it up.

As for Douglas Fir, our house was built in 1874 and we have only in the last couple of years had to replace the Douglas Fir windows, so that's 143 years later! And to be fair, that was generally only because of rot at the joints, the rest was rock solid. I built a kitchen out of Douglas Fir 20 years ago. The customer was going to paint it but never did. It still looks just fine (OK , indoors). It's a lovely wood to work with, such a nice smell.

We had a wooden painted greenhouse that came with the property. After several years of losing battle trying to keep it looking nice, I gave up and went for an ali replacement. I've got nothing against timber, but if you go down that route, Mike, don't paint it.
Brian

I'll warrant those paints weren't modern microporous flexible water based paints. This is going to look like a traditional Victorian glasshouse, and will be painted. I don't expect to repaint often as I'll be using Bedec MSP.

Greenhouses are not an easy thing to paint; accessing right to the ridge is difficult. I wouldn't.

Have you considered Accoya - it's probably what I would use? I've just tried some Bedec MSP after your earlier recommendations and I'm very impressed (although its early days, obvisouly!) - went on OSB very well. Cheers, W2S

I hadn't actually thought about accoya. How much does it cost?
O

Accoya is quite expensive - similar price range to oak I think.
I have a price list from my supplier - I will try to post a picture of it here. 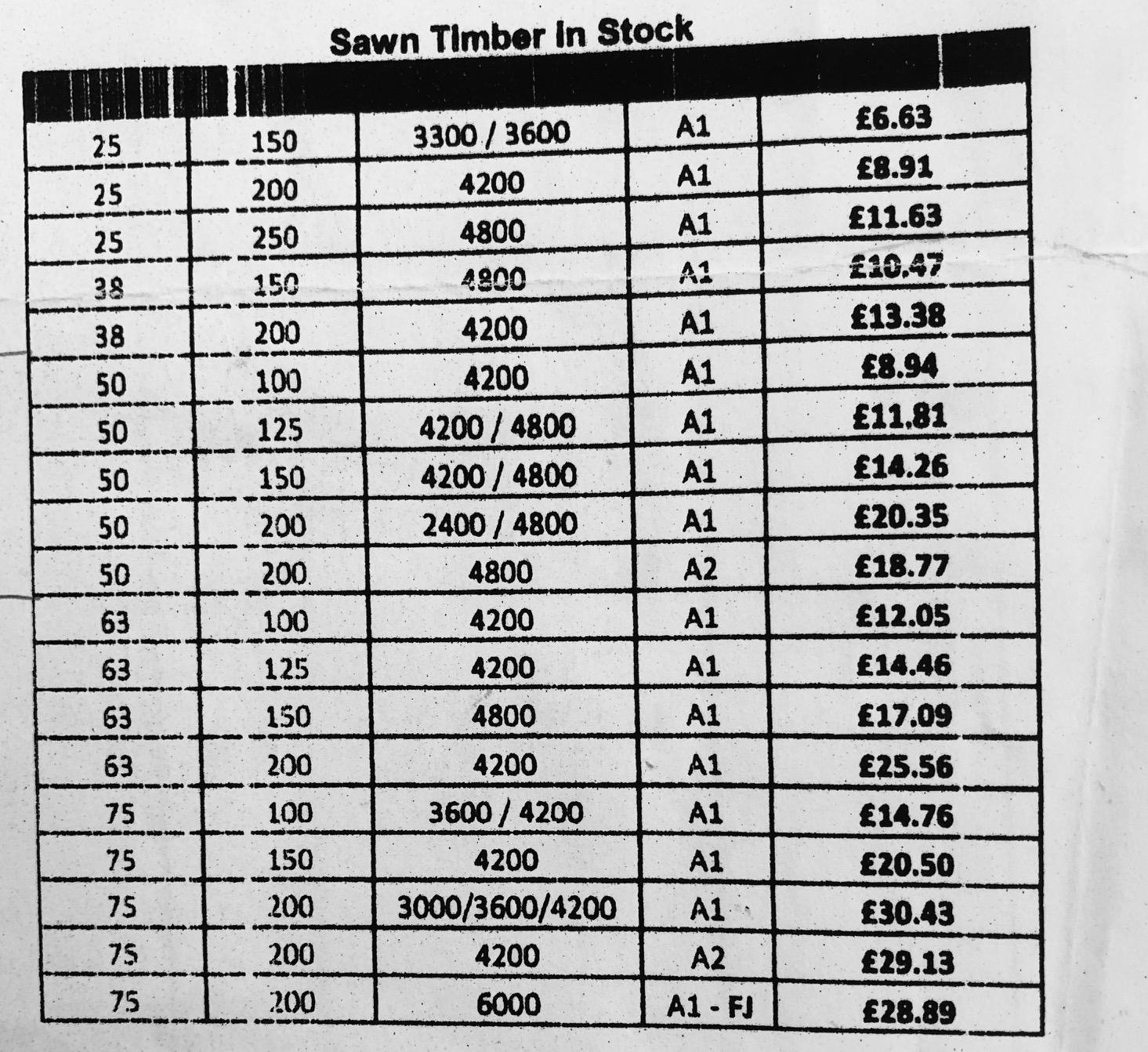 I think the prices have gone up a bit since getting that price list and they are per meter, plus VAT.

Thanks Oakfield. That works out at over £2000/ cu m for accoya. Top grade Douglas Fir is about £1400/ cu m, or about two thirds the price you give.

Depending on where your Dougie Fir has been grown, it probably has a durability of 2-4, whereas the durability of Accoya is 1 on the same scale. I've never used it exposed to the elements, but I believe that Doug fir takes paint less well than Accoya - and paint is more likely to stay on Accoya for longer as it is certainly more dimensionally stable (and is sap-free).
https://www.woodworkersuk.co.uk/timber-durability/

I think that over a 50+ year lifetime, paying 45% more for Accoya is a fairly small difference. Many greenhouse manufacturers seem to offer it as an option now.

Are you making the window frames out of the same wood? If so, will Douglas Fir be stable enough? It's certainly not as rot resistant as WRC.

samhay":3iw7bqpv said:
Are you making the window frames out of the same wood? If so, will Douglas Fir be stable enough? It's certainly not as rot resistant as WRC.
Click to expand...

The window frames will be of the same material as the building frame. Douglas fir is apparently renowned for being stable. And it is in the same category as WRC for durability.

I have made two cold frames and a greenhouse out of Western Red Cedar. Just oiled it, no paint. That was 5 years ago and it looks as good as new and still looks red. Presumably there is a reason why WRC is traditional for greenhouses.

Similar wood is used in Japan for making wooden baths and hot tubs.

I found it very stable to work with and easy to machine.
S

Will concede that WRC can be as durable as Douglas Fir. Sometimes.

I think Thorogoods at Ardleigh have very recently had a delivery of Douglas Fir .....If I remember correctly, it came from Canada!

Thorogoods are who I mean when I've been talking about "my supplier". I use them for almost all my timber supplies other than redwood.