I haven't had a happy relationship with these in the past. I did have some Trend ones, but they went missing between house moves, from memory they weren't very good, I was using them on some door hinges for a dozen oak doors I was hanging. They seemed to burn rather than cut, probably because they have silly short flute drill bits that quickly get filled then they back up. I then bought some cheap ones and they were even worse, the drill bits were made out of toffee. Here's the remnants. 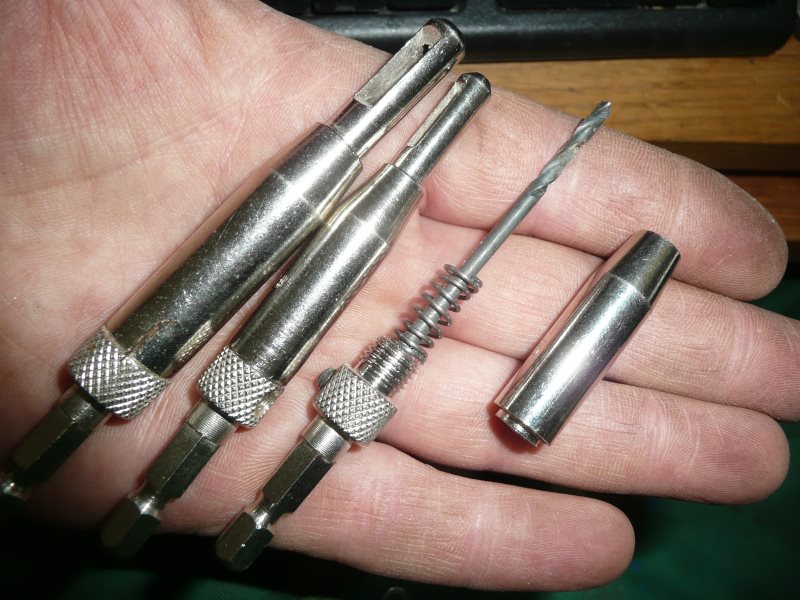 So moving on and deciding that I do need some as I'm refitting a kitchen and getting drawers sliders slightly out of line because the hole isn't quite centred, especially on big pull out drawers with two sets, means sticky drawers sliding. I thought I would go hunting for some decent tools, I decided to bypass Trend, I haven't been impressed with the quality of some of their tools for a while. First try is Bosch, they don't seem to sell these over here so a friend from the US threw them in their luggage when coming over this way recently. 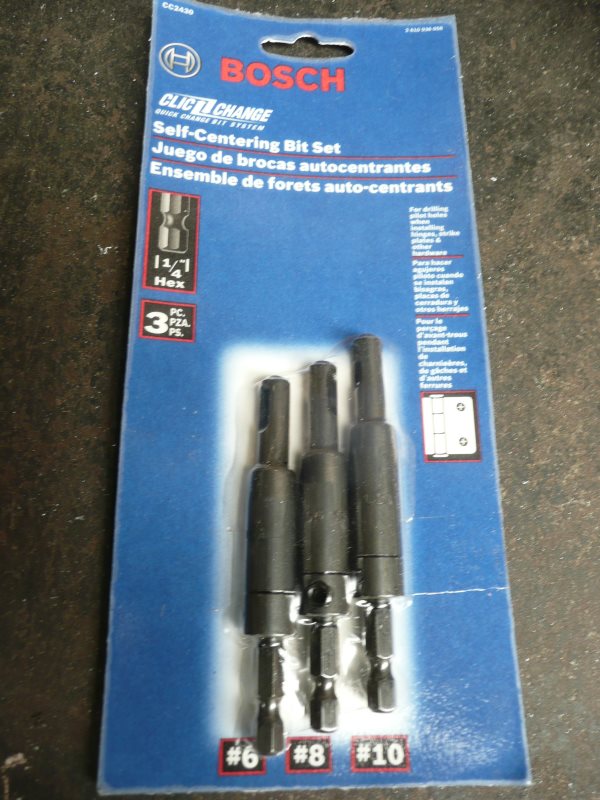 The reason I liked them are that from the reviews I gathered they use standard drill bits, but I guess you can probably do that with the others. 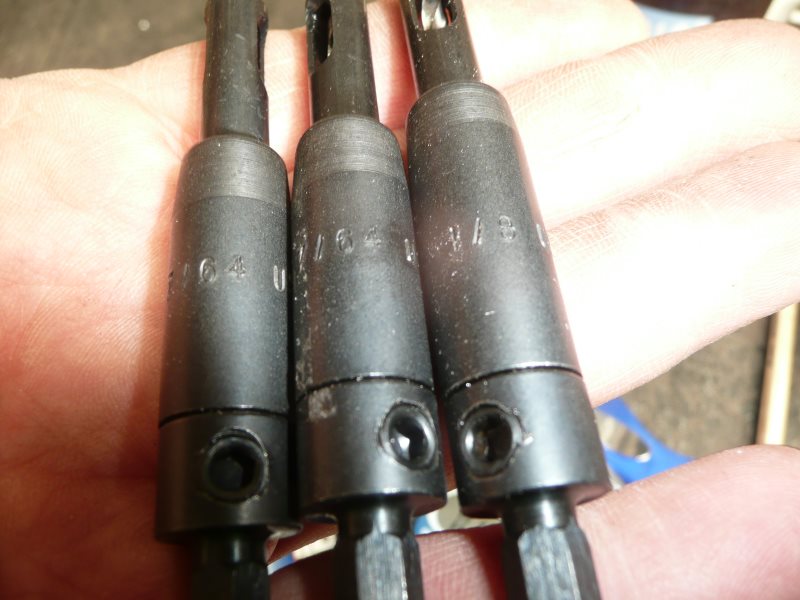 Although the packet is, the Bosch bits aren't labelled with screw sizes, but drill sizes, and they didn't put the right ones in the package, I got two 7/64" and one 1/8". I can't find out from the Bosch technical details if the missing one is 3/32" or 9/64", I suspect the former as they are probably aimed for softwood.

Here's the innards, not dissimilar to the others but black and the grub screw is meatier and the drill bits aren't made of the finest Chinesium. They do feel a lot heavier and generally better made. 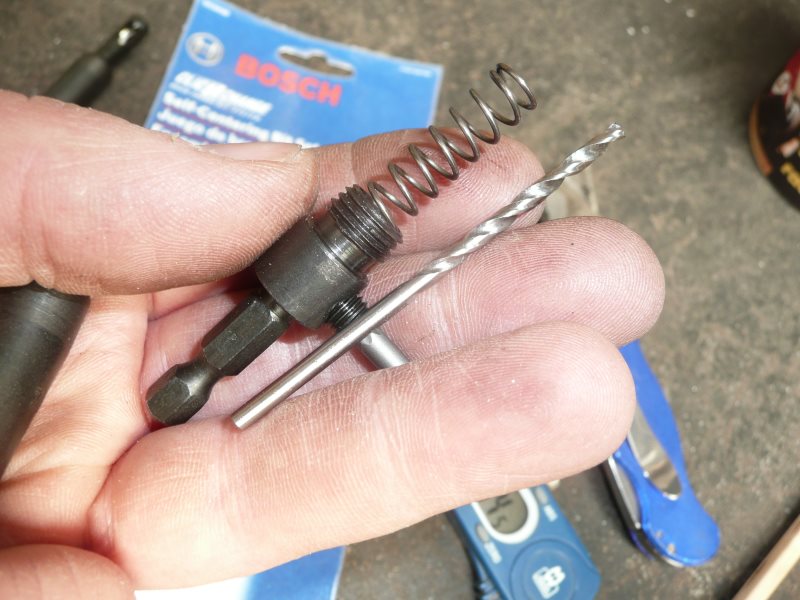 I'll try them out later this weekend, probably tomorrow when the weather turns, if these don't impress me I may try the Star-M ones listed on Fine tools.

Consider my gob well and truly smacked :shock:
I have never heard of these before, in over 60 years of using tools of all kinds. I've just had to look up lee valley's explanation of how they work :roll:

I think I've just found my xmas wish list items. But how small do they go?
Jewellery box hinges sized?

I haven't looked far Bob, but the smallest I have found is 2mm at Fine Tools, in fact I ordered one about an hour ago......
C

sunnybob":16dg03hh said:
But how small do they go?
Jewellery box hinges sized?
Click to expand...

Not quite, or at least I've never found any that go down to the number 4 screws I'll often use, I think number 6 is the smallest.

However, for fitting cabinet hardware I'll often want the screw a whisker offset so that it pulls the hardware in a specific direction, for example pulls a hinge hard into the hinge mortice.

It wouldn't work very well on a hinge as small as one for a small box, but for doors etc. I often hold the hinge in place and then run a countersink into the holes. Two birds with one stone - it'll take out any slight irregularity in the countersink of the hinge and automatically run to centre, leaving an indent to centre the bit.

If I have a 4 hole hinge, each screw will be at a different compass point to the rest. :roll:
This might go some way to a better alignment of my hinges. I like the lee valley set, but if I get them sent here from america the price will treble before they reach my door.
I'll have to find someone who's visiting.

I saw the lee valley set, the smallest bit they do is 5/64" which is 1.9844mm so I went for the 2mm Star-M one from Fine tools as I have a few Star-M drills and have been impressed with them plus will probably be cheaper after delivery.

The problem was I then bought some more drill bits, a famag countersink and .........

Tool money spent for this month unless I sell something, I need to have a clear out.
D

I am always amazed how many joiners have never seen these, I use them all the time, wouldn't be without them.

I found the Trend ones to be best but only ever used them and cheap ones. The cheap ones often don't go deep enough.

As said you do need to keep cleaning out the drill bits on certain timbers.

I have some I got from LV and when I want to use them especially for small screws I just touch the wood enough to mark the location. Then I pick a bit to fit the screws I want to use, so it will even work with #4 screws. I do the same when I want to drive long screws. A lot less digging out packed sawdust.

They do but you have to go around to the back. You need to know the secret knock or they won't let you in.

I don't want to go in, I carried out an Asbestos inspection at their head office, lets just say I would not even walk past it. (hammer)
F

Well I have to say that like sunnybob and several others, I've never knowingly seen or heard of such devices before, although I think/thought I'd "been around a bit"!

I'll keep my eyes open in out local "Lildi" to see if they pop up here.

Thanks for posting, "you live & learn"
S

Just bought a set myself today. Don't know when I'll get a chance to use them but they're there next time I fit some hinges.
R

I got a set of the lidl ones to try. Really only want them for fitting door hardward etc as it will save me some hassle I hope. For £3 it was worth a try to see if I like the system, if they are naff I can always buy better ones later on.

I used the Bosch 7/64" centre drill today while hanging some kitchen drawer sliders. Made the job nice and easy, no shifting of the slider when I put the screw in and I didn't have to half climb into the cabinet to make sure the drill was centred. It was in birch ply, the flutes didn't get blocked, worked very well compared to the last ones I used.
You must log in or register to reply here.
Share:
Facebook Twitter Reddit Pinterest Tumblr WhatsApp Email Link