Hi,
Can anyone recommend a decent wood glue that is runny so comes out of bottle easily? my hands have got so bad now I cannot physically squeeze the sodding bottle due to lack of strength. I see lots of videos online and their glue comes our very easy.....I am also having trouble squeezing my small bottles of superglue for the same reasons.
Ant tips most welcome
Cheers
Brian

Take the top off, tip it into a small container and spread it with a lollipop stick. That's what I do if I'm using any amount.
S

I put some D4 into a cleaned out washing up liquid bottle and came it out very easily...a bit too easily at times #-o

Can't really help technically Brian (sorry) but what about cascamite where you can mix the glue yourself to a fairly low viscosity from powder. For interspersia (still can't spell it! :wink: ) I would guess you could lean on the tolerences a little more than for say a high impact application like a workbench for example. I'm wondering if you could get a high enough gauge syringe type affair. (Veterinary? etc, you must know some farmers up there! ) that could then drawer up your mix up and still be accurate in laying out your patterns.

Pushing and pulling a big metal syringe with two hands may be easier than squeezing a bottle with one? I have bought syringes for applying cascamite to gaps in my shoddy work ( :-$ ) albeit on a much smaller scale and it works.

I have only used cascamite and titebond3, the latter I decant into a fairy liquid bottle, as Scooby says. Bigger nozzle and seals easily. It can fairly roll out the bottle if not careful.

I wonder about hide glue or more arcane glues and so on and hopefully that might be an option if someone with more knowledge can share some light.

Also wonder if the solution is more about the dispenser than the glue.
Not saying this is a solution but an idea depending what works for you. 'Give me a lever long enough' and all that Archimedian shizzle.
https://www.aliexpress.com/item/3295013 ... 14188501-1

titbond make a version of hide glue that's very runny, I really like it, it's great how little of it you need and how it lubricates joints instead of freezing them like PVA does very easy to use and apply, starting to prefer it over PVA recently.
P

I use Everbuild D4 from Toolstation for almost everything now but also found that once the bottle was half empty it became difficult to get out of the bottle. I purchased a Gluebot mini from

and as long as you keep it topped up you dont need to squeeze it much for the glue to come out and it works at any angle you hold it at.
M

I decant Titebond into a wide neck screw top plastic container, adding a very small amount of water to make it spread more easily. It keeps just as well In this as in the original bottle, easy to get a brush into and no waste.

Decanted into a Dettol container for me.
I don't know how your supposed to squeeze a whole bottle of the stuff.

Vice grips and a pick are needed after leaving it for a few weeks.
R

I keep my glues in the kitchen near an Aga. I don't have that problem and they don't dry up (as long as I put the top back on). Are you keeping them in a cold workshop ? I had that problem before I changed my storage location!

I use one of these with D4 pva

powertools":34miud5n said:
I use Everbuild D4 from Toolstation for almost everything now but also found that once the bottle was half empty it became difficult to get out of the bottle. I purchased a Gluebot mini from

and as long as you keep it topped up you dont need to squeeze it much for the glue to come out and it works at any angle you hold it at.
Click to expand...

I'll second and third that! Gluebot's are fantastic for dispensing the sticky stuff and like loads of others here, I use both of mine with Everbuild D4 which for me, for most jobs, is just about the best glue out there. D4 is pretty runny stuff and it's very easy to use with a Gluebot - Rob
O

Plastic tomato sauce squeeser bottle. Can use 2 hands if you have to. That and as someone said being warm helps a lot.
Regards
John
W

If you are still struggling to get enough grip try clamping a one handed squeeze clamp around the bottle.

I too use D4. You can water it down slightly if you want to, to make it a little runnier (if that were necessary). Just a few drops, because obviously you'll be affecting the strength of the bond.
R

Pop it in a bucket of hot water fora few minutes before you want to glue up. I have the same issue with my hands. More specifically thumbs.
J

In the winter I stick it in a bucket of hot water.

Here's what I use for white wood glue: 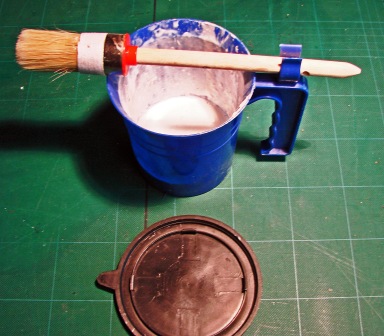 I think it's sold for cooks, etc, to put egg glaze on pastry, etc. Anyway it cost about 2 quid equiv. from one of those supermarket "cardboard pallet junk/odds n sods sales" we get here every so often, and included the brush and black cap.

I also use a much smaller brush for small glue areas, and sometimes pour it straight out of the jug then spread it over the job with a piece of notched cardboard.

The black clip-on cap shown is reasonably air tight, but for times when I'm not in the shop for a fair while I "reinforce" that lid by putting a piece of thin polythene over the jug then clipping the cap on top.

But after a while the glue inside still gets a bit thick. So far I've only just watered it down with a few drops from the tap, well stirred in. Seems to work OK, but I didn't even think of warming the glue up - seems like a good idea, I'll try it next time, thanks.

Re glue brands, most of those mentioned on the Forum don't seem to be available here, but there are other well-known mostly German brands. But to be honest I just buy a 1 litre plastic bottle of whatever seems to be the cheapest when I get to the shops. "So far so good" (as they say). Probably "any brand" and "watering down" are NOT such good ideas really - but the blue "jug" thingy works well for me (no nozzles to unclog and no squeezing required).