Screwfix have just contacted me to tell me that I need to call in the shop so that they can issue a refund as the compatible router table is no longer available.
I've just been online to find a replacement and it is proving harder than I thought, hence the reason for my post.
I'm at a fork in the road, whether to keep looking or to make one myself.
If I do decide to do the latter what plate should I buy which would suit the triton 2400w router.
Also, does anyone knows a router table that will house this router for under £150.
Many thanks
Parbynat
S

The router plate is not a problem, if you were spending more cash then I would suggest the Jessem prestige lift JessEm Rout-R-Lift Prestige (Metric) with Undrilled Mounting Plate otherwise look at Kreg, Insert Plate Triton Routers PRS4034 | Kreg | The Toolbox Scotland

Rather than get something for £150, you could make something a lot better, maybe buy a top and insert plate, then make yourself a frame and legs.
P

Thanks for the links.
I haven't researched yet but I'm thinking maybe 20mm ply for the top rout out the shape of plate then frame and legs, am I on the right track with the top?

I'll look for the thread, but a member here made his router table from a section of counter top. He used the router plate to make a template with MDF.

Update: Here is the thread. @weirdbeardmt used a UJK router plate for his Triton TRA001 router.

I'm not entirely sure in what order to present this, or indeed what the point of this thread is, other than a bit of show and tell. Today, I started building a router table. This was on the back of a random but enduring conversation with MikeK which started with me asking about the Triton style...

It may be outside your budget but after a lot of research I made my own router table and used this insert plate with my Triton TRA001 INCRA MagnaLOCK Router Plate - 7518-T | Wood Workers Workshop I also bought their template to cut the hole in the table but you could easily make your own. Here's my table all made from birch ply but you can use anything as long as it's low friction. Be aware that birch ply and a damp workshop are poor bed fellows as the ply gets black mould very easily - ask me how I know...

I'm very pleased with how it performs though 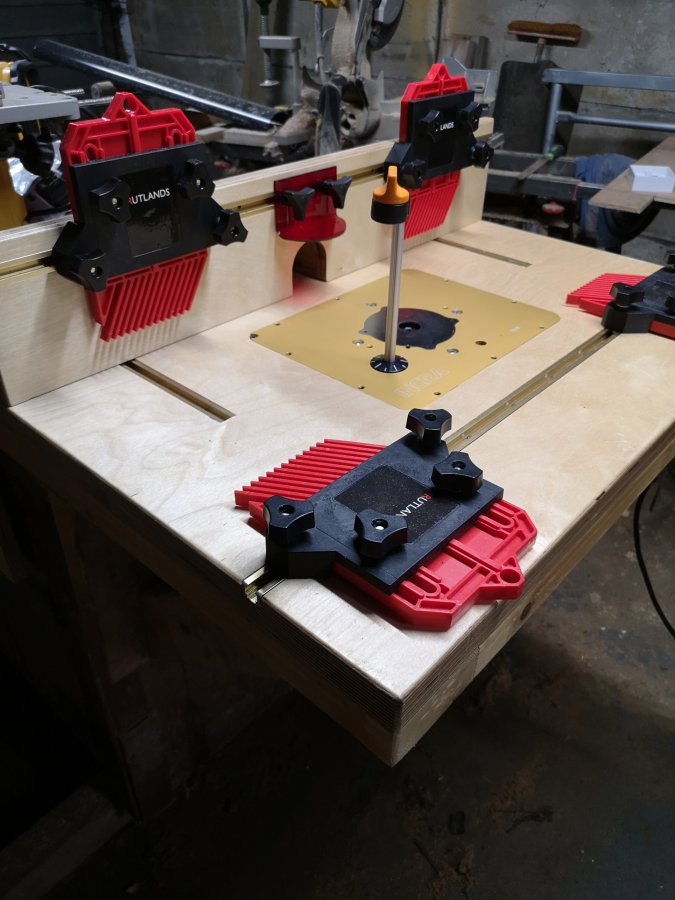 Axminster do a universal plate which is drilled for the Triton UJK 10mm Aluminium Router Table Insert c/w Universal Base
You would need to fettle the mounting lugs though, an easy job with a Dremel or file.
M

Flebay or FFX. I bought the plate and made the table to go around it. I also cheated and bought the Kreg plate levellers - makes the process really easy.
R

I have a Triton router table you could have but far away,South Coast !
S

Dennis made a video with the Incra plate with his Triton and an Incra lift with an AEG router, AUKTools is our UK router to use in the lift.

INCRA MagnaLOCK Router Plate - 7518-T is a solid aluminium mounting plate is the ultimate for achieving perfect cutting results at your router table.

He mentions he needed to drill for the Triton handle but our plate is pre drilled for the newer models below.

I own the same router, and I build my own table. It's not perfect but I couldn't go cheaper than that. I build mine from leftovers and damaged boards from Ikea's parking lot and with the help of a 3d printer.

Peter Sefton said:
Dennis made a video with the Incra plate with his Triton and an Incra lift with an AEG router, AUKTools is our UK router to use in the lift.
Click to expand...

I have spent a lot of time looking into routers, tables, lifts and cost, going round in many circles and with much thought to come up with the best engineered solution long term for me but still not actually proceeded due to round tuits. Basicaly I have broken the issue down into sections, one is the framework or legs, the actual router worktop, the fence, the router itself and finally the insert plate.

All are linked and need to be considered when looking at each section but I can see why it can be a nightmare for some, especially if on a tight budget. What I will say is that like so many things it is cheaper to get something right that delivers your expectations first time rather than a process of itteration and for some frustration. I use a Triton in a Kreg table which has been great but again we learn the limitations and see what else is available that then it makes us want improvements. The setup that @MikeK built is a great example of what can be done, I do believe he went through a process that was not direct and learnt as he went to get to his final setup and like me would have liked to have gone direct had we realised.

If you do not have a router and are just starting out but want something really good then you cannot go wrong with the Jessem or Incra lift with the AUK router motor because it is very well designed and engineered, the choice essentially comes down to plastic insert rings or metal ones held in by magnets. If you have a big router like the Triton and want to upgrade then the Jessem prestige is the lift to go for because in my opinion the precision and repeatability are better than the Triton lift mechanism which I have lived with for some time. If starting from scratch then do not let the price throw you off, Jessem lift with AUK is £764 and ready to go, the Jessem prestige is £309, a Triton TRa001 is £269 plus add in a muscle chuck for £70 gives a total of £ 648 so for about a £100 more you get what I believe to be the better option. Obviously if you have the Triton then it causes more issues with making a decision, but after a lot of thinking I will just sell the complete Kreg setup once I have built my new one based on the one Dennis from Hooked on wood built. This leads into my next issue, the fence which if you have precision in the Z direction then you want it in the Y direction as well but could easily make your own as there are plenty of good designs out there.

I like the Incra positioner but my problem is that like many sliding mitre saws it requires a fair amount of room behind to accomodate, there needs to be a shorter version as has been previously discussed on these forums and is what is holding up my new workbench/ router setup. There are also other good fences available along more conventional design lines but what I liked about the Incra was that you can make it easily detachable so it can be put out the way when not in use. Hooked on wood's design used a homemade adaptor but you can also buy one from Benchdogs, Incra and for a design where you want to incorporate the router into your workbench this is important.

The worktop itself can easily be made, just deciding what material and really the same for legs and frame so these are not big issues.

Thank you for all the posts, it's good to know that this forum that I recently joined has such a dedicated bunch of folks.
I'm probably going to receive criticism for not using a plate but after watching a video of a guy called woodworking with Wes using his homemade router table making shaker doors I decided to copy his model.
It's very basic and nothing like some of the great images i have seen on here but total build cost was around £25.
I'm just on my way to toolstation to pick up 2 F clamps that will hold the guide rail in place then this afternoon I will give it a go.