D_W said:
I actually kind of like cosman. I don't have much of anything to learn from him, but I've let loose in comments on some of his claims a couple of times and each time I've been kind of brisk, he's responded with courtesy. He wouldn't have to. I'd be glad to meet him in person - and while he does promote his business, there's something a little more genuine to him than there is to paul. I could be wrong - we all could, and pretty much all the time.
Click to expand...

Just as an addition to that, I became a little bit fascinated with Cosman's Wood-Hinge earlier this year, seemed like the answer to everything I'd been looking for in Jewelry/small box design. I mastered his dowel making jig, bought the appropiate core box router cutter from Wealden's, made some prototypes and Voila! it Verked!

Except for the hinge pin. This requires drilling a 1.6mm hole absolutely dead centre on a piece of 6mm dowel, despite months of thought and numerous jigs, i just could not get it to work perfectly, Rob of course doesn't have this problem, he came up with a rather ingenious wee jig that solves the problem, trouble is it's £50.00 (roughly)

After a few more weeks of getting nowhere, I ordered one. ETA 5-6 weeks, fair enough.

About 4 weeks later, the Monday before MayDay, I got a call on the mobile phone, unknown numbers I always answer the call, but say nothing, if it's one of those automated scam calls, the line disconnects almost immediately, but this one said "New Brunswick" in the display, after a second of wondering to myself why that is familiar, a voice pipes up,
"John?"
"Yeah?"
"Hi there, it's Rob Cosman, just wanted to thank you for placing an order with us"
"How is your Bank Holiday there in England?"

Took me a second or two to roll my jaw back in, then once realising what the hell was going on I politely replied our B/H is NEXT Monday, our Canadian cousins celebrate Victoria Day apparently the week before our MayDay.

Anyways we had a really interesting chat for about 10 minutes or so, about the Wood-Hinge, offshoots from that topic, and just generally two Woodworkers having a natter.

Afterwards I tried to work out what happened, and came to the conclusion that he must randomly phone a few punters/donations/buyers to thank them personally, fair enough and all credit to the man for making the effort!

Agreed that wood hinge is fantastic.
This method seems like it could work well for drilling those dowels.
(clipped for someones convenience)

Ttrees said:
Agreed that wood hinge is fantastic.
This method seems like it could work well for drilling those dowels.
Click to expand...

Tried it, failed. The slightest movement in the quill throws it off centre on the finished item.
Honestly, I spent months trying to figure out a way, to no avail.
Even with Cosman's jig, it can be 50/50 sometimes, depending on grain, how the drill bit makes initial contact etc

Sorry for the thread derailment BTW, back on topic now . . .

Noted for when I give it a shot, did you try a center drill for the job?
J

Could clean it out with the right size bit afterwards

Center and spotting drills are traditionally used to make a conical hole for a lathe center in order to make a starting point for a standard twist drill, designed to prevent the twist drill from walking.
www.ebay.co.uk

Edit: the thicker center bit would make clamping it in the vice a bit more trustworthy.
Might as well add that having your table clocked is important,
Haven't got one of those, but well impressed with this hack I found on youtube. 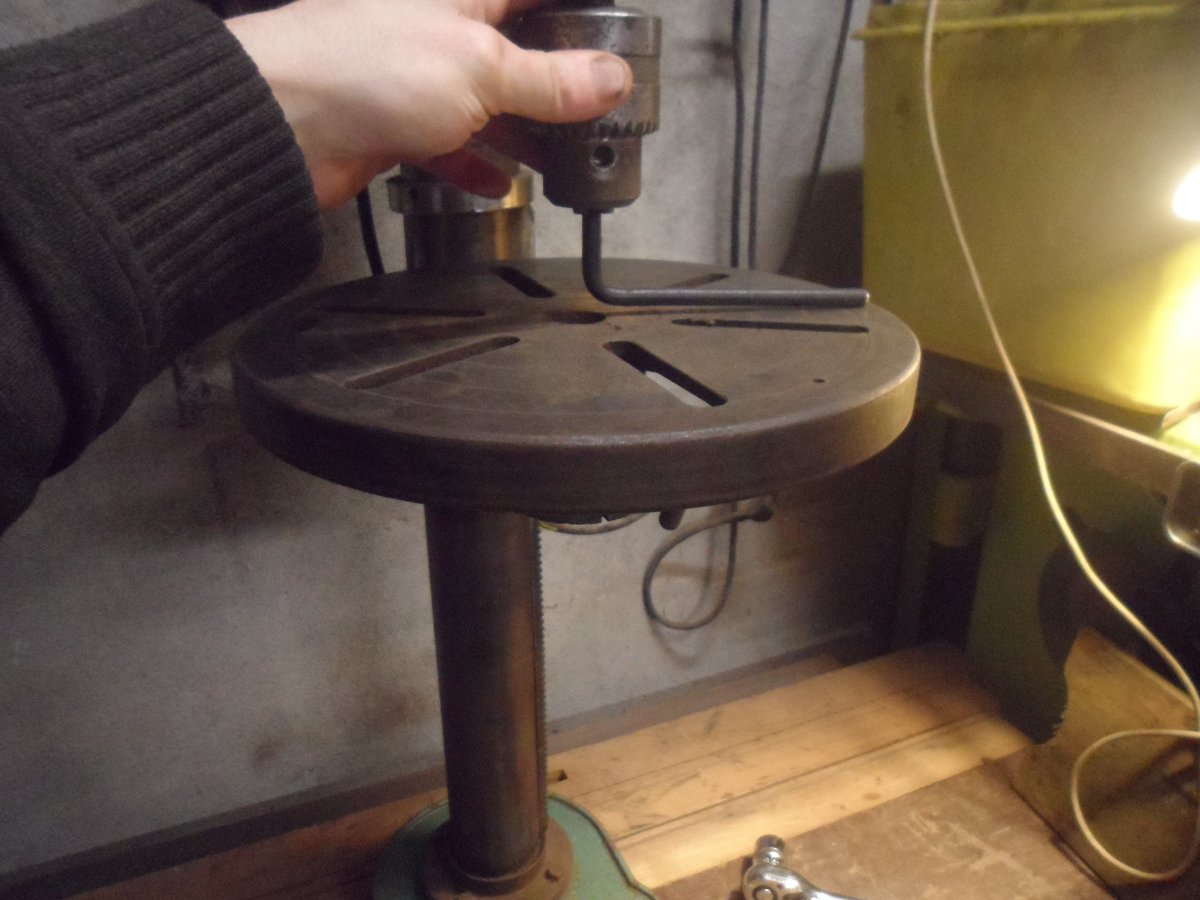 Pondering a bit more, seems likely possible that one could even make their own version of the tool, using some round stock with these center bits
Last edited: 17 Aug 2021
J

Just for completeness sake (and to get the thread back on topic, hasn't there been a thread about Cosman's Wood-hinge??)

The closest I managed to get, was using two pieces of 10mm Perspex/Polycarbonate/etc.
6mm hole in one piece to take the dowel, 1.6mm in the other piece for the drill bit, place one in front of the other, close one eye to disable the stereoscopic effect, and line up the centre, by "eye". The reason for using Perspex/Poly etc is that you can see the tunneling effect, helps to align everything.

It works, but not accurately enough, and of course the 1.6mm drill bit will eventually become less and less accurate through wear on the perspex

Is this the hinge that requires Cosmans centre drilling jig at £130 from Classic Hand Tools.

If it is, where do people buy the correct dowel making cutters. I never like the look of his home made dowel maker?

The Pros and Cons of looking out for each other

E
I Spent Five Days At The Windsor Workshop ...
2

Small walnut side table with drawer
6 7 8