Is there any way I can repair my air hose that has started leaking? You can see from the photo that it has cracked quite badly and it has started leaking over the past few days. It obviously needs some special kind of kit to re-attach the end after cutting a few inches off the pipe.

Are there any firms that do this? 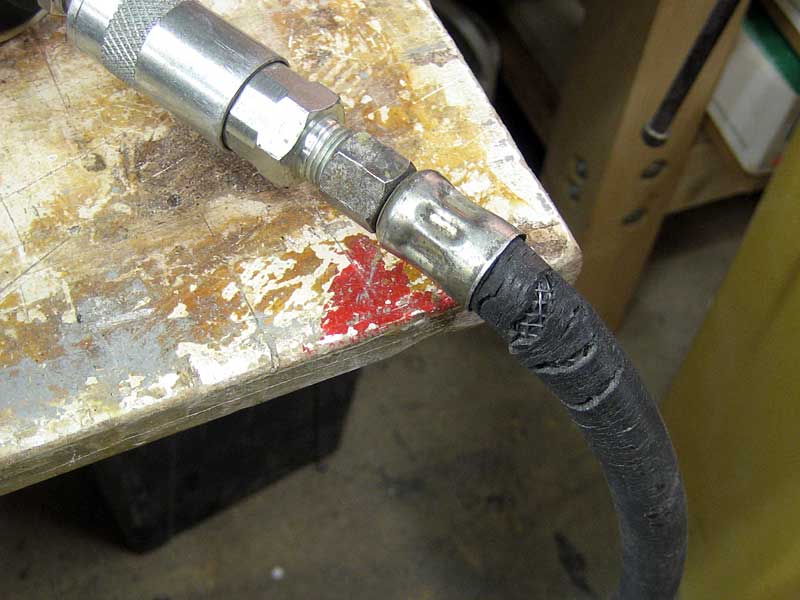 Bin it Brian. They are cheap as sliced fried potatoes so not worth the risk. I had a hose go once whilst working in a repair shop, it nearly took my eye out and scared the merde outta me.

If the rest of the hose is still good, you can get a barb connector and secure the hose with a jubilee clip. Probably worth cutting a few inches off the end to get rid of the damaged section.
If the hose is looking like it's seen better days, I'm with Steve - buy a new one!
D

studders":zrfbsjhp said:
Bin it Brian. They are cheap as sliced fried potatoes so not worth the risk. I had a hose go once whilst working in a repair shop, it nearly took my eye out and scared the merde outta me.
Click to expand...

Replace it, when I was a diesel fitter we used to repair air hose with lengths of brake pipe and jubilee clips until one day a repair failed and hit the boss' bare arm! He let out a little whimper and ordered " no more repairs to airlines"

I use 'O' clips as a neater solution than Jubilee clips, but otherwise I'm with them Brian.

Searching online they are a lot cheaper than I expected so bin it is then, thanks

Repair them with the proper sized airline connectors and O clips, I normally put 2 on each side of the joint.

That one looks like its barely worth it though as above.
E

Looking at how it's failed, (a) it's pretty old, and (b) it looks like it could do with some strain relief at the end. When you get its replacement, it might be worth slipping three or four lengths of heatshrink onto the main length of hose before you fit the female connector on. If you make them about 6"-8" long, you can shrink them down over the crimp and the first part of the hose - you'll probably get two on top of each other, so make them slightly different lengths, say the first at 5" and the second at 6-7". That makes a neat strain relief.

Why three or four lengths? If you leave the others to just float about on the hose, you can patch it if it ever suffers any damage, just by sliding a piece to cover the area and shrinking it on. We used to do this with very expensive camera cables and audio multicores in the BBC, for outside broadcasts. Terminating them to a plug was hugely expensive, and, unless sent back to the factory (BICC, if I remember correctly), the workshop-fitted plug wouldn't be waterproof. With two or three loose pieces of heatshrink, you could make a fast but good repair.

Obviously, this only applies to damage to the outer sheath. If there's the slightest hint of damage to the braid, you should either scrap it or lose a foot or so from the end and get it re-crimped.

I have a semi-industrial Kaarcher jetwash. When we moved in about 16 years ago, I used it to clean the pebbledash before painting. Most of the time I used it with a fat, high pressure extension, but was alarmed to find that the thinner final hose to the lance was being cut up, whenever it lay over the edge of a scaffold board. At full pressure it became rigid enough for the vibration from the pump to cause a sawing action. It didn't cut through or damage the Kevlar braid and I was able to repair it: heatshrink over the damaged rubber outer, followed by covering the entire hose in nylon spiral wrap, of the sort used in electrical installations. That's worked really well - the nylon takes a lot of scuffing and the hose isn't damaged.

I have to replace it soon really (16 years is enough!), when I do, I'll do the same to the new one - spiral wrap it. I still do the loose heatshrink thing on audio multicores, but rarely need to make them up these days.

Eric, your idea of strengthening it sounds like a good idea to avoid problems down the line or at least make the next one last a bit longer. What is this shrink wrap and where do you buy it please?

Heatshrink sleeving is used in electronics, also to put round bottle tops etc. It's fairly expensive if you get it from Maplins, but cheaper from eBay etc. It usually shrinks to between 1/2 and 1/3 its un-shrunk diameter when you apply heat from a hot air paint stripper or similar. You can use a blowlamp if you 'waft' it,. but it's a bit hit and miss. It comes in lots of different sizes and colours, including clear and white, both of which get used for labeling purposes. There's also a waterproof seal version where the inside goes all gooey when you heat it, so that it seals as well as shrinks (probably not suitable though).

Try http://stores.ebay.co.uk/Mister-Shrink?_trksid=p4340.l2563 or someone similar. I haven't used them but their prices are fairly keen and they stock a good range.

As I said, you can shrink heatshrink over heatshrink fairly easily. If the innermost piece is the shortest and the outermost the longest, it looks neat and doesn't catch easily on things. Do one layer at a time and let it cool between layers. Three ought to be plenty.

Try this stuff, bearing in mind that ideally the shrunk diameter should be just slightly smaller than your hose OD. If the shrunk diameter is bigger it will be loose, if it's a lot smaller, you may have difficulty getting several pieces over each other.

This is a link to spiral cable wrap. It's not any good for strain relief, but it will help with abrasion and you can fit it over already-terminated hoses and pipes (but it does take ages to do!).

Also try Rapid Electronics, CPC/Farnell and RS Components (although they're not usually cheap!) for both heatshrink and spiral wrap.

Thank you for the explanation and the links. I am going to do as you suggest and put some of this stuff on the new hose when it arrives.

Whatever you do, never mess with air. It can do all the same dangerous things that water can do but you can't see it ! Two people of my experience have died, due to the assumption that air is a good way to clean under the fingernails!

Proctecting the hose against chafing is wise, but as soon as it shows any sign of defect, GET RID!

I
Compressor "easy start" valve - what's it properly called? Where can I get one?