I've taken to bidding what I'm prepared to pay and no more, then 'walking away' and vowing not to return until after the auction closes. Usually I'm left wondering who has so much money, as things seem still to reach silly prices, but it's worked twice recently in quick succession - a type of camera bag I've been after for about seven years (!), and (more to the point here), a Record #20, in pretty good nick for £42 + postage.

It's the Mk3 type (I think). but old enough to have been well made. The iron is pretty much full length ('crucible cast steel', so it can't be that new!). Apart from a regrind+sharpen and general clean it's good to go.

The only minor issue is that the lock screw for the curvature adjuster is missing. I'd guess they often go walkabout, as there's nothing to retain it and it's probably not really needed much. Does anyone who has one have an idea what the thread is, and if you do, please could you have a look and see if the end of the screw is flattened off, rounded (most probable), or pointed? My guess is 3BA or close to it, but I'm probably wrong. I'm hoping it isn't some arcane special plane thread! 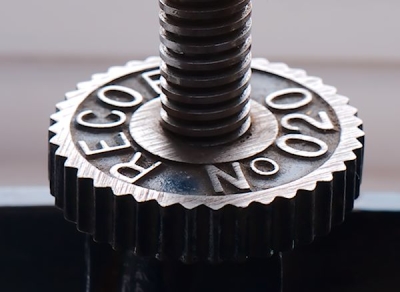 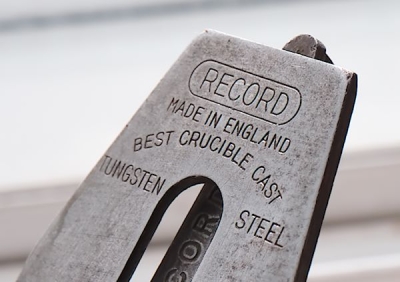 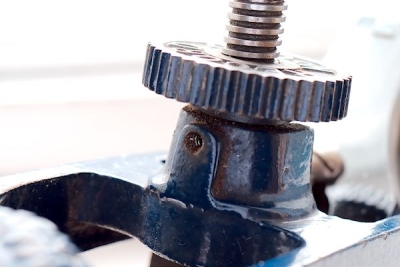 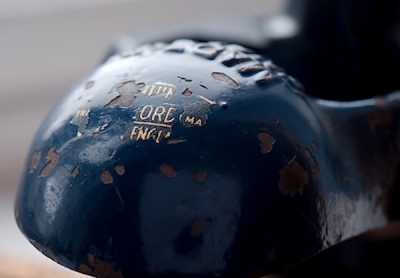 I've a couple of general #20 questions too: The frog is removable, and slides into place. It looks like you should tune it against the block fixed to the flexible sole, so that the blade doesn't chatter, but it's not clear. Is that right?
Similarly, The bottom end of the frog has a bevel so it will slide forward and backward if you wanted it to against the throat block. Is that what it's for (as there doesn't seem to be any other sort of throat adjustment really)?

PS: In case anyone's interested, the pics are via an Pentax K-series 50mm f4 macro lens, mounted on the front of my Canon 30D, with a 1cm extension tube to make focusing easier. I was using the camera for something else and didn't want to re-rig it completely!

Hi Eric, I can't help with any details, sorry. The Record number 20 box I have has a Stanley 113 in it. That has a different clamping method. But if no help arrives screw a soft wooden dowel into the hole, when unscrewed you have the pitch displayed. Nice purchase by the way. I would have thought the main, square section, thread might have some visual evdidence of the shape of the screw end. It certainly would if it were pointed at least.

Thanks XY - the dowel trick is a good idea, especially.

The locking screw actually bears on a hidden flange of the knurled adjustment wheel, which slides into the blue casting from the other side (this has to be done at assembly, as I can see no way to get it apart once the sole pivot pins are driven home at each end of the sole plate). It's a bit odd - over-engineered possibly, but I think it's to avoid marking the main thread (which looks like an Acme form to my untutored eye).

I'll try with a matchstick later on.

I have a Record 20 with the adjuster knob missing and other problems, but it does have the locking screw.
Its 0.182" dia and 24 tpi.

The sole adjuster rod screws in to the base with a smaller thread, and you are correct about the frog assembly sliding out after the pins have been removed.
But I wouldn't try it my self, mine had got diffenent pins and one of the thin forks in the casting broken off. the sole was on the wrong way round on it, so I don't know it the fork was broken before I pushed the pins out, they are very loose.

I might be up to selling it for spares, I was going to braze the fork back on and try to find an adjuster knob, but I have a Stanley No 20 so its not urgent I get it fixed.

Hi Eric, Pete. From Pete's measurements it sounds like a 'bog standard' 3/16" BSW. The spec for those is 24 tpi. 3/16" is 0.1875 inches. Worth a try anyway. From your description it sounds as if the locking arrangement is to stop the knurled knob turning. Personally I'd start with a flattened end. A point will mark the flange and make fine adjustments difficult, a domed end would do the same to a lesser extent but give better locking perhaps.

Thanks, both of you.

I keep a box of odd imperial thumbscrew-ish things (by which I mean the knurled knob kind of 'thumbscrew' ). I'll see what I have.

I got the Meths and Brasso out earlier. The sole plate came up a treat. I don't think it could have ever been used much -- but then I'm not sure how much I'll use it really! Anyway, the blade needs grinding and honing. There's a lot left but the bevel is somewhat of a mess.

The screws that secure the fence on a Record 735 fibreboard plane are also the same thread, although with a flat thumbscrew head. The "grooving attachment" screws on the same plane might be a better bet as they are also 3/16" BSW 24tpi, with knurled head.

If you don't have anything suitable in your box let me know how long the threaded portion needs to be and I'll see if I've got something.

Drop me a PM with your address and I'll pop it in the post...

Being brass it won't damage the thread of the radius adjuster.

You guys are brilliant!

I'll have a look here later this morning, and if I haven't got anything suitable I'll be in touch.