Could give the local council man a coronary ! 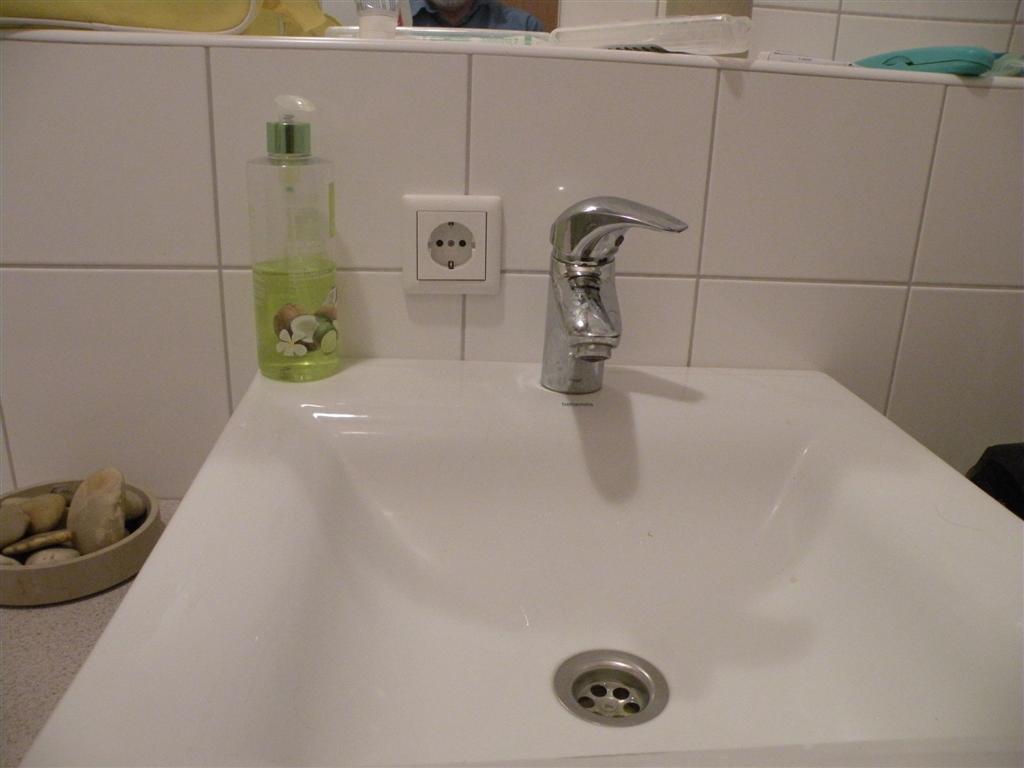 Looks like a pretty common arrangement in Continental Western Europe - have seen similar in lots of apartments and hotels in Germany. Interesting question is whether the accident rate there is any higher than it is in the UK with Part P and all that.

German standard electrics, but in this instance 66 deg North, and in a wet room shower area.
Needless to say not knowing what protection if any was behind it, it did not get used.

In a recent revamp of two large bath and shower rooms in my Sons home in Bavaria Power sockets are positioned no different to elsewhere, co-located with lighting switches and also above the wash basin area for shaving and hair dryers etc. Only requirement being RCD protection specific to those circuits.
The house also has 420 volt 3ph in the kitchen for the cooker.
D

OK, I have seen similar on my travels.

What happens if you drop your shaver into the washbasin which might be filled with water.

Then you pick out your shaver, are you dead, or do you just say ouchhhhhhhhhhhhhh! ?
A

Yup, that's pretty much what you'll see where I live too (Switzerland), EXCEPT where I've done some work indoors! And BTW, a bit like UK, just about any sort of wiring work is only supposed to be done by qualified & registered tradesmen. I'm certainly not either, but when the bloke for the "local council" came round todo some checks he saw some new wiring and checked it out (continuity and insulation resistance) and it passed. Fortunately he didn't ask me "whodunnit" (eitherwise I'd have been forced to lie!).

And back to powerpoints etc in the bathroom n shower, they' are no cord pull light switches here either, AND don't forget that neither Swiss nor German plugs (they're not quite the same!) have a fuse in the plug either.

But funnily enough (I've now lived there for 20+ years) I've never heard of anyone being killed by it all, let alone getting a shock. I'd guess that's not exactly "stop the presses" level of news, but with that sort of setup you'd have expected at least some incidents surely, and therefore at least some news reports, even if only in the local rag/freesheet?

Do RCDs have the capability to react that quickly?

Years back I was told the lethal shock is 20mA through the heart, although according to Wikipedia* it's more complex than that and mentions 60mA as causing fibrillation (disruption of the heart rhythm, fatal if not dealt with ASASP).

In any case, it's harder to achieve than you might expect, if you're right-handed (unfortunately I'M left- ). Small RCDs usually trip at 30mA, so if you assume the current is distributed through the body, it will probably not be lethal.

In terms of speed of response, RCDs are quite fast, but speed isn't as critical, apparently.

In any case, all this "dropping the (whatever) in the basin/bath/shower" thing is a red herring in a properly protected environment. I'm not a great fan of earth bonding (the rules are silly), but one of its good points is that, like all earthing, it encourages trips and fuses to operate. In every case, a good earth should mean that the circuit becomes dead very quickly, hopefully before lethality conditions can occur.

And in any case, lethality is caused by a path through the person, rather than "being in the presence of". So you're more likely to be dedded if live and neutral/earth are across your two hands, than across two fingers of the same hand. I've had the latter sort of shock on many occasions, and it hurts, but I'm still here!

There is an argument that 'shaver' isolating transformers in bathrooms don't actually help matters. The good thing is that you can only get a shock if you come between live and neutral, but they render RCDs pointless.

American bathrooms (at least the umpteen hotel ones I've been in) seem to use RCD socket plates. So the reset is right next to the socket itself. I'm not sure if this is a good thing or not!

One of the big factors in fatalities at lower voltages is the contracting of muscles: touching with a fingertip something you believe to be live is unwise (on many levels!), not least because the finger muscles will push the fingertip more firmly onto the object.

Older electricians I know wear no rings at work, and keep one hand in a pocket whilst working on certain tasks. If shocked the path through the heart isn't as well defined as when it's through one arm, across the chest and through the other.

*http://en.wikipedia.org/wiki/Electric_shock (couldn't get URLs to work then realised I'd missed the protocol bit off the front!
D

Thanks for that very interesting and informative info. I had a shock once when I was around 20 years of age, I was messing around with the wifes sewing machine and forgot I had not turned it off, I was thrown across the room.