Anyone up for sharing a moose antler with me? The whole thing is £35 - £45 and much as I'd like a crack at using it, it's a lot to spend to use maybe only a small piece and then have the rest kicking about (in space I no longer have) ad infinitum. This is moose, not deer antler - it's much more dense.
I'm not committed to buying it yet and the guy has about fifteen, so I've time ........... famous last words ....... :lol:

I'd cut a chunk off one for you but don't know if your customs folk would seize it. What do you want it for? A pen?

Who knows? Knife handles, mainly, but possibly inlays etc. - I've not worked the stuff so I can't say. I'm told it's extremely hard, though, which I can believe from the weight of it. Might make an interesting pig sticker handle. :lol:

Give me an idea of what sizes you want and I'll cut them for you. You must wear a good mask as it is really bad for the lungs. The tips are hard but inside where the marrow was it is porous.

See if you can find out if it needs certificates etc. to import. Can't provide those.

Here are pictures of the bits I have. A guy gave them to me last year and he had cut most of the good parts to make pens. I haven’t done anything with them so you’re welcome to what you want. The varnished one was mounted inside on a wall since before WW2. The other weathered one looks like a shed antler. Fell off at the end of the rutting season.

Thanks for the offer, but it's the smaller parts I'm really interested in. I was wondering what I could do with those wide flat bits if I bought one.

I'm not too bad with bad smells (used to rotting carcasses) but working with antler is not pleasant.

No problem Phil. If I run across some complete ones I'll let you know.

Search "Moose Antler Carving" and you'll see the possibilities of what can be done with the shovels.

I think a half tang knife could use the edges of the shovel between the antler points, fit so the top of the tang showed, perhaps with some nice file work. The curved edge would be where the fingers lay and the marrow was up beside the top of the tang. A 3/4 wrap around sort of look. It would look interesting if the shovel was cut up and after flattening somewhat, stacked and glued together. Sort of like leather washer handles. Many turners make rings from antler too. Lots of possibilities only limited by your imagination and time on earth. (hammer)

If you get it hot when you work it, it can stink. More so with fresh (under a year) rather than seasoned and dry. I don't have a good sense of smell so I don't find it too bad when making pens from it but the dogs sure sniffed around looking to see what was in the air. :wink:

I've worked quite a bit with antler, not moose but Muntjac roe red sika fallow. I'd say it smells but it's bearable.

Inspector":3khvyrsp said:
The other weathered one looks like a shed antler. Fell off at the end of the rutting season.
Click to expand... 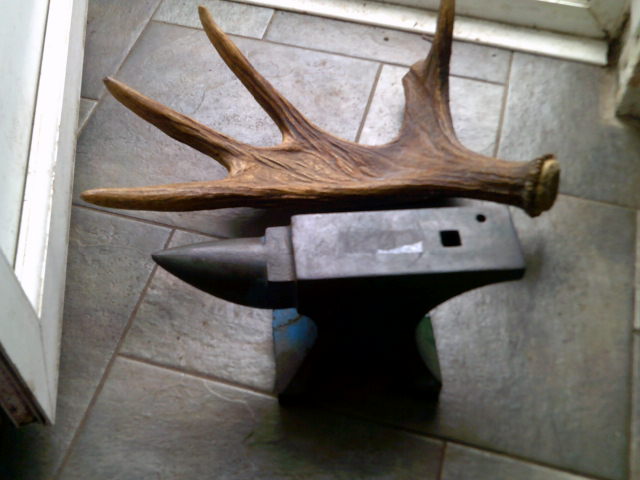 Bit the bullet. It's about 20" long. I paid £20 for it which I didn't think bad. I think he knocked it down a bit as it wasn't any use for display purposes as it already had a piece sawn off.
The anvil is another £60's worth of work I bought myself. No maker's name but hard, clean and obviously not not made of Chinesium.
It will be a while before I use either.