Magnets. How do they work?
Are Unicorns dangerous when cornered?
Why doesn't Gravity apply to Hugely Obese People? If anything I'm less attracted to them and their extra mass if I'm honest.

These are some of the big questions I won't be addressing in this thread. Sorry.
Instead I thought I'd share a little idea I had. :roll:
I have a magnetic tool strip on the wall in my shed. It's ok. But it's on the wall and I was wondering how to fix it to the bench I am attempting to build in the worlds slowest record time. Just for those times you run out of hands and teeth and need to put summat down right near you without it falling on the floor. Can't just be me right?
Right?
(If you look up again here, it does say Possibly in the tread title. So... )

Got to looking on the net and came up with this idea. Sure it's not new but I've never seen it on a bench build on here so someone might like it.
Yeh. Not everyone.

I mined mine from the Rare Earth Magnet Mine in mein back garden but if you don't have one of these and your own 2 blind pit pony named Dave and Chas, you can probably buy them on the internet too. I got pretty powerful ones but if I was buying them I'd get the most powerful ones I could get. Really.

Also, apologies in advance because I recently broke the camera cover on my phone so the picture quality is dire. But I was doing it today so it was that or no pics at all.

Drill a hole. This one's 20 mm because that's the size of the dowel I have. Science Magnet Rings of Mystery are 19mm, polo shaped. 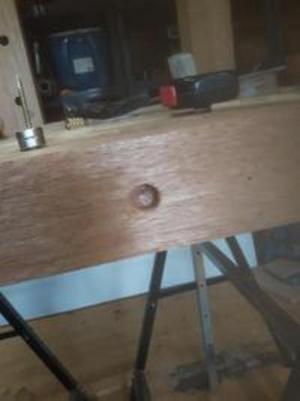 You can improve the strength by adding them together! (to a point, surface area is involved). More Witchcraft! :shock:
You can spend a while faffing about with getting the hole the exact minimum depth for maximum efficiency as I did for a while there. :| Unless you have some spare washers. 8) 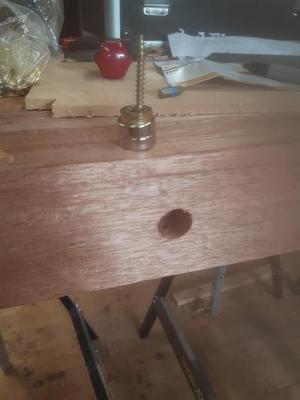 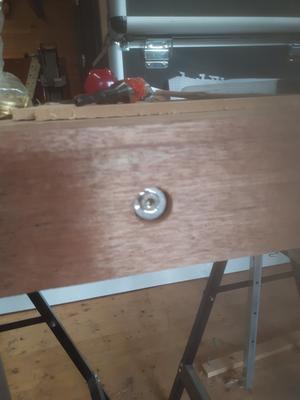 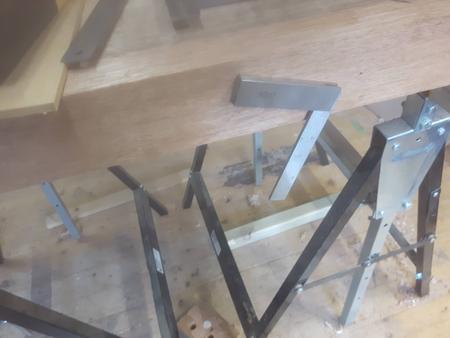 *Excited gasps!* *quieter murmurs of witchcraft from the back* * Especially from the Isle of Sheppy* :0

Except. In the spirit of true ground breaking scientific discovery I should point out that the above pic hasn't been plugged yet and will doubtless lose a bit of it's science magic when I cut the dowel flush. I will update tomorrow for more proper Science Research after I trim the dowels. 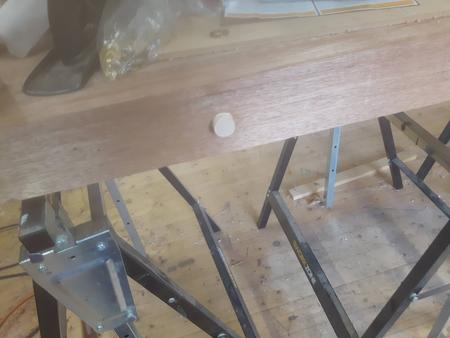 Toss up between it actually staying glued in and losing magnetic strength. Probably about 3mm. Hence the call for Proper Strong Magnets.
Have two (x2 rings) on the back of the bench and enough to fit two (x3 rings) on the front. Won't be everyone's cup of tea but at least I'll always have my steel rules/ pencil sharpener/ marking knife to hand.

Nah. Weigh Chris vs a duck first....remember the Python scene?

Mad I tell you, absolutely MAD!

(P.S. As a Kentish Man - originally - the Isle of Sheppey has that extra "E". Didn't think my eyes were so good, did yer!)

Cheers fellas! Quick update. Chopped off the surplus today and they still work. Woo! Probably lost a small amount of strength but easily good enough to hold smaller items. I wouldn't leave my squares anywhere so precarious anyway but the magnets still hold them. For the sake of cost, i'll install the 3X ones on the front and leave it at that. If I was starting again out I'd buy the real super strength one and pay a bit more.
(Okay okay... I'll admit I don't have a magnet mine in my garden. More's the pity. Even sadder news is I don't really own two blind pit ponies called Charles and David. ) I know it's a shock but there it is.
Again, sorry for the potato quality of the previous pictures, I took a couple more today but they are so bad I can't post them. Need to dig a camera out. Bench is actually nearly there now so I will post some pics of that I suppose. At some point. Let's not get excitable.
Cheers now
Chris

I've been advocating something similar in the wood turning section.
Post #1218036 in tips-tricks-t110759.html
By attaching a magnet to the end of a pencil it rarely gets lost in the shavings or if you inlay a magnet into the handle of a paintbrush you can hang it anywhere metal.
I use a spot of superglue to make sure magnets stay put & don't come away with the tool.
W