Hello all, I'm a newbie starting out in woodworking but have very limited space and limited budget. I bought a Keter portable workbench rather than B&D Workmate based on poor reviews the Workmate gets nowadays, but am having some regrets and wondering if there's anything to do to make it more usable.

The main problem is it's not very stable and tends to move a lot when sawing and chiselling. The supplied clamps are more ok for large pieces but not so much for smaller things.

I know it's typical to blame tools but having followed Paul Seller's video on mortise and tenon joints, it was a real struggle to get stability and I'm sure this was partly to blame for imperfect cuts.

Any ideas for making this more usable?
S

I hate to break it to you, but a work mate is not for hand tools.

They're for light DIY, with power tools.

I had this same problem a few years back when I got back into woodworking. You need a traditional workbench that has mass so it won't move or rack on you.

I started out in a 2m x 2m shed with a workmate. This was quickly swapped out for a custom bench with a plywood top. Still terrible in many ways but compared to a workmate it was a huge upgrade.

So you've a few options, but I would put the workmate to one side or stick a MDF top on and use as an MFT.

Hello and welcome to the forum.
As said already, unfortunately that thing is for potting plants, not hand tool woodworking.
You need a workbench, here's some options for you which might be of interest.
Have a look at this video (its cut to the workbench part)
Some trestle ideas from Chris

Or these things look like something that could be tweaked a bit
A smooth heavy door "solid core" I'm told, which I thought were fire doors because of the label, might lend itself to these designs.
One could add an apron to counter any sagging, some big f clamps can be bought for about 9 euros, so about 7 or 8 pounds in Lidl.

Clamps like these are about the most versatile thing in workholding, the only gripe is their not quite as handy as other methods, which
have limited versatility compared.
Get a good few of them when there in, you won't be sorry, likely the best value clamp you can buy, as the swivel heads, last compared to the cheaper ones you will stumble across.

The pictures of those two knock down benches are taken from a huge workbench thread titled "workbench smackdown" on another forum.
All three of those examples make use of the wall for the lateral force when hand planing.


Might be worth seeing if something local is out there, could likely get one for the price of a nice Record 52 1/2 alone. 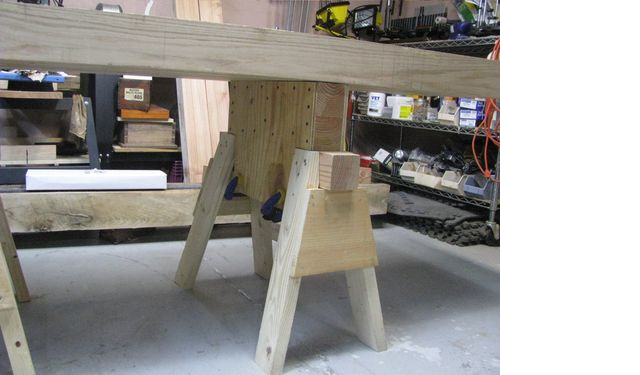 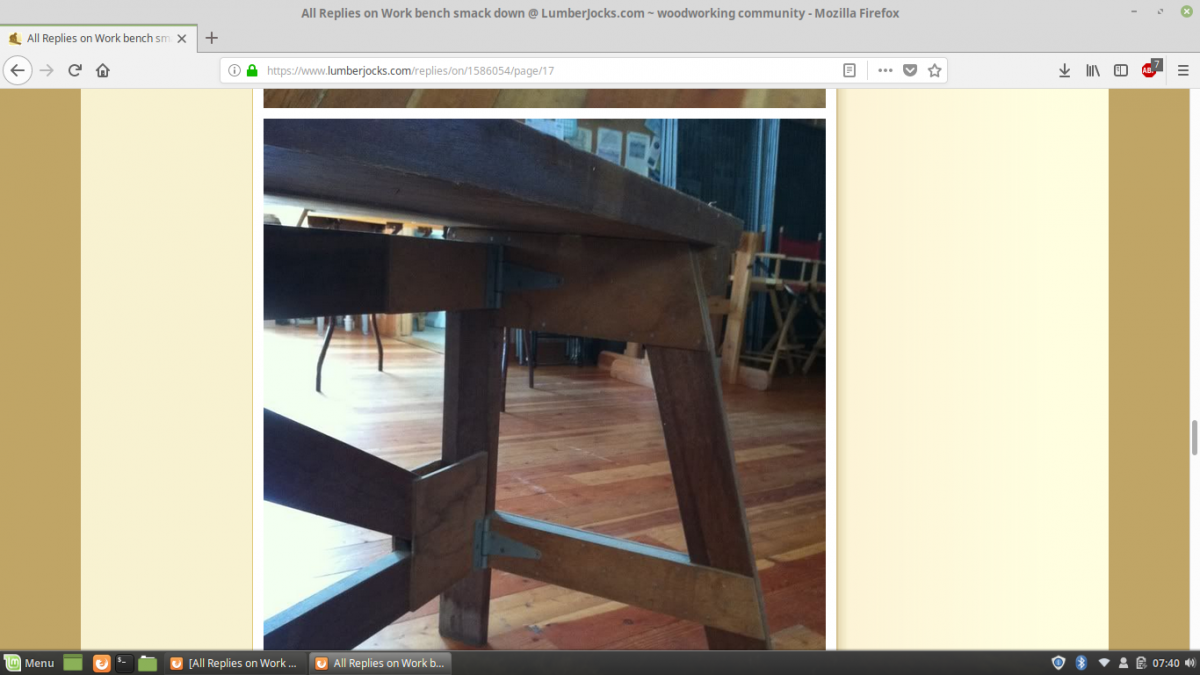 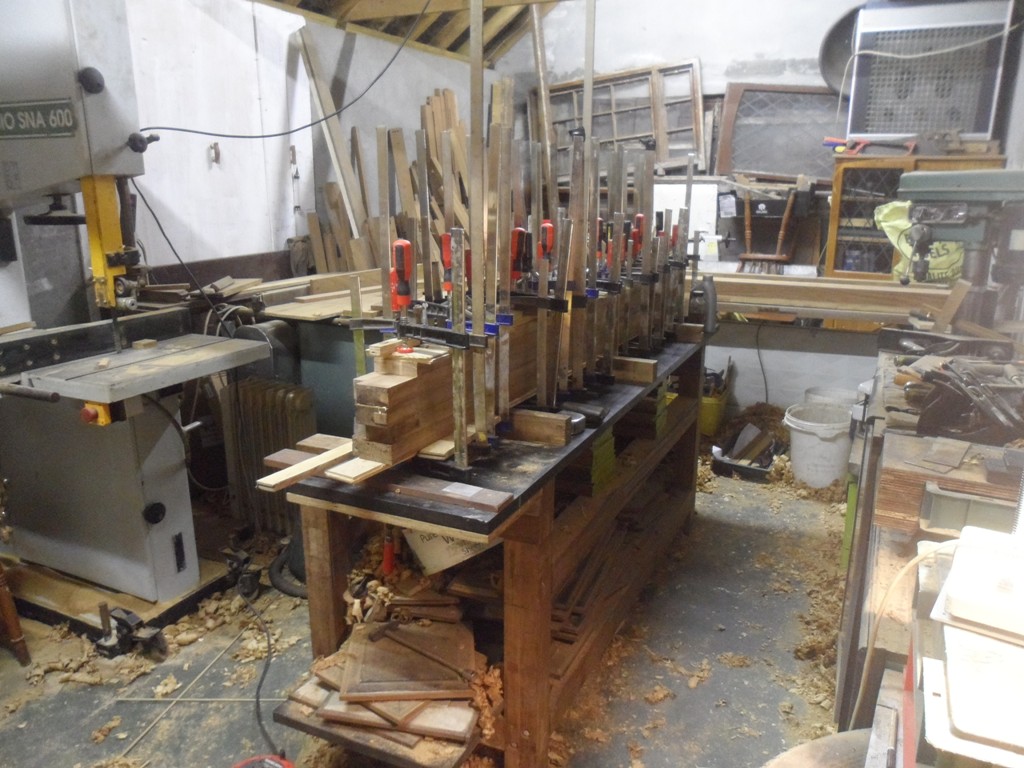 Hi and welcome to the forum. I have a Keter collapsible bench for use when doing stuff at home. It is a great bit of kit if you are using power tools, however it is not intended to be a handtool bench. Yes, I do do hand work on it but it takes a lot longer as I almost have to work in slow motion. You can add weight by putting stuff on the lower "shelf" or increase resistance to wracking if you have some way to prevent the feet moving and are able to have the edge opposite to where you are applying force braced by something. It still wont be anywhere as good as a proper bench though.


Or, a Roman bench shown below

Thanks for responses and ideas. I agree the Keter is not ideal for woodwork. Main issue I have is space (I live in a flat) and can't leave a large workbench out which was why it was a choice between Workmate and Keter - the ability to fold and store away was priority 1 and I can store the Keter in my balcony.

I found a chap here, Stu_2, who was selling Keter compatible MFTs a few years ago which seems like a good compromise. I've left him a message and also contacted a few CNC companies with a sketch of something similar which would add weight (and hopefully stability) and still give me the ability to store it all away.

Hopefully at some point in near future when I move to a larger place I can get myself a proper workbench.
J

I have personal experience of the keter workbench. We put a planter 80cm cubed which probably weighted 30kg on it and it broke.

I think a original workmate is a better bench.

Otherwise a 3/4ply and 3x3 legged table is better tbh.

The Triton super jaws is superb for holding power , sturdiness and convenience. I’m chopping out morticer with mine now.
K 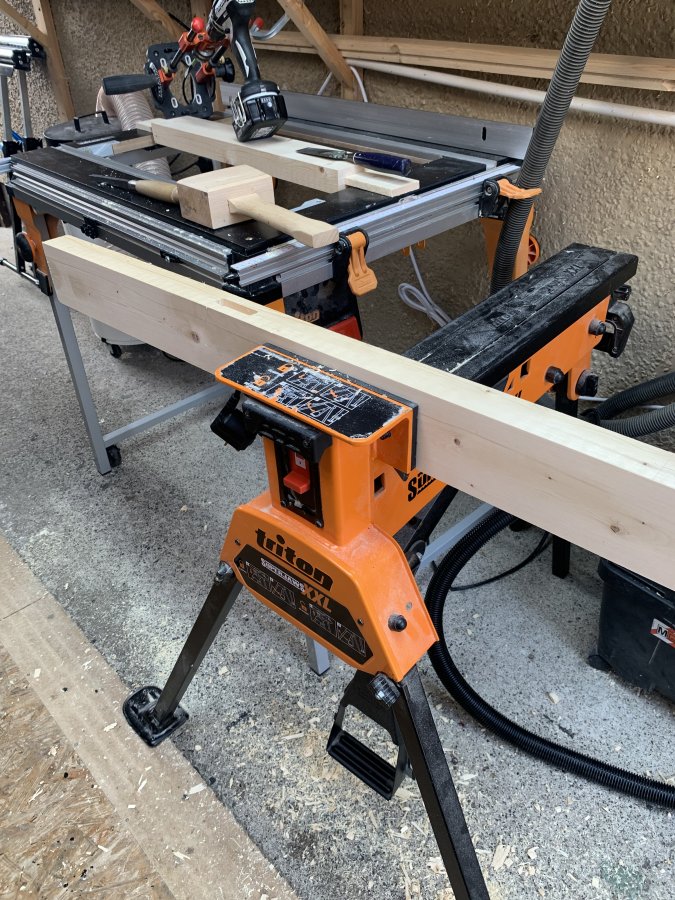 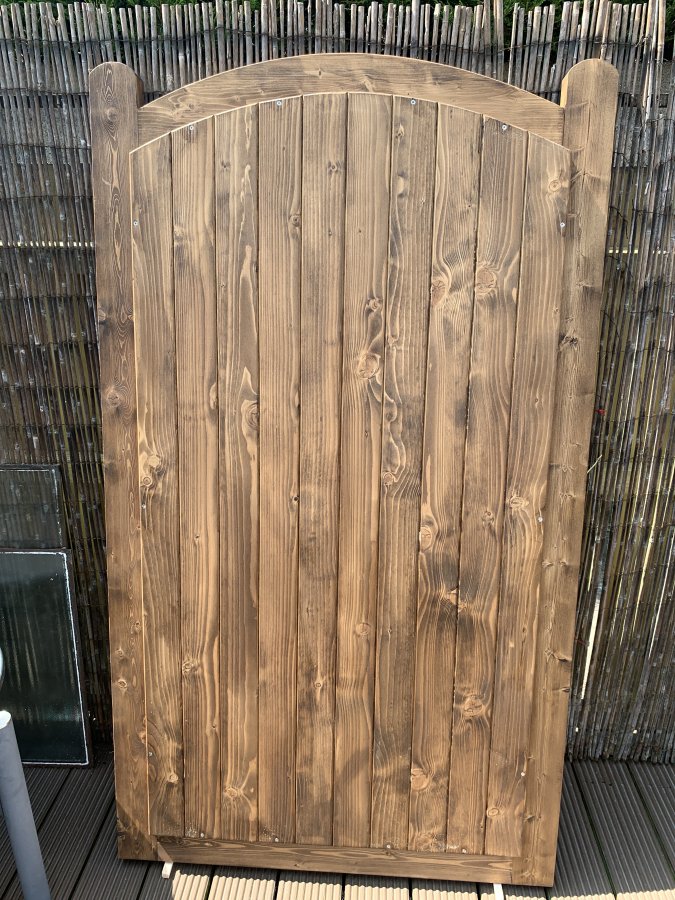 I suggest stop buying more doo dah's for it, and focus your attention on
making something which will get you by.

That could be a nice kitchen island, which might serve two jobs in a flat,
or could be something like this which might make a rather nice coffee table, as ye can't work on that contraption, nor a workmate, if you have some hair you wish not to pull out in anger. 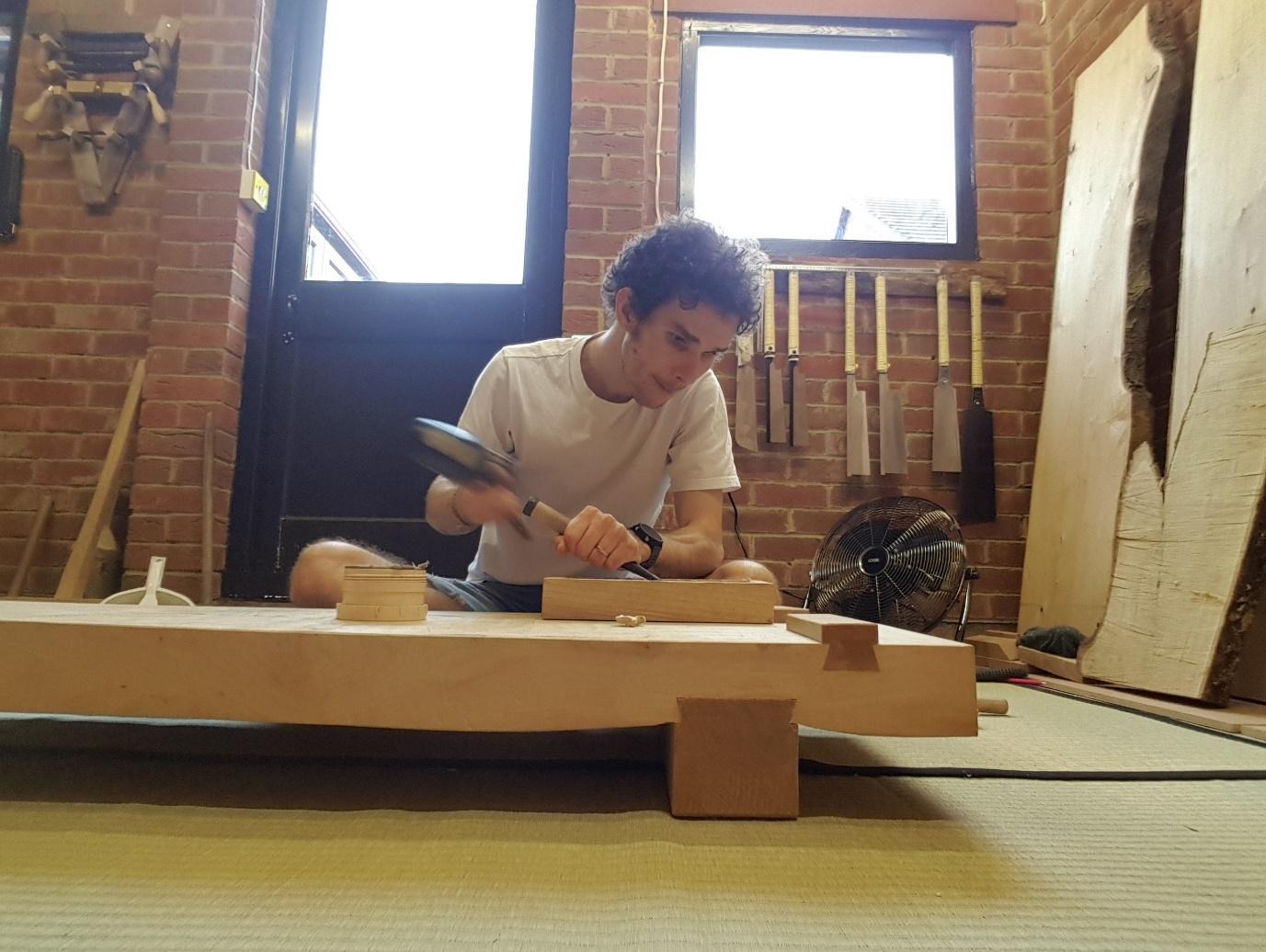 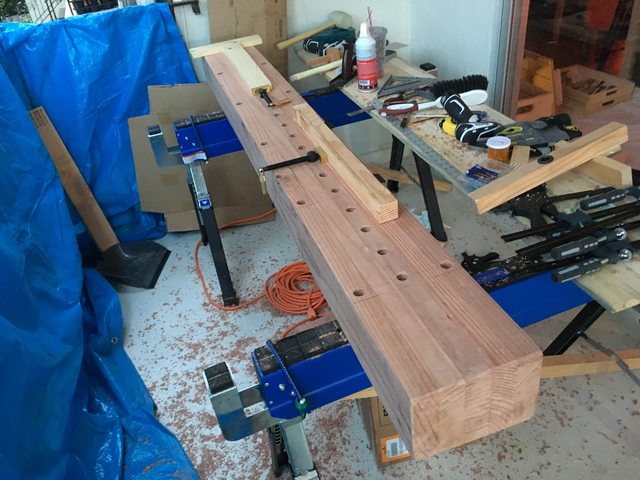 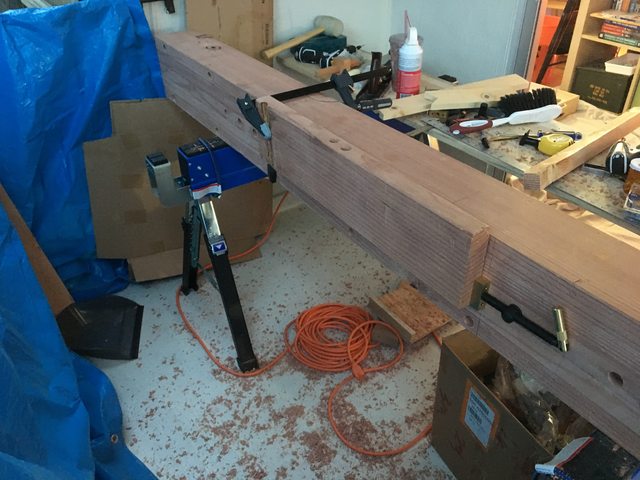 You might get the impression of a theme going on here with these super basic benches, the length is irrelevant.
They have only what you need, and nothing more.

After some thought I returned the Keter. It has its uses but doesn't fit in with what I'm trying to do. The £250+vat cnc quote reinforced this was the right decision.

I'm still thinking what to do next, I really like the idea of Superjaws but also saw some basic but functional tables like this which I could knock up relatively easily. Only question is how stable it would be with bench dogs and/or vice

If you're intending to make furniture.
You need a slab of some sort. not a bouncy unflattenable
subwoofer if living in an apartment.
Have you looked at any old school benches?
You could reclaim the wood to make what you want, provided its not in tatters.
Maybe some laminated counter/work top material provided its not oiled might be another option.
Otherwise you likely need to laminate timbers which isn't easy without a bench in the first place, depending on the timber you have access to.

Someone here would likely give you a hand to make up a bench top,
as it sounds like you need something narrow, so wouldn't take too long.

Good call on the return IMO

Possibly slightly off topic, but I remember seeing someone with folding tubular metal sawhorses, which looked like 4 or 5mm gauge, was it Pete Maddex?
Those were about the only thing I would even think of buying, should some wooden sawhorses be too clunky.

I made one of those Moravian benches to use at college. I think it cost about £120 to make out of 2" southern yellow pine (that was in the good old days though).

I think it's a great thing and dismantles to stack against a wall when not in use. 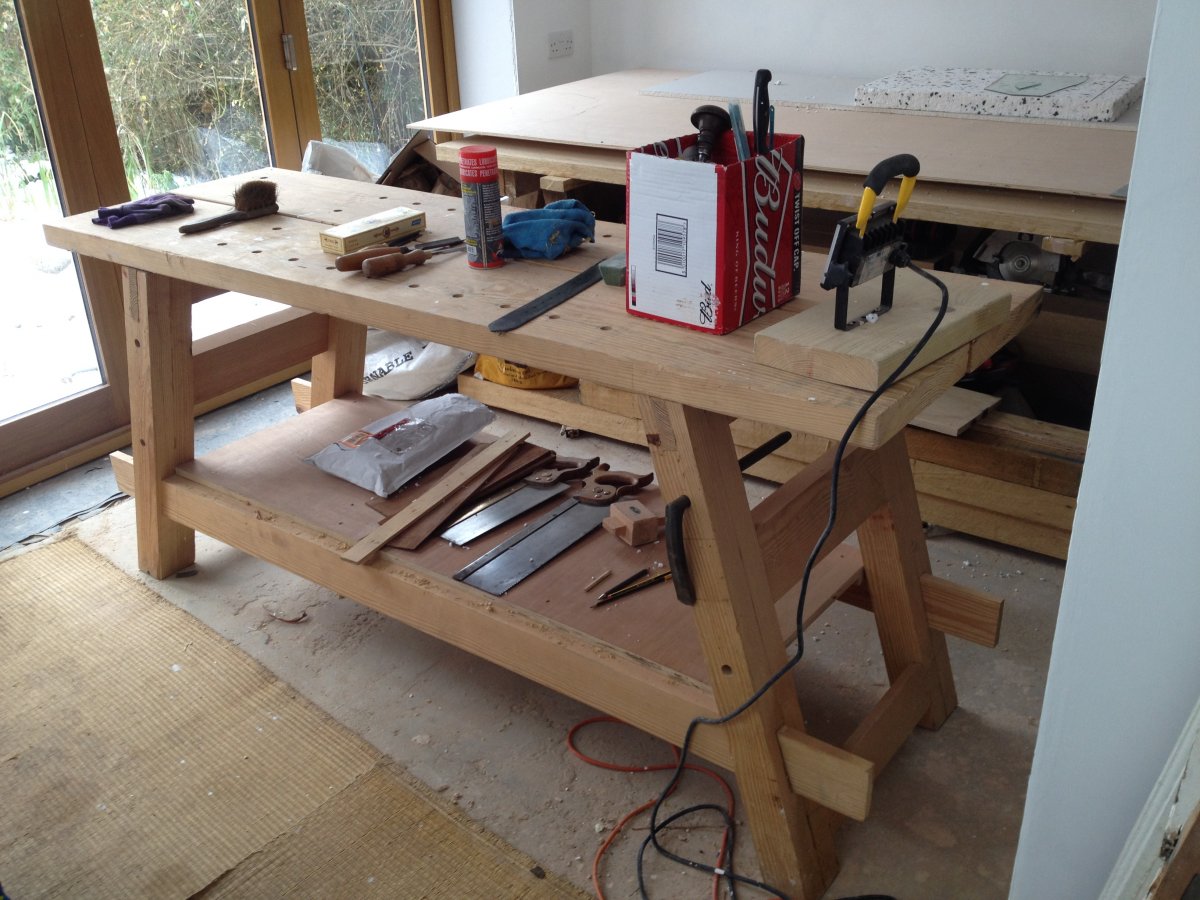 What about an original workmate, the old, strong & heavy ones. Yeah it’s not going to be perfect for hand tools but if you want something for £50 that you can just get using it could be a good option. When you outgrow it and want a propper bench then you can easily move it on for the price you paid.

Weight is one thing, racking is another. Push your workmate up against the wall and it won’t rack in one direction. Put you workpiece on the floor and it won’t bounce so much. These are all workarounds you can use to make a bench
W

It's certainly been a learning experience and with hindsight I should not have rushed into buying a Keter workbench. I've always been a hand-on person, making few things here and there as and when needed. This was always rough work but it did the job and I guess I got too excited at the thought of finally making stuff properly I'm going to take a step back and work through my options now I have a better idea of what works and doesn't work for woodworking.

Might be an idea to put in you location, you could be very close to someone who could help.
You could do a lot, as in get everything else done by yourself, if you had a few planks laminated up.

Do you have a coffee table in this apartment?
And would it be an option to have a bench slot down on top of it?
Should it be nice enough to even stay there "for the night",
it's not compulsory to saw into it like some do.

I forgot to mention should you find a bench with a vice
the Record no.52 lends itself to a narrow bench compared to the much larger 52 1/2, (should have mentioned that previously)
Not saying you need a vice at all though, and TBH it wouldn't fit into the theme of a coffee table.
A moxon might?, although just another thing in which a few good f clamps can do,
Yes some folk have their Roubo's in their houses.
I couldn't find that picture with the entertainment centre so this will have to do, the petite Roubo, I'm not sure if Schwarz made this one.

Just merely a suggestion that it could be a nice thing, that won't get damaged, and you use a sheet of ply/MDF or bearers for the job of doing anything dangerous.
Likely you might get more of an idea of this kind of woodworking if you seek out folks with nice benches like Rob Cosman,Frank Klausz,David Charlesworth,Mike Pekovich etc
Basically anyone who has taken the time to build a Scandinavian/Continental or Roubo workbench,or something of that style, will have ways around hacking into their bench.

1000 × 1500
Look at this for instance, for some viceless work holding from Mike Simesen .
Or Even Simon James

You might also find some articles on mini workbenches or "bench on a bench" Steve Latta made one for instance, although more for inlay and fine work, there's a good few of these which give some inspiration.

I expect some would be far more familiar with some Japanese publication on workholding than I can recall seeing.
That's going to be the ultimate in compactness, should you choose to have a look, Toshio Odate might be a start.

Just some more ideas, should you wish to jump in the deep end.
Good luck
Tom
Last edited: 22 Jul 2021
C

TheTiddles said:
Weight is one thing, racking is another. Push your workmate up against the wall ....
Click to expand...

Circa 30 years ago, Black & Decker used to sell a "Wall Mate", basically a workmate without the rear legs! It had the normal 2 tops to hold work, but also had a third top that could fit in between if required. I bought one due to lack of shed space, fixed the rear frame to the shed wall, and then the front legs could 'cantilever' up and be held against the wall by a simple metal catch.
Worked very well....wonder why they didn't continue making them?
You must log in or register to reply here.
Share:
Facebook Twitter Reddit Pinterest Tumblr WhatsApp Email Link