Just my opinion, but I think you'll find the situation unrewarding even with practice. But I may be out of touch as I've got a gaggle of rip saws (perhaps 5) that are set up for hardwoods and softwoods with tooth count, rake and set. The issue with japanese saws is that instead of modifying your own (with most), you buy a configuration - you have no recourse them for making it work.

I think what I didn't get very clear above (not for your benefit, but others) is the flexibility of the plates on the japanese saws means that when you correct for a direction in one plane, the flexibility makes for a consequence in another that you're not anticipating.

When I first switched over to hand work, I'd often get off course on a long rip and usually not twice, so the remedy was to flip the board before things got bad and come back the other way. But as you, I never put the time in with the japanese saws to do the critical thing that we all naturally do with western saws on a long rip - make constant and small corrections - because we learn the sense to know when we need to do that. The stiffness of the western plates makes it so that there aren't too many unintended consequences.

A saw that requires lots of wander is a dud in the context of hand working, too - even for people who don't do much hand woodworking. Often, strange shaped or sized pieces allow for extra parts if you can hit a small variance.

In the case of the above (which is a typical actual use), I want a neck and a fingerboard out of a blank. The blank is as thick as it could be after I planed out bow - there is 1/16th of an inch of wiggle room more or less. With a good bandsaw and care, that's easy to hit (that's a 16th in excess of the kerf - fortunately).

Thanks Danny. I saw.
D

Just making some 'covid19 lock-down' cupboards cut into the plasterboard/drywall of the attic bedroom - fairly rough plywood job, but trimming with some oak offcut mouldings (about 35mm x 15mm) doing the mitres for this and tried thin blade fine tooth Japanese saw, thin blade fine cut Zona (both these nearly new replaceable blade about 18-24 tpi) and an old English in-line gents saw about 16 tpi but thicker blade.
They all cut OK but the Japanese tooth shape seemed too aggressive for oak and I had to be incredibly gentle with it; the Zona was fine, much finer cut than the Japanese (less set?), and the gents saw didn't seem to have the 'bite' of the other two (maybe my amateur saw filing) but actually gave a better result, just as quickly and was easier to handle. This result surprised me.
Possibly quite different result with cedar or pine?
D

dannyr":196jrg9n said:
Possibly quite different result with cedar or pine?
Click to expand...

pretty much. A high hook tooth (japanese) in gluey hardwood ply or some hardwoods will set itself like old metal golf spikes.

Well I'm a bit of a stick in the mud, I've got many brass back saws and many rip and cross cut hand saws, most are 100 plus years old, the newest from the 1930's. thay are all set up to do various jobs superbly. I dont poo poo people who like the Japanese type saw. I just dont feel the need to try one......
T

A few years ago Mike Huntley (ex editor of F&C) arranged for Nagatsu-san to give a workshop for the then members of the Japanese Tool Group Society. He wasn't a saw manufacturer but a 'tuner'; simply by tapping the saw blade on his anvil to 'tune' it he could turn an ordinary Japanese saw into something extraordinary. I know because I tried a 'before' and 'after' ordinary commercial saw: 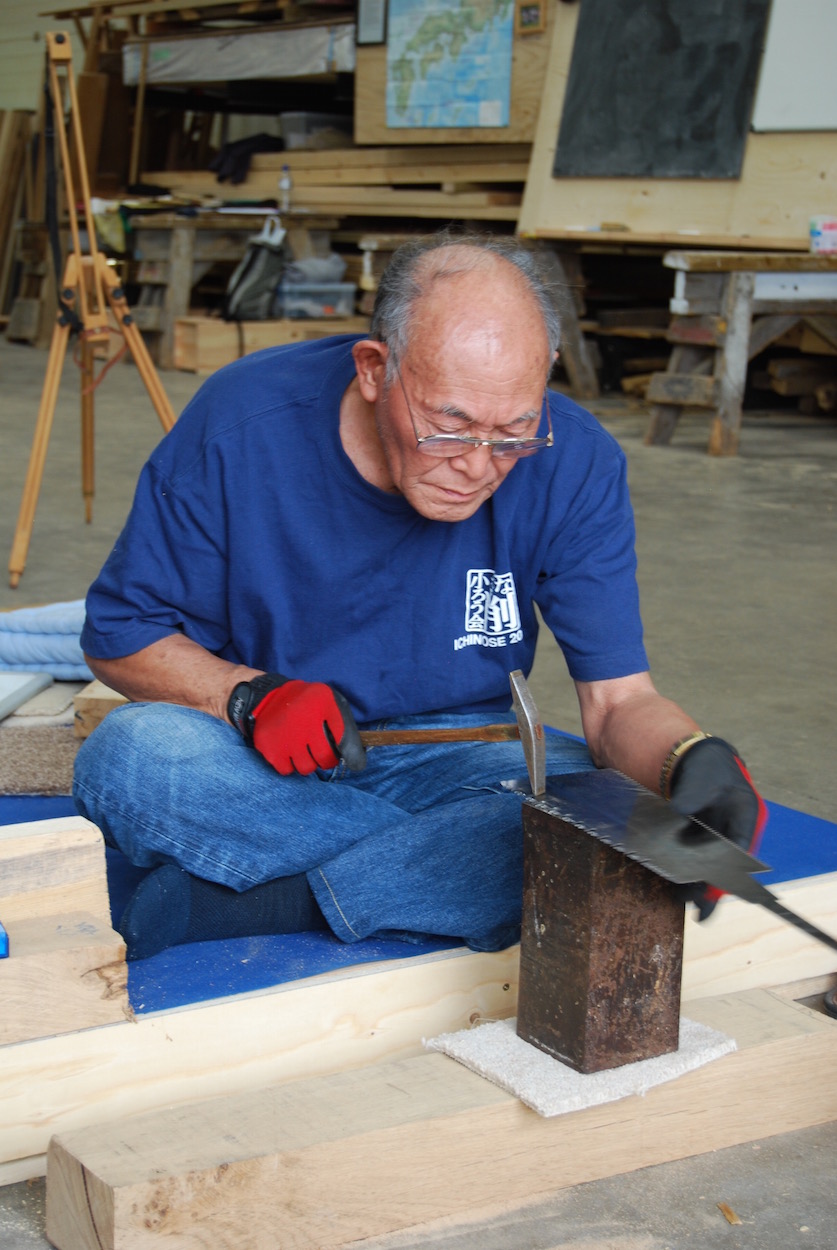 The saws he developed used a huge gullet to clear the sawdust: 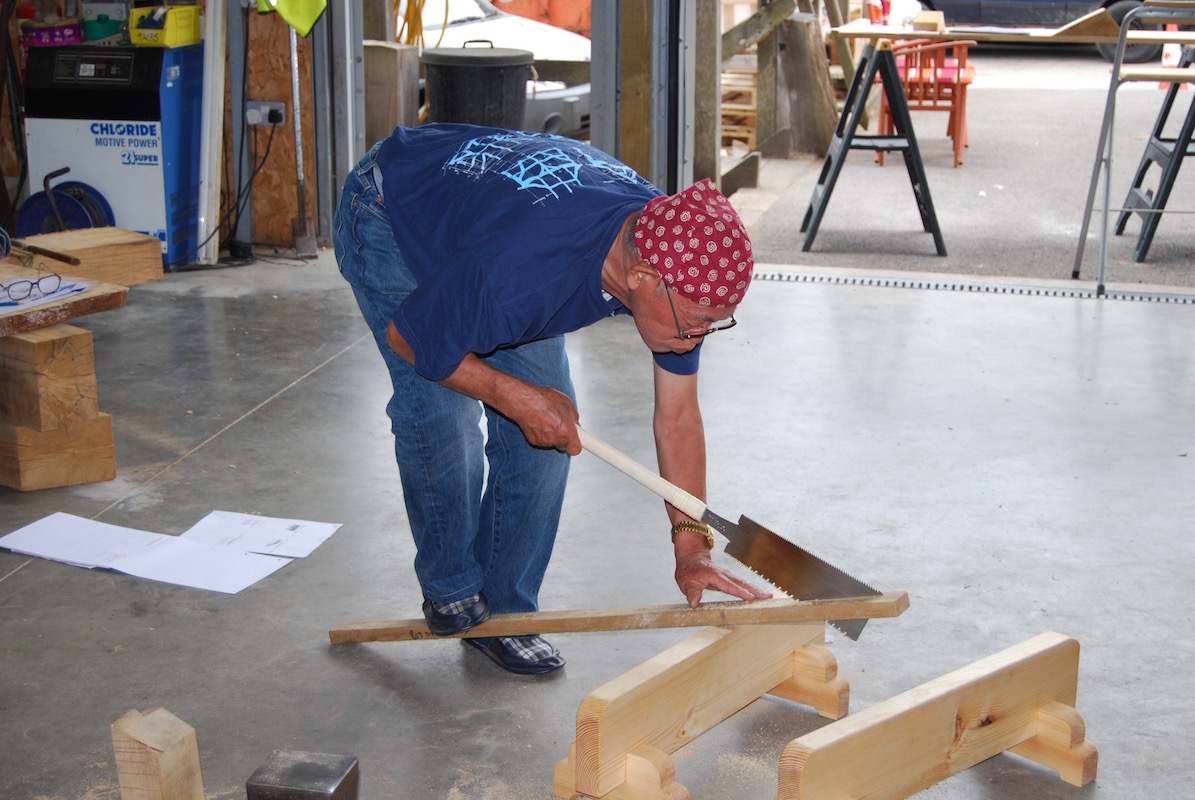 Although they look incredibly fierce, these saws cut beautifully with hardly any effort - Rob

I wonder if Japanese woodworkers have the same debate :?:
W

That would work":1rlhcp62 said:
I wonder if Japanese woodworkers have the same debate :?:
Click to expand...

LOL. this thread has reminded me of a visit to the Hawley collection at Kelham Isle Museum in Sheffield. An arrogant curator, saw me looking at two identical saws. He haughtily asked me 'do you know the difference between them? That was his big mistake...I let him go 20 minutes later! As a medieval re-enactors specializing in the crafts of the period. I know most of the history and development in England of pull and push saws. All I could hear from him was 'Oh I didn't know that'. 'I didn't know that'. It was fun really.
D

That would work":3qno2ayk said:
I wonder if Japanese woodworkers have the same debate :?:
Click to expand...

I don't think they have much exposure (not speaking of yaitiki and the other guys who make it to the west to make a few bucks giving classes, but the folks working in japan).

I say that because western razors (straight razors) are all over the auction sites in japan (to the point that kamisori are kind of a novelty there among the folks who use razors - as a resident there once put it to me, "kamisori aren't easy to find on the ground, they're mostly sold to foreigners".

But western planes and saws are sparse to say the least on their sites.

There's a professional woodworker here in the states who uses a lot of japanese tools, and early on, he was using a LN jointer (his business is grown and he doesn't work as much by hand at this point from what I understand), so I offered to make and send him a couple of wooden planes at cost. Someone in japan sent over a TV crew to see the "american working with japanese tools". I would suppose there's a new segment somewhere in japan for anyone who could actually search in japanese. He said they were completely enamored with the wooden try plane because it's so much bigger than any of the japanese plane profiles (but still wood), and figured if the footage wasn't overedited, it probably made it to japanese TV somewhere.

A link to japanese auctions - handsaw category. I flipped through 12 pages and found one listing of sandvik hacksaws. That was about as close as I saw without going through more.

Showing that buyee section wasn't helpful for shrinking my pile - I saw and bought a very nice maebiki for about $25 (figure shipping will be another $30 surface mail).

Your link is out David. It's a workbench pic.
D

The link is one of the only places I can see (without going backwards into brian's blogs) the planes that I sent him. Hopefully, two planes appear on top of a chair bottom.

As brian got more popular (quickly), he had to buy quality milling machinery to keep up with orders. (I think he did work professionally for a year or two entirely with hand tools, though. He lives in a nice suburb of New York where you can get commissions for "real woodworking" whereas most of the united states wouldn't have such taste or means).

Ah. I see. You mentioned a link to Japanese tool site.
D

Ahh, thanks for pointing that out. Here's a proxy service (so that auctions can be seen in english) to japan yahoo, saw category. Same thing as ebay in the western world, they just use yahoo's auction service instead for some reason.

I think it was this thread where I mentioned buying another maebiki - if not, this is the one I just landed. $21. proxy fees and shipping will make it $60 to get here to the states, but compared to the schemers selling them on ebay for $200 (often in bad shape), not bad. Curious as to how one of these will work as a resaw for western hardwoods if the teeth are relaxed a little. I have a bigger one sharpened and set for logs, but I'm lacking the green logs to try it on.

(But....little in western saws there)

Yesterday I needed to crosscut the two ends of a board which was about 10" wide and 2 1/2" thick so out came the Sudoku (or whatever the double edged thing is called) and I forced myself to very consciously follow Woodbloke's advice about holding the saw with a particularly light touch.

This resulted in a significant improvement: my routine drift to the right as I sawed down was minimised. One end will need minimal shooting and the other will only require a little finishing work.

So my thanks to Woodbloke.
W

Andy Kev.":11x8xx3d said:
Yesterday I needed to crosscut the two ends of a board which was about 10" wide and 2 1/2" thick so out came the Sudoku (or whatever the double edged thing is called) and I forced myself to very consciously follow Woodbloke's advice about holding the saw with a particularly light touch.

This resulted in a significant improvement: my routine drift to the right as I sawed down was minimised. One end will need minimal shooting and the other will only require a little finishing work.

That is particularly good to hear! Practice, as with most other things is essential and it's great to hear that you're getting to grips with the right techniques to use these saws. As I said earlier (I think) once you've mastered them you'll wonder why you ever used a Western saw - Rob
A

I can see me coming to regard them as complementary to Western saws but I can't imagine ditching the latter in favour of the Japanese ones. Perhaps I'll come to prefer them for certain tasks e.g. cross-cutting biggish pieces of wood accurately to length.
You must log in or register to reply here.

D
Making chisels out of files
2