If you're working on something mostly hand tools....updated

Though there is a portable thickness planer in the background it didn't get much use on this project.

Note, this is utility furniture, and it's intended from the outside to look less than brand new (e.g., I don't want it to look like a plain square box sprayed with conversion varnish or toned lacquer), but there is no intention for it to look like fine furniture - it's a box to hold the kids games and toys upstairs in a corner between the fireplace and the front wall of the house).

The doors are haunched M&T, flat panel (solid wood panel, resawn by hand). The mouldings are hand cut, and so is the T&G back (the back on the top cabinet will be instilled once it's in situ upstairs (or just before).

The top and bottom are still separate and will be screwed together. There is no plywood used in the cabinet, and no screw or dowel joinery. Just dovetails, M&T, dovetailed shelves top, and housed dado on bottom.

Modern hinges as I know if they are broken, getting replacements will be easy, and they are soft close (this is a house of doors slammers). If it was intended to be "nice", I'd have built a frame, but the mrs. was adamant that she wanted no center frame and maximum doors pace, so the doors sit right on the front of the case. kind of tasteless, but not as overt looking as I thought it would be.

The mrs is in charge the pulls. I am not a fan of building furniture and am glad to be done.

(the one aesthetic minus that I see so far (there is a knot hole to fix on the front of the bottom cabinet moulding, but I'll do that later- at any rate, the one aesthetic minus is that the quirked bead moulding on the bottom of the top case is out of place. I thought it would go with the doors - there is enough there to cut the bead off into a cove and I may do that at a later date so that it doesn't look quite so odd). 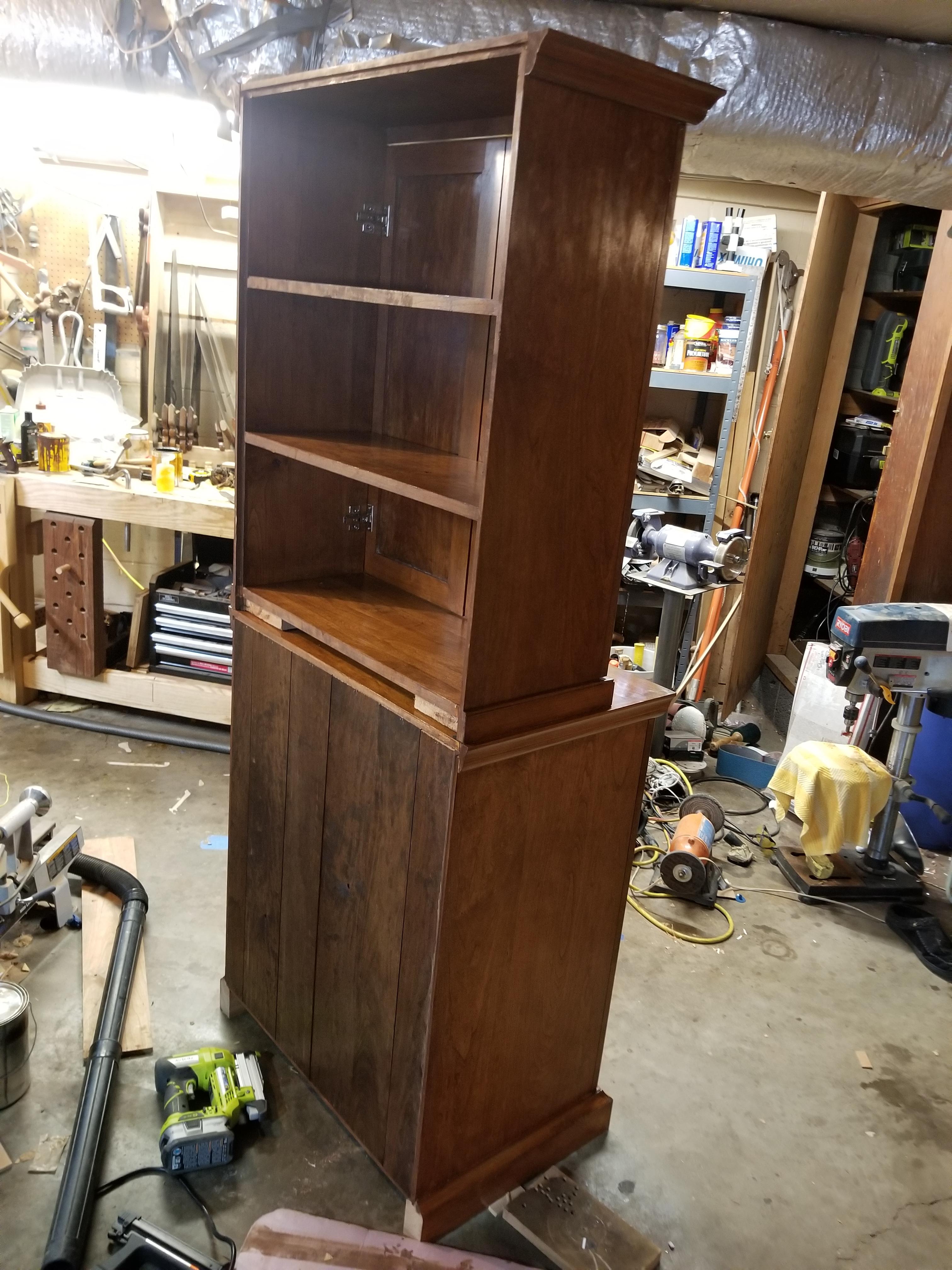 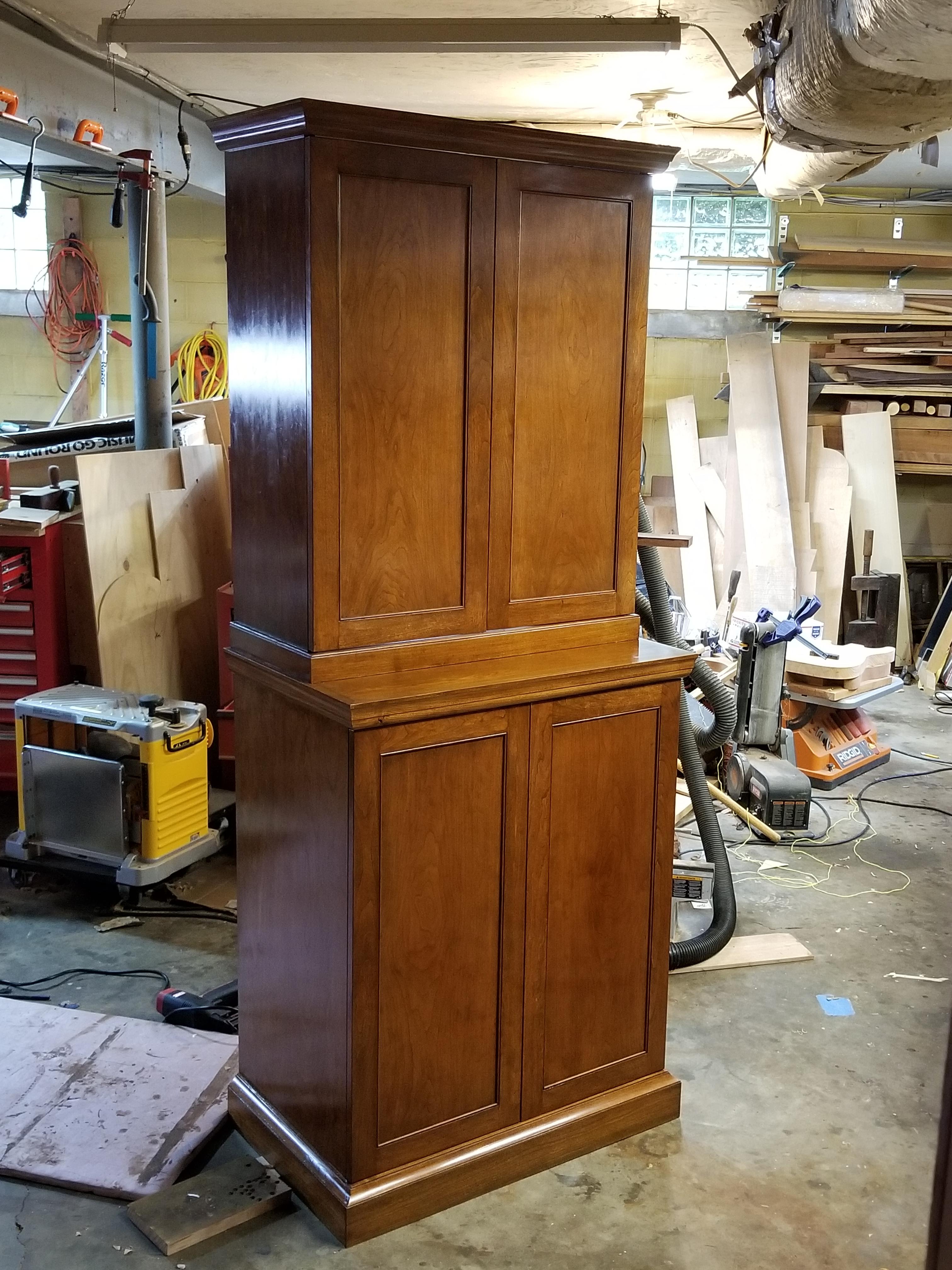 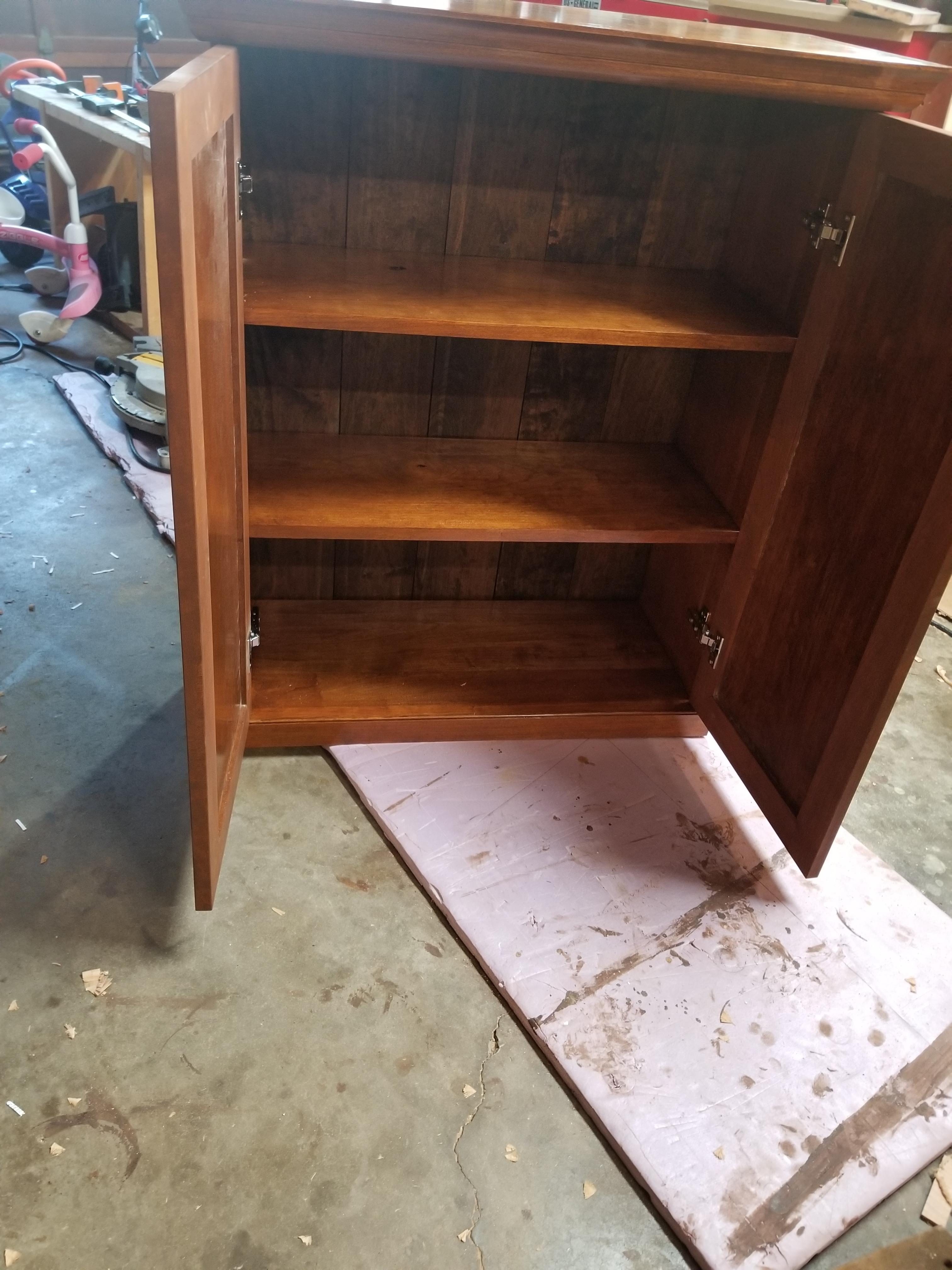 Where's the rest of the thread gone?

Anyway, apart from a mixer for the mortar, this brick and flint wall is all hand tools.. . Each flint panel takes one and a half days........there are 6 panels. Working around your ankles for 9 days isn't easy. The bricks are all reclaimed from a demolished chimney and the old house plinth. 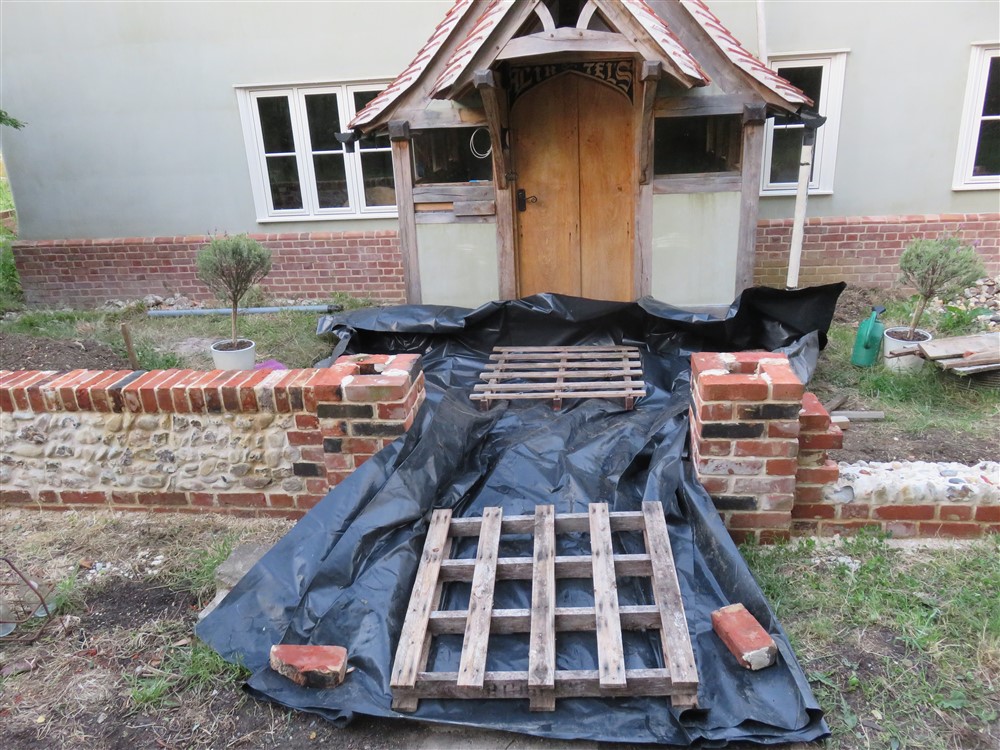 I used a hand wire brush for all of a minute before swapping to using the grinder with a twisted wire wheel, does that count? :lol:
D

The original thread is some pages back. It had veered off topic, so I created a new thread.
D

and did you have to knap the flints?


(how about collecting/accumulating too many tools AND using them?)
D

final in-situ (at least before knobs installed, but those will just be purchased - and I will make a matching small cove trim piece to wrap around the bottom of the top case and hide some of the bottom height. 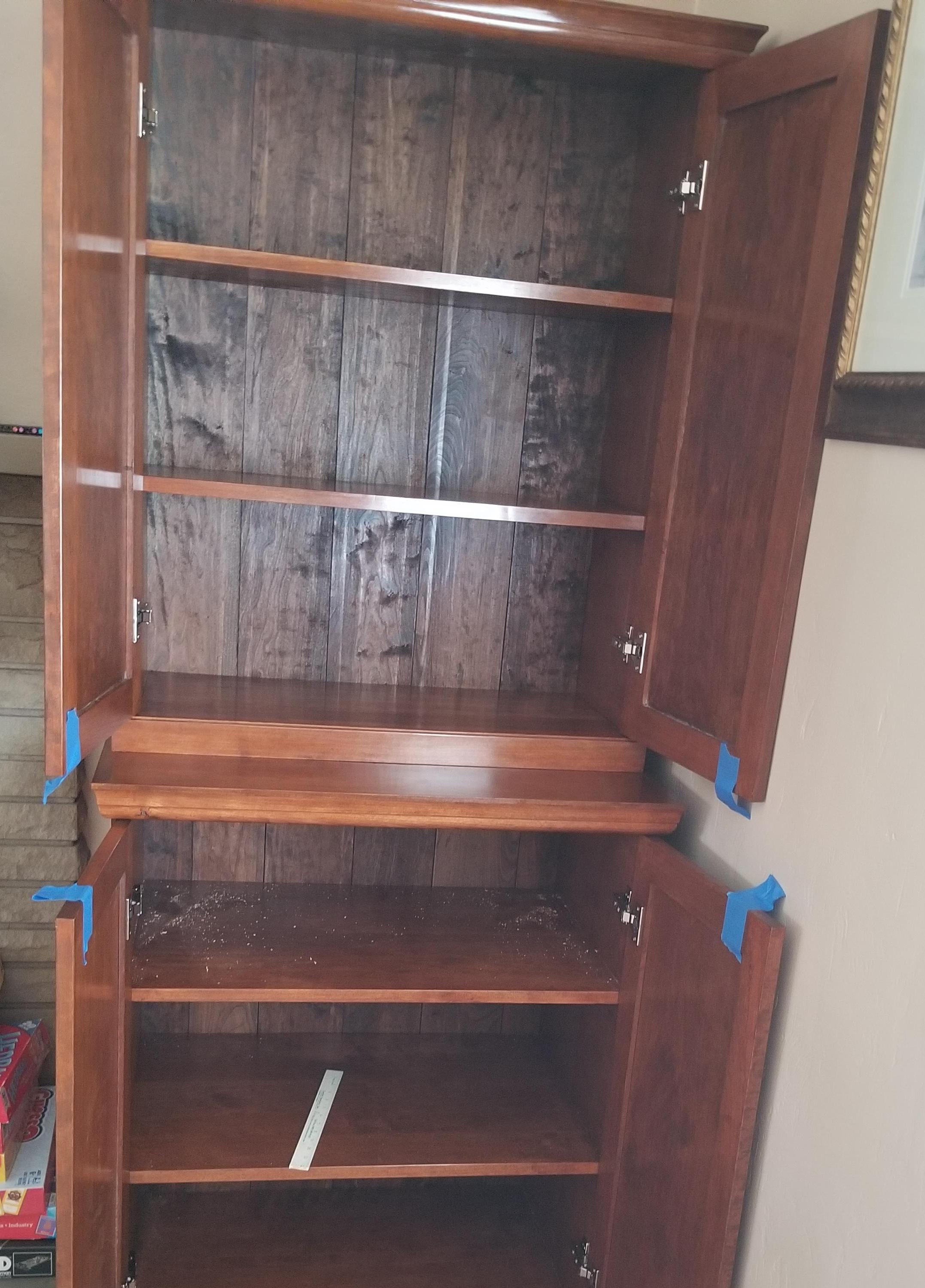 This whole thing would've been better posted in the projects forum, I suppose, but I've already gotten a lot of input about how little sense it makes to make a project like this by hand, to use japan colors to do the coloring (instead of spraying a toned coat or just using regular stain or dye), or to apply the finish by semi-french polish method instead of spraying.

It's not always about doing it the fastest way possible. I'm quite sure it would look different if it wasn't done by hand. Perhaps more modern or whatever else.

I'm going to be honest with you DW and say that although I like the process, and much of the simple look of this piece, planting doors on the face using kitchen cabinet hinges and without a surrounding frame completely spoils it for me. With a very minor change or two this could have been a lovely project.
D

MikeG.":135arpv7 said:
I'm going to be honest with you DW and say that although I like the process, and much of the simple look of this piece, planting doors on the face using kitchen cabinet hinges and without a surrounding frame completely spoils it for me. With a very minor change or two this could have been a lovely project.
Click to expand...

I agree. I wanted a frame with a center post and two inset doors on each half, with the bead. The cabinet that was in place here was put together this way and fully open like this one when both doors open and nothing obstructing anything - thus, the mrs wanted no frame and overlay doors. I obliged. next to it is a cement fireplace, and the house is full of door slammers, so I chose modern hinges for two reasons:
1) because of the mrs. - my mrs doesn't really appreciate the fact that I'm woodworking and resents a little bit that I won't make a project like this go away as quickly as a visit to some place that will make custom things.
2) the doors can't be slammed shut and can't physically be opened far enough on the left side to hit the hearth.

I originally intended to make the cabinet more haphazardly and before I dug in thought it might get a very simple finish. The standard of the rest of the cabinet outgrew the doors and the hinges.

Or, in short, meeting those bits and pieces (the demand of the doors and hinges that won't allow for slamming, don't need a center post, and can be easily replaced in the future due to how common they are) was more important than the look. I entertained myself making the rest nicer.

When you don't go all out on a project like this (I could probably have stood my ground and made flush doors in a face frame), then it's ripe for scorn on the internet from folks who don't feel they're pleased with it. That's OK.

I see it more as, i'm done with it now and it's off of my radar and I can take the bits learned from it and use them on an "all out" piece.

It does give me great satisfaction to bury all of the joinery on this piece into the invisible, and I've got several things figured out that I can use elsewhere:
* how to sharpen a beading plane so that it will plane against grain on less than perfect wood and not tear out
* how to make a light fast stain that won't blotch much and doesn't rely on some specific surface finish
* and now, I've got a dovetail plane to make the male side of dovetail shelves