How do you hold your hammer?

I was just about to post that I think that both illustrations are wrong. Musicman has it right. An extended forefinger gives you control in a way that that illustrated grip does not.
O

Cant day I’d ever use a hammer with an extended forefinger. I think that’d just feel weird!

A saw? Definately. Files and chisels? Sometimes. Never a hammer tho. Maybe i’ll try it and see. but if I belt my thumb it’s your fault!
J

Agreed about extended forefinger for more control when driving thin pins and tacks that bend easily. 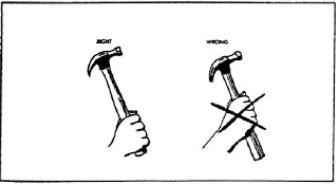 Steve's point about the forefinger is correct, in my opinion, but only for holding the hammer a third to a half way up the shaft.
That technique is for tappy-tap-tap-tappy type of work.
Try using the forefinger approach when framing and be prepared for some pain.

I was thinking, (or maybe that should be over-thinking) this earlier, weilding a hammer for framing purposes seems somehow akin to using a slingshot.

A slingshot you begin the arc with a couple of swings before going into full rotation, all the while building momentum, then the final arc is when the elbow (I think) gives it that final devastating 'snap'

Same with the framing hammer, there's an arc that starts at some point above and slightly behind the head, it bears down til the arc is half way between points, then it's the elbow that kicks in to deliver that last 'punch' that drives the nail home.

Steve Maskery said:
I was just about to post that I think that both illustrations are wrong. Musicman has it right. An extended forefinger gives you control in a way that that illustrated grip does not.
Click to expand...

Exactly, Steve. Almost always (well OK not with a sledgehammer). Files, saws etc also. All about control. And we will not be intimidated by the yokels with blunt instruments !

I saw an American on YouTube proclaiming that you should always hold the hammer near the head - the long handle is just to give you something to balance out when you clip it to your belt.

Being a) YouTube and b) American, I didn't think too much of it, but having looked at the chap with the framing hammer, it seems to have a longer handle than your average claw hammer

When I joined the R.A.F. as a Boy Entrant at the age of 16 the metal work instructor, a HUGE flight seageant, saw me holding a 2lb hammer 1/2 way up the handle. He wandered over and said "sonny, if Dog had wanted you to 'old that 'ammer there 'e would 'ave made the 'andle that long. HOLD THE THING AT THE END!

I did and have done so ever since

Something else I was taught was 'never force it, use a bigger hammer'. That works for me too
R

Ollie78 said:
I find if I am actually bashing in nails I hold it at the end but if I am using it to hit a chisel I move up to the middle for more control.
Now I realise I am being extremely controversial by hitting my chisels with a hammer but I find a wooden mallet cumbersome and not heavy enough, I do have hoops on my chisel handles though. I prefer to let the weight do the effort than have to add force by swinging at it.
Click to expand...

I use a plastic faced hammer for chiselling. Has a bit more heft than a mallet.
O

MusicMan said:
Exactly, Steve. Almost always (well OK not with a sledgehammer). Files, saws etc also. All about control. And we will not be intimidated by the yokels with blunt instruments !
Click to expand...

Gisson on me luvver, youse all gone forein you ave. Grockels an' emmets 'as their odd ways but down ere we doose a proper job
C

Further to Frank Horton's note about 14lb sledge hammers, I once had the job of separating the crossheads from the piston rods of an inside-cylindered 0-6-0 saddle tank locomotive, the piston rod end having a slow taper which fits very tightly into matching taper of the crosshead, so they don't come off easily. This is done by removing the connecting rods, inserting a scrap bronze half-bush against the gudgeon pin and a bronze button against the piston rod end, and then a long, slow-tapered wedge between the bush and button, and whacking the wedge end hard with the sledge. Because the loco's boiler prevents attack from above, this has to be done from under the engine in an inspection pit, swinging the hammer behind you, then forwards and upwards with force to strike on the wedge end. Possibly the most physically demanding piece of hammer work I've ever done. It worked, though.

The only person I've ever seen using the extended-forefinger grip was a toolmaker, and he was just using a pin hammer to make tiny tap-tap adjustments whilst setting a job on a machine tool table.

I've seen an extended thumb (thumb along shaft pointing towards head), which I gather some call a Smith's grip. Tried it. Doesn't work for me. The one that works for me is the ordinary fist grip, near end of handle, and don't forget the wrist flick just before impact for extra hammer head speed.

And yeah - if it isn't yielding to persuasion, don't force it. Get a bigger hammer!

Talking of physically demanding hammer work, I'll just slip another video link in here. If you don't watch all of it (which you should) skip to 3:35 to see the strength and coordination needed for two men to work together on the same forging.


And also this, from Netherton in the Black Country where they made chains and anchors for big ships. Impatient viewers should start at about 4.50 for the best hand hammering display. Watch out for the big sledges with two handles on and admire the way they all manage to hit the iron, not each other. Makes me tired just watching.

2 men isn't anything, I stood and watch a team of 6 smiths (and 1 apprentice with a set of tongues) work an anvil (one of the smiths was my dad). can't remember what they were making but it needed big hits fast to shape it and keep from having to stick it back in the fire.

in your video it's only 1 who's working the steel and he's the apprentice, the smith is scaling and dressing.
I like this one for 2 man team work. somewhere around 4.50 you'll see them both go to town on it.

Novocaine, I think we agree - I was adding that video at the same time as you were posting it!

Everyone else: have a look now, you won't regret it!
J

Just a quick tip for anyone interested.
If you want to add a YouTube link to play from a specified time, IE 4m 50s in novocaines link, pause the vid at the correct time, right click anywhere in the pic, and click on "copy video URL at current time"

I know, but that doesn't work on a phone with the YT app!
M

I concede that for forgework the index finger is better off holding the hammer! I confine my technique to hammers in woodworking and small-scale metalworking.

Reminds me of when I was teaching a bunch of university metallurgy students about structures of metals, trying to get him to understand how the slag particles in wrought iron were elongated in one direction. "How is wrought iron made", I asked? This rather weedy youth looked up from his microscope and said "By great big sweaty men" !

Hardly the same level of skill as above, but there are 4 of them:

I was looking for something from Alec Steele as I've seen him a few other smiths do it a few times on the tube. best I could find

Never head it call a striking team before, make sense now they say it though.

Hm. The hammer I use most is a carving mallet and the handle is one hand-width long, so there's either "holding it" or there's "you've dropped it again" or occasionally "well, that's sounded expensive".
You must log in or register to reply here.
Share:
Facebook Twitter Reddit Pinterest Tumblr WhatsApp Email Link