Thought this may be of some interest - it's a fine object indeed. Jim found one a while ago but it was missing some of the tools, then this one turned up complete. Makers were Joshua Britton & Son, Stoughton, Mass., and this is the Horace E Britton version (around 1890s I think).
The range of tools is mainly awls of varying forms, but also one miniature 'nail-puller' shown fitted, and something resembling a miniature chisel. Not sure what this tool as a whole was used for - I was wondering saddlery / leatherworking, or maybe sail-making. Any ideas? 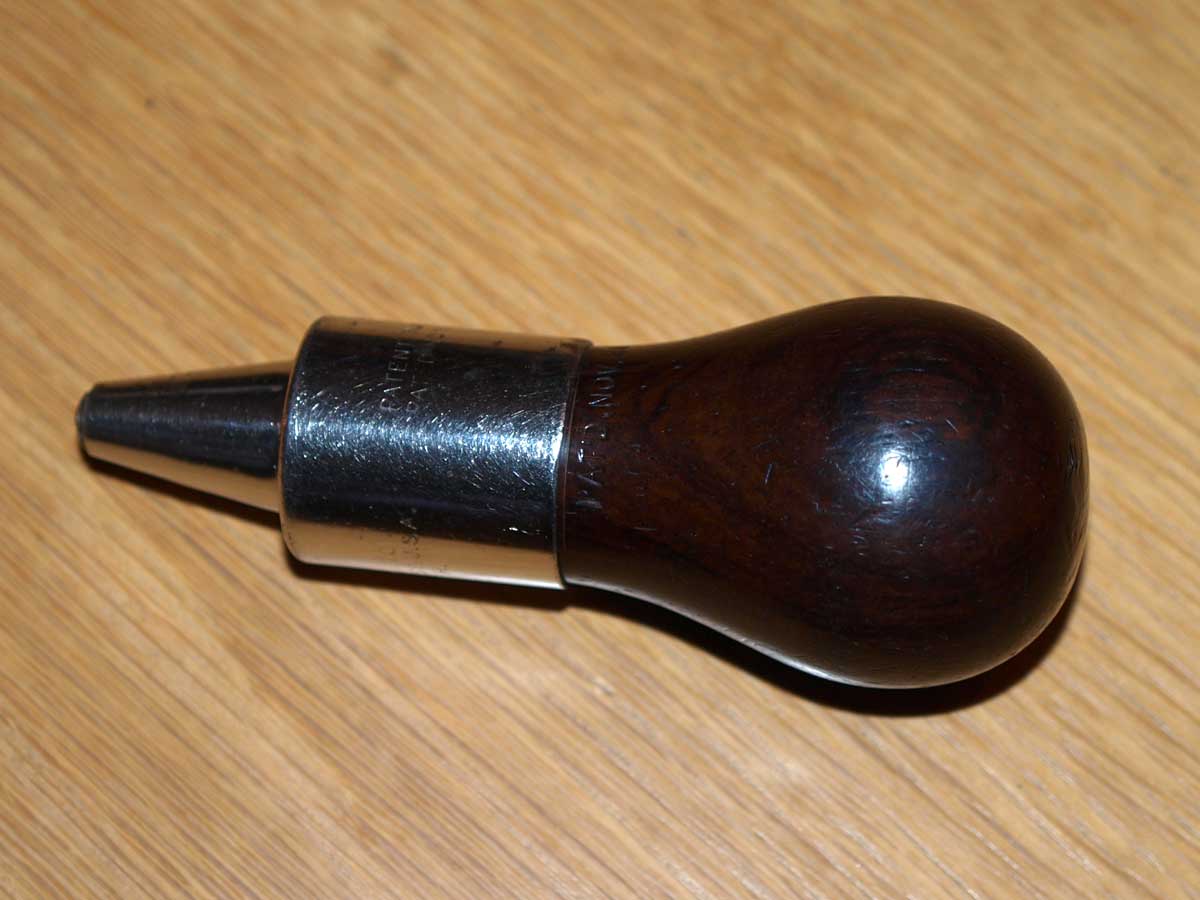 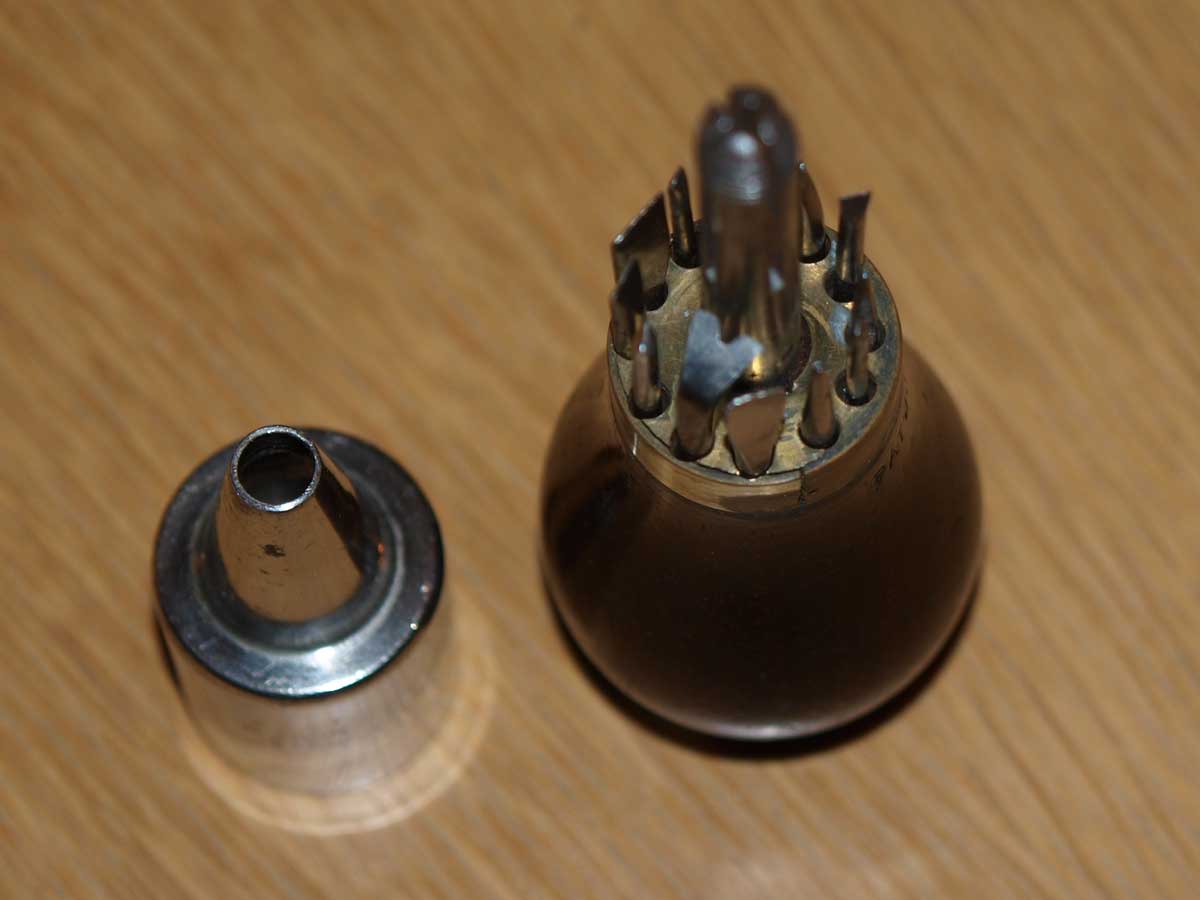 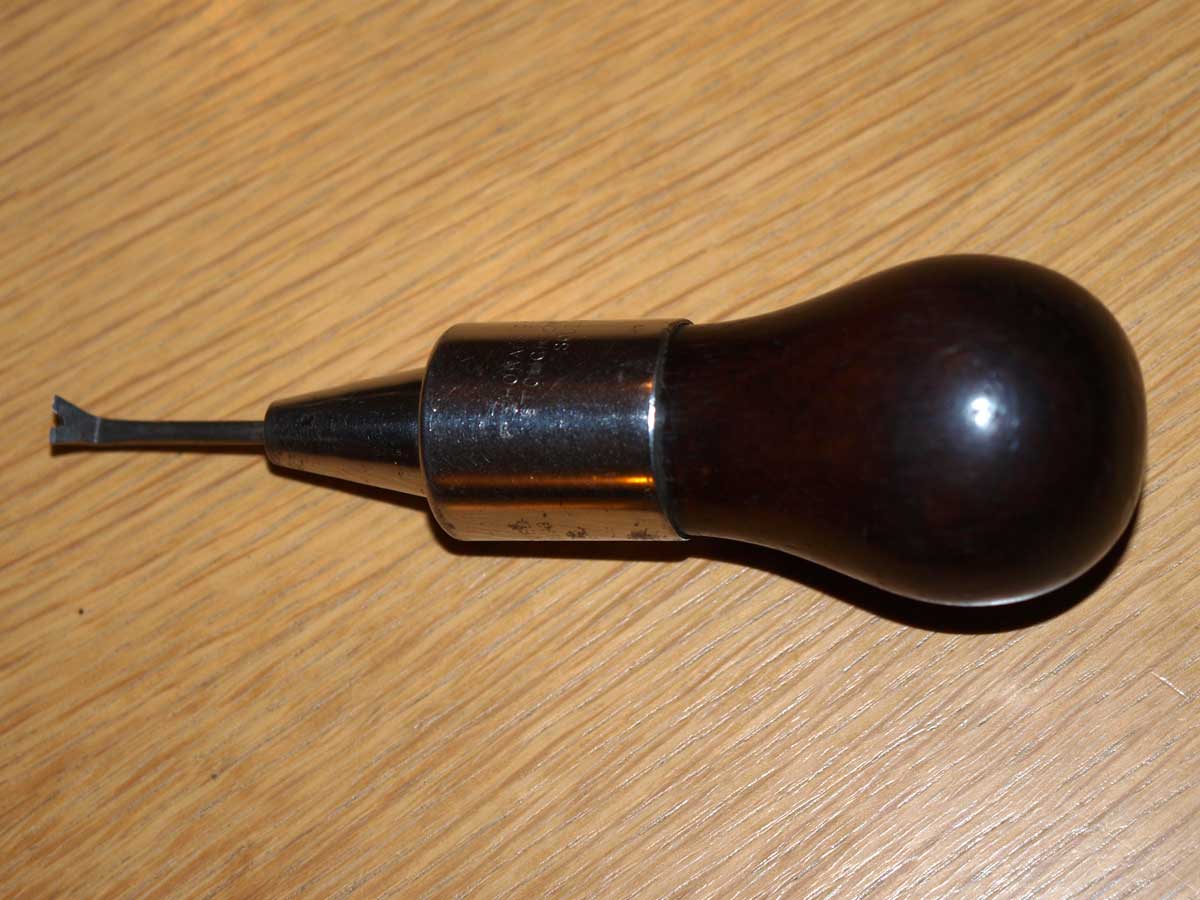 ....although mine is deficient of a few of the tools...I am slowly making more....

Indeed...I used the drill configuration only tonight to drill a perfect hole by hand slowly in end-grain boxwood only slightly bigger than the drill itself!

There is actually ANOTHER ONE on FleaBay at the moment. In a slightly more "used" condition but we are talking Rio rosewood here so that should be really easy to restore....and real bargain for someone who wants a working bit of tool history!

I would say that you could make a superb modern version of that tool Adam....just up your street.

The difficult bit would be making the cover/chuck pressing. How would you work that into your design?

Not sure mate. On the surface it seems pretty straightforward.
Turn the 'chuck', drill/ream the internal bore, taper the end, and thread the taper.
((luckily my metal lathe has a swivelling headstock) see this link http://www.lathes.co.uk/barker/index.html))
Then split with a slitting saw.

That said though, I would probably thread the top end of the cover, and use an internal taper to close the end of the collet.
A far simpler design, and one which I could probably make!
What kind of tools would one find useful? I see there are a selection of drills and screwdrivers.

Remember that the cover has to have enough clearance to clear the "tools" nesting in the rim.

I made one tool about 1mm too long and it ground on the cover. It's very thin brass...probably pressed and then chrome plated.

As for tools...I think that a modern version would be the order of the day. Philips, flat jeweller's type, drill, awl, small chisel...

Adam - this would make a great sister product to your awl! I would expect the cover to be the challenge depending on what you have available. The original was probably pressed or more 'deep-drawn' (it's quite thin), and note I'm fairly sure it's nickel plate, not chrome - a far nicer warmer tone! The tools do fit very neatly / precisely in the jaws and the actual inserts have nice square section to fit, so the jaws have flats.
Mine has a majority of hole-making tips, a v-point tool (no idea what for) and 2 small chisel-like blades plus the mini nail-puller (if that's what it was). But a multi awl + marking tool may be a route?
If you want to borrow it, shout.

p.s. the cap fixes onto tapered thread on the end of the jaws, with a matching (?) taper female in the cap. So one thread fixes to cap on and closes the jaws. I think that is quite neat.

It would be handy if the user could make additional tools if desired from something readily available such as a small allen key. Although quite what you would want to make that is different to the originals is an unknown.

Ok guys, now look what you made me do...

I bought the one that Martin King was selling on eBay and it arrived today.
Very nice - a bit battered (as clearly shown in the photos) but none the worse for that. (I wouldn't have stretched to the $65 dollar one still available at Rose Antique Tools, or the £50 just sold by Tool Bazaar.) This one is just as functional, and more to the point, feels right in the hand. Just the right size and weight. Tools don't have to be shiny!

Nice though, to be able to instantly read the patent spec,

and see the factory where it was made:

lovely little tools, are Douglas & Jim tempting us towards another slippery slope? :-# resistance is futile

There are two more up on FleaBay...not showing you where cos that might upset someone bidding but on is a Stanley copy! How cool is THAT!

I made a chisel out of some O1 steel and hardened the head....works fine...blinking well cut myself on it too!

The rosewood on these tools is just beautiful...they simply don't make things like this any more...and the patent is just a beautiful....part of the research that Douglas and I did Andy when we were first interested in these wonderful tools. I am so very pleased that it was you that won that auction...I thought it might be right up your street! Well done mate! Eight quid! Bargain. What can you get for £8 these days...pack of Stanley blades maybe? :wink:

If it's a slope, Jim definitely started it. I just joined in a bit later. So Andy's got one (well done!)... Scouse, you need one of these I think :wink:

p.s. anyone any ideas re intended use. It doesn't strike me as a specific woodworking tool because of the puller and the two very small chilsel-like pieces. I offered leather working or sail-making. Any thoughts??

is it heavy duty enough for leather working or sailmaking. It is difficult to tell from the photographs, but it looks to me more like a gentlemans tool than an industrial one?

condeesteso":1fnkp4mo said:
If it's a slope, Jim definitely started it. I just joined in a bit later. So Andy's got one (well done!)... Scouse, you need one of these I think :wink:
Click to expand...

I was about to say Jim starts most of them, then you jump in too! I can imagine you two standing round a cauldron of boiling Norris infills like Macbeth's weird sisters, sticking pins laced with the dissolved remnants of various ancient woodworking accessories into a wax doll wearing a Liverpool shirt! :lol:

I have to admit that these tools have bypassed me altogether, never seen one before. I agree with Marcros though, they do look more like they would exist in a gentleman's travelling kit than a workshop, and I would think you did well to get one with all of the bits.

I do quite like them though, might keep an eye out for one... OW! That must have been another pin going in...

Ok, here's some more slope greasing. Anyone wanting to know where to get one of these, should just flick through the latest catalogues.

This is from an undated EC Atkins catalogue - I think this one is comparatively modern and could be a copy after the original patent/design rights had expired:

Note where it comes - alongside the nice leather-clad gizmos. I reckon these were never aimed at any particular trade. They make sense as appealing to exactly the same sort of customer a century ago as they do now - someone who thinks it's a neat little device, which might come in handy, and doesn't cost too much. Swiss Army knives have the same promise.

This earlier Melhuish catalogue (1921 I think) devotes two pages to the things - which was perhaps necessary to introduce them to the British market, but is a useful guide as to the tools, which I would describe as anything small enough to fit inside. Horace Britton was clearly not the only one to think of the idea.

So, now you know what to look for, who's next?
C

'Joshua, the second son, named for his father and grandfather, was bound out at the age of nine years to Consider A. and Amasa Southworth, cotton thread manufacturers'.
It appears it was this Joshua who was the toolmaker, and had a background in 'cotton thread'.
And he was bound out to a certain Consider Southworth... I wonder now, in the 21st Century, did the Beckhams even consider the forename Consider?
Meanwhile, maybe a gentleman's tool... except for his background and work environment. Stoughton is about 10 mi from Massachusetts Bay, and 15 south of Boston. I still go for sailmaking... call me a romantic.

p.s. well researched Andy - I could easily believe that it was a Swiss Army of its day, but still wonder if it had a specific purpose from it's maker.

I think we agree that both of our tools contain the original tools and yet they are different. Mine seems to be more towards screwdriver type tools.

I would like to speculate a bit here and say...could it be possible that there were different sets with the same basic handle specifically aimed at different uses?

Looking at the Brittons or Britton copies in the two catalogues shows variants with 8, 10 or 12 tools, so I'm happy to think that the selection was fairly random.

Anyone working in a production environment would not want to waste time swapping tools around - they would expect a handle on each tool they needed. So I favour the idea of the nineteenth century handyman buying these - but it's only idle speculation really.

Family and business history; awl manufacturers originally, may be of interest/inspiration to Adam should he fancy making a multi-tool that looks like that amazing awl on the pass-around...!

A bit of multi-tool history, it's a bigger slope than I thought! Britton is on page 4.