I've only just managed to join this forum, but have often referred to it in the past, researching many things, including buying advice. Since I have just taken delivery of a Hammer A3-31, following extensive research and set it up, I thought I should return the favour and post something about that experience.

First of all, why the Hammer? I’ve been using a really good Record Power PT300 planer thicknesses which has served me well for the last 8 years; it’s been the perfect beginner’s machine and it’s behaved faultlessly. However, I find the whole blade replacement process extremely tricky and have invested in several blade-setting devices which help a bit, but I still have to set it up using the length of wood method . . . it takes me an age to do. And, invariably, I get it wrong and have to start again. Plus, I have to send the blades off to be sharpened. As you can tell, I lack patience and skill at these things.

And then I had my head turned by the advantages of a spiral cutting head - easy blade replacement, quieter operation, great finish! So I started to read up on available machines and had pretty much settled on the Axminster AT310SPT - I needed 30mm wide and enough power to process raw timber in big sizes. But, I was really put off by the need to remove the fence when switching from planing to thicknessing (you don’t have to do that on the Record Power). And then I came across the Hammer A3 31, which is way more expensive than I planned, but which did not require fence removal. Plus, and persuasive for me doing long lengths of heavy timber on my own, the Hammer can also be equipped with extension tables. Researching online, I couldn’t find anyone with a bad word for it, so I went ahead with the purchase.

Their sales team were great; they promised a delivery date and all went smoothly. First impressions of the delivered box are super impressive - already, it’s obvious that this machine doesn’t come from China! The pallet is huge and robust and the packing is thick honeycombed cardboard. The delivery man dropped it off his palette in the middle of my temporarily cleared workshop. Unboxing was straightforward and everything was in place. The quality of build on this machine is way above anything else I’ve looked at (I guess it should be at the price!) and there is evidence of good and thoughtful design everywhere. The instructions could be much better and clearer, but are nonetheless adequate.

Like all suppliers of woodworking machines, makers seem to assume that we will all have a pallet truck to lift the machine from its pallet! No chance! I’d have welcomed some instructions in the manual on how to do this without a pallet truck, but probably Health and Safety precludes them doing so! We used two 3x2s threaded underneath and four strong guys to lift it off the palette and into position on the floor. Just make sure that there is adequate clearance between your fingers and the floor before doing this! A fifth person would have been a good idea to stabilise the lift.

Unwrapping and setting up was very straightforward. Annoyingly, they do not supply a plug and the provided lead is too short to be of any use. The sales team really should have warned me about this! It prevented me getting going straightaway! And too, I failed to notice that the extraction duct is 120mm, whereas my whole system is 100mm. Amazingly, there are not that many 120mm to 100mm reducers online that I could fine so, to save time, I ordered one from Felder Group at an outrageous cost . . . this is exactly the kind of thing that their sales people could have helped with, offering the reducer as part of the deal. While waiting for the reducer, I simply cut the base off a plastic jug and duct taped that in place as a temporary measure.

Only one minor assembly niggle - there is a plunger emerging from the nearside head assembly which is attached to a safety switch. The infeed table activates this when down for planing, and the extractor hood does it when thicknessing. In my case, the conical head on the infeed table which activates this was too far out, so the table would not close. It was a simple matter to wind it in slightly.

Let me repeat, the engineering and build quality on this machine is breathtaking compared to Chinese machines - that teutonic attention to detail we find in German cars is evidenced here. The surfaces are beautifully finished and the helical cutting block is a work of art! Both infeed and outfeed tables lift together with no effort, assisted by a pair of massive springs in each hinge, such that, when lowered they close sweetly rather than crash into place. I am, too, well used to winding down the thicknessing table in order to swing the extractor hood over - the PT300 is the same. However, the single pillar support (unlike the four corner screw thread supports of the PT300) does have to be unlocked for adjustments and relocked for thicknessing. But I am already getting used to this and enjoying the accuracy of the scale (I am awaiting delivery of the aluminium wheel with its embedded dial indicator). As might be becoming clear, I’m an Industrial Designer myself, so I really appreciate good quality, robust construction and thoughtful design.

The fence is well engineered - it mounts to the end of the infeed table, so it goes up and down with it but, unlike the PT300, it doesn’t need to be set In a certain place for lifting the tables. It glides smoothly on the extrusion attached to the infeed table and locks securely with a small hand wheel. It’s very clever and works well.

Firing up the machine is a revelation - it hums into life like a serious industrial machine equipped with quality bearings and tight tolerances. And, my goodness, it’s so quiet compared to all my other kit and way more silent than the older PT300 - frankly, that’s fantastic. And then to work! Everything claimed for this spiral cutting head seems to be true - it’s by some margin way quieter, it leaves a great finish and the shavings fly up my 100mm flexible extractor pipe. After getting used to the machine with smaller boards, I took a 2m length of 30cms wide and 70mm thick oak, that had been milled from a local fallen tree several years ago. It was too all over the place to risk on the machine straightway (at least not single-handedly), so I spent some time knocking down the high points with a hand plane first. But, after that, I set up additional supports at either end and the long tables came into their own as I began to get it flat - it powered through the task with ease. Then, I reset the machine for thicknessing, having measured what I thought was the thickest point - this was a long and very heavy board, so I was worried that the feed rollers might not be up to the task of grabbing it securely and clamping it to the table, but it grabbed it securely and chomped through it, easily taking off more than I had planned without any pause or complaint. Three passes taking off about 1.5 mm a time whisked the board through the machine with ease.

As you can see, I am delighted with this new machine. Before it arrived, I feared I might be a sucker for a more expensive Austrian machine which actually offers little more than the Axminster. And yes, I am a believer in good quality engineering and design and I am happy to pay more for it, but my fears that I was seduced by all of that were unfounded. Now, I can say without hesitation that it is absolutely worth the extra money if you can stretch your budget, provided, that is, that it continues to perform with extended use . . . we shall see!
O

DickPowell":13q37dis said:
The fence is well engineered - it mounts to the end of the infeed table, so it goes up and down with it but, unlike the PT300, it doesn’t need to be set In a certain place for lifting the tables.
Click to expand...

Well...the fence needs to be towards the forward position (at least over half the tables width) when tables are lifted, otherwise the cutter guard on the backside crashes into the cabinet and bends. Only major design flaw I found.

Minor is that the knob for adjusting the cutter guard height is very small and flimsy and threads strips easily compared to earlier generation a3-31 (which I hade before), I replaced this within days since I was used to my old large and solid knob. Feels extremely cheap that they save a few cents on this, a handle that is used very frequently.

Other than that I'm also very satisfied with my a3-31 and the new generation is a step up in almost all areas compared to previous. 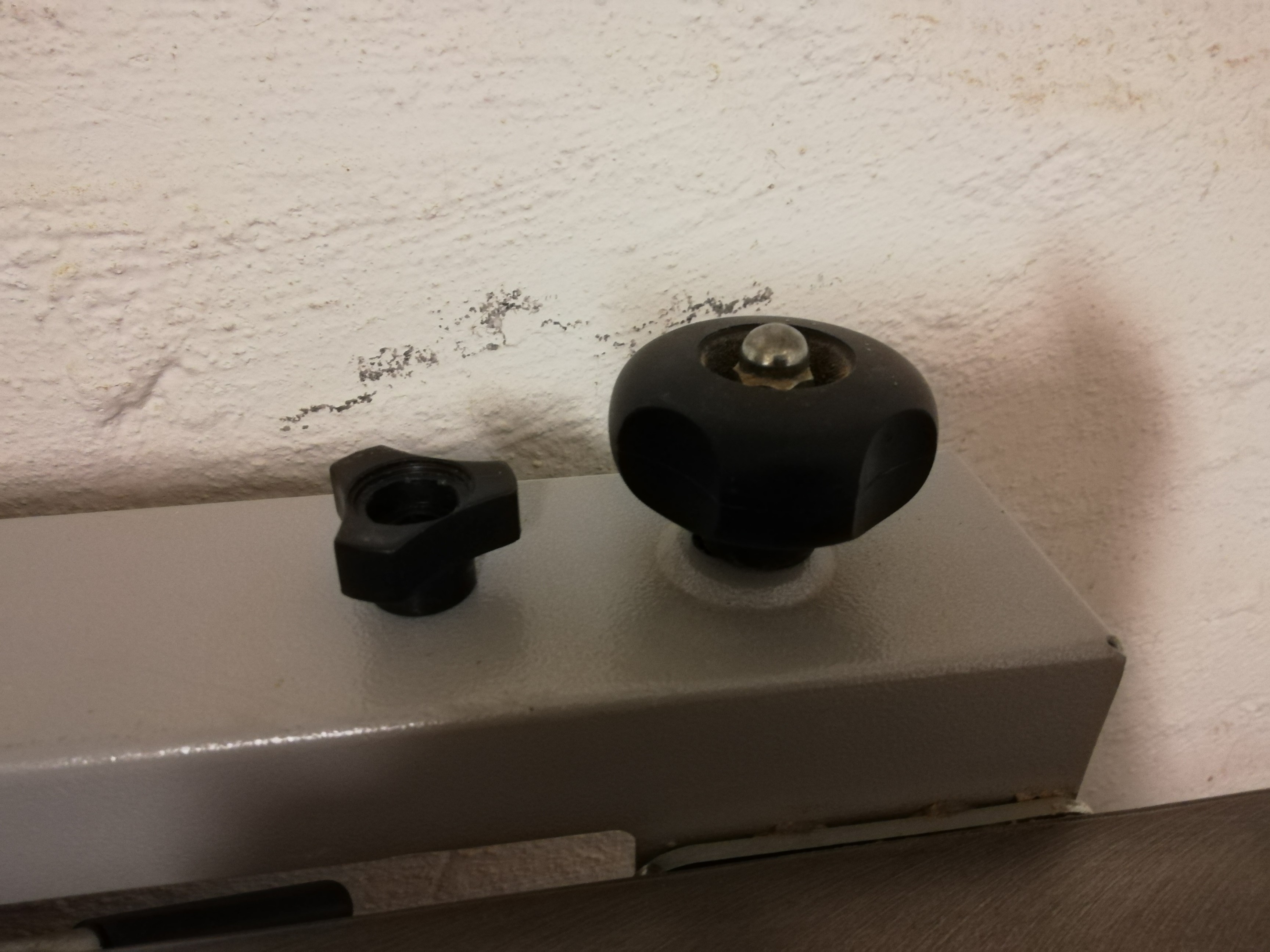 I thought these were made in Taiwan. maybe assembled by teutons. altendorf now have a factory in China.
dont believe the bull.
ps that's not saying anything about the machine or anything .
just germans love outsourcing profits same as the rest of the west.
J

but love to hide the origins to kid people on.

I don't know why people rag on about stuff being made in the orient. If it's up to snuff, it's up to snuff! It's not like you could afford it being made completely on the continent or the UK anyway, If you can afford it, Otto Martin in Germany is the company for you. A Sedgwick CP for example, costs new about £5.5k ex-VAT, I wouldn't be surprised if that price jumped to over £10K if every component was made in Britain, not just the castings and sheet metal.

It's all to do with manufacturing standards rather than where it was built, as nice as it would be to have a machine that's completely built in the UK, you're never going to see it again. I won't be surprised if we start seeing stuff being made in Africa once it begins being too expensive to manufacture in China.
T

johnnyb said:
I thought these were made in Taiwan. maybe assembled by teutons. altendorf now have a factory in China.
dont believe the bull.
ps that's not saying anything about the machine or anything .
just germans love outsourcing profits same as the rest of the west.
Click to expand...

I was told the same thing re. outsourcing. I have an older German built Hammer P/T. I asked the question re. a new bandsaw origin and Hammer eventually admitted that some parts were Chinese. I bought a Minmax instead. V. pleased with it.
Hammer fence is poor and distorts, even if German, my Moore & Wright is used frequently as the fence does move out of true.
You must log in or register to reply here.
Share:
Facebook Twitter Reddit Pinterest Tumblr WhatsApp Email Link