I just ordered a Record RSBG6 Bench Grinder - can anyone recommend a decent (but fairly inexpensive) gouge jig that’ll work with it?

Failing that - any plans for an easy DIY gouge jig that I could make myself in an afternoon...

There was no way I could afford a Sorby ProEdge or Tormek style whetstone sharpening system after buying the new lathe so its had to be a fairly basic grinder...

Have a look HERE

The book -- Keith Rowley Woodturning, A foundation course -- has a simple jig, basically a block with a slot in it and a bolt running through it. 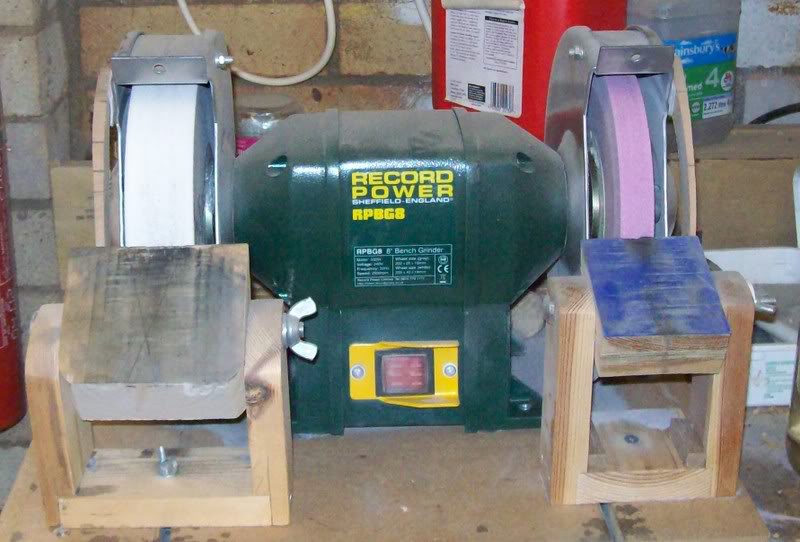 A version of the style linked by Dalboy, with dimensions.

Two main observations the Tall back stand is only appropriate for an 8 " grinder Leave it out for 6" grinder.
The tool clamping blocks are better with a Vee notch rather than a round hole to accommodate and grip a wider range of tool diameters.
O

Thank you guys this is all really useful!
O

nev":1zwo0yvy said:
The book -- Keith Rowley Woodturning, A foundation course -- has a simple jig, basically a block with a slot in it and a bolt running through it.

A little addition and I could maybe use the standard gouge and skew jigs from the proedge with this...

OldDave":1wac0byh said:
….
A little addition and I could maybe use the standard gouge and skew jigs from the proedge with this...
Click to expand...

That's the basic setup on my grinder

I do have Both the Tormek & Sorby versions of the Jigs and a home made version of the same I made before acquiring them.

For convenience I have them set for different tool profiles but they are interchangeable between Grinder and Pro-edge if needed.


I find a Drop Down block (for want of a better description) an easier method of setting tool protrusion consistently.
O

Cool... I’m actually thinking V-Block as that’s the jig I use for my gouges on the proedge at the club I go to.
Attach a flat plate with the t-slot the Sorby table has and I’m laughing (I think!?)
B

Nice one, just ordered this jig!

I have the "gouge holder, 2 guide rails & a flat platform" equivalent which I bought from Andrew Hall - when he was at a club demo night. He also provided a tutorial video on how to use it for all types of tool. There were however no written instructions.

The product is not really any different to any other jig, but as it's low cost and works well, it has a value that's greater than its cost IMHO.

I mounted it on the 8" Record grindstone with two wheels - which I already had. To fit the jig requires some alteration to the grindstone because you have to remove the old tool rests and add the new ones. Whilst you could only change one rest for one wheel, it makes sense to change both and so the full kit is required.

I took pictures of the setup used by Andrew Hall - he used two thicknesses of 18mm plywood for a 6" wheel. For my setup, I found that only one thickness of 18mm plywood was required. This is because of the difference in height of the two grindstones. Cutting back the steel around the rests was quite easy - I used a hacksaw to cut the steel and then used the grey wheel to grind the cut steel flat on the side covers.

The result is no different to something specifically manufactured. I didn't want to operate the wheels without guards, when tidying up the LH wheel, so I reversed the wheels when doing one of the sides. My jig used a butterfly grip to lock the fingernail jig. That's changed to a knurled knob - Andrew sent me the new knob, so as far as I can tell it's "identical" to this version being sold.

Most turners will probably already have a grindstone. Choosing again, I probably would choose the 8" for longevity and straighter grinding on a bigger diameter, but for a slower grind I would definitely choose the 6" wheels. Both Record wheels have the same speed of motor but the linear cutting speed of the smaller one is less. With HSS tools it doesn't matter too much and with a CBN it wouldn't matter. Andrew suggested sharpening tools with the motor switched off. It takes several minutes for it to stop and this "trick" works for me.

If you want to swap out the Aluminium wheel for a CBN, Axminster have one, but I don't think they have a spindle adapter to match. So, you would need the smaller diameter and a drill in a Jacobs chuck on the lathe or a drill press to reem (drill) the hole to the correct size. For all I know, they may make it for you. It's worth asking if the wheel includes an adapter - it does.

I have one wide wheel and one narrower wheel. The housing can't support a wide wheel on LH side but the standard width is OK on RHS. With the 6" grindstone narrow wheels are available. For my grinder I have the original grey wheel for redefining a tool and the aluminium wheel for sharpening. I plan to get a CBN wheel when the current one needs replacing. So for now, the only cost was the jig.

I can get two wide CBN wheels, however this requires the LH wheel to not have the side cover - otherwise it would foul the wheel. For this reason I have decided against having two CBN wheels. So far it's not a problem. I had my tools sharpened by Andrew at a club event so it's now only necessary to keep them sharp - wholesale changes aren't required. To copy an exiting profile you also need a marker (sharpie) to adjust the setup for a tool e.g. an OHP pen or similar.