I'm in the process of covering my garage into a workshop, however the lighting is pretty poor.

Is there anything else I could use?

I was going to put spotlights in as it has a sloping roof height from 8 foot to just over 6 foot, however Ive been advised against it.

Should I just put 2 double tubes in?, however the slight problem is with the low roof height is that Ive nearly the tubes swinging pieces of timber around

On the advice of this forum, I am about to replace my old fluorescent with a 'high frequency' double fluorescent which is said to give a steadier light, quicker starting and no hum. They are available in a 'hazardous environment' version which has a strong polycarbonate diffuser which should be proof against the odd gentle knock and also be sealed enough to stop dust and damp.
C

the daylight 'Activa' fluorescent tubes are worth exploring. while a bit more expensive they are the business on these dark winter evenings.

Make sure you wire them into a different circuit from your machines. If one of the breakers gets tripped by a machine, then you are not plunged into darkness whilst a machine coasts to a stop.

i light everything separately; chop saw, table saw, band saw, vice, assembly bench, main lighting. the only thing that stays on is a low energy bulb that lights me in and out. it`s been worth the effort
hth
all the best
rob
J

Slightly off topic but have you painted the walls?

My garage was gray breeze block and with a single 6ft tube was very dark/dull, a couple of coats of white paint on the walls and glossy gray floor paint and it's made a huge difference, much nicer environment. Definitely worth doing if you've got the garage clear.

"Daylight" tubes are definitely worth getting if you are likely to spend any amount of time in there, transformed my workshop and made it a much more pleasant place to work in as well as more efficient task lighting.

Hi, phil p - I'm phil. p
This has occured on another thread before. You need another source of light to prevent strobing - someone informed me that modern fluorescents don't cause it, but that was just after I'd fitted new ones................ and yes, they do. (sorry, not very clear - this refers to machine tools)
M

Regardless of the best type of light source [which is of course important] simply painting the walls and ceiling bright white is without equal. It transforms the workshop and the mood.
E

On a practical rather than aesthetic note, You'll get more value from the six-footers (single or double) if they're aligned across the garage (parallel to the short axis) rather than along it. They emit light in a figure-of-eight pattern, roughly speaking.

It amazes me how many electricians think it should be the other way round.

Eric The Viking":lgb9c6kj said:
They emit light in a figure-of-eight pattern, roughly speaking.HTH,E.
Click to expand...

Explain that in simple terms (drawing) for me please E. I didn't know that!
I'm not an electrician btw and the positioning of my lights is purely accidental

The radiation pattern looks like this (in two dimensions of your choice!): 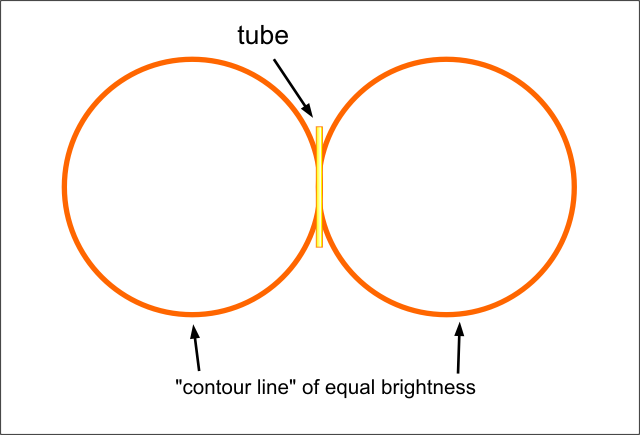 Even when long tubes have reflectors behind them and enclosures, it only modifies this a bit, and doesn't change the basic figure of eight shape. Obviously, if you physically block the light with a reflector that's cheating. It's the same in the directions where light *is* actually coming out!

So if you joined lots of them end-to-end, it wouldn't matter, as all the "8"s would coalesce together in one giant figure of eight. But, when there are gaps between the lamps (for most of us, in the real world), you get better coverage in long rooms by putting the lamps across the room.

It's the same with simple radio aerials too, incidentally. It's not uncommon for people living underneath TV transmitter masts to get poor signal, especially if they're 'repeaters' that are almost always vertically polarised aerials, and often quite low powered transmitters just to fill in specific coverage 'holes'. Relatively speaking the signal at the bottom of the mast is much lower than at right angles to it level with the actual aerials.

I have some lights which are a box containing 4 flourescent tubes each and have reflector/ diffuser things built in.
They are very good and quite low power usage. They are intended for use in retail outlets and produce a slightly yellow soft light and don`t make harsh shadows whilst also being pretty bright.

I acquired mine years ago from an over stock. Might be worth checking ebay though.

Ollie78":3w2c3308 said:
I have some lights which are a box containing 4 flourescent tubes each and have reflector/ diffuser things built in.
Click to expand...

Ditto. Mine is right over my bench, arranged so it can slide along a bit.

It's great not to have strong shadows, but the garage roof is low and I do collide with it occasionally, especially when putting frames together.. I ought to put mesh over it really, but so far I haven't broken a tube.

You might get some inexpensively if you make friends with some shopfitters. I've often seen them in skips (shopfitters*, obviously). For a few quid they might be persuaded to take them down carefully and put them aside. Even if the luminares are damaged, you can get most parts, such as the tube end caps and ballasts separately and quite easily.


*I just had this weird image spring to mind, of a camp fire in a skip, with a load of blokes sitting round it toasting cordless screwdrivers.

Thanks for the replies lads, however could I ask something else related to the fittings.

Does anyone know the difference between a T5 florescent fitting and a T8 fitting?

Someone I asked says the T5 tubes are cheaper to run, however the light produced is slightly inferior to the T8 tubes?


Thanks
You must log in or register to reply here.