Electrics in the Bathroom...?

First off, there's not a chance I'd monkey around in there myself, we'll be getting a proper electrician in, so don't worry about that. I'll cheerfully replace sockets and switches, but I know my limits!

(I have a reasonable grasp of the principles of electricity itself, but from an entirely theoretical perspective, and with little practical-application-in-household-wiring grounding. If you'll excuse the pun.)

My girlfriend has recently bought an illuminated mirror for the bathroom, which she's been after for a while. (I suspect it's at least partly so she can appropriate the mirror that's currently in the bathroom to attach to the bedroom wall.) It arrived today, and I'm a bit wary about it. The ones I've seen before in showrooms have generally had a plastic box around the back of the mirror itself - and since I basically think of the bathroom as 'outside' for all DIY intents and purposes, I've been imagining these as rubber-gasket-sealed waterproof boxes like you'd see on external lights. This thing, on the other hand, has one sealed box at the back which the power cable runs into, which then sprouts cables that run to four fluoro tubes around the outside of the unit, completely exposed.

Aesthetically it's not too much of a problem, as it happens, as one would have to stand right in the corner of the bathroom behind the door to be able to see much of the back of the thing once it's installed (the company markets them as 'ambient wall lighting' or something...), but I'm a bit concerned at what is essentially exposed electrical connections in a regularly-steam-filled room. Am I just being paranoid?

I would suggest that it isn't a genuine bathroom mirror as everyone I.ve seen (including mine) has the electrics sealed with only a grommetted hole for the inlet wire. Mine has a built in rocker switch also which is rubber encased.

I would be extremely nervous about fitting yours into a bathroom and suspect it would not meet current building control regulations.

I could be wrong of course but doubt it and the fact you'vr queried it suggests you probably think likewise.

Lons":3hi71koh said:
I would suggest that it isn't a genuine bathroom mirror as everyone I.ve seen (including mine) has the electrics sealed with only a grommetted hole for the inlet wire.
Click to expand...

By that do you mean '"not intended for the bathroom" or "fake"?

For what it's worth, the packaging and (shockingly well-written) documentation cites the CE mark and a British Standards number that I've forgotten, and states that it's OK to install in zones 2 and 3 (which appears to mean "not in the bath"). The terminal block for the power inlet and other connections are inside a rubber-sealed, grommetted box, it's 'just' the connections for the fluoro tubes which are exposed.

I mean, theoretically I should be able to trust the CE mark and the judgement of the electrician who installs it, but that doesn't stop me from being nervous - if it's safe I'd like to know why!

(It has an infrared sensor to turn it on and off, so theoretically we shouldn't have to touch it at all anyway...)
K

i think it depends on the IP rating of the fixture as to whether or not it is suitable for use in a bathroom...........

sounds to me like you may have a make up mirror like you would get in a theatre dressing room???????

Hah! Something along those lines, yeah. It's basically like this:

if it had four flouro bars - one on each side - instead of just the two that one appears to have, and an IR on/off sensor.

Aside from my reservations about exposed parts, I'm looking forward to it 'cause it has a built-in demister so I can actually shave straight out the shower. ;-)

I'll check the IP rating when I get home, although I suspect that since it's described as zone 2-3 safe, it'll be whatever's appropriate for that.

We have something similar in our bathroom (see below) but the lighting tubes are within the back box. The information on the web site omits to mention that it has a built in demister - basically a heating element attached to the back of the mirror within the back box.
http://www.argos.co.uk/static/Produ...archtext>MIRROR.htm#pdpFullProductInformation

Lons":1g7uxlb2 said:
I would suggest that it isn't a genuine bathroom mirror as everyone I.ve seen (including mine) has the electrics sealed with only a grommetted hole for the inlet wire.
Click to expand...

By that do you mean '"not intended for the bathroom" or "fake"?

(It has an infrared sensor to turn it on and off, so theoretically we shouldn't have to touch it at all anyway...)
Click to expand...

I didn't suggest it's a fake but the only way you might get away with the exposed wiring you say it has is if the wires are carrying low voltage current which is very doubtfull as it would need a box on the back to enclose a transformer. I personally wouldn't accept even low voltage and the fact it has a sensor is irrelevant as it doesn't stop inquisitive fingers, especially children touching it.
Mine is 4 tubes fully enclosed in a box around 30mm thick and hardly visible. It also is a "demisting" mirror but the warmth comes from the heat of the tubes and I haven't seen one with an element.

Possibly as stated a dressing room mirror I suspect but bear in mind, I'm no mirror expert :lol: Would be interesting to see some photos of the offending connections.

Lons":144v36oi said:
Would be interesting to see some photos of the offending connections.
Click to expand...

I got it all out of the packaging again to take such a photo, and it seems - somewhat embarrassingly - that the main thing wrong with this mirror (aesthetics aside) is that I didn't have my glasses on when we got it out the box yesterday! 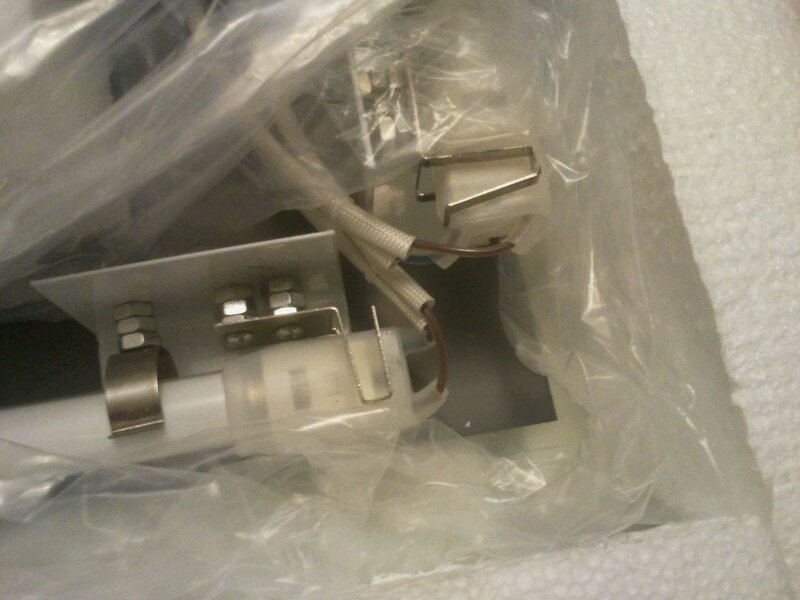 You see those brown plastic-coated wires encased in another clear plastic sheath and then some kind of woven-look cover? Well, those looked a lot more like exposed copper the other day! ;-)

(Looking through the documentation, it's 'IP44', which a quick web search suggests means "safe for splashes of water" and "safe for zones 2 and 3", which is also what the docs say. Although I note that the one Mark Hancock linked to states that it can be used in the bath on the Argos page!)

I've gone another route: the mirror lighting is 12V LED, which will be transformer-isolated from the mains outside the bathroom and supplied as full-wave-rectified DC. The switch is opto-isolated, zero-crossing and will run from a PP3 battery(which will probably dry up before it goes flat). That in turn will be in an isolated battery compartment, preventing access even to the terminals when it's changed and also outside the bathroom. There aren't any exposed wires, insulated or otherwise.

My only problem is the DC has already complained the lights are too bright (and LEDs are a PITA to dim).

Eric The Viking":117u5h9a said:
......
My only problem is the DC has already complained the lights are too bright (and LEDs are a PITA to dim).

That's 'cos it shows up her wrinkles :wink: Smear vaseline on the mirror. Works a treat. Problem solved.
E