Been working on this for a while. As I'm pretty rubbish at design it takes me ages to come up with something I like.

I was initially influenced by the Gilpin leg but didn't feel I had the tools to easily reproduce so after a number of ideas I finally settled on a simple taper. 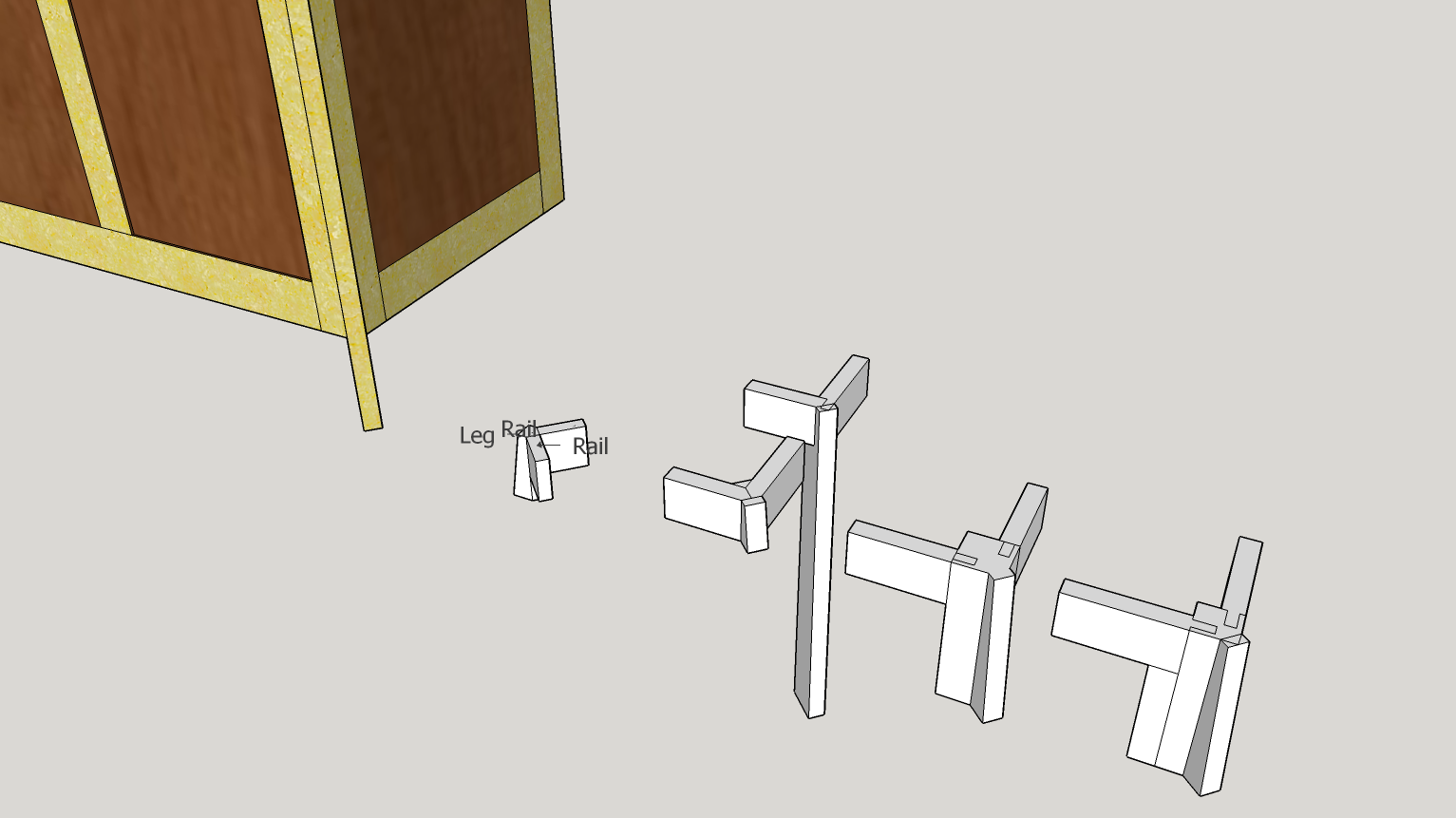 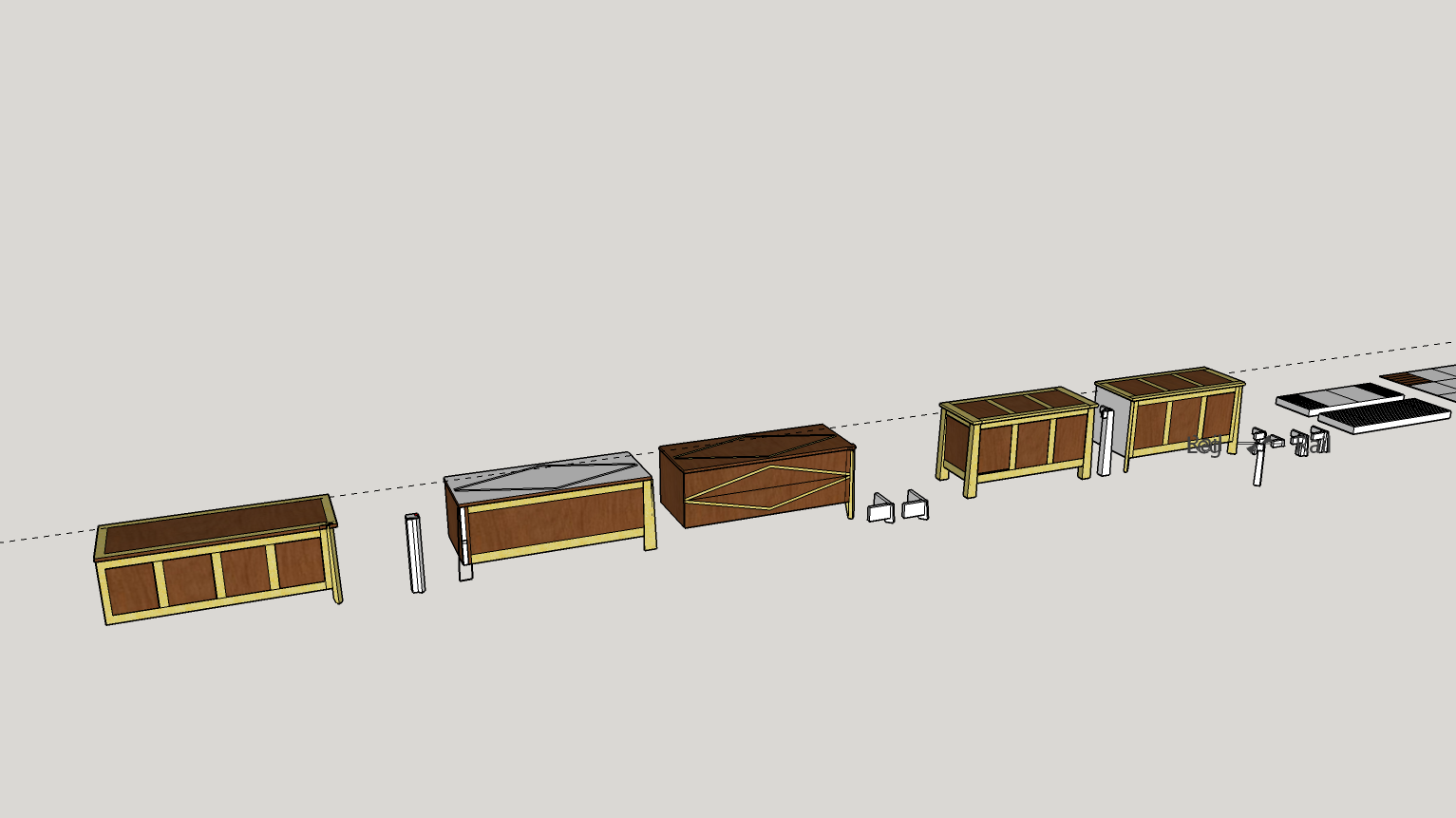 Then, even if I like it I have to make sure that the chief designer is also happy with it. This invariably leads to changes but to be fair she does have a very good eye.

Timber choice was easier, I had to use what was currently in the shed. This was chainsawn sycamore slabs from my father in law and some sapele that used to be a staircase in a middle school. All old enough to avoid much in the way of future movement and quite a pleasing (to my eye anyhow) contrast.

Don't underestimate the amount of time and waste involved in converting chainsawn slabs. This was made worse by the slabs having been stored horizontal from day one which leads to a fair degree of discolouration. Given the final sizes I was looking for I reckon about 50% wastage overall from 50 mm slabs. Some of this might be salvageable for small box lining (circa 10 mm thick) but the vast majority is likely to become kindling. There are a lot of 'inclusions' and other blemishes that I suspect would lead to rejection by some but we both quite like the real life aspect of timber and feel it adds character, - makes planing a pipper though!

I also had some massive issues machining. The sycamore produces a 'straw' type shaving (tightly curled) and the extraction was continually getting blocked. A major pain the the backside having to stop and clear all the time. I also fell in love with my veritas low angle jack plane, - I was lucky enough to be able to 'divert' to a woodwork shop on holiday in Canada but it's been sat in the cupboard for the last few years as I found it uncomfortable. Well some of the sycamore was very difficult to plane and in desperation I gave it a go. It was a revelation in the way it dealt with very difficult grain and the PM11 blade stayed sharp for ages.

Sapele was straightforward resawing the 60 mm thick slabs and joining two pieces for each of the panels.

Anyhow, after all that waffle the final product: 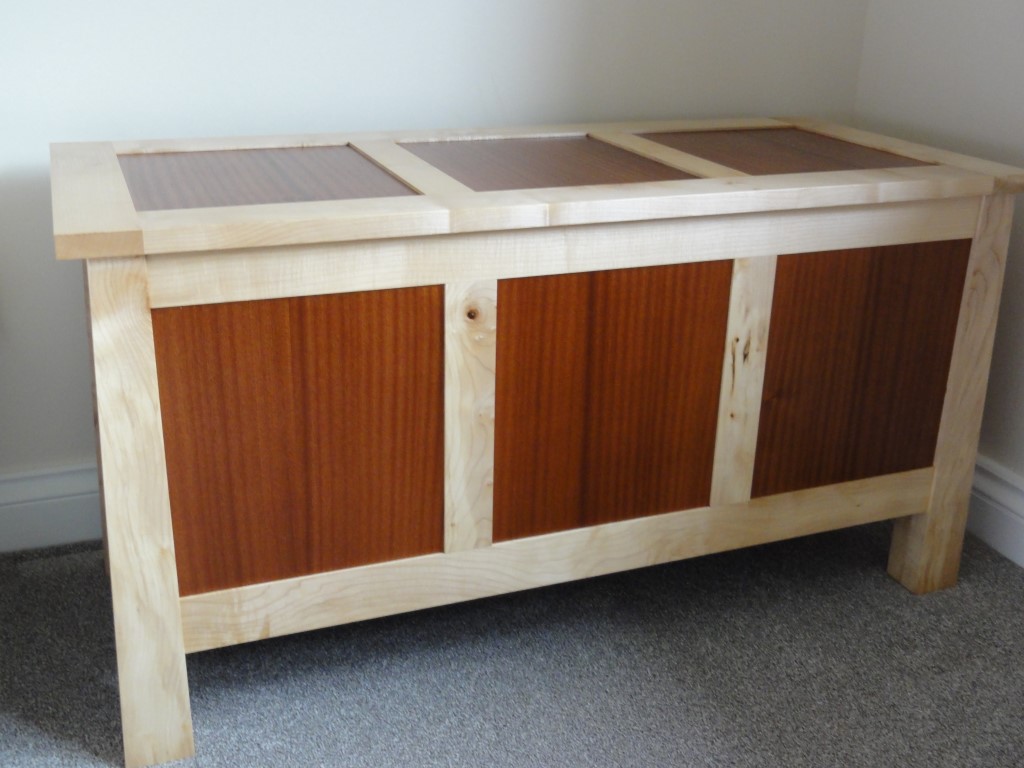 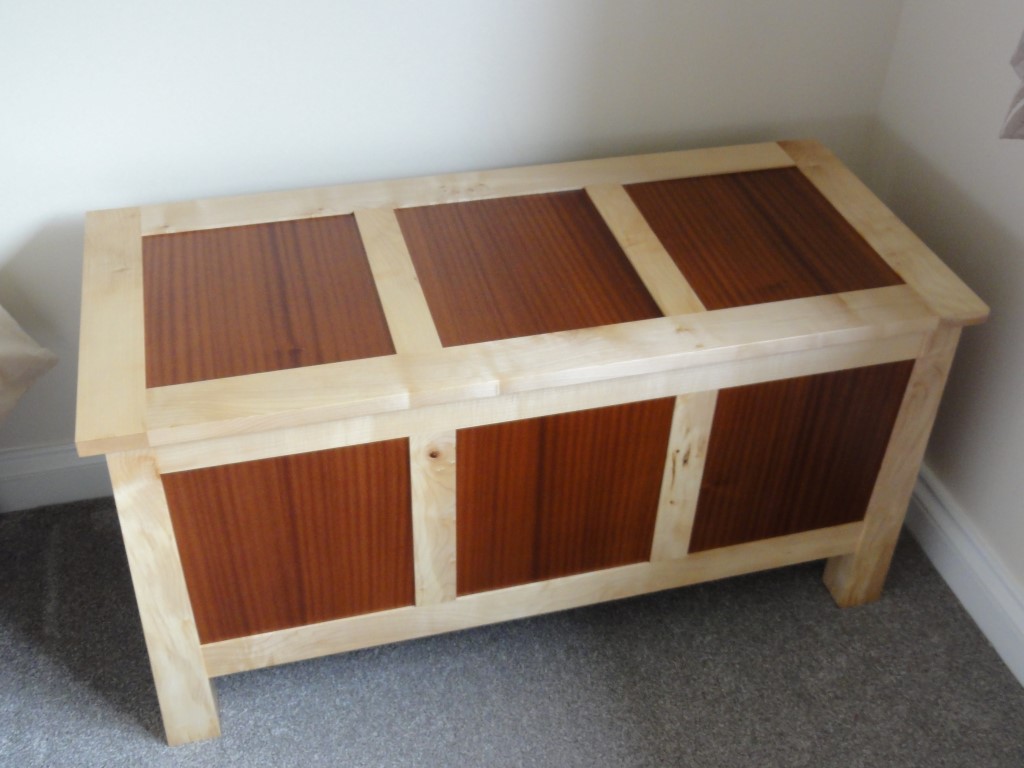 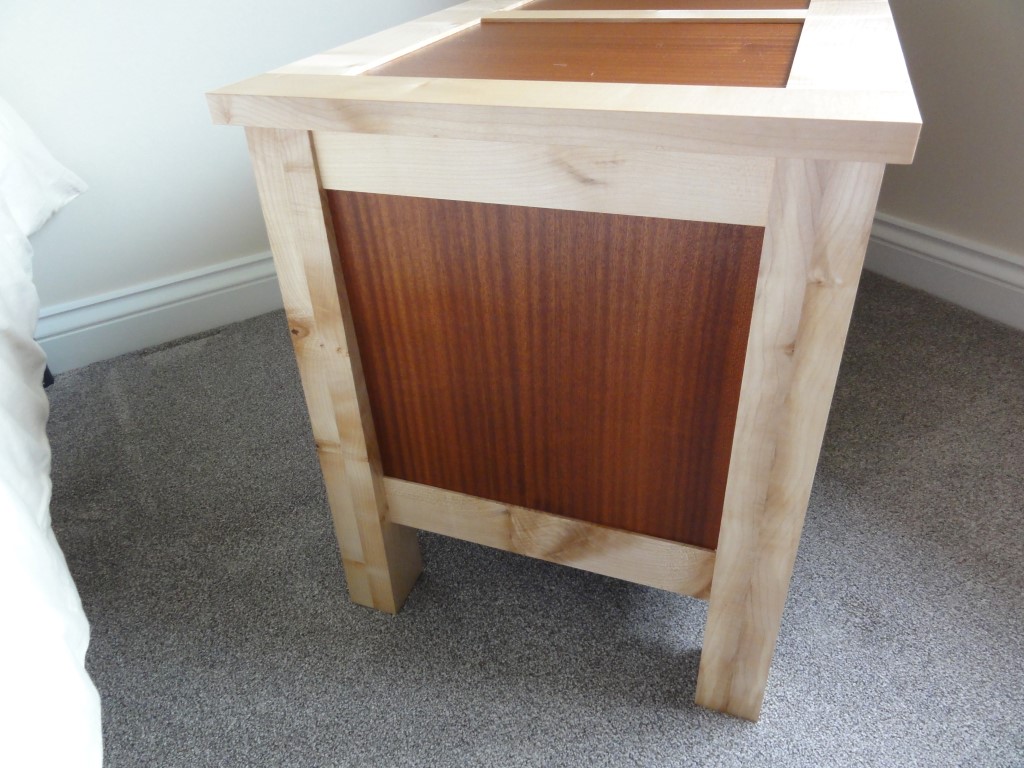 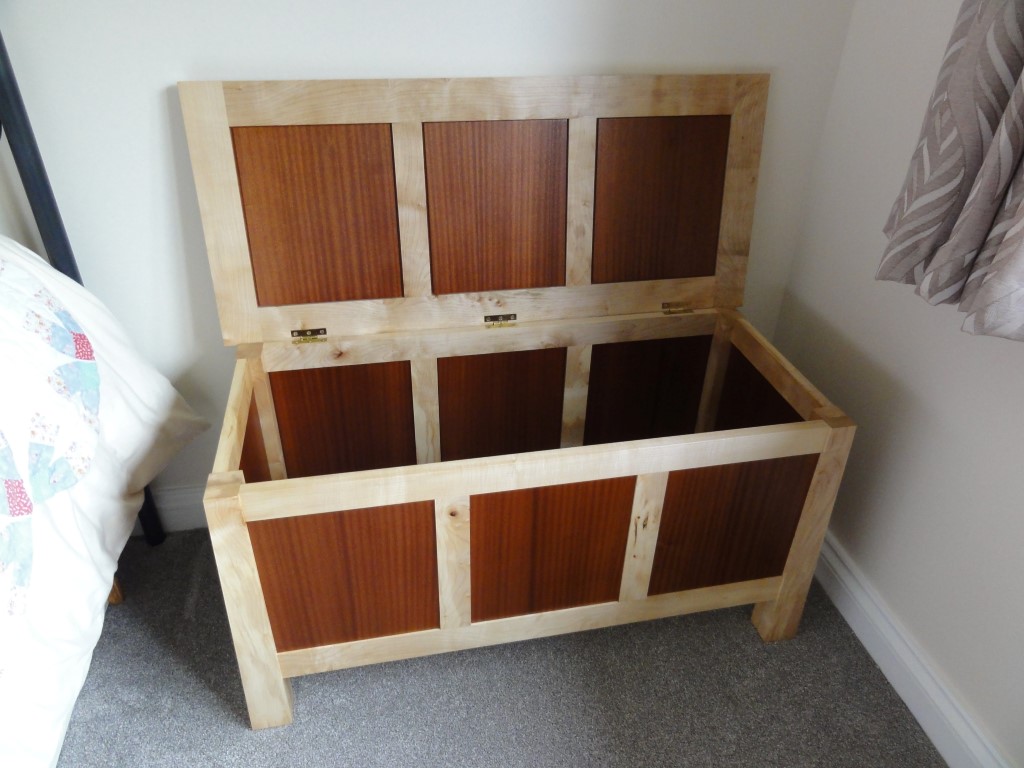 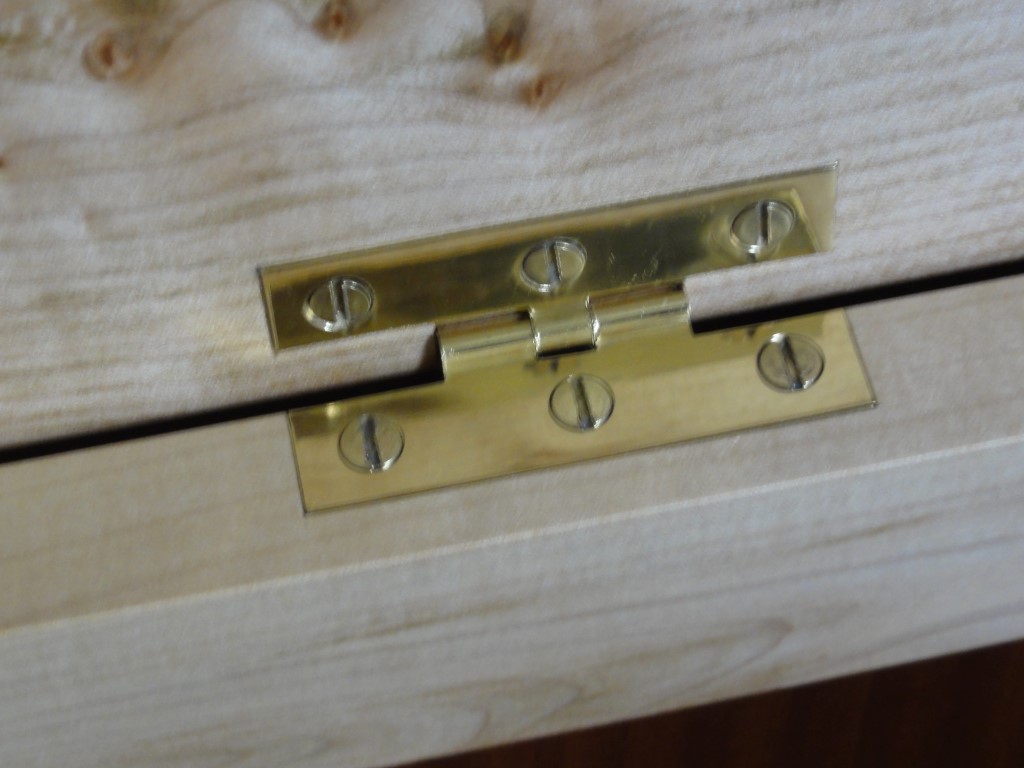 Make sure you decide what hinges you're going to use before you start making it! I had to hunt around to find these 'H' type that have the pivot point far enough back to allow the lid to fully open. Lid stay not fitted yet, - the amount of time they're taking they must be on a slow boat from China.

Excellent job...and getting three hinges to line up without binding on furniture scale work is never easy!

custard":3dzgjo17 said:
Excellent job...and getting three hinges to line up without binding on furniture scale work is never easy!

I agree, great job. I've just been looking at a Barnsleyesque blanket chest with a curved lid and raised, exposed dovetails. I may have a go at something similar after the next project has been dun n'dusted - Rob
G

I like the strong contrast in the colour of the two woods, works very well =D>