Advice on replacing raised beds in the garden

Not fine woodworking, but I would like to pick people’s brains for ideas on replacing the raised beds in our garden. We have 4 beds that are 2.6m long by 1.3m wide. I originally made them from some green oak sleepers probably about 15 years ago. They have lasted reasonably, but are unsurprisingly rotting out now. 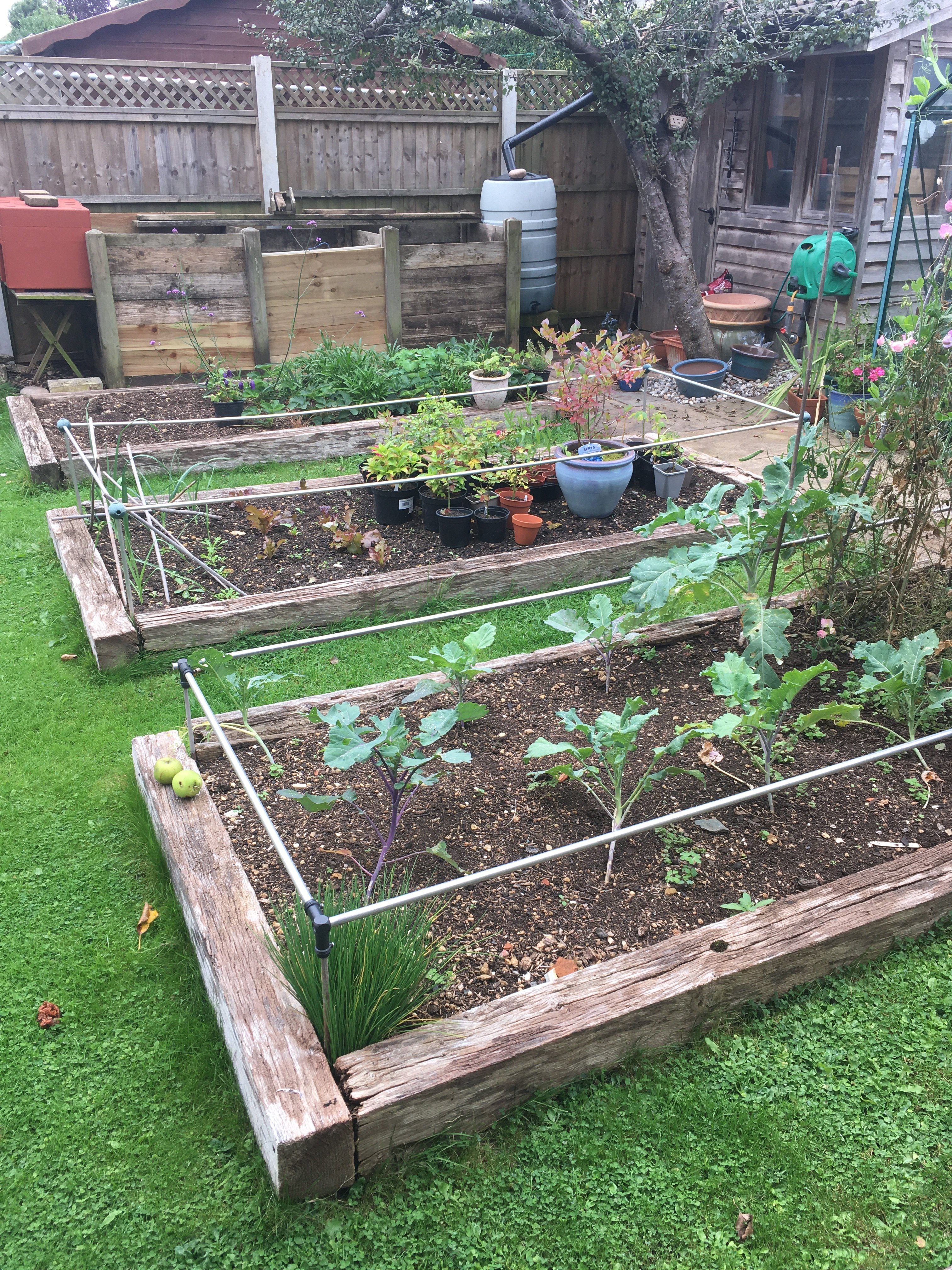 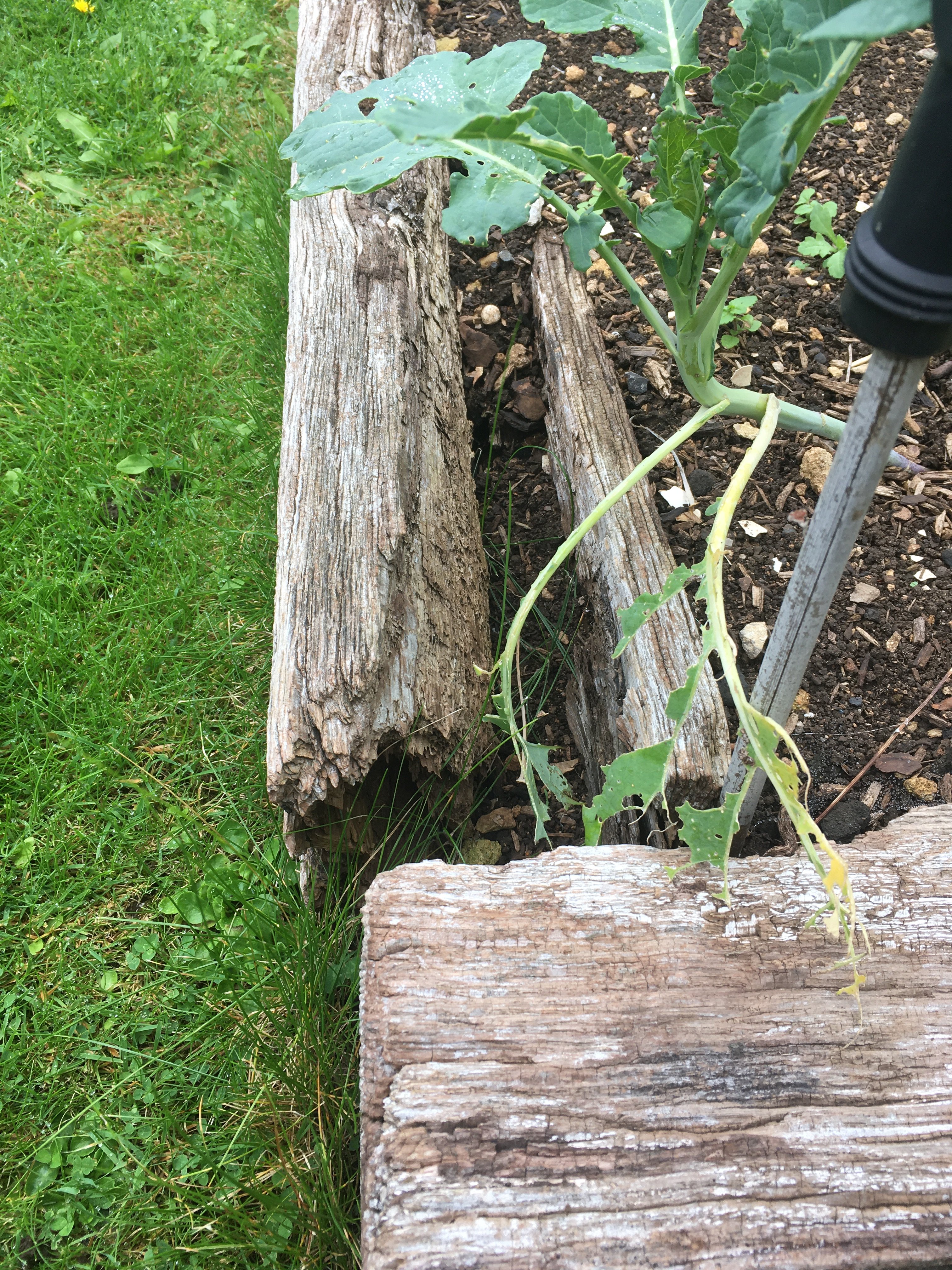 I contacted the place where I bought the sleepers from originally but they wanted over £600 for replacements which is more than I wanted to pay. I am therefore interested in ideas that might be cheaper and will last reasonably. I had wondered about talinised planks slotted into angle iron at the corners so the boards could be more easily replaced when they do rot out. I had ruled out anything involving cement of concrete due to the time it is likely to take with my lack of experience and skill in that area.

So does anyone have any good ideas or suggestions?

Those look like they've got a lot of life left in them! Some sapwood seemed to have rotted, but apart from that...

We have a veg garden that had some large raised beds. About a foot deep, tanalised planks. My wife ripped them out last winter and has replaced the whole set up with mounds of manure and compost and has gone over to no dig.

In essence her solution was ditch the raised beds.

We had 3 raised beds that were also green oak "sleeper size" timber - lasted for about 12 years but then rotted very rapidly - we bit the bullet and had them replaced with blockwork, rendered and painted.

That said it was quite a small town-house garden and the sharpness of the style worked - your garden looks a bit more rustic . . . if it were me I'd still go for blockwork but perhaps clad it with thin timber boards for effect rather then render.

For a start, the timbers are just beginning to look nice. Secondly, what is to be gained by raising your veggies 5 or 6 inches above the surrounding ground? When the timber gives up the ghost in 5 or 20 years time, do your veggies at ground level.
Last edited: 8 Sep 2020

I tend to agree with Mike. I can think of three good reasons for raised beds - overcoming the gardener's physical limitations (e.g., bad back), waterlogging, and irrecoverably poor or contaminated soil. Maybe you could add aesthetics ? There are also bad reasons, principally because all the people on telly seem to make them

If you have a bad back or something, you need properly raised by more than a few inches of extra height usually. Enough to sit on to work. Otherwise, if the ground is ok or improvable, wooden edging round the beds just provides a convenient hotel for the slugs and snails right next door to the restaurant.
S

Try these Raised Beds / Made to Measure

Like big wooden building bricks and a totaly flexable concept.

Try these Raised Beds / Made to Measure

Hi I did see those, but for four we would be looking at over £1500 which is more than replacing the Oak!

MikeG. said:
For a start, the timbers are just beginning to look nice. Secondly, what is to be gained by raising your veggies 5 or 6 inches above the surrounding ground? When the timber gives up the ghost in 5 or 20 years time, do your veggies at ground level.
Click to expand...

I’ll consult the head gardener and see what her views are on that suggestion . It would save money and work for me.
Last edited: 8 Sep 2020

i'll get slammed for this (because it's not wood), but what about composite decking joists/boards/posts - no need for treatment, and will last a long, long time.

Carrots are grown at a good advantage in raised beds over 2 1/2 foot. The reason being that carrot fly dont have the engines to reach greater altitude than 2 foot. Raised beds other than for reasons already listed above by Sheffield Tony are a bit of a nonsense other than for personal choice of course. It's your garden after all! I'd get some strips of cheap metal and clear out the corners of soil and use the strips as internal brackets. Just drive some long screws in to keep the existing timber square. ish. Then cover it all up with soil and enjoy the garden.

We put raised beds in originally because the house we bought 5 years ago was basically in a field adjacent to an old farm yard. It was an overgrown wreck full of bonfire sites, long dead machinery, rubble and a fabulous collection of broken glass. There was an allotment sized kitchen garden, with an overgrown hedge round it, and they had used it to burn about 5000 files - the ones with thin metal edges. The "soil" was burn, rock hard clay. So we built the raised beds about a foot deep and filled them with a mixture of well rotted manure, bought in top soil and some quite rotted wood chips. Then left it fallow for a year. The ground is now in good nick (its been treated again twice since and is just about to get another two lorry loads.

They worked well, but have served their purpose. We screwed up the design by making the beds too big and not enough access paths.
M

As Bm101 said raised beds help against carrot fly if high enough but in my experience doesn't stop the b!**y squirrels digging them up.

I've built four from tanalised decking. (Removed masses of it after moving into new home). Don't know how long it will last though.
O

How about recycled plastic "wood"?
Should last forever so long as it's UV stabilised.
O

Those are not that raised, and it does look like there is a good year or two left in them yet. However a few lengths of 6x2 (150mm x 50mm) treated timber from the nearest builders merchant (not one of the diy sheds) screwed together with timber screws will last a good 6 or 7 years. Slap on a coat of fence paint if you want to pretty them up.

MorrisWoodman12 said:
As Bm101 said raised beds help against carrot fly if high enough but in my experience doesn't stop the b!**y squirrels digging them up.

I've built four from tanalised decking. (Removed masses of it after moving into new home). Don't know how long it will last though.
Click to expand...

Grey Squirrels. Baited wire cage trap. Gas powered .22 pest control gun for coup de grace. One shot at point blank range is humane. Frankly I dislike shooting animals but I am focussed on encouraging bird diversity in our garden and squirrels are nest raiders and plant destroyers. They are so greedy that new ones entering the area have a survival rate of about a day.

How about old scaffolding planks. Some one at the weekend, said they have changed what they use right now, so there may be some going cheap.

In my previous house, I made a raised bed out off weatherboards (I think that's what they are called).

Earlier this year in the spring I made raised beds from treated plywood and 2x4s. They are 8’x4’x2’ and built like a short wall. Lined them with the dimpled plastic used on foundations to separate the soil from the treated wood. Being 2’ high they are easy to access we have 6 and as I still have more plastic left I will make another couple for next year. I also spaced them a couple lawn mower widths apart. I would love to have them 2 1/2’ high but that would have been wasteful of material. I think all said and done they cost about $800Can plus a load of soil. They will outlast me and that’s all that matters.

Pallet collars are a cheap and effective route, lined with damp membrane, six of these were about £45. We’ve since replaced them with treated 2x6, two high, not cheap but it’s finally got an unused bit of ground productive 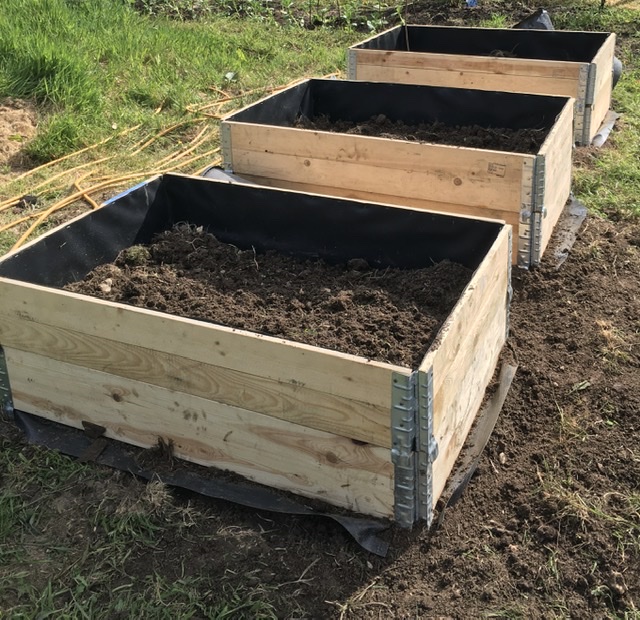