I made a small one of these a few years ago. It's not a bad performer, but rather pint-sized (75mm sole length, 25mm blade width), and a little basic-looking: 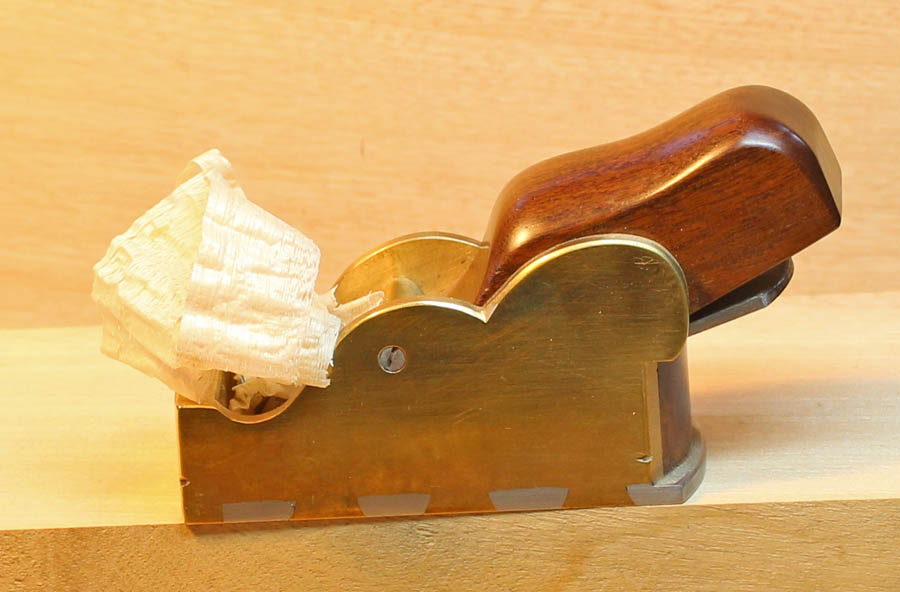 Since that time I've moved on to making screw adjusters, which I included on my second chariot plane. This one is a bit of a departure from most of the original CPs in having a longer toe, not a 'bull nose'. 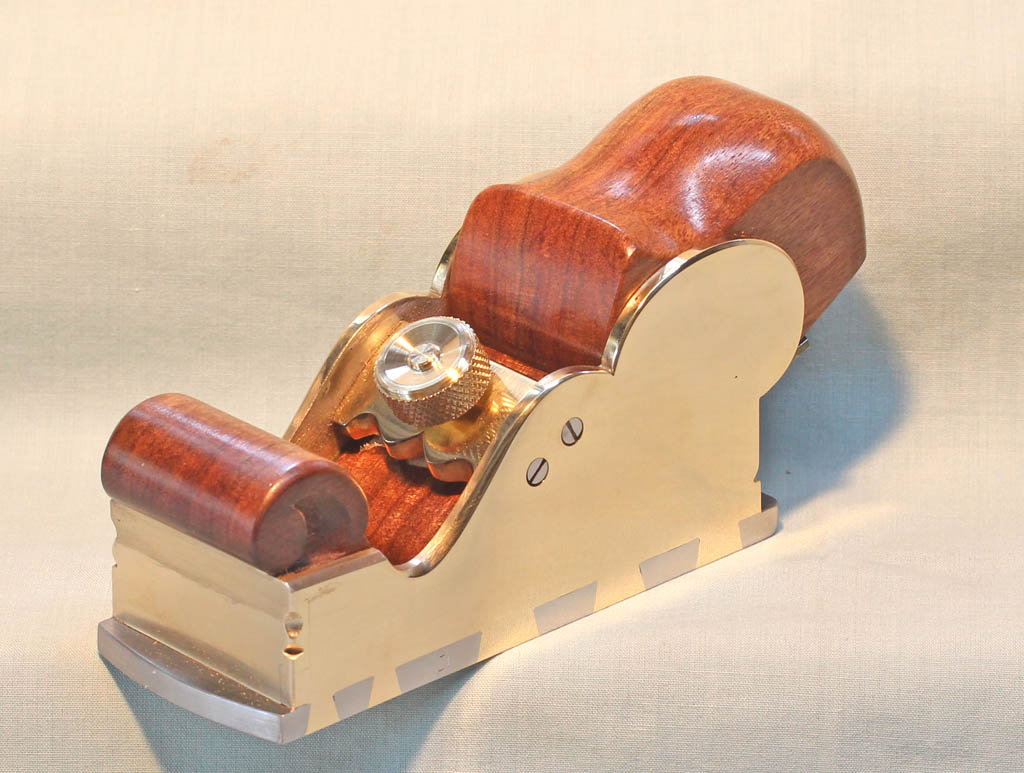 With still a few decent-sized scraps available, I decided to make another bull-nosed version to match #2. More or less - it has the same sole-length & is based around a 35mm blade (used on the Stanley 61 1/2 & clones).

I think dovetailing plane bodies has been well-covered on this forum, but here are a couple of details that might be of interest to would-be plane makers.

I wanted to add a rear cross-piece about 6mm thick to drill & tap for a stud for the adjuster. I could have drilled right hrough & used a couple of long rivets to retain it, but there is very little room & I was afraid I'd end up with a rivet right where I wished to drill for he stud. So I used 'short' rivets in a way I'd road-tested some time ago. The method involves drilling into the cross-piece about 7-8mm & tapping a 3mm thread into them: 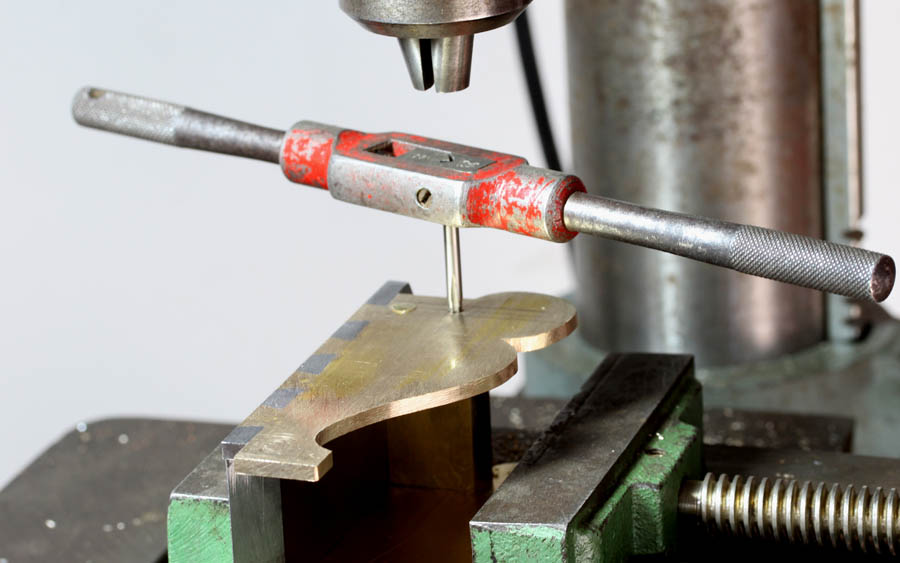 Cut a matching thread on a bit of 3mm brass rod, screw it in firmly & cut it off about 2mm above the surface: 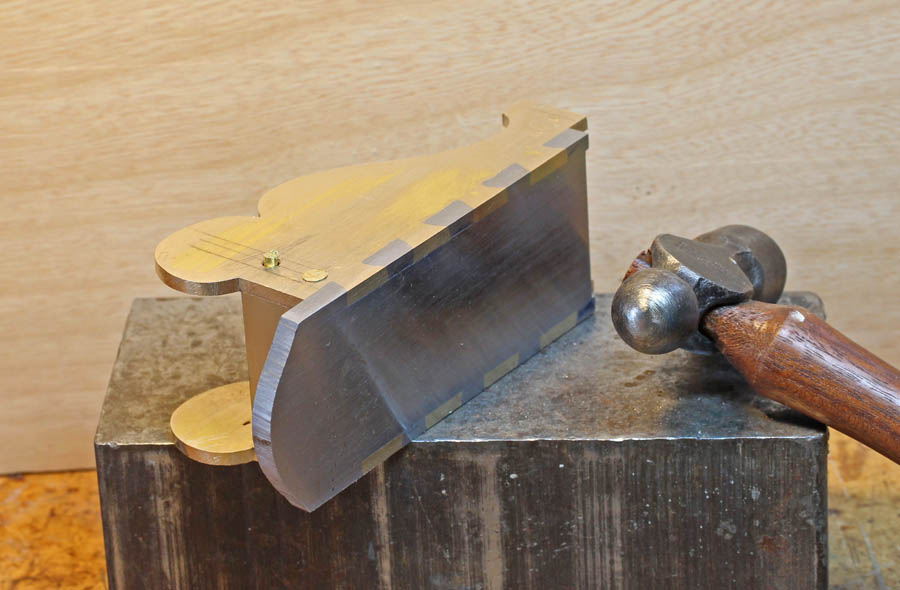 The projecting bit can then be peened down into a countersink & filed flush to the surface. Destructive testing indicates the rivet is as strong as through-riveting, the 'head' fails before the thread strips.

Apart from keeping the fixings out of the way on the rear piece, setting up the nose-piece in a similar way allowed me to finesse the mouth & check it before attaching the nose permanently: 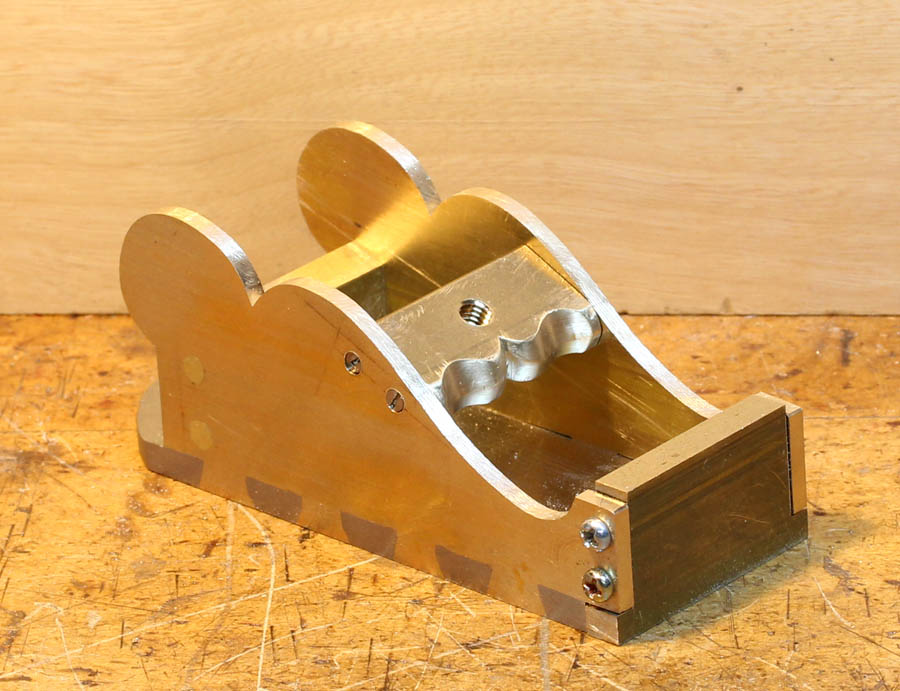 Once I was satisfied I had the mouth right, the 'rivets' were installed & peened: 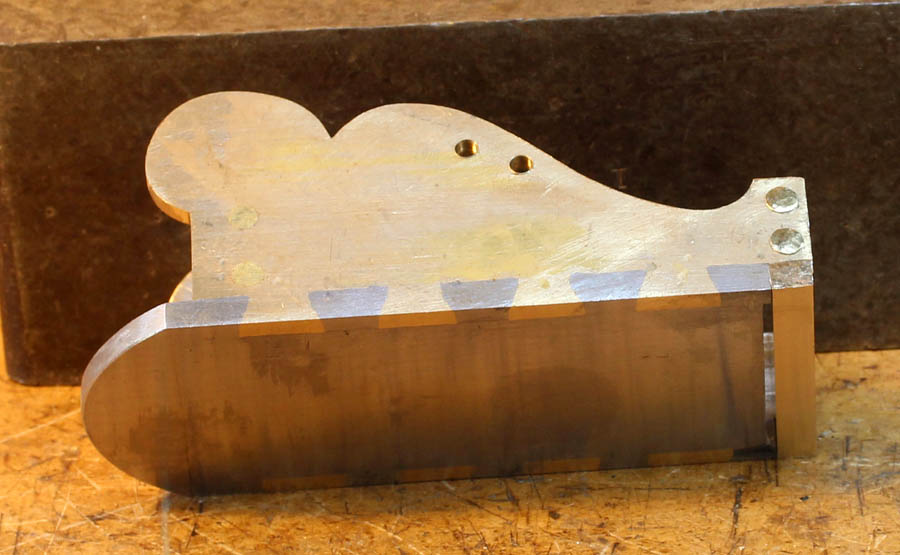 With everything sorted to my satisfaction, the wedge/lever cap was shaped & the parts all cleaned up & polished ready for assembly: 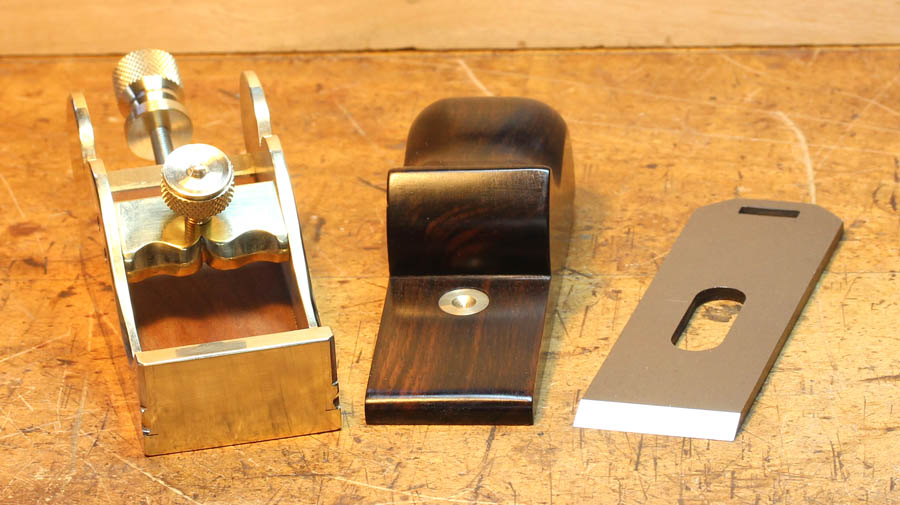 Turned out a goodie - the adjuster works smoothly and is reasonably fine (the stud is M5). There's a bit of backlash because the wheel that engages the slot in the back of the blade has to be loose enough to allow lateral adjustement. Backlash in depth adjusters has never bothered me, but I know it irritates some.

This plane is getting close to my idea of perfection, but it does have one blemish, just to keep me humble. I didn't support the front of the mouth when peening the sides & I managed to distort the pins a bit more than I should have (live & learn!). That meant lots of filing both internally & externally (before the nose was added) to clean things up, but on one side I'd pushed the pin too far out of whack & there's a slight ding that wouldn't file out.

Functionally, it's well up to standard, so I guess I'll keep it: 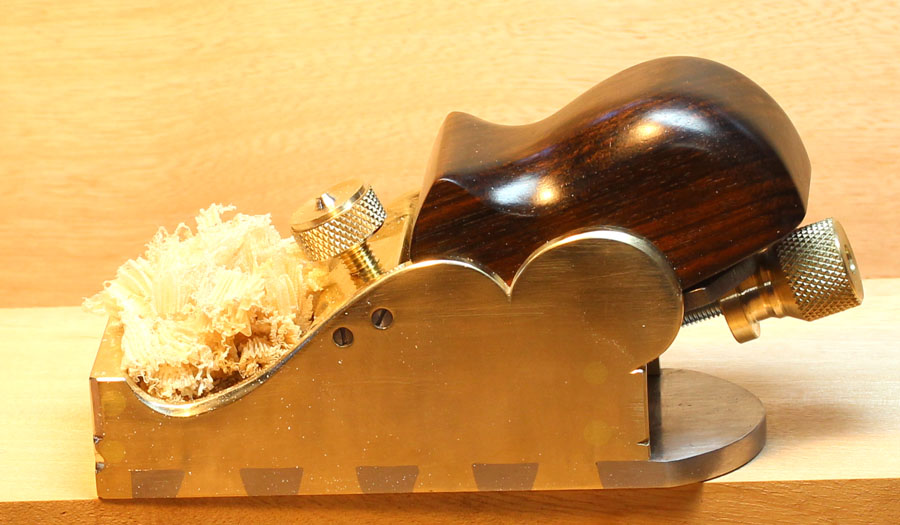 That riveting idea is very ingenious!
It's almost a shame that it's completely undetectable on the finished plane.

Also, I really like the shaping of the wedge on this one - it just shouts out to be picked up and handled. Is it mostly rasp work?

Pretty little thing. What is it for? Who used it, and why was it called a chariot plane?
I

AndyT":maz1ja98 said:
That riveting idea is very ingenious!
It's almost a shame that it's completely undetectable on the finished plane.

Also, I really like the shaping of the wedge on this one - it just shouts out to be picked up and handled. Is it mostly rasp work?
Click to expand...

Andy, it's not an original idea, clockmakers use a similar technique, but instead of threading the brass rod, they hammer slightly tapered, oversize pins into the brass. I've tried that, too, & the pins lodge in there like they are glued, so the threading isn't really necessary, but it's easier than tapering small pins consistently.

The wedge was rouged out with a small turning saw, then yep, I reached for a rasp. That was followed by some coarse cloth-backed paper, some scraping, a fine sanding, a rub-over with 0000 steel wool, then polished. Ebony is wonderful wood to play with,it burnishes up like magic, and I agree, it cries out to be picked up & held. :wink:

I wasn't quite satisfied with the wedge profile, though, I thought it looked 'top heavy', so this afternoon I had another go at it & took quite a bit off the back & deepened the 'saddle' a little. I think it looks better, now: 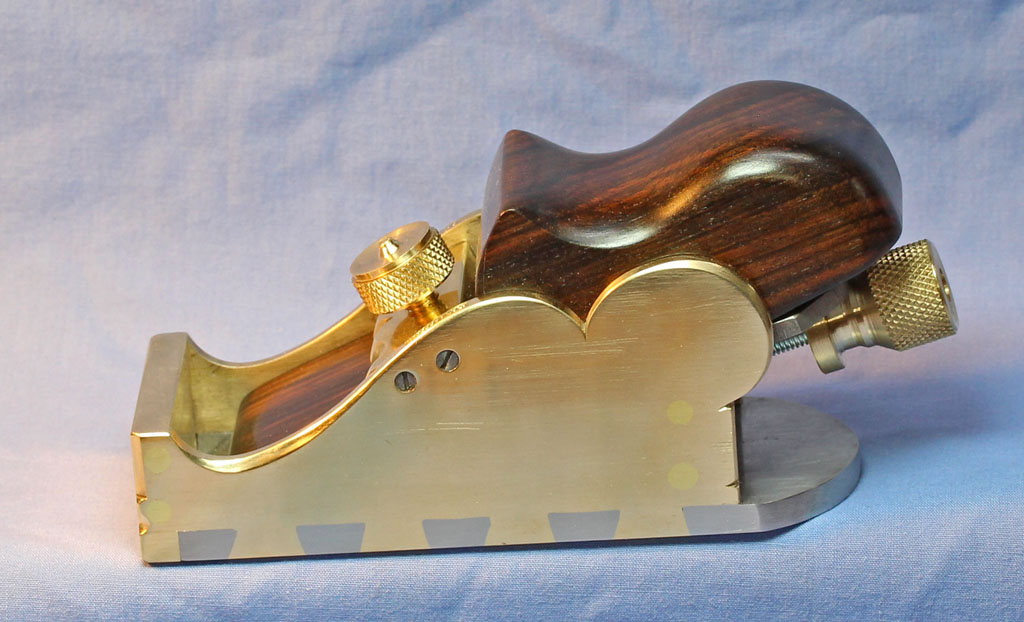 MikeG.":kzgejgtq said:
Pretty little thing. What is it for? Who used it, and why was it called a chariot plane?
Click to expand...

Mike, I have to admit I can't answer the first two questions - I would be delighted to be informed by anyone who does know! As to the name, well, I think that is pretty obvious from the shape, I doubt they were used to make chariots.

Their time in the sun was relatively brief. As far as I can tell, they were made in the latter part of the 19th C & went out of the catalogues very early in the 20th, so whatever woodworkers were doing then, they thought chariot planes were necessary for doing it. As I said, most examples of old ones you see are bull-nosed, so there must have been a demand for short, wide bull-nosed planes for summat..

I first saw one many years ago, in a book on old tools & was taken by the shape, so it was only natural I'd have a go at one some day. Kingshott describes the making of one in his book, though he begins with a casting for the body rather than fabricating it. He doesn't say anything about its special attributes, so I was none the wiser for perusing that chapter!

The one with a toe is really nothing more than a block plane, albeit a little more attractive and much nicer to hold. I went to great pains to get the mouth super-fine on that one, it's something under 0.5mm, which is becoming ridiculously small & prone to choking in some woods, but it makes it far more capable of handling cranky grain than my old Stanley 110. So I use it wherever you'd use a block plane (or maybe even in a few more places, since it can double as a small smoother if necessary)...

The new one, well, I'm sure I'll discover reasons why I had to have it in due course. I wish I'd had it a few years ago when I had to plane a large area of lowered ground for the back of a sideboard I made for SWMBO.

Another beautiful plane Ian. I especially like the shape of the body and wedge on this one, well done.
I

Thanks Hattori, I was pretty pleased with it myself, but was brought back to earth by the last plane I finished which looks he part, but isn't functioning well at all. 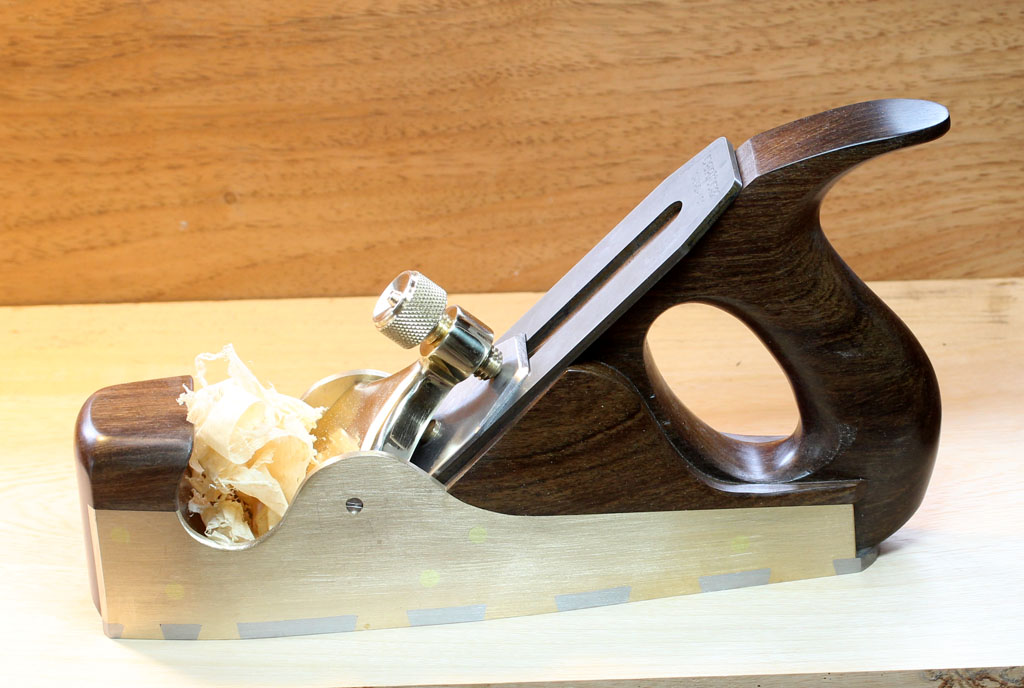 I have diagnosed the problem, the rear stuffing slipped back by a tiny fraction of a mm under clamping pressure when I glued it in. It's something I'm always super careful about, and check & double-check, but missed it his time, somehow. So the blade-block ended up proud of the stuffing by an amount you could barely feel with a fingernail, but it was enough to lift theblade away from the metal towards the mouth, where it should be the tightest fit. I can get a 0.001" feeler gauge in under it for about 4-5mm. Much careful filing (tedious & difficult in the confined space!) required to bring it flat again, and there goes my super-fine mouth. I've got the plane useable, but there's still a ways to go to get it performing as well as I'd like. I'll live with it for now, but will have another go at it later....