By Steve Maskery - 06 Feb 2020, 17:44
- 06 Feb 2020, 17:44 #1334925
Having got the design pretty much nailed down, at least for the top, I decided I should make a start. I want to do this quickly, I don't want it dragging on like the wardrobe did. And I want to do it cheaply, too. Twenty-odd years ago, when I built my current bench I was considerably wealthier than I am now and could afford to buy pretty much anything I really wanted. Those days are over, I'm poorer (but a lot happier) now, but it does mean that my pocket money isn't what it was. So I'm using PAR for speed and I'm re-using my present hardware.

The wood I have bought is Vths redwood. That is a grade which is better than BQ (Building Quality) but not as good as Unsorted. It's good on straight and wind but there are quite a few knots. Fortunately the ugliest knots are largely on the faces; the edges, which will make up the top surface, are much better, and by some judicial cutting, I can eradicate several of the knots.

This is the ugliest

So I'm going to make sure that becomes a doghole.

as will these three

I cut the dogholes with a dado stack

and a jig. If you followed my wardrobe build you will have seen this type of jig before. It is a chipboard base (I realised as I made my first cut that it was not the kindest thing to do to my WC teeth) with a double fence across at 90 degrees. The front half has a hole for an indexing peg. Tunnel guards fore and aft improve the chances of me still being able to count to ten afterwards.

So I line my workpiece up where I want my first doghole to be and make the cut.

Then insert the indexing peg, drop the first doghole over the peg and cut the second and so on.

And before you know it, the whole row is done.

"If it's less than an eighth, it's unmeasurable" - The English Woodworker

transatlantic wrote:Is that woodworm on some of those planks?
*

Lonsdale73 wrote:Where did you buy your timber?

Lonsdale73 wrote:Where did you buy your timber?

Craig at High Peak in Rainworth. There is just under £60 worth there.

Thanks. Is Rainworth the old mining village just outside Mansfield?
I wonder how much more productive I'd be if I spent less time looking for the thing I've just put down?

By Steve Maskery - 10 Feb 2020, 19:17
- 10 Feb 2020, 19:17 #1335513
Whilst I had my dado set installed, I milled a few necessary grooves and rebates, for the sliding deadman, the tool well and the tail-vice mechanism. I have a special fence for doing this, where the featherboards push the workpiece down and in towards the fence at the same time.

But I said I'd show how the dog-holes can be cut with a standard Flat Top Grind 1/8" kerf blade.

The sled is exactly the same base, the same runner, the same tunnel guards, the same fixed rear fence. But the notched front fence is now separate rather than being screwed to the fixed fence. It has a stop block attached at each end, one of which has a screw installed for adjustment.

So now the workpiece can be held against the sliding fence, first over to the left, then over to the right and then nibble out between them. If the resultant notch is too big, unscrew the adjuster screw to reduce the travel, and if it is too small, screw it in a bit to increase the travel and therefore enlarge the notch. 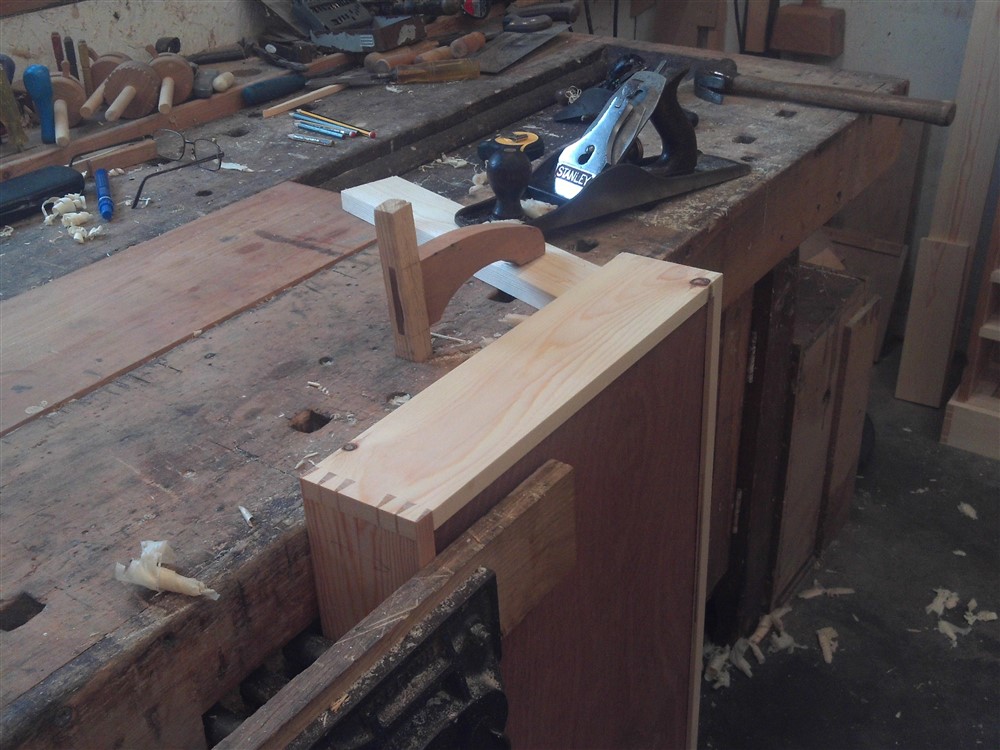 Lonsdale73 wrote:
Thanks. Is Rainworth the old mining village just outside Mansfield?

That would all villages just outside Mansfield then.

As always, jolly nice work Steve, shame you had to cut holes in the top just to get rid of the knots though.