I still have not got my new bench design ready to build, a few issues regarding Incra positioners and physical space so in the mean time I thought I would just put a Jessem Prestige lift into my Kreg table with my Triton Tra001 router, yes it all sounds so easy and should be a straightforward task.

I removed the old setup, a Kreg insert plate with the router and then dropped the Jessem lift into the aperture and as expected it fitted like a glove, but the four retaining screws were out of alignment. This was something I had overlooked, probably a bad assumption that all the imperial router plates being of the same size would have the same fixing hole spacings. The problem here is the Kreg table has just an apperture with four corner fixings which provide both plate adjustement and the fixings for holding the plate down, many others use a recess in which the plate sits. Looking for solutions I found Jessem can provide new fixings for mounting their plates into Kreg tables,

JessEm Router Table | FINE TOOLS but by the time you add on P&P plus duties they become expensive, plus not currently in stock so I dismissed this as an option. Back to basics and I made a frame that I glued and screwed to the underneath of my table so as to provide a recess for the lifter to sit on. I used Kreg pocket hole screws which are very course and have a washer type head to retain the frame. 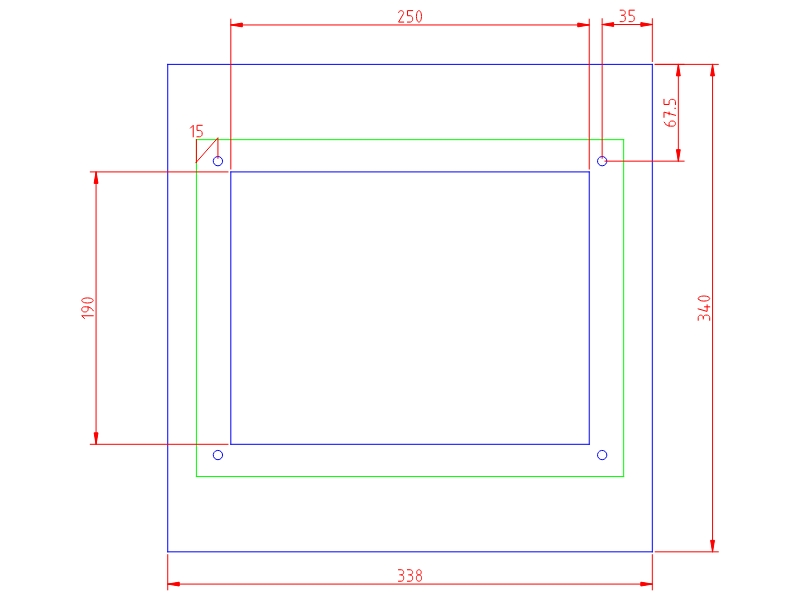 The green line shows the outline of the insert plate and the blue lines the wooden frame.

Next I drilled the Jessem lift to take the Triton router, the four 1/4 UNC screws are on a PCD of 5 & 3/4, or 146 mm and the axis at 90°. The router already has the switch interlock removed but now I also removed the indent pin that locks the spindle in the full raise position which is held by just a single screw and is easily done because I am using the type 8 muscle chuck instead, this allows the router to be fully raised without locking the spindle.

Plate leveling was simple, now done from above the table and not crawling underneath, the speed control is easily accessable but you still need a mirror if you want to read the numbers but I may remove this assembly and mount it remotely which solves the issue.

This setup gives very smooth adjustment with little effort, there is zero play in the mechanism so I can now wind up or down to a required height, previously using the Triton mechanism I only wound up which ensured all the slack was taken out of the system. The Triton has plenty of power and I am more than happy with my intermediate setup, this is only an option if you already have a router though. If I did not already have the Triton then I would have used the AUK spindle and Jessem lift because that is still the better engineered solution in my opinion, the router being clamped round its waist and not hung by it's kneck with the surplus lift colombs!

One last thing, imperial measurements and fractions are just so strange to work with, 10 & 9/16 is so odd.

I am still in the habit of always setting up machines and router lifts on the up stroke although I am sure the threads are so good they don't need it.

Here is the latest update, all should have been fine and working but a few issues. The biggest one is that the Triton router which has been great for many years did not like being disturbed and has gone up in smoke as I was making a shallow rebate so a case of back to the drawing board. I will not be buying another Triton even though it has been a good router and the Dewalt 625 is not powerful enough in a table when using big moulding cutters, to many passes needed. So it looks like I need to get on with my new bench and incorporate a router lift into this as originaly planed, watch this space as I may soon be selling a Kreg table and Jessem Prestige lift with a type 8 muscle chuck that has never been used. The lesson here is as I have said before don't itterate towards the right solution, it just cost more money and you can not predict the outcome, I did not foresee the Triton taking up smoking without any warning!
S

I may be getting a used Triton router that someone is discarding because it has stripped the gears in the lift mechanism, only just out of warranty and for them is not worth repairing but I just need the motor and nothing else so for me still usable.

Some additional info for anyone undertaking fitting lifts into a kreg table, in hindsight I would have been better just buying the Jessem kit because this would have made things easier, I now realise that the Kreg adjustment method may be awkward as it is done from beneath the table but it has a far greater adjustment range. Whilst waiting to get this router I have been looking at the leveling issue I have, there is a small lip that I need to address, the Jessem levelers cannot adjust this out as I had hoped for. The table top thickness is 27mm, the Jessem lifter plate is 9.5mm and the steel shim is 2mm and my hardwood infills are 15mm giving 0.5mm for final adjustment. This is a section through the setup, 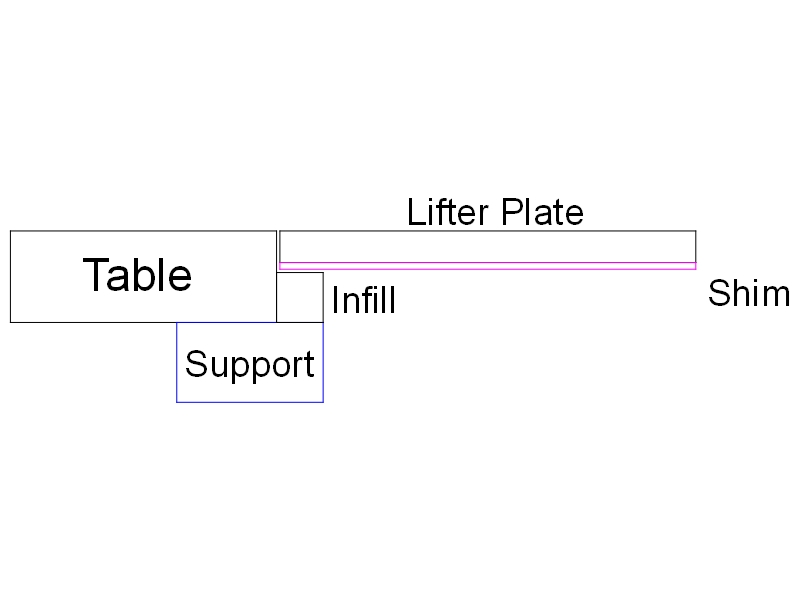 Looking at the 1/4 UNF grub screws that Jessem use for the leveling, they seem to bottom out with minimal protrusion, it looks like running a tap through these threads may be the answer, only problem is that I do not have any non metric taps so will need to source. Any other users of these lifts had any similar issues with these grub screws?
S

Last update hopefully. I have rebuilt the Triton router and left out all the old lift mechanism, handles, spindle lock and switch interlock so as it is just bare bones and essentially a motor. Now I am back to the leveling issue with that lip, I had to purchase a 1/4 28 UNF tap to clean out all the threads on the Jessem plate, some holes were tight due to anodising and others looked like they had not been fully taped as aluminium swarf was produced but now the grub screws no longer bottom out. I am now more convinced than ever that the Jessem fitting kit would have been the better option, and that the Kreg's method of plate leveling is in some circumstances superior to the Jessem/Incra method of grub screws. The reason is that with the grub screws you are limited because they must not protrude above the plate and you only have the 9.5mm of thread in the plate, with the Kreg or Jessem kit you have about 20mm of adjustment and no issues with protrusion above the plate. I believe the Jessem method is only for very fine adjustment, in other words designed to fit a precise aperture and just take out any small discrepancies whereas the Kreg adjusters allow for all synario's of which mine is one!

This has provided some very good knowledge for my new workbench that will have the router built in, but still to many niggles to proceed.

S
Anyone with issues leveling a Jessem lift