Hi All, ok these are obviously not woodworking tools buuuuuut I know there are plenty of folks on here with a plenty of knowledge, so can anybody tell me what they are?

A toolmakers clamp holding an assortment of dies for thread forming, would be my guess.
Adam.
S

Thanks Adam, I thought the clamp was far too obvious to note and it is really the specifics of the thread cutting bits I was after, I have dies but these are separate, square and numbered 1-7.
Are they for repairing a thread and what sort of holder would they need?
chris
A

Those two part dies were quite common in years past, think I still have some of my fathers in a draw. They fitted into a die stock that had a rectangular hole and an adjustment screw slid one adainst the other to get the right fit.

Not sure on teh numbering, its definately not BA as the thread on BA gets smaller as the number increases, possibly UNF/UNC which uses a number system on threads below 1/4" though mostly used even numbers

The toolmaker's clamp is a good one, and judging by the style of the lettering in 'Moore and Wright', oldish - say 1930's or thereabouts.

The threadcutting blocks are a puzzle. The numbers seem to refer to the block, rather than the thread, because there are seven numbered blocks and six threadforms. From the oxidation, and the style of the lettering, they are oldish as well, though how old I wouldn't like to hazard a guess. They look nicely made, and if the clamp holds them all without any dropping out, they have been very precisely made, so certainly not home-brewed.

The split-block style of die usually come in matched pairs of blocks, with a vee-groove on the side of the blocks in some cases so that they align precisely in the stock. The stock has a pressure screw that closes the dies. That allows the user to cut a thread in two or three passes (as anybody who has tried to cut a coarse thread with a die will tell you, that's very handy!), and to adjust the final size precisely to the threaded hole. That style passed out of use early in the 20th century, superceded by the much more accurate split (or solid) button dies - the round ones.

These are not 'matched pairs', they are a much more unusual 'matched set'. I'll guess that there used to be a special holder, now lost. It might be possible to determine what threads they cut by comparing them with known bolts or similar. Whitworth would be a good starting point, but that's just a guess.
B

The dies fit in a special holder, with a ring (for rotating via a finger) at one end, and a tightening wing nut at the other.

I think they're for brass.

And I can't find a single online reference, for some bizarre reason.

I've got one at home, and catalogues too. If I remember, I'll add more info tomorrow. 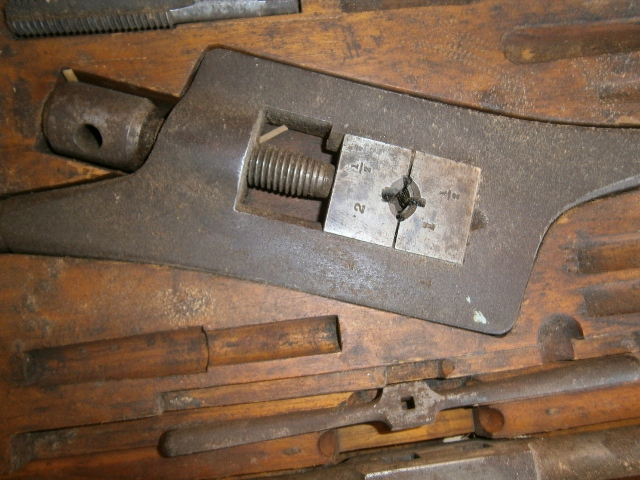 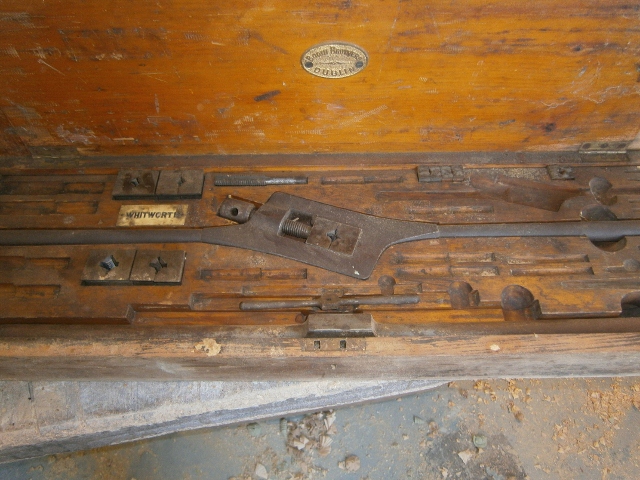 Thanks everybody, some great replies.
By coincidence i picked-up some old plumbers tools, at auction today, that includes some dies the same but much bigger.
again many thanks, chris
B

I think what you have is a sequence of dies from a tool like this.

K
What are these please?