This should be required watching for anybody working in wood

Nothing new, nothing special in that video, same way we did stuff in school In Dover back in the 60's
C

Well obviously Hennbury, you’re such an old dog, we can’t teach you any new tricks. But that doesn’t mean that it wasn’t very informative for a lot of people, judging by the thank you'se and likes I have received. I’ve been training and woodworking all my life and have now introduced one of of his methods to my bench. Aways open to new ideas. Ian

Cabinetman, I am an old dog for sure 66. I too have been woodworking all of my life, my father was a carpenter and joiner also, so I got an early start.
And when you show me something new I'll let you know. To show a video of someone using a hand plane, a workbench or choping a mortise like a million woodworkers have done everyday for centuries, and proclaiming it something special that everyone has to see is pretty lame, especially when he wasn't that good at it anyway. There are lots of awe inspiring woodworkers doing incredible stuff available for you to see if you really want to learn new stuff. Check out Chris Hall's blog "The carpentry way" He passed away a few months ago, but his wife is keeping his website operating.

Cabinetman said:
Or that strange crotch thing that sticks out at one end of his bench on the side?
Click to expand...

I think you missed the point Hennebury, it wasn’t the planing and sawing that was interesting it was his methods of holding the timber whilst he did it.

sometimewoodworker said:
it’s an end stop for holding vertical panels and will allow only 1 holdfast to do the job
Click to expand...

Yes I realise that, I was just trying to pique peoples interest to get them to watch the video. And that crutch was certainly new to me. Ian

I knew I had seen one somewhere, not an actual Anglepoise but still, and 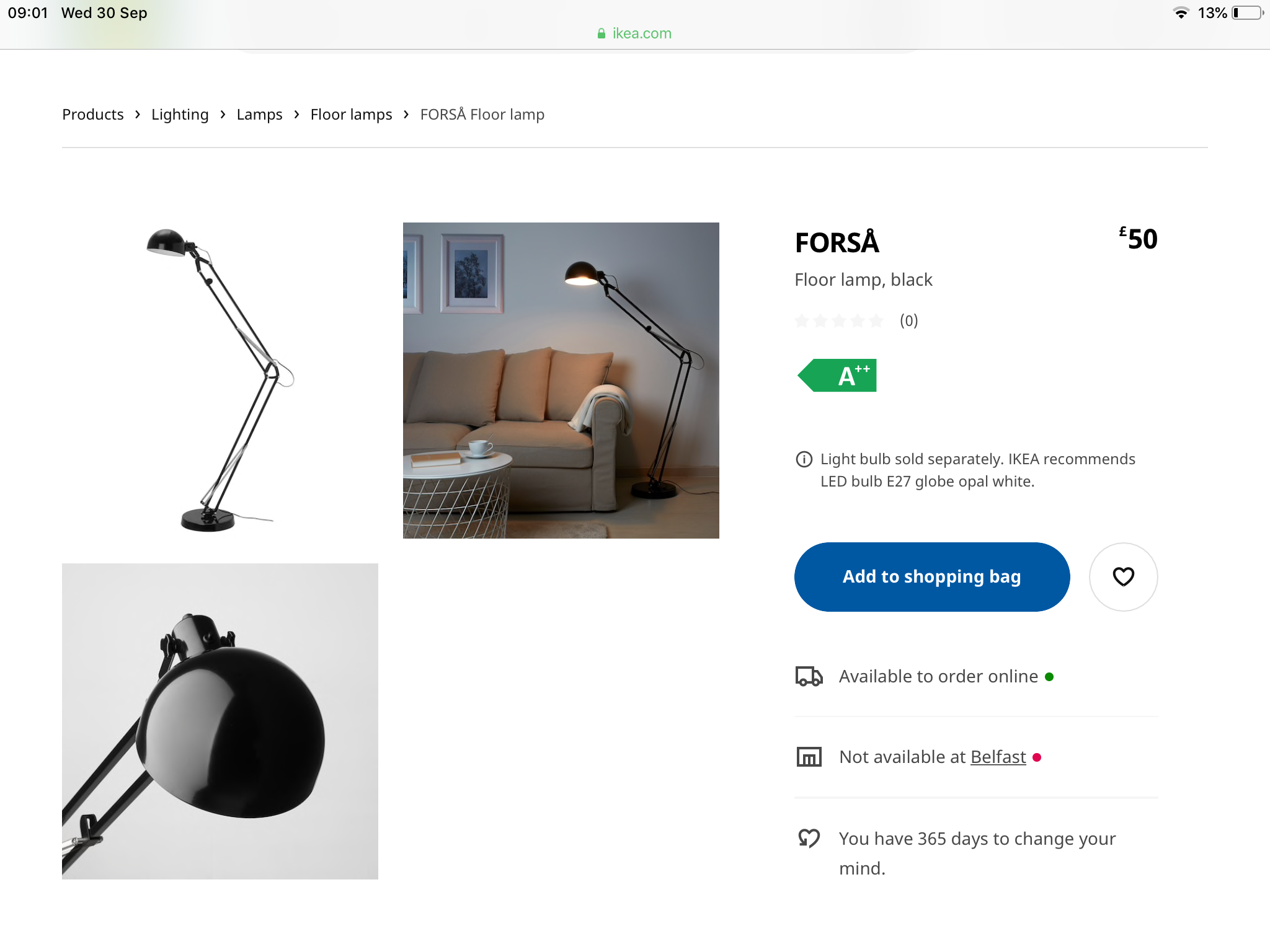 Thanks for your suggestions guys
I had a wee look again as someone else was looking for a lamp yesterday.
Still no results on the bay for the old style it seems, not in the buy it now category.
I have seen some nice used ones in the states, but the postage is prohibitive.

Not sure how I would get on with a floor standing lamp, my angle poise at the folks is mounted on an old satellite dish wall bracket, and often placed on a chair.
However it might be good approach if one happened to stumble across some stouter springs that might need a two handed approach.

For a giggle, have a look at the wee thing that I bought in good faith
It gave measurements that was close to the original sized ones.

Still on the look out for something about 10 or 20 quid max.
Frank, I might have to look at some if they are made in France.
Are there any brand names to look out for?

Don't know if I'm thinking with my tin foil hat on, but would it be a ridiculous
assumption to think that these might be considered dangerous by some pesky consumers safety organisation due to the EXPOSED WIRES!!!!!
that might get snagged or abraded by the arms.

I found my white one in a skip, and I don't recall it having an earth...
The wee thing from China didn't have one either.
Maybe this could be part of the issue?

Cabinetman said:
I think you missed the point Hennebury, it wasn’t the planing and sawing that was interesting it was his methods of holding the timber whilst he did it.

Yes I realise that, I was just trying to pique peoples interest to get them to watch the video. And that crutch was certainly new to me. Ian
Click to expand...

Cabinetman, I didn't miss your point, but you apparently missed mine; There was nothing wrong with the video, just a man using traditional tools and workholding methods planing wood. Nothing wrong with that, but nothing special either. If you liked it... great, if you learned something new... great, if you wanted to share it with others also great. The problem was with your title; promising way more that you delivered. If you don't want any negative feedback, try being a little less sensational and describe what the video actually is.
C

I’m ever so sorry you were disappointed with the video Mark, I do stand by the title as, (and as has been proved) it was most instructive for the rest of us obviously, very average people on here. I just hadn’t expected anybody to be so ........ no, the word escapes me.
Anyway, you’ll know what to do next time I offer some helpful information.
You must log in or register to reply here.
Share:
Facebook Twitter Reddit Pinterest Tumblr WhatsApp Email Link