Apologies if this has been covered before, i find the forums a bit tricky to search these days.

Just bought some snipes bills.
There’s a pair with vertical irons. Can anyone tell me why the irons are set this way?
Is it for lighter work so they act more like profiled scrapers?

Thanks in advance
Mark

Vertical irons and a left and right pair sound likely to be side rebates. A picture would help!
D

The pair with vertical irons is a pair of side snipes, rather than snipes bills. In effect, they work like traditional side rabbet planes, intended to widen and/or clean up shoulders of already established quirks. For that reason, they are intended to cut on the vertical side/face of the plane, and the irons should be skewed to allow for a fairly high angle of attack relative to that face. Needless to say, snipes bills are needed to first create the quirk/shoulder.

Ohhhh. Fantastic folks now you've steered me right I can see the cutting edge is on a different edge of the iron and intended for a different part of the moulding.
So the moulding is there just to register into the cut made by the snipes bill?

Andy, Don thanks very much.

edit: Don just seen your follow up, they are side snipes definitely.

These are Snipe's Bill planes, as made by the supremely talented Philly Planes. 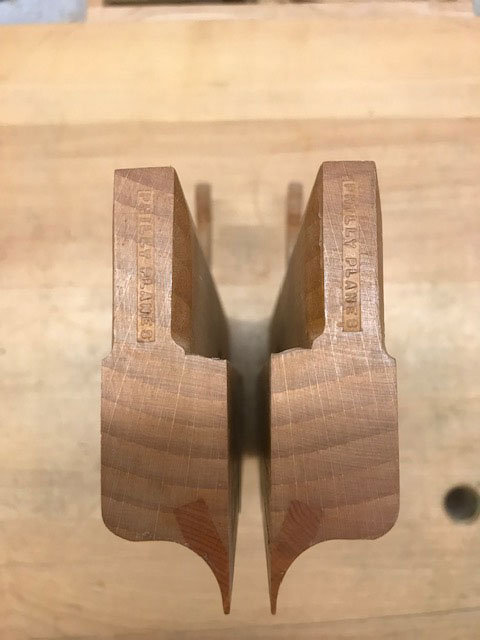 I guess they were originally designed for use with mouldings, but I find them useful for all sorts of jobs. Incidentally, it's quite tricky finding an old pair in good condition, they may look okay at first glance but the edge of the soles are so thin that they're prone to warping as well as chipping, so check carefully before buying.

Mein Gott, Custard, they are objects of great finesse and beauty!
D

"So the moulding is there just to register into the cut made by the snipes bill?"

In effect, yes, the profile of the side snipe allows it to register down into the quirk created by the snipes bill. Given the orientation of the iron and its cutting edge, the vertical cheek of the plane becomes, in effect, the sole of the plane and any cutting takes place laterally to clean up the shoulder, or sinking, of the quirk (and/or to widen it).

Some people have described the cutting action of a side snipe as a scraping cut. However, I think this actually depends on the skew of the iron and one's definition of a scraping cut. If the iron is skewed 30º from square, that results in an angle of attack of 60º relative to the cheek/sole of the plane, which is equivalent to half or cabinet pitch. So, if you consider half pitch to be a scraping cut, then that also applies to a side snipe. If not ... .

Peter Nicholson, in his Mechanic's Companion, uses the terms "sinking snipes bills" and "side snipes bills" which, I believe, helps distinguish the differing functions of the two types of snipes bill planes. With the increased interest in snipes bill planes over the past ten years or so, it is helpful to be aware that there are two types of planes in this category and understand their differing functions. So I'm glad you asked about your side snipes. It's been a bit distressing to learn of a handful of occasions where tool dealers have sold customers side snipe planes when they were in the market for snipes bill planes. Needless to say, this has led to a great deal of frustration when/if the customer tries to use them.

Incidentally, in our "study collection" we have a single snipes bill plane which has a wooden depth stop. Initially, I'd been inclined to think this might be unique to this plane, but we have since found a couple of mentions of snipes bill planes "with slide" (sliding depth stops), in older plane makers price lists. So, while quite uncommon, the use of a depth stop with (sinking) snipes bill planes, apparently, isn't unique to our plane. I'm attaching a photo of it in case anyone is interested.

Dan , that's a most interesting plane. Who is the maker ? I was also taken by what appears to be your oak workbench, am I right ? I was beginning to think I was the only person in the universe who had an oak workbench !!

The snipes bill plane appears to be made by Saxon. At least, that is the stamp which appears where a maker's mark would typically be found. However, that name is not found in Goodman (British) or Pollaks (U.S.) books. So it is something of a mystery.

The iron has two stamps, but, unfortunately, neither is legible enough to determine its maker or locale. So that's not much help. For what it's worth, the boxing (part of which is missing at the toe) appears to be something more akin to rosewood than boxwood.

If anyone has any thoughts/information, I'd be very interested to hear from them. I'm attaching a photo of the toe of the plane.

Yes, the workbench is oak - and I work at the bench every day. The oak was chosen because it was suitable for the task and was already on hand (left from a previous project). The benches have served us well for plane making.