I'm new to woodworking and the forum, having recently done a basic course at a local community centre. I've purchased some old tools to restore, including a tenon saw. On dismantling it (after much battling with the saw nuts!) I've found the holes in the blade look like they have been redrilled or enlarged somehow, and this was the cause of play between handle and blade. Photo attached, which shows it better than I can explain. 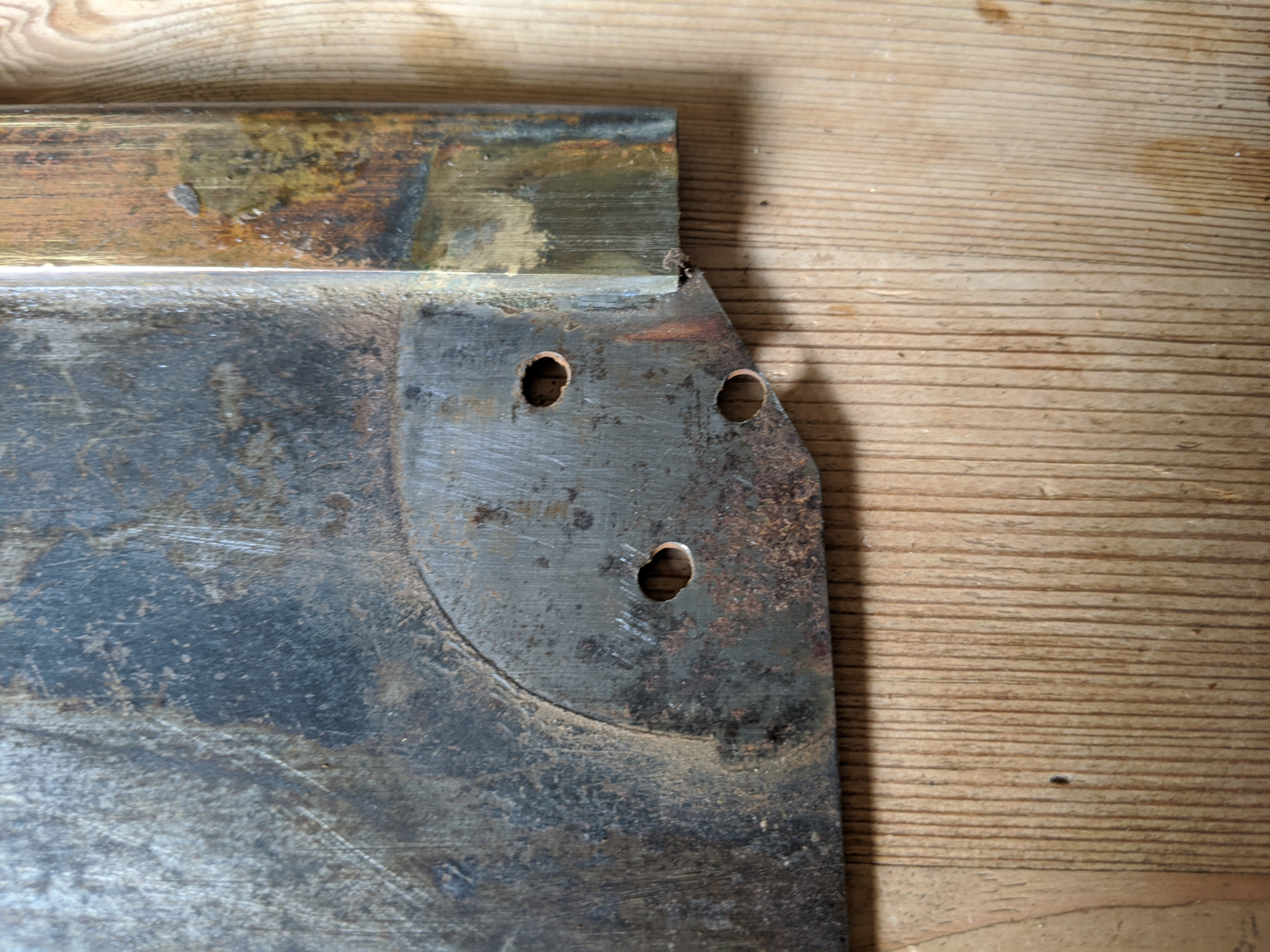 Any advice on how to proceed? Is this salvageable for someone with only basic woodworking skills?

Are you making a new handle, Ben? If so, then it's no issue. If there is slop in the old one and the nuts were doing up tight, then you've got an issue.

Hi - I made a new handle for a saw last year and found this a useful source of information on how to do it. It isn’t that difficult.

If the fittings need replacing Workshop Heaven is a good place to look.

make sure that the saw nuts that you get have some bite. You may want to linseed oil the handle when you install it, too (inside the slot) - something that will have some tack when it dries - give yourself whatever advantage you can get.

If you are purely after a useable saw and eliminating movement in the plate... decide on a metric thread just slightly bigger than the holes. Eg. 5mm. Drill out the handle holes in two stages. 5mm all the way through for the thread and a bigger partial hole with forstner bit either side to house the bolt head and nut.
House the plate and redrill.
Won't be pretty but it would work.
Is the spine of the saw replaceable or fixed? If not and of little value then all you have lost is the old look of the saw and gained a proper user.
B

Thanks for all the advice!

I hadn't planned to replace the handle, but perhaps that's the way to go - it's a nice old saw (R. Groves) and the project looks like it could be a good one for isolation times. I suppose I'd just need to make sure the new design has enough space for the nuts to be positioned away from the existing holes.

Now I just need to try and get hold of some decent wood with all the shops closed!

No, no, that's not necessary. For a start, your new saw nuts might well fill the holes anyway. Secondly, you just position the nuts at the extremities of the holes (ie top of the top hole, bottom of the bottom hole)......but thirdly and most importantly, it's the squeeze of the nuts on the wood on the plate which holds everything tight, not a tight fit of the holes in the plate around barrel of the nuts. For this reason be precise in your cutting of the slot in your new handle. Here's how I did it for one of the many saws I've rehandled recently.
L

Following what Mike has said.
Use a pair of scissors to cut open a coke can (other drinks are available)and create two flat shims for either side of the blade.
Will this make the blade tight in the handle slot?
The excess shim can be trimmed away from the edge of the handle with a craft knife after tightening the saw nuts.
I

As MikeG says, the pressure of the cheeks of the handle can usually hold a saw blade firmly enough for normal use. There are few things more annoying than a loose saw blade! Frequently, you can't tighten the bolts enough because crushing of the wood over time, with many moisture cycles & frequent twitch-ups, has used up the 'spare' thread on the bolt (which is usually barely enough when the handle is new). If you have an appropriate die nut you can extend the thread a bit for the open split-nut type and that might be an easy solution to your problem. If you have the later barrel nuts and they are "bottoming out", you can sometimes get a bit more travel by filing a bit off the tip of the bolt. (By the way, when did the current convention of calling the whole retainer a "sawnut" arise? I think there is still value in discriminating between the nut & the bolt).

If you like the old handle and it is undamaged, but you can't get it tight with the existing bolts I'd suggest some new bolts might be the next best solution rather than starting from scratch. Of course if you want to make a new handle, it's a fun thing to do.

Tightening the bolts can sometimes cause a kink in the end of the blade, usually caused by a slight mismatch between spine & blade slot. I find this really common on old saws. Fortunately, it is only the very end & not a part of the blade that is used, so generally causes no bother. Kinks in the blade due to bent spines or uneven spine pressure, are a concern, & do need to be addressed.

Hoping to increase grip on my slightly loose 14 inch back saw. Problem is split nuts have been ground smooth. Any suggestions to loosen and replace?

If you are replacing the nuts you could drill a shallow hole and, using small punch that will fit the hole, try tapping the nut , or, if you have a pair of circlip pliers, drill two holes and see if you can remove it that way.

I had a bicycle spanner years ago that had two short pegs at one end that fitted into, for want of a better word, a nut on the pedal crank shaft. It would be possible to make up something like that to correspond with two holes that you could drill in the saw nuts. Drill the holes in the "spanner" to take a nail or small metal peg, but before you fit the pegs drill two holes in the saw nuts. That way it should fit all the nuts.

Nigel Burden said:
If you are replacing the nuts you could drill a shallow hole and, using small punch that will fit the hole, try tapping the nut , or, if you have a pair of circlip pliers, drill two holes and see if you can remove it that way.

I had a bicycle spanner years ago that had two short pegs at one end that fitted into, for want of a better word, a nut on the pedal crank shaft. It would be possible to make up something like that to correspond with two holes that you could drill in the saw nuts. Drill the holes in the "spanner" to take a nail or small metal peg, but before you fit the pegs drill two holes in the saw nuts. That way it should fit all the nuts.

Thanks - I know the spanners that you mean and I do have circlip pliers. I'll try to drill a couple of holes and try it.
I

FifeMike said:
Hoping to increase grip on my slightly loose 14 inch back saw. Problem is split nuts have been ground smooth. Any suggestions to loosen and replace?
Click to expand...

Mike, reduced slot depth in split nuts is a pretty common problem, the bolt heads & nuts were sanded in the factory to smooth them to the sides, & many get further attention from "restorers" later in the saw's life. However, I don't recall ever seeing the slots totally removed like yours have been! Another relatively common problem is that the slots are "stripped" due to someone struggling to remove &/or tighten them with an inappropriate tool. It's usually fairly easy to get the nuts to move with a small punch ground to a chisel point (a nail will do, it doesn't need to be very hard metal), placed at the periphery of the nut & tapped in an anti-clockwise direction. On all the nuts I've removed, there was enough of a lip left on at least one side of the damaged slots to catch the punch, but you'll need to make a decent indentation on yours. The threads are quite coarse on these old bolts and it usually only takes a quarter rotation or less to loosen it enough to come off easily. Careful use of a punch should do minimal damage, and you can cut the new slot through any indentation left by the punch. The more drastic move of drilling a hole or two as suggested by Nigel would be my next recourse if I couldn't budge them with the punch, but the punch usually does the trick.

Re-using the nuts may be feasible, I often make the slots on old nuts a little deeper before reassembly (a regular hacksaw blade gives a slot of reasonable width), but it looks like a god deal of the thickness of the nuts has been lost from yours & they may now be too thin to cut a deep enough slot to be of practical use.

You may be able to find replacement nuts, or find someone who can make you a set. They are very simple things to make, if you can locate a tap that matches the existing thread, but good luck on that score, it sure as heck isn't any 'standard' thread on any I've seen. I've had to replace a few broken or stripped bolts in my time, and the best course for a "user" is to make a new bolt & nut using one of the standard modern sizes & threads; this style of bolt & nut is a trivial exercise for anyone with a metal lathe.
Cheers,
Ian
N

I bought these nuts and screws from Dieter Schmidt Fine Tools. Not the cheapest, but the best that I could find. 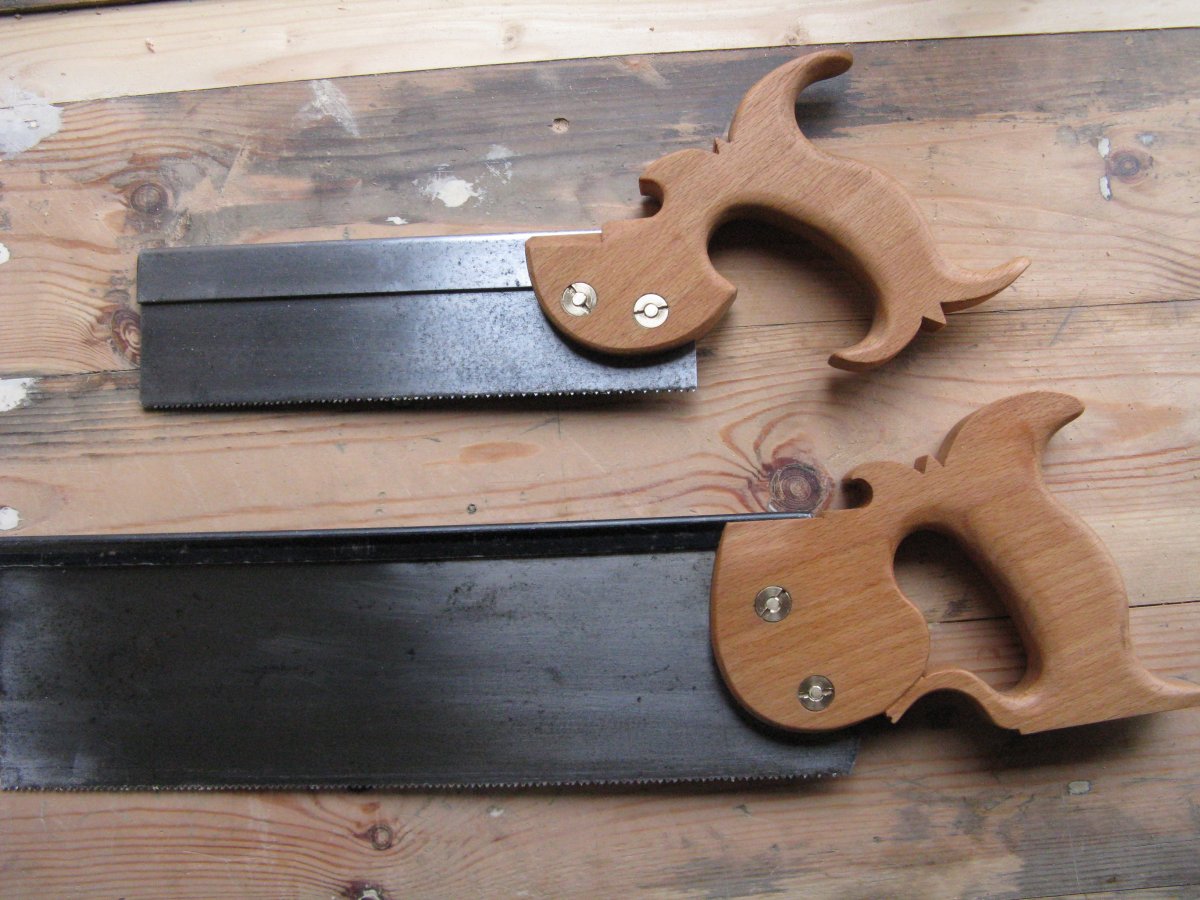 I'd slip some thin ca between the handle and plate with a very fine ca tip.

Please don't anyone tell me that'll look bad if advocating mashing up the nuts on the saw.
D

Nigel Burden said:
I bought these nuts and screws from Dieter Schmidt Fine Tools. Not the cheapest, but the best that I could find.

Thomas Flinn in Sheffield have split nuts at less than half cost of those from Dieter. Don't know about quality but they look up to the job.
Regards
Doug
B