I've been without a proper dining table for several years, making do with an old and small, octagonal, mahogany table that always stood in my grandparents' window with a vase of flowers on it. It's fine for one, OK for two but too cosy for comfort with any more.

I've had a design in my head for quite a while, but had never got round to realising it. 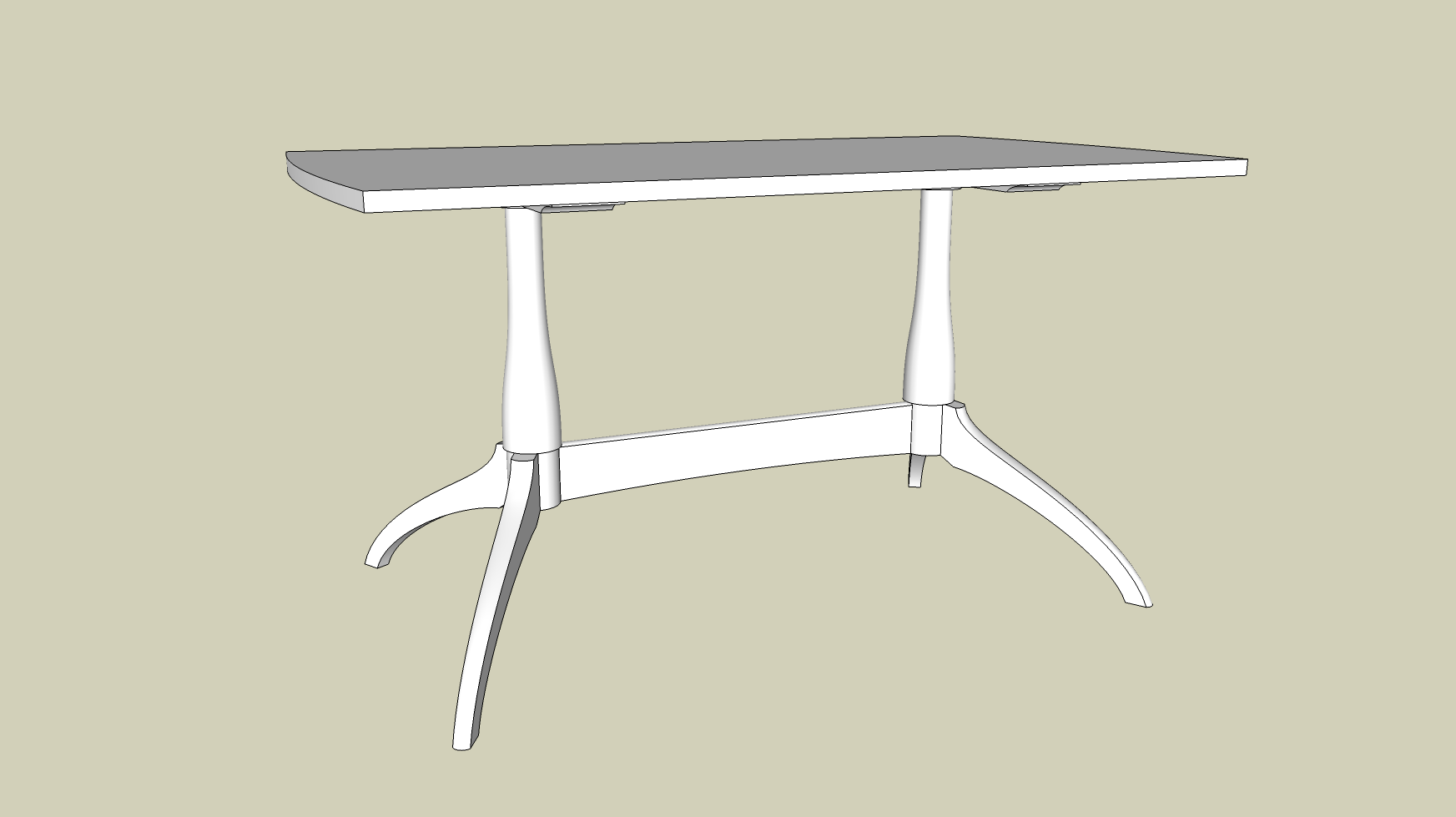 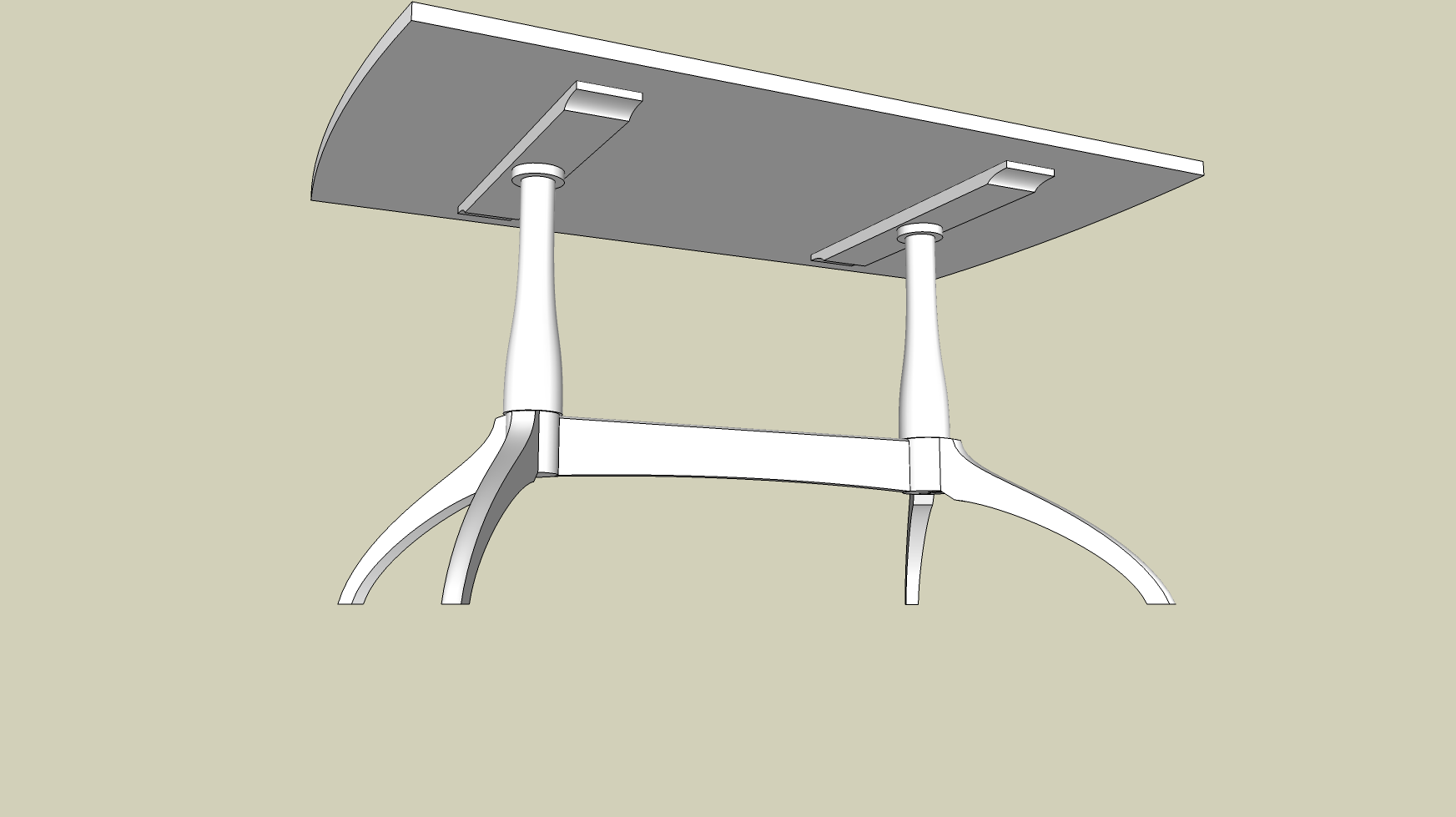 Last year I saw a table top for sale. Nice pippy oak, too big for my needs, but, I thought, it would save me some work preparing large boards with my small machines. So I bought it.

Big, big mistake. It was badly jointed, slathered in a horrible poly finish, patched in a couple of places and very, very cupped. It also arrived damaged. Nothing that would affect me, but it's an indication of the situation. It was going to be more work in putting this right that buying virgin timber. Plus, I paid far too much money for it. Ah well, we live and learn.

The good news is that it is very pretty.

So the first task was to cut down the centre, to see where the Dominoes were, and therefore where it was, and was not, safe to crosscut. I could get a nice, quite well-balanced top, 1400mm long.

The next task was to straighten up the balance of the grain. The two boards were quite well balanced at one end 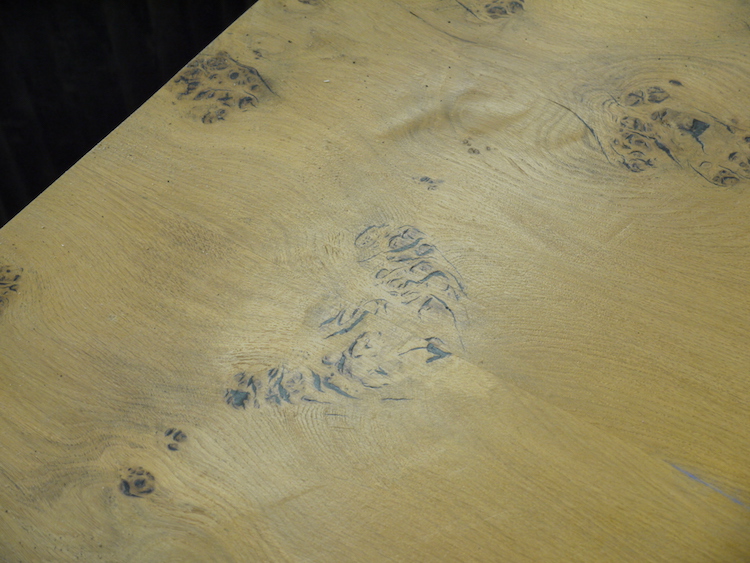 but miles out at the other. 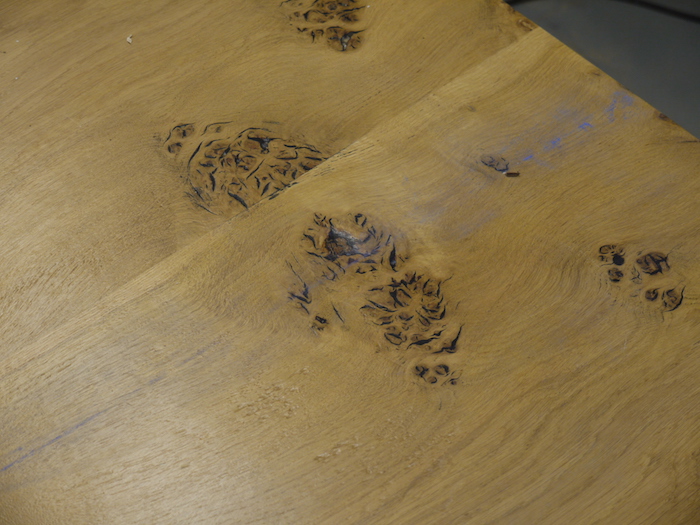 So I cut out a long thin triangle to bring the two haves more into balance. 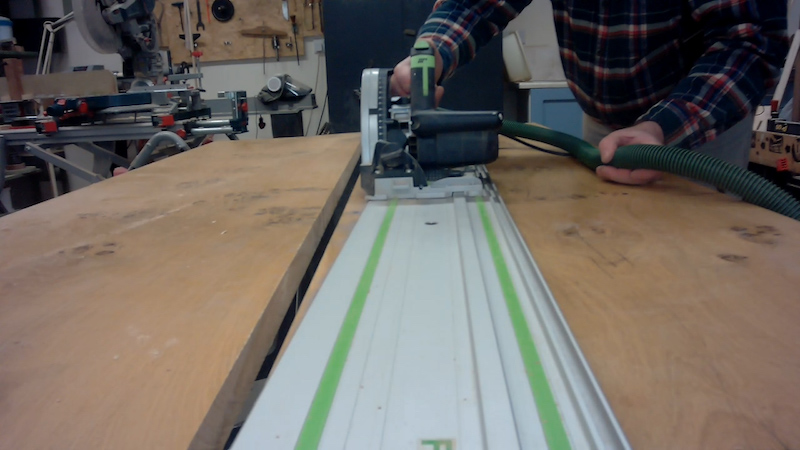 I could now see that I could get a top slightly over 800mm wide.

All this cutting was done with my tracksaw swapping between rip and cross-cut blades as necessary. Good job it has a FastFix feature, it really is a quick job and stops me from thinking that it's not worth changing the blade again just for one cut. I ended up with two decently-matched boards 1400 x 400mm. 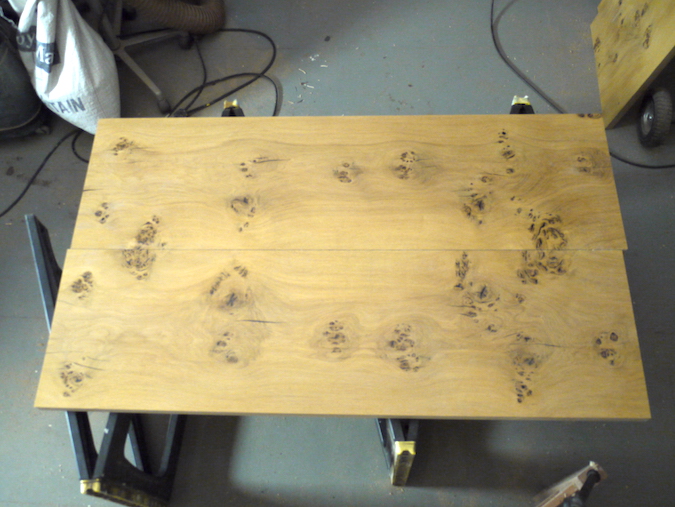 However, they were still far from flat. I do have a drum sander, but it is not up to the task of handling boards of this size. To cut a long story short, I rang my woody pal Andy and asked if I could use his big drum sander and he very kindly agreed to help me out. If you are reading this, Andy, thank you very much indeed. 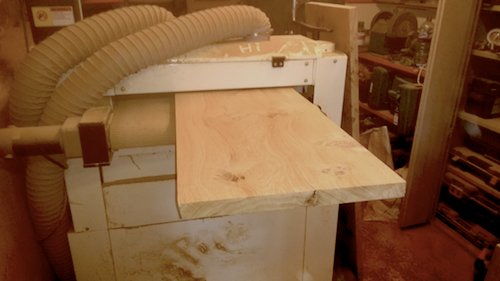 It took two of us two hours to get them flat and uniform. The bad news is that we have removed 4mm of wood (down from 32mm to 28mm – still a generous thickness for a table top), but one board has become slightly more heavily pippied (is that even a word?) than it was, while the other has got a bit less pippy than it was, so the contrast between the two halves has increased.

There are a couple of places where there is a very large difference in figure between the two boards. One I can't do anything about, the other I can. More tomorrow.

cracking figure on the top
G

Beautiful figuring on that timber and you've done a fabulous job of matching up the pippiness
Is there anyone else who is concerned about the huge stress on the two joints on either end between the vertical pieces and the splayed legs? I cannot see how that joint won't be under huge stress all the time?? Just my ha'penyworth and hope I'm wrong
BW Mark

That is an important consideration, certainly. It will be a gert big sliding dovetail. I might make the feet a tad more vertical.
Three-legged Shaker tables sometimes had a metal plate under the column holding the three dovetails together. That is another possibility.

I'll be watching this one closely. It looks an interesting project.

But Shaker? I mean "Shaker" gets added to all sorts of simple panel work as though no-one else ever did panels, but I've never seen "Shaker" added to such an ornate table leg arrangement as that. Shaker furniture was all about stripped back simplicity. I may well be wrong, but if anyone can post an image of a genuine Shaker table that looks anything like this I'll be mightily surprised.

Back in September I went on holiday to Maine, USA. We visited a Thomas Moser shop. There was a massive (12-seater) extending dining table in cherry. The ends were flat like a refectory table, rather than tripodic(?), and they were 3 peices joined in a Y shape. I assume there were splines inside, or big tenons.
The shape is very similar, a modern interpretation of classic Shaker. 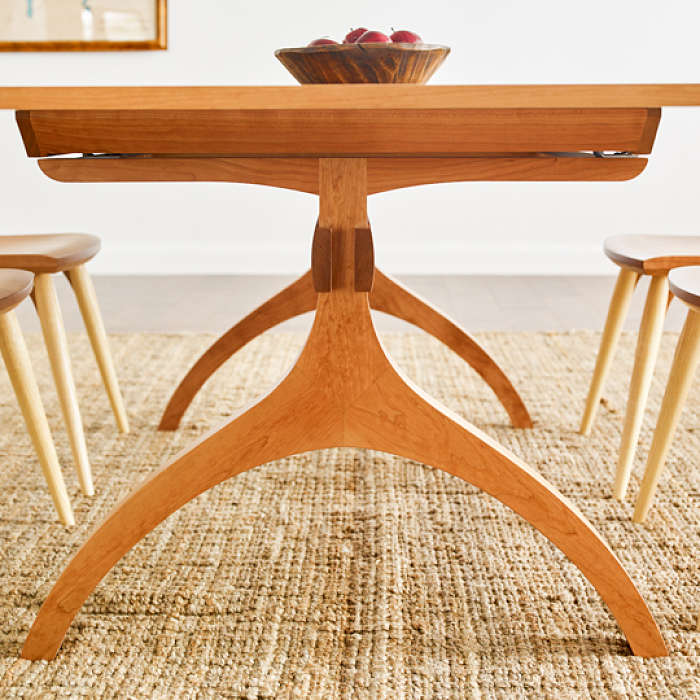 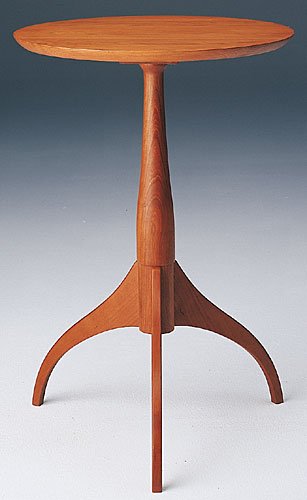 That's an interesting development of a shaker table known (as I'm sure you know) as a candle stand.
Thing is they were quite small round tables about 450 diameter and were constructed as per your drawing. Do you not think the stresses imposed on a larger table would require further support under the top though? The joint between the top of the column and the cross piece looks very vulnerable
The sliding dovetails that are used between the feet and the column? Maybe OK if scaled up appropriately... they did often put a metal plate on the bottom of these but my guess is that that was to back up the glue or no glue. Not sure that it added much strength.

I saw an advert for a Shaker Bar Stool once! They'll be making Shaker condoms next...

That would work":3lcao150 said:
The joint between the top of the column and the cross piece looks very vulnerable
Click to expand...

It's a spiggot 40mm dia and 30mm long. I could make it longer by beefing up the cross-piece in the centre (anyone know what that part is called?).

Interesting design and thought processes. I shall follow closely.

On the way that the pippiness increased and decreased, I think it's clear in retrospect. Your two boards are bookmatched, so their surfaces would have been together in the log. If you imagine the knots are roughly conical, removing wood from the upper board takes the surface up to a thinner part of the cones, so they dominate less. On the lower board, sanding takes you down to where the knots are thicker and make a higher proportion of the area.
T

Yep on the small round tables it was indeed a through round tenon into the cross member and wedged.
I recon you'll need something more substantial though considering the leverage from the edge of the top.

That is exactly what has happened, Andy.

I always get a bit worried when people describe something as "interesting"...

Seriously, Steve, I'm worried about every aspect of the design of the undercarriage of this table. I simply don't see it being strong enough. The first person who leans on it to push themselves up out of their chair is going to wreck it. But don't take my word for it.......drill a tight fitting hole for a dowel into the middle of an offcut the same width as your table, glue in the dowel, and when it's dry clamp the dowel in a vice with the offcut sticking out. Apply some force to the end of the piece of wood and see how much it moves.

If you beef up that top joint with some brackets, for instance, all the forces from someone leaning on the table edge are going to end up in that sliding dovetail in the long grain of the leg. What's that going to be like in 5 or 10 years time?

I have often wondered why early designs of small single column tables adopted the bird cage pattern - perhaps it was to deal with tilting forces between the column and the brace.
T

I would be thinking about leaving a length of square on the tops of the columns to allow for an edge upwards piece that could be bridled into the top of the column. Or maybe two pieces housed onto the sides of the columns. Bridle is tidier I guess.

You are all getting me worried now - which, if I am wrong, is a good thing.

AJB Temple":2p7wrwdl said:
I have often wondered why early designs of small single column tables adopted the bird cage pattern - perhaps it was to deal with tilting forces between the column and the brace.
Click to expand...

Have you got a picture, please?
J

If i really wanted :roll: to do a big heavy table based on the delicate little Shaker 3 legged round table I'd simply drop the board on to two 3 legged similar, and get rid of the clumsy stretcher. You'd have 6 legs but a more logical and stable structure. You'd still need to think about the top joint, possible metal, or 3 brackets to match the three legs?
I've seen similar in principle, where a heavy top is rested on two saw-horse type of thing, each with three legs and inherently stable.
T

Look at this 'Hancock' bench. A simple shaker piece which use braces under the seat, going in a different direction true, but something similar would fit in to the style of your table.

That would work":3sek26oa said:
Look at this 'Hancock' bench. A simple shaker piece which use braces under the seat, going in a different direction true, but something similar would fit in to the style of your table.
Click to expand...

The trouble with that is that I really don't like it.