Is this 3 phase or single phase?

Hi, i’m looking at a thicknesser for sale about an hour from me, but not sure if its single phase or 3 phase. The guy selling isnt sure as its stuff from a late relative’s workshop. Based on his description and on these photos it appears to be wired directly to a consumer unit or some kind. Would this be useable in my single phase workshop? 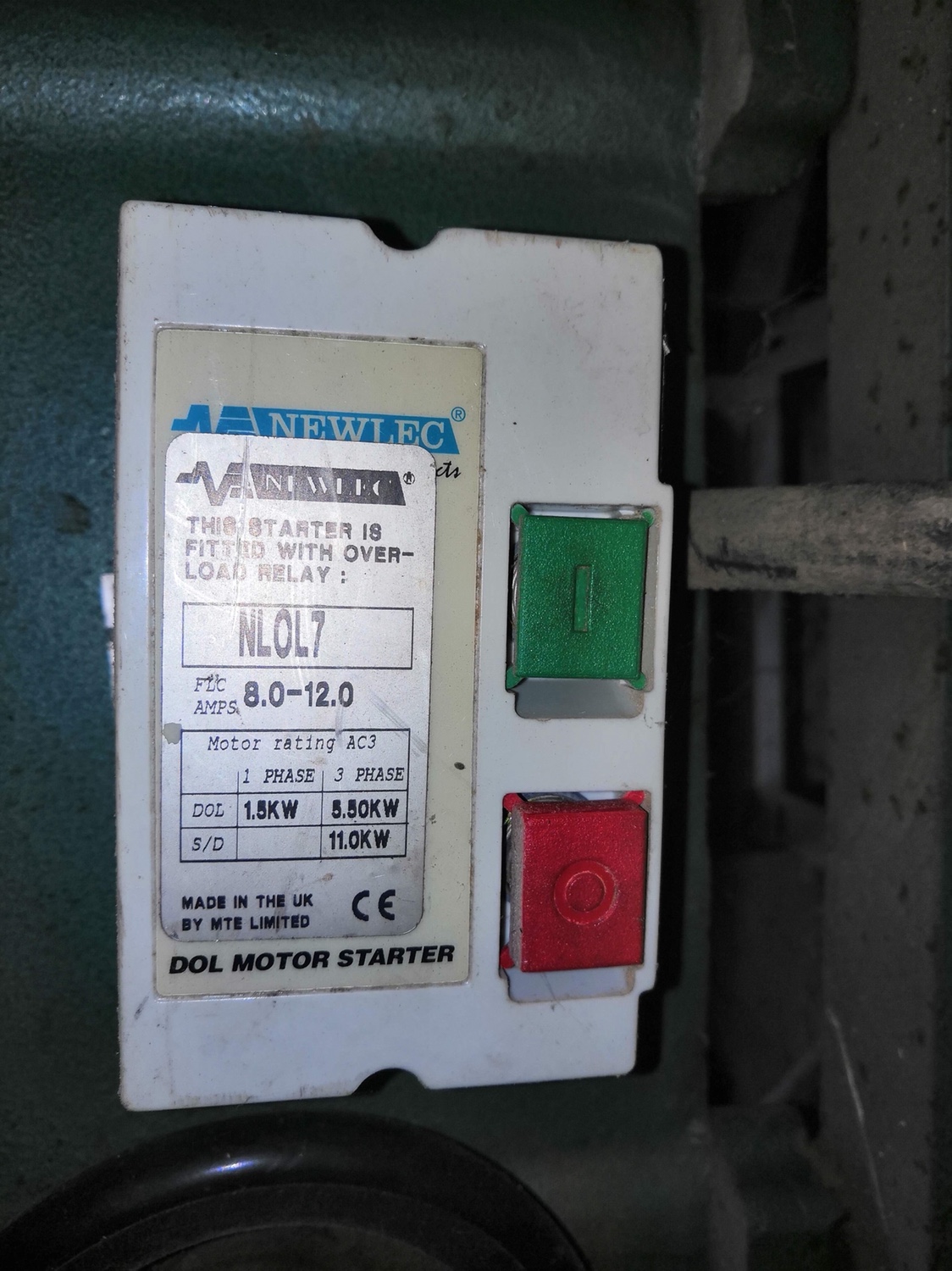 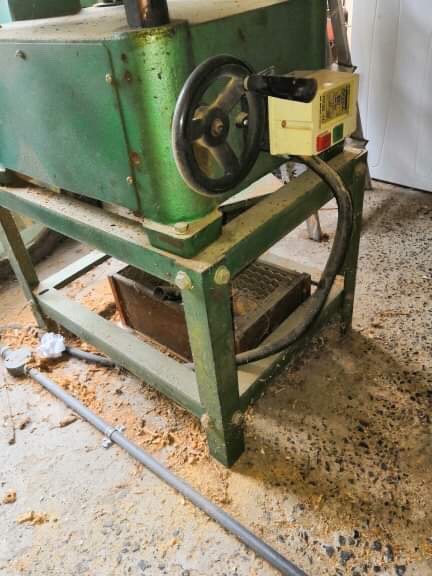 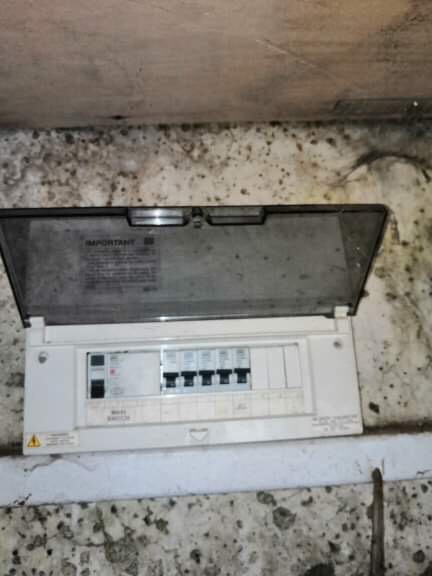 He says there's no plug and the cable goes directly from the machine into metal trunking and directly into the consumer unit. The cable looks the thickness of 3 phase, but the starter states info on single phase, so i'm not sure

From the photos I would guess a single phase but wired directly into CU. My guess based on the fact that you can't tell from the DOL because these can be configured as either single phase or 3 phase. The CU looks like a standard domestic single phase box so if it's wired directly into there it is getting a single phase supply.
Can't be 100 per cent as I am making assumptions. There could for example be some capacitors somewhere making a crude 2 phase type supply that I can't see. If you can get a view of the motor plate that will tell you or whip a cover off to see how many wires there are.

The switch can be wired for either single or three phase. There is no way to tell from it what has been done and Porker's suggestion of looking at the motor's data plate is the best thing to do. Even if it is a 3 phase, as long as the motor can be wired to 220 Delta you can get a Variable Frequency Drive (VFD) to run the planer on single phase power. There are good Asian imports that you should be able to get for approximately a hundred pounds or so.

I too would guess it's single phase. As porker says, the DOL can be either, but for the 3-phase configuration it's rated for a 5.5kW motor - which is far to large for a saw of this size (but it could have the wrong size DOL).
The other clue is that there don't appear to be three connected breakers in the consumer unit as there should be for a 3-phase circuit (but again it could be fitted with the wrong breakers).

Does the cable go into that conduit on the floor ? If so, simply unscrew that cover (red arrow) and count the wires. 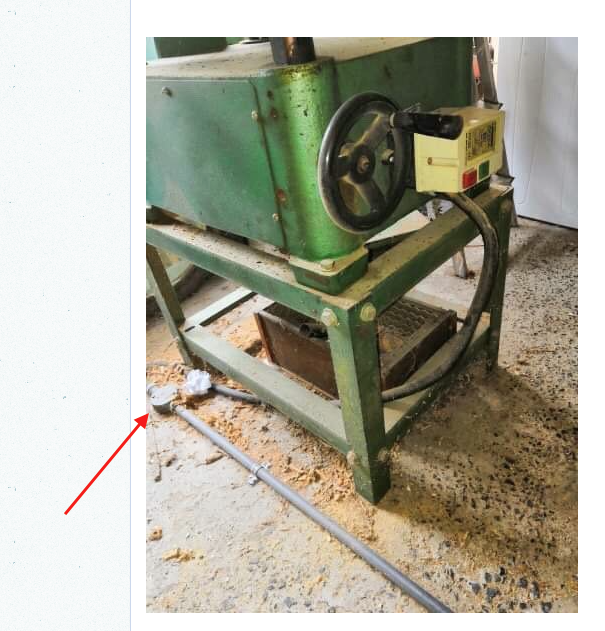 My money is on single-phase.

I've just seen the listing while browsing , according to it it says "All single phase". Never heard of Alpine machines (might be some generic name slapped on Taiwanese machines like the Nutool) but looks stout enough. I would say it's single phase just by looking at all the other kit in the room but you could only really 100% know if you check the motor plate.

Unless you've already got one I would suggest picking up the surface planer too, it's a little gem of a machine.

Thanks all for the replies. I’ve asked the bloke to take photos of the motor plate, so he’s going to get back to me tomorrow. I know he said its all single phase, but he said he doesnt really have a clue as he’s not a woodworker. If it is more than likely a single phase machine i’ll try to go see it (so long as i can sweet talk the OH!). I already have an axminster planer thicknesser, but increasing the width capacity from 240mm to 380mm with the thicknesser would be a lovely bonus!

My best guess is that this machine can be connected with either 3 or single phase. Like others have said, the number of live cables connected will provide the answer but the consumer unit has 5 breakers which would fit for 3 phase (3x live, 1x earth, 1x neutral)
I have 3 phase in my house and only the boiler is connected to all 3 phases. The rest of the house is on single phase radial circuits. I recently replaced the kitchen and the oven was 3 phase and wired directly into the consumer unit and had a very similar plate to the one in your picture.

I have to ask since when does Earth (ground here) have a breaker? Neutral doesn't have a breaker on this side of the pond either. If that's how you guys do it I'd be dumbfounded.

I have to ask since when does Earth (ground here) have a breaker? Neutral doesn't have a breaker on this side of the pond either. If that's how you guys do it I'd be dumbfounded.
Click to expand...

#-o Quite right of course. I obviously only had part of my brain engaged.

It looks like it would be possibly easy to stick a mirror, or even ones head under the machine, to look for the presence or absence of a capacitor, incase the seller can't read the motor nameplate....
But what if the machine has two motors, like is the case with many planer thicknessers?

The real question here is how would you disconnect it safely...
I've never messed with consumer units, and kind of frightened of even looking at them.
I'm guessing you could bring a torch, multimeter, or phase tester that works, a three phase plug, and a 16a single phase one, a 13a just on the off chance that the wire is very thin.
Knock everything off, and you just stick a plug onto the end of the wire?

I still would be wary of doing this, even though it sounds like it could make sense, I don't trust CU's,
and I don't know anything bout electrickery.
About a year ago, our electrical technician was doing some work on the meter.
I didn't watch what he was at through the window, as I don't like to pester folks working, but I did see him do something with at least a 10 foot plastic pipe, :shock:
Presuming he was shutting off some kind of lever or switch, nothing happened but it looked scary.

Sorry I am of no help, but have seen folks mention here that one VFD can power two motors for a PT, it might have been a custom drive,
I don't think it was explained, or if it was, I didn't understand it.
Tom

I have to ask since when does Earth (ground here) have a breaker? Neutral doesn't have a breaker on this side of the pond either. If that's how you guys do it I'd be dumbfounded.

Yes, you're right, apologies for my brain fart.

Vann, combined breakers are not always fitted. Mine doesn't have one for my boiler and that was installed by a proper electrician.
S

That consumer unit is single phase, three phase breakers are noticably wider and not arranged horizontally in a row, they are grouped in two colombs vertically. Without knowing the whole layout is that machine wired into that board or could there be another board elsewhere?
You must log in or register to reply here.