Found this by accident in Tesco - a brass-bristle barbeque cleaner. It's Tesco own-brand and I think it was about £3.
Brilliant for cleaning files and also rasps. I find the card-type brushes a bit aggressive sometimes, due to the very short bristles.
This one is all-brass (tested with a magnet) and fine enough to deal with fine files, but also excellent on rasps.
(It would be easy to remove the scraper blade.)
Works very well indeed - the test on a fairly fine file is the particles of aluminium that get stuck firmly in the teeth - it removes those well. 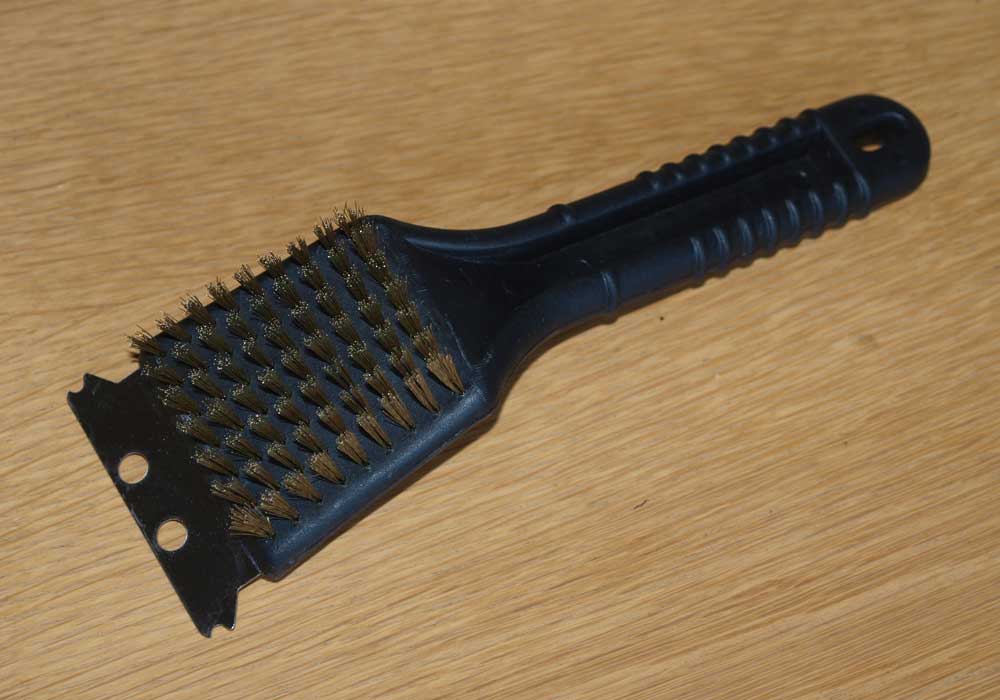 A very good find and tip Douglas. My file card bites me sometimes.

For cleaning rasps, I've found that a cheap nail-brush works quite well. Mine came from one of the supermarkets, I think. For cleaning files after metalworking activities, there is a thing called a 'file card' sold for the purpose - it's a flexible backing with lots of hard steel wires about 1/2" long protruding from it. I think they're best avoided, because the wires are dead hard and inclined to damage file teeth a bit. The brass bristle brush would be a much better option, supplemented if needs be by a strip of soft brass pushed across the file, parallel with it's lines of teeth, to dig out any bits that have stuck firmly. Three or four strokes of this brass strip (something like 1/2" x 1/8" would be perfect, but use what you've got) cuts grooves on the end of the brass and lets it get right into the gullets between the teeth.

There's an old fitter's trick to cut down the chances of 'pinning' on files (hard bits of swarf getting stuck in the teeth and putting scratches on the job), and that's to rub the teeth with a piece of chalk before starting, and occasionally as work proceeds. Works reasonably well, but you end up with chalk dust all over the place.

They aren't so popular round here mind...

unless that's a crowd of very keen woodworkers who want their brushes NOW!!

(I think Tesco is the only supermarket I've regularly found mouldy fruit out on the shelves in.)

We got a very similar thing from either Asda, Co-Op or Sainsbury's, though (I forget which, we don't have much loyalty), I imagine you can find them all over.

Second thoughts most of them seem to be more expensive with the P&P, depending on how much it costs to go to the supermarket!

I use a suede brush - also brass bristles, but probably not as tough as the one for barbecues. It's handy for cleaning planes and router cutters, etc. too. I think the barbecue one might be a bit better though.

E.
(we've boycotted Tesco since they built on Golden Hill playing fields in Bristol - around 20 years ago.)
You must log in or register to reply here.

I
A labour of love - restoring old woodblock parquet
2