Shutting down early this year, so here are eight pieces of Black walnut prepared. 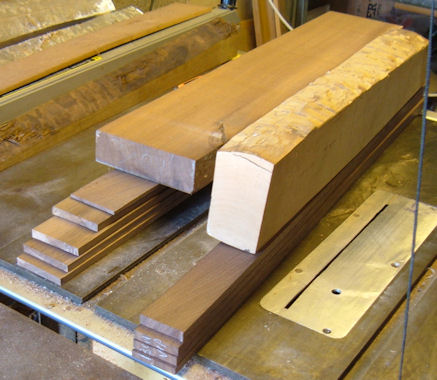 Is it getting cold down there already John ?

I have noticed a big differance in the weather. My pinkies have started to blanch already. Does the cold affect your arthritis john?
mark
D

I have a cataract op. booked for 21 days time, and the rules are no lifting weights etc. for a while, neither would I want to remove dust from my eyes!

Arthritis is non seasonal for me, just holding on a clamp makes me want to use masking tape instead.
G

I trust your op will go well John.
I am also beginning to get arthritis in my hands but it seems to be worse in warm dry weather which surprises me.
C

Hope your op goes well John and look forward to seeing your work again in due course.
J

Hope all goes well with your op John and looking forward to seeing your boxes again.
B

devonwoody,
I had both my eyes done 2yrs ago and it went very simply...the strangest part was getting to tolerate the operating theatre whilst still awake.....and keep my eyes still until anaethetised. Its not painful until you try to wipe your eyes so don't do it.....enjoy the benefits afterwards

Yes all the best with it all.
D

What a shocker, watch this.

A piece of black walnut put to the tablesaw and wanting to divide so that a contrast strip can be put to the centre of the board plus additional strips top and bottom edges.

It turned into a banana.

This timber was prepared the day before and the strip you have looked at was cut through the thickness of the board which was 55mm thick. Four pieces were cut from the plank this way and four more were cut across the remainder of the plank horizontally, making eight pieces in all for 8 boxes. The boards cut horizontally have fared no better they do not lie flat.

So that first cut is wasted but the second and subsequent boards were not divided through the centre and have been firmly dealt with by gluing on edges only and put in straight jackets whilst glue sets.

Looking at the four pieces so far set up they look to be OK this morning.

Another lousy board from the same supplier as that Maple that came last year and at the same time.
D

Got four of the boxes well underway without any further problems. However I did bring them indoors last evening because of the drop in temperatures, and its cold and foggy down here this morning. 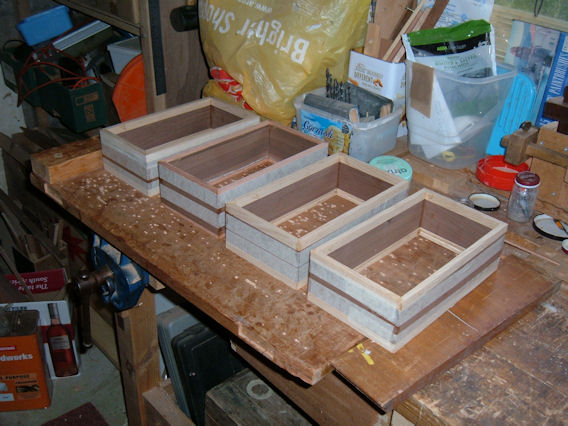 Partially cleaned up four boxes, put round over on top and bottom edges. 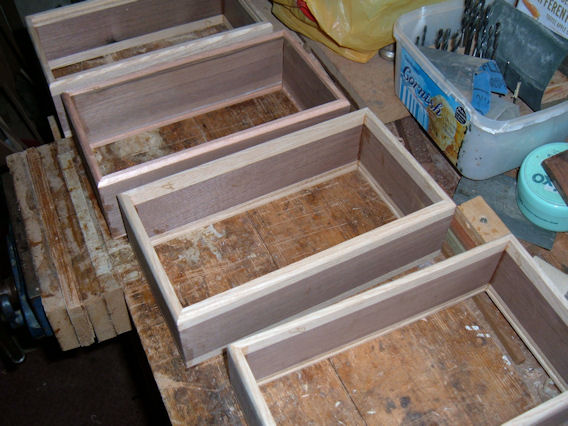 And decided to get some tops underway using some of that banana stuff I cut when starting these boxes. So I am proceeding a different way this time. 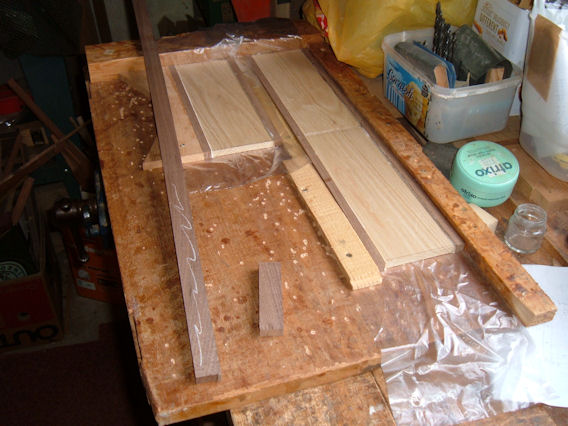 Using that bent Black walnut as a filler and just short 3" lengths so it should not give any trouble, I am cutting the tops already made up down the centre line using the bandsaw and cleaning up on the thicknesser and finishing using the jig saw to cut out an aperture. 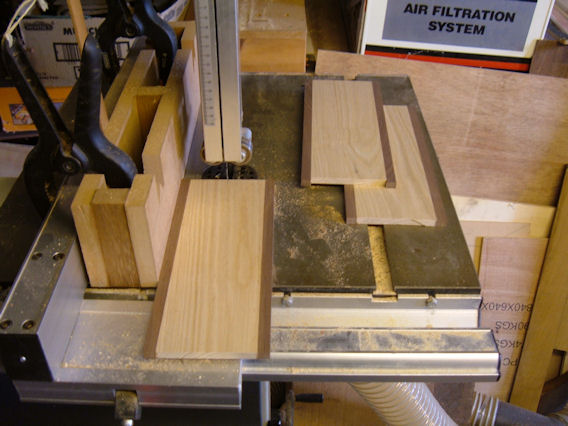 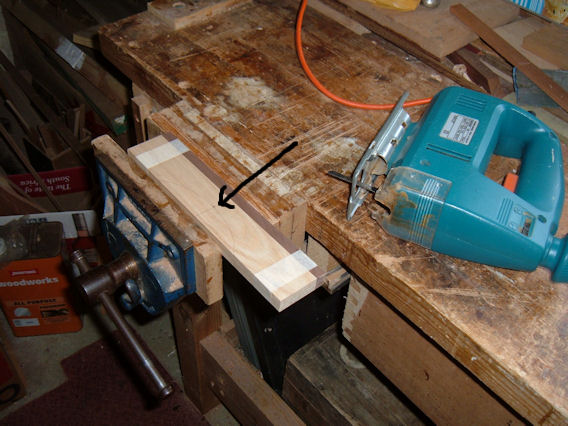 Finally adding those 3" fillers to make up the width of the top. (These well be tidied up later.) 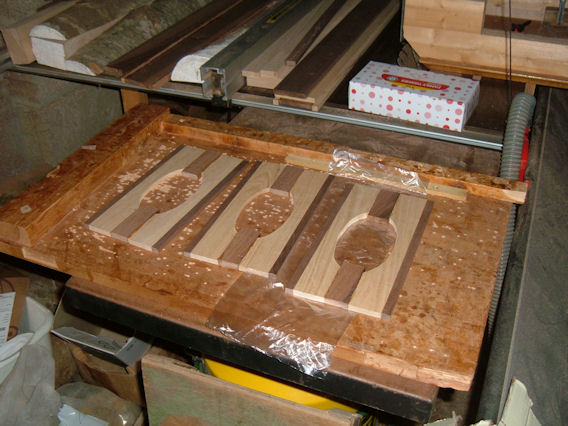 Did some work on the tops, cleaning up the apertures using a sander drum on my pillar drill, its a Draper set and works quite well, picked it up at a Yandles open day a couple of years ago. 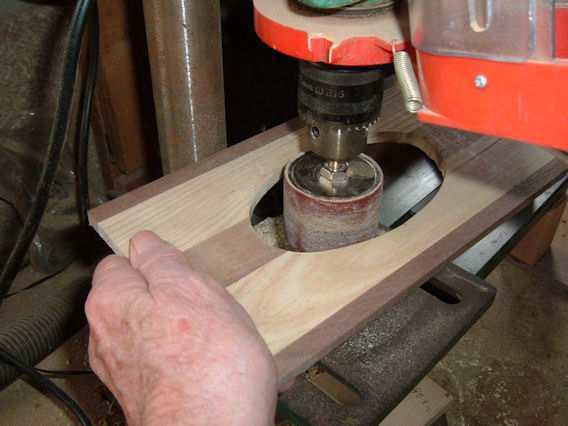 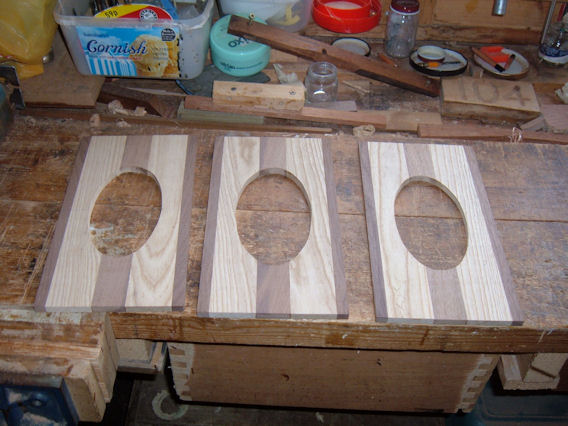 I then rebate the undersides to fit carcass using the router table, also round over the outside edges of tops before fitting to carcass. However I did pull a muscle in my shoulder joint attempting to undo a bit from the router, so its just as well the season is coming to an end for me. 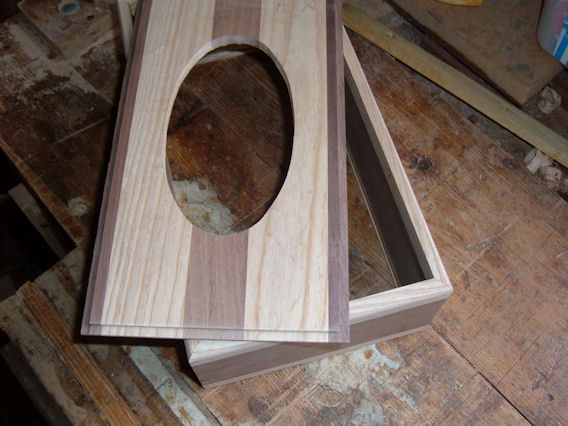 The last three boards of black walnut that were prepared I am assembling differently to previously. (I have been using a lot of masking tape and it has been catching up with those polybags and being a general nuisance).
So here is the sequence I have followed this time.

a layer of polybags to keep my working area clean as usual but strips of masking tape applied across the mitred joins to the outside faces of carcass bits. Also the grain direction is more observable doing it this way. 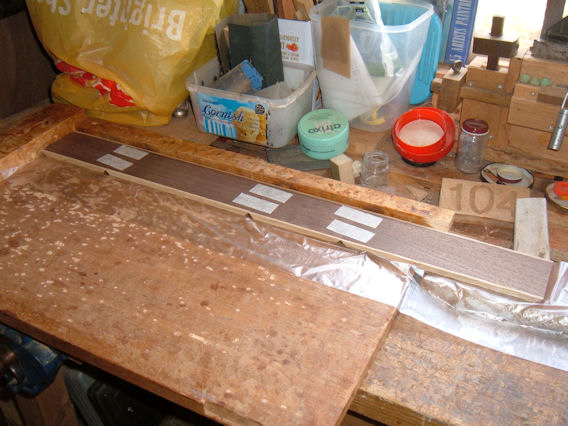 Turn over the boards and then apply the adhesive. 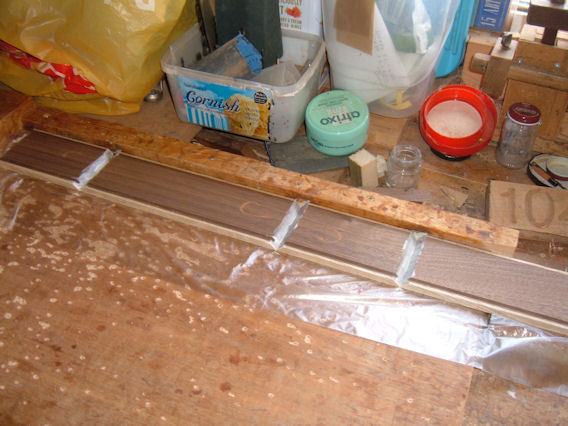 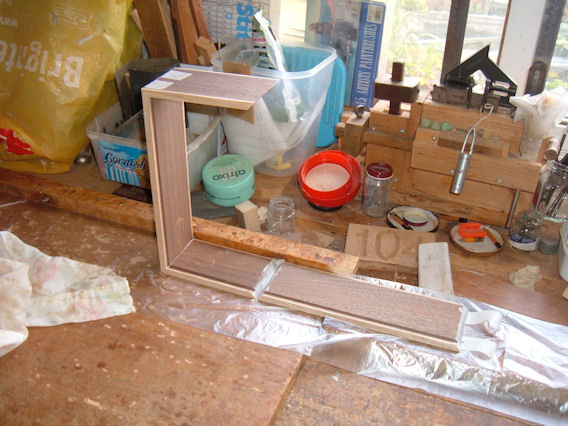 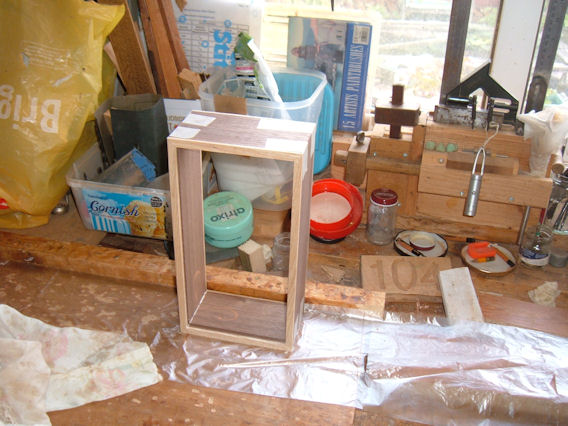 Now three more boxes brought in for the evening so that glue sets OK. (the temps are falling in my shed at night) 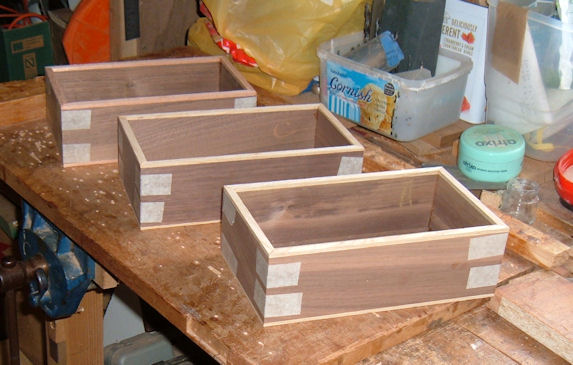 Hope all goes well for you with the operation

and look forward to next seasons output from " Devonwoody's shed " :wink:
G 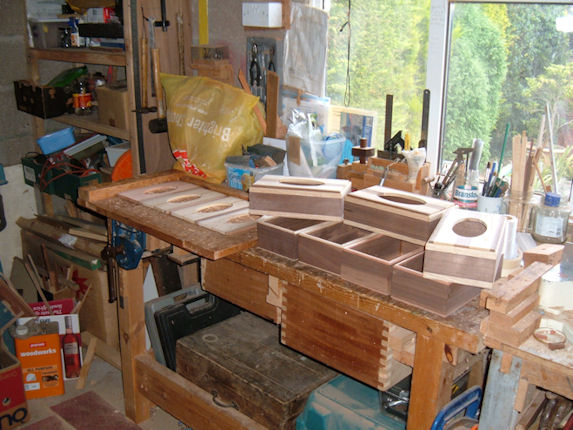 Interesting to me because I notice that the thread was started 6th Sept. and another day is needed to complete the woodwork. Plus waxing or even two or three days varnishing.

My workshop time is roughly 4 hours a day. So there would not be much commercial interest in producing for sale unless you had a high earning or wealthy customer base?


devonwoody":2x369ik1 said:
My workshop time is roughly 4 hours a day. So there would not be much commercial interest in producing for sale unless you had a high earning or wealthy customer base?
Click to expand...

I expect that it could possibly be commercially feasible to offer this kind of thing for sale if you had a workshop set up specifically for optimising the production process, as well - ganging as many boxes into each cut as possible, leaving machines set up exactly how they need to be to get each cut precisely right first time, etc. and ensuring that none of your time is spent waiting, you'd need to always move on to start on the next batch when there was downtime on the first.
(This assuming that there is enough of a market for tissue boxes!)

But of course, you'd be producing many copies of exactly the same box, out of the same 'economically viable' wood every time, and it wouldn't be fun! ;-)
K

Coming on nicely, will look lovely with a finish on them !
J

That is how Andrew Crawford assembles his boxes. The masking tape acting as a hinge - have to stick it down well and leave a 1mm gap between the mitres and they 'click' into place. Works well.