I just acquired a job lot of die chasers and want to sell them on as sets. I have researched types etc but have one question currently unanswered.

The examples here (I have many others) show two sets which are both 1/8" gas thread, type S. Both from the same maker (Alfred Herbert) and both stamped D on the reverse side. There's no other markings.

Aside from the lower set being nearly worn out, what's the difference, in terms of the length of the cutting area? 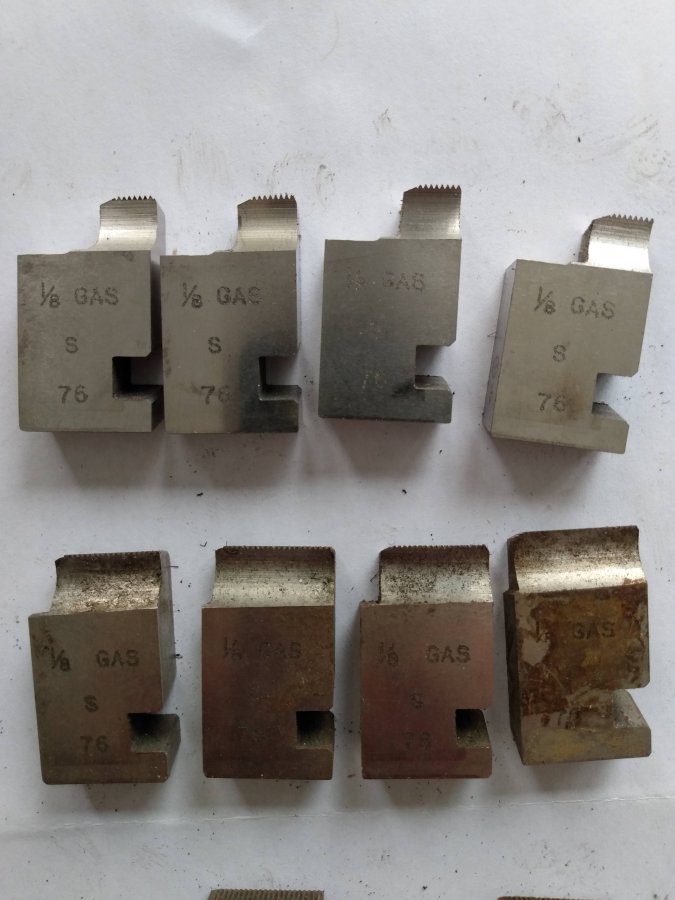 It's a while since I handled any Coventry Dies but they were at one time my 'Bread & Butter' and I've probably forgotten 80% of what I knew then.

'S' simply means that the cutting geometry is for Steel - as opposed to Brass, Alum, Cast Iron etc.

The only difference between the two 'Sets' that you show is that the top 'set' has seen more use and has been re-ground more often. I put 'Set' in quotes because I suspect that the bottom 'Set' isn't, it's just four dies, though it could be that 1 & 3 are from the same set as are 2 & 4. That is just from looking at the amount of material that has been removed from the front edge.

As far as being 'worn out' the top set is closer to end of life, though the bottom 4 could do with a face grind in the same way that the top set have, which might revive them.

To be pedantic, 'Alfred Herbert' didn't make Coventry Dies, their sister company Herbert Small Tools & Equipment did and all at the Exhall Plant in Coventry (where else?). In a previous life I was head of the Export Threading Department there.

If you are intent on selling them on you do need to make sure that you do really have 'Sets' and the only way to determine that - if they have come to you in a jumble, rather than 'Boxed Sets' - is to accurately measure the location of the first full thread profile from the back (right hand side in your photo') remembering that each Die should be a ¼ of the pitch different. In the case of 1/8" Gas that would be 0.0089" - 0.2268mm. To do that job properly does require some sophisticated measuring equipment though, I doubt that you could do it with a 6" steel rule.
G

That's really useful, thanks. I was thinking 'wear' looked like the profile/sharpness of the teeth which looks better in set 1 than set 2. So am I right to conclude that all dies start life with teeth the full width of the metal block, then these are progressively ground away from the side during their lifetime?

Matching sets could be an issue then - I have over 200 dies, a few are in wrapped sets but most had been tipped out of their (filthy and unreadable) boxes so I've been matching them up as best I can. Maybe the grinding would be a better indication, as at least that seems to be unique and visibly different per set.

Yes from 'New' the thread-form on each die would be the full width - but with the obvious proviso that the 'thread' on each chaser would start 1/4 of the pitch apart.

You could simply measure the width of each chaser with a micrometer and the chances are high that if they are the same then you could have a 'set' - being pedantic I say that the only way to be 100% positive is to measure to the first full thread form from the back.

It might be possible for a skilled tool-grinder to sharpen used dies but if they are to be used in a Coventry Diehead then they MUST be a proper 'set'. I'm sure you can see that any four dies selected at random could in fact all be number 1 (say) chasers.

Notwithstanding that, there are those - particularly in the Modelmaking community - who would be happy to have a single chaser which they could use to 'screw-cut' threads without using a proper diehead.

Any sets that are still in wrappers (anti-rust) should be kept like that.
G