For 30 years or more this awful freebie has kicked around in the back of drawers in my workshop, unusable on wood. I can't remember whether it came free in a Cornflakes packet, or with maybe a handsaw, but it was so awful that the last time I used it was as a scraper on some rock-hard plaster to try to form a key (it was useless even at that). Here it is in all its glory: 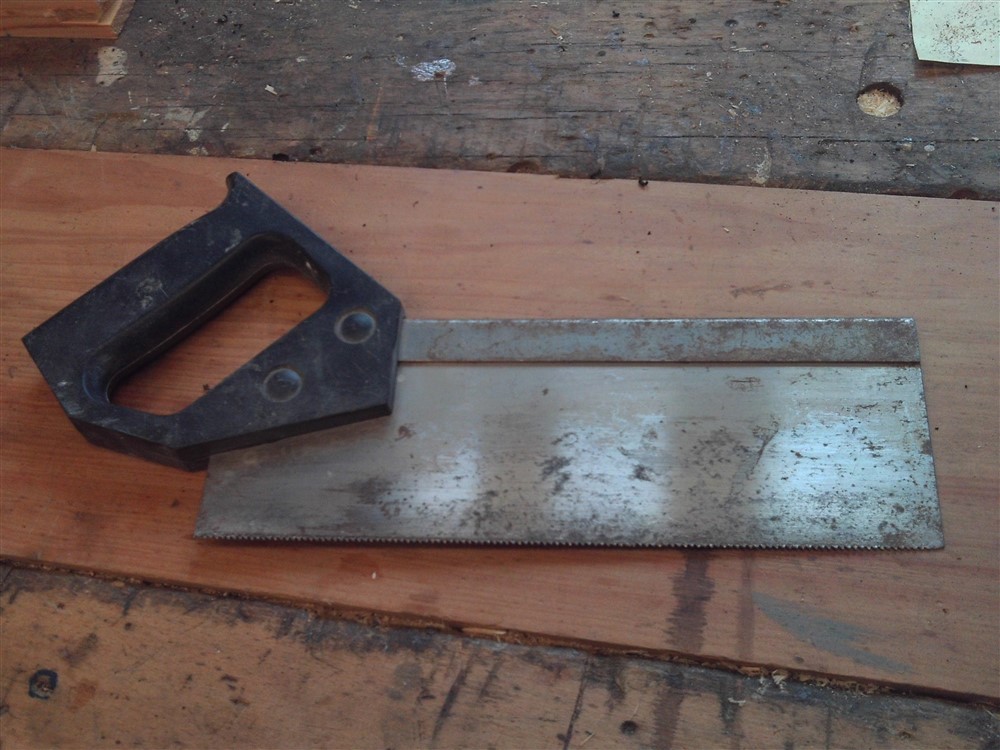 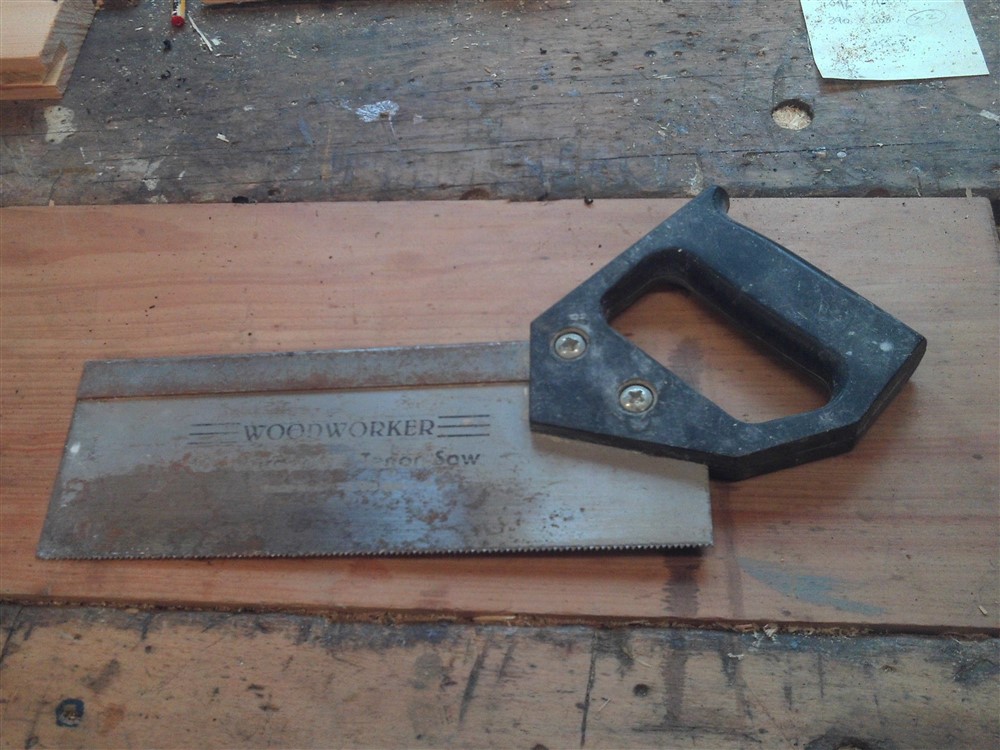 It had some sort of coating on it which had prevented it rusting, so cleaning it up wasn't very difficult (120 grit and a squirt of WD40): 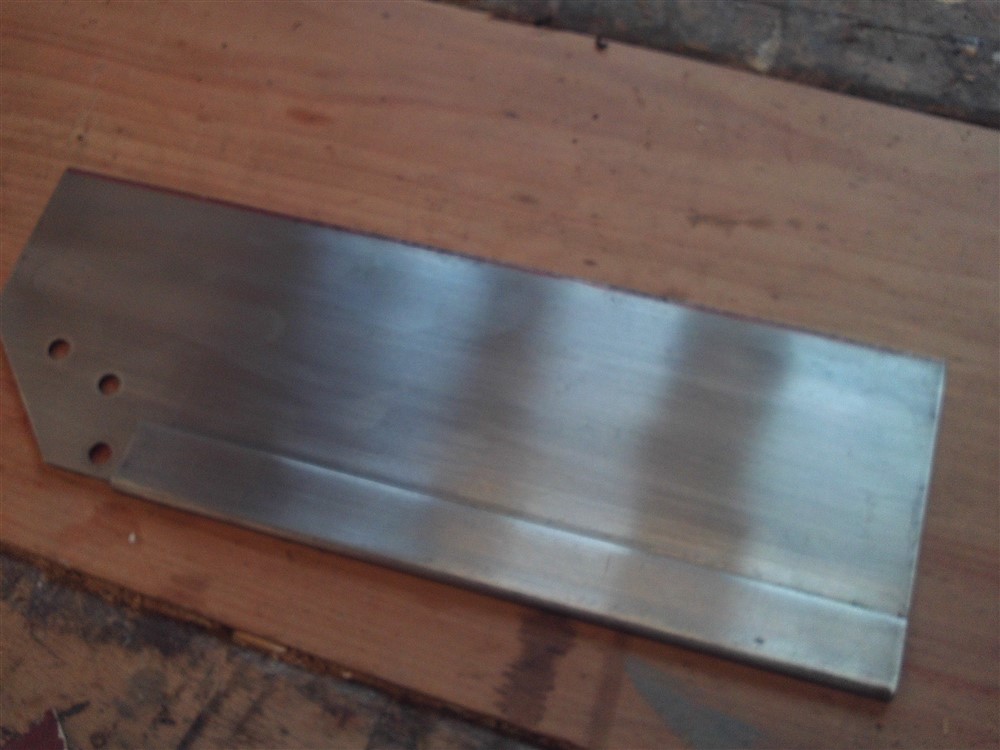 Being hardpoint (heat treated), the teeth were too hard to file off, so I marked a line and ground them off on the bench grinder: 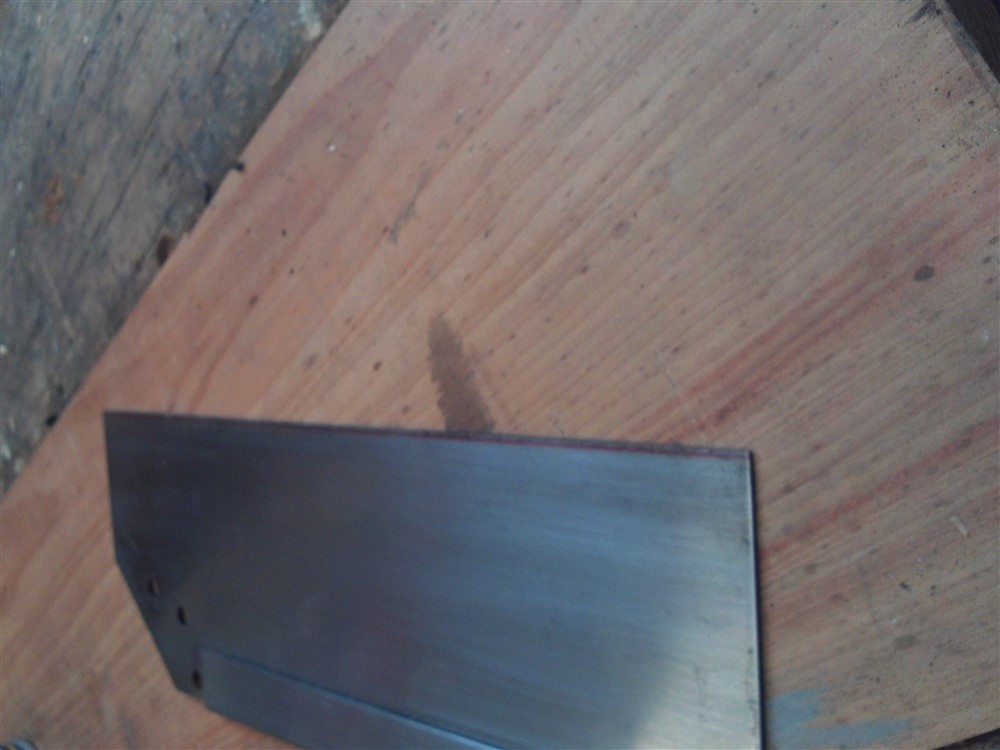 There wasn't an awful lot of merit in the handle, so I ummed and ahhed for a while before deciding to make a new one. I just happened to have a scrap or two of bog oak kicking around, so I thought I might try that. I traced over a handle from my tenon saw which I've always found really comfortable: 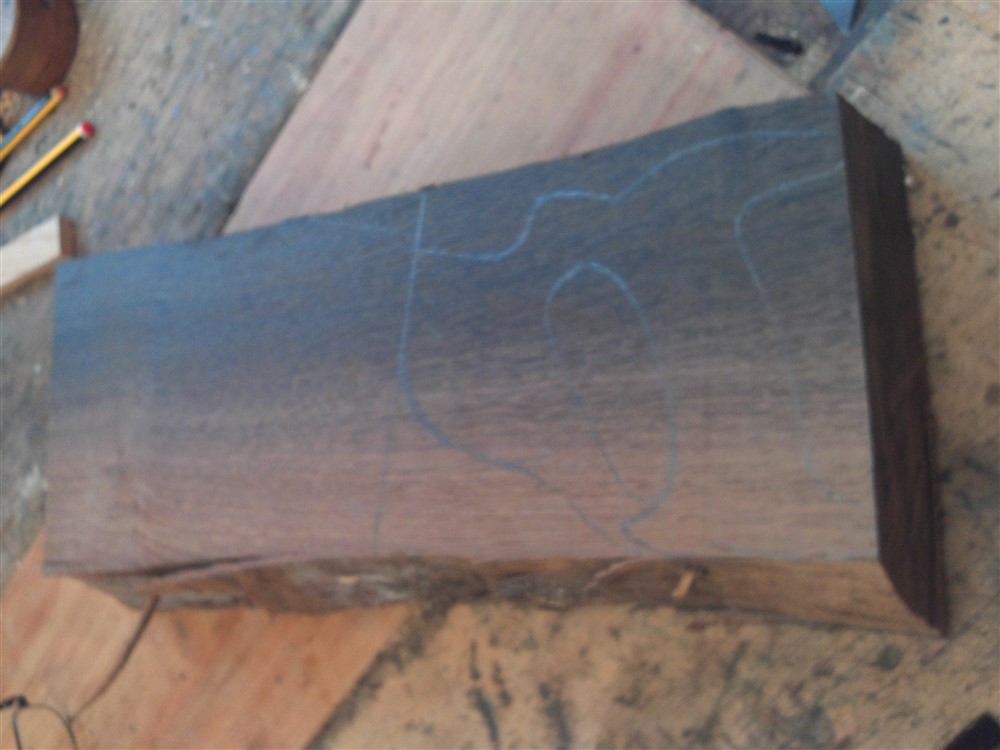 I've never owned a pistol grip saw, so I thought I'd give that a try. I sketched out the bits I didn't need, and in a few minutes on the pillar drill and the bandsaw produced a blank: 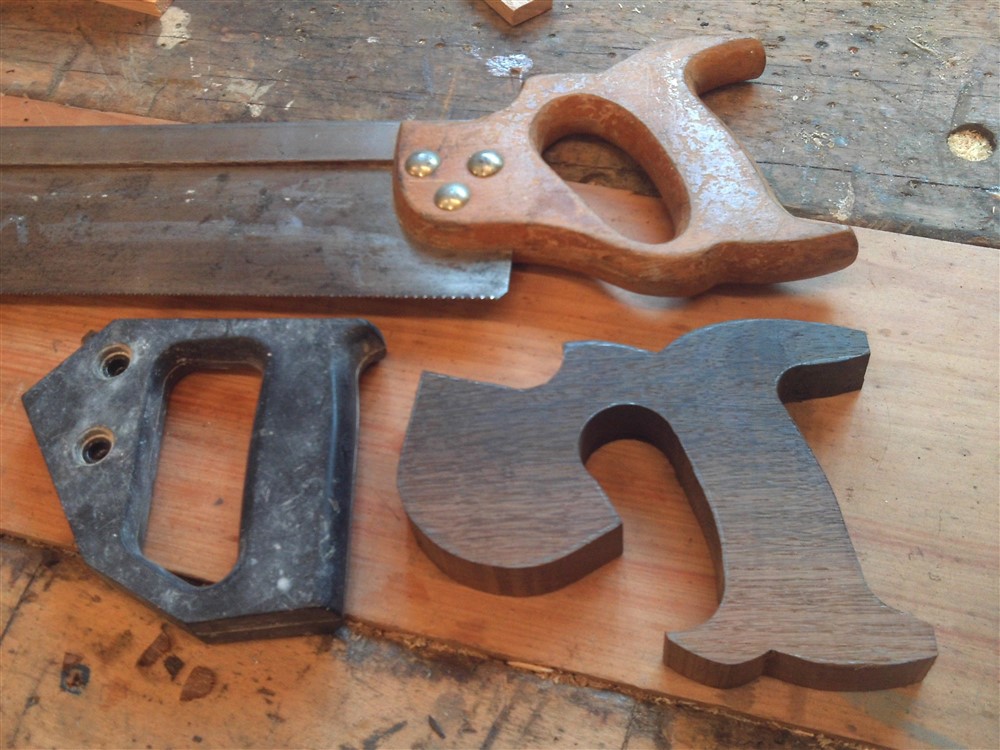 It's not too late to go back to the original handle, but the saw nuts will only screw into the plastic so many times........ Anyway, a few minutes with a rounding over bit on the router (mind that end grain!), then rasps, sandpaper, bits of dowel, chisels........you know, getting rid of all the stuff I didn't want, I ended up with a really comfortable handle: 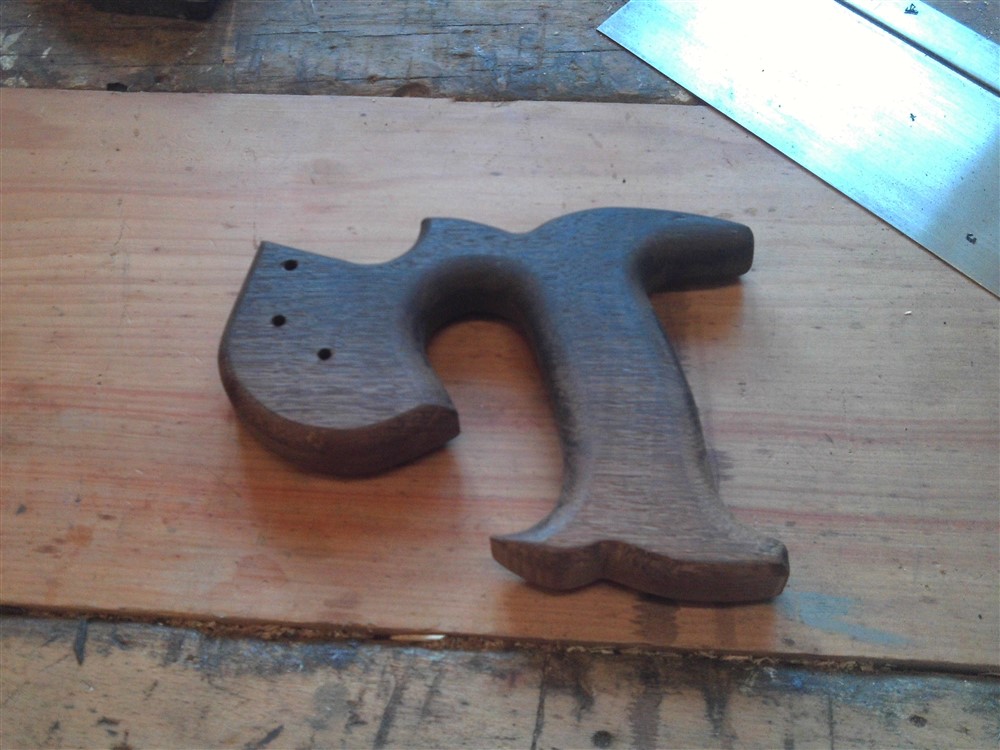 Cleaned up with some white spirit: 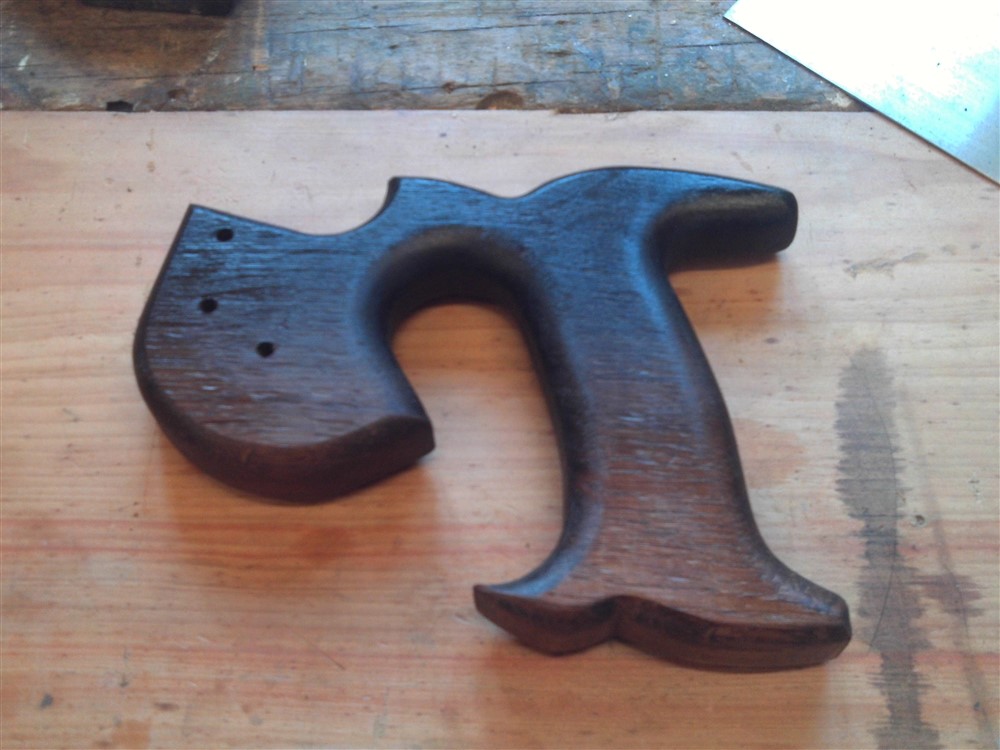 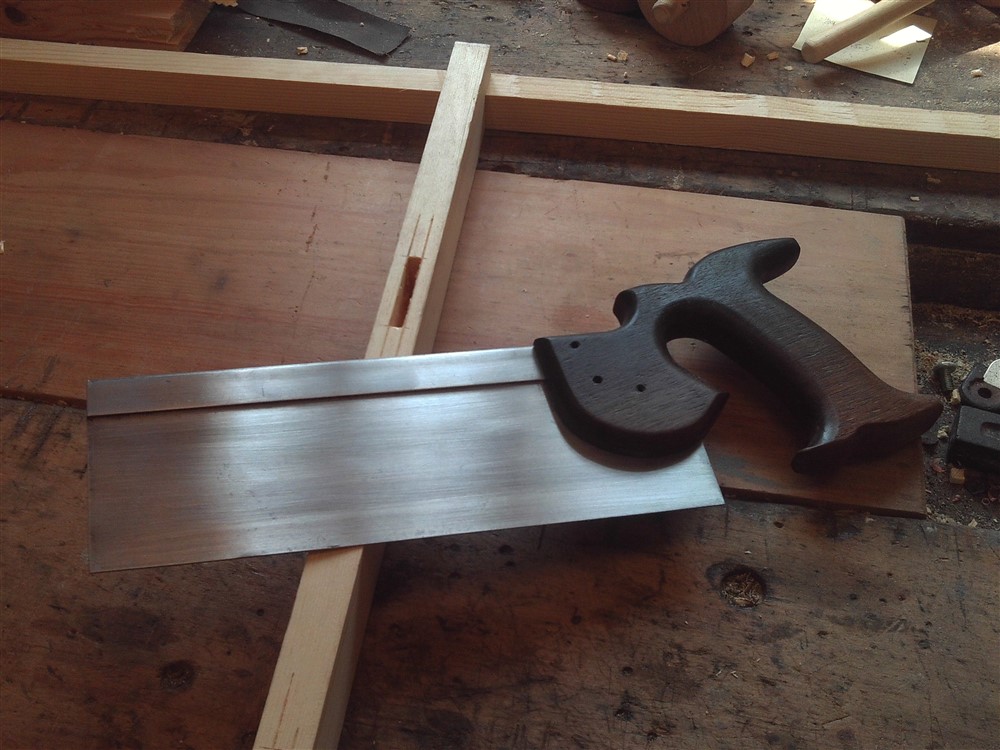 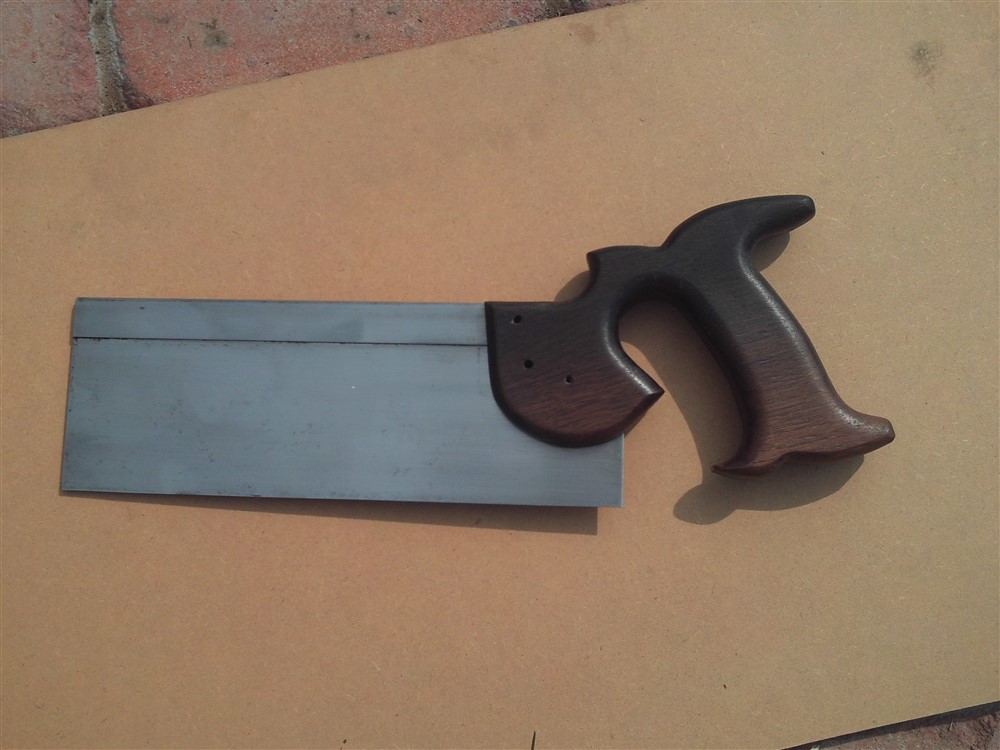 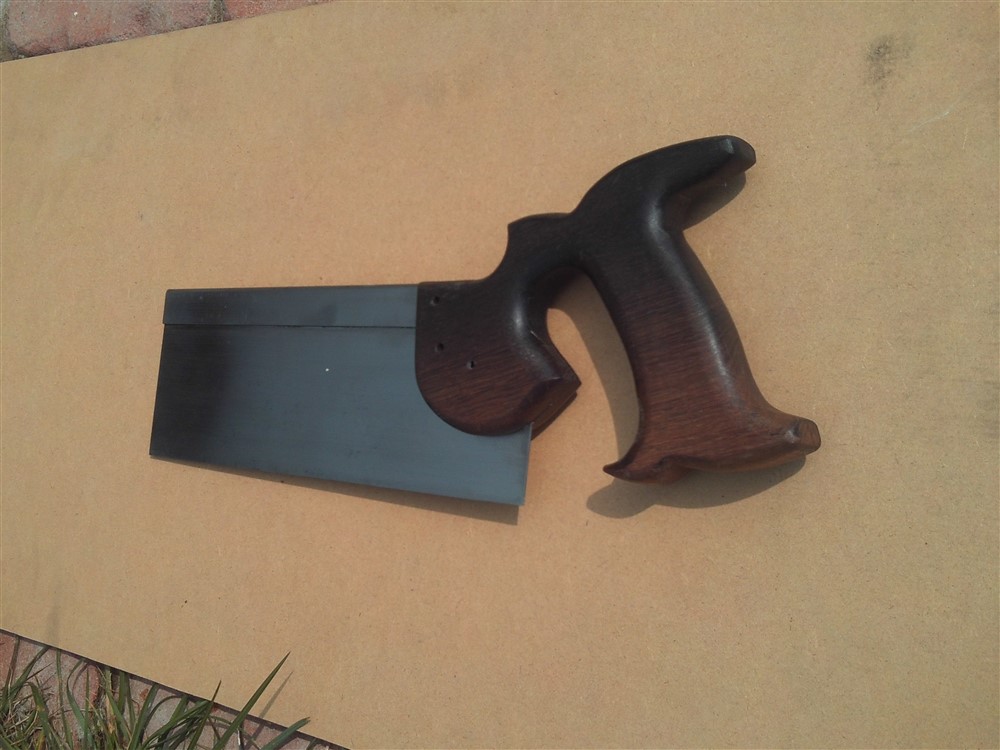 It'll probably need some teeth, I guess. I've never cut teeth from scratch before, and I've no idea how it is supposed to be done, so after filing the edge dead straight, I printed off some lines at 12 per inch (my other saws are 15 and 21 TPI, so I've got the finer stuff covered): 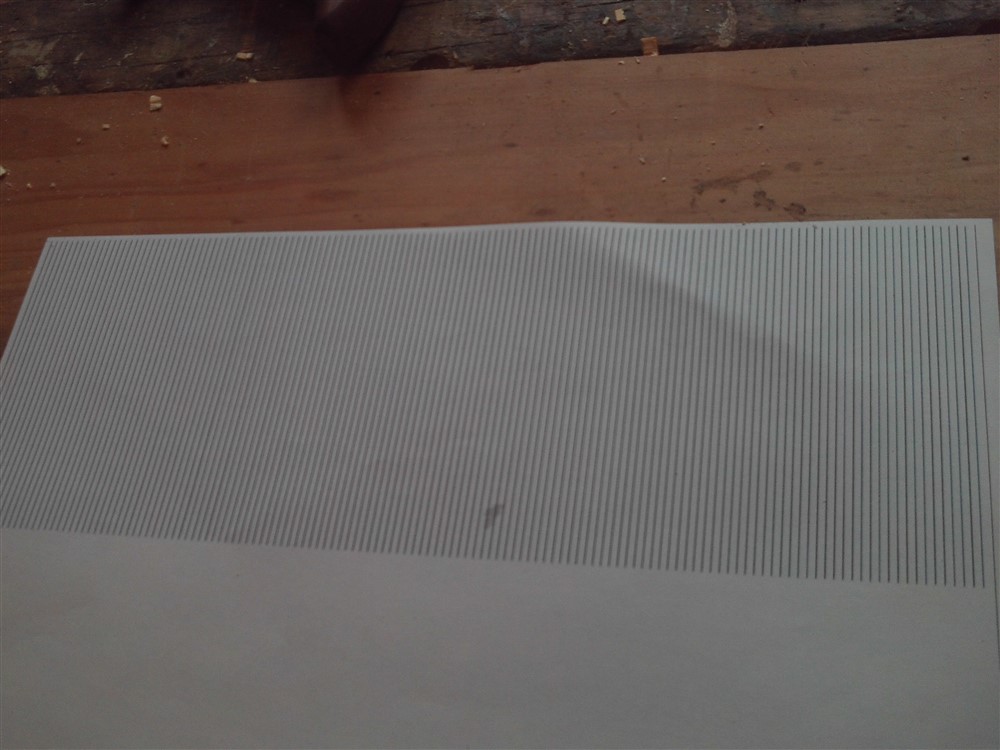 Then taped a section of it over the edge of the plate: 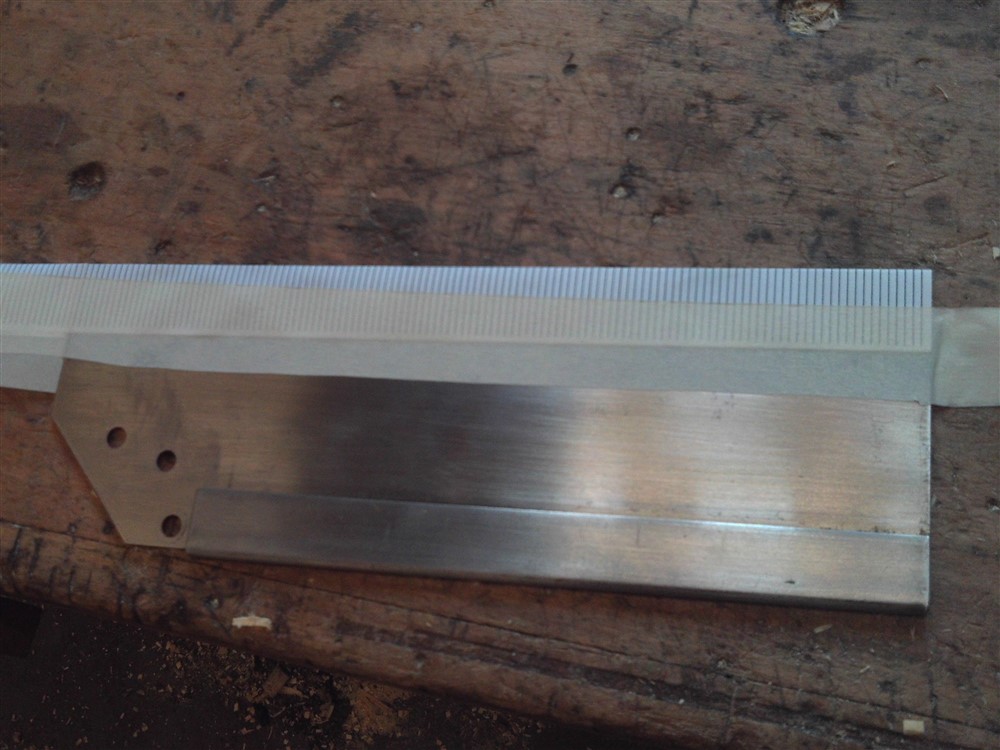 I transferred those lines to the plate by sawing directly through the paper with a junior hacksaw. I sawed too deep, as you'll see later: 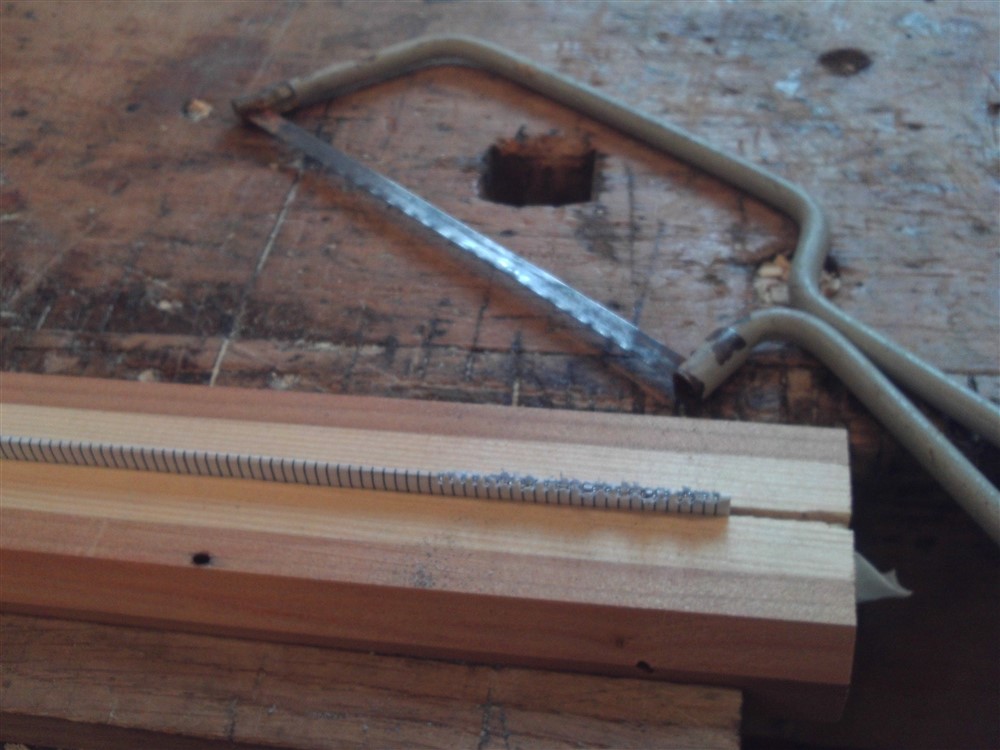 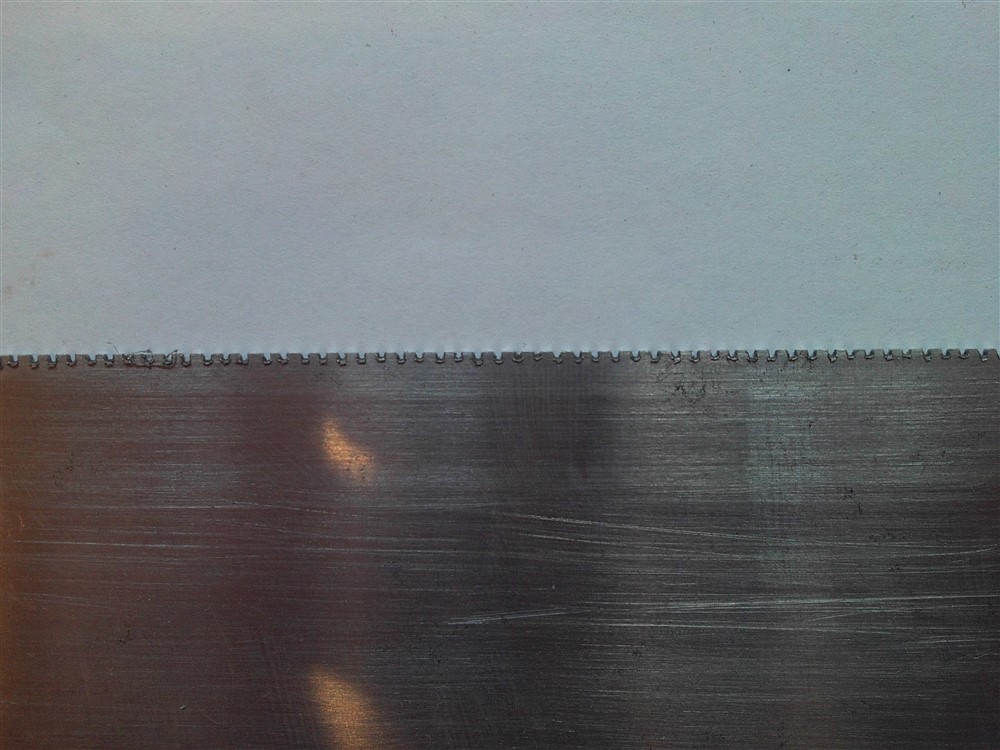 Interestingly, I picked the plate up at this stage and without a handle, used it to cut pretty cleanly through a piece of 2x1 pine!!

Now, I've heard one or two people talk about using a soft start to their tenon saws, going from a relaxed profile to a rip profile over the first couple of inches, so I thought I'd give that a try: 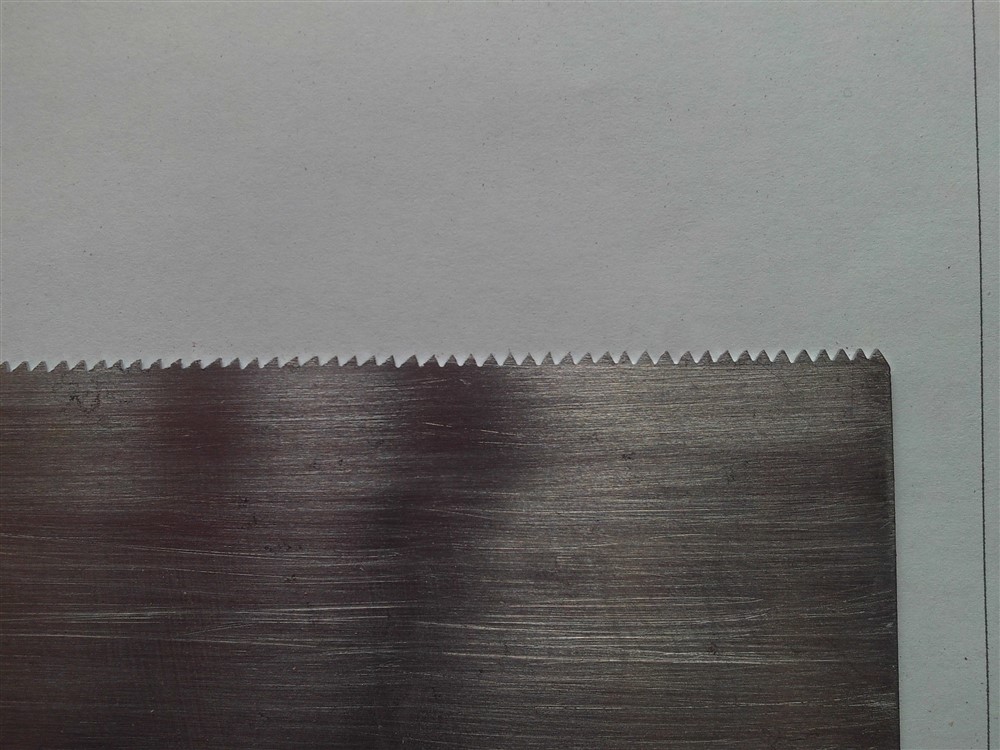 You can see the slope of the front of each tooth change from 60 degrees to vertical over the first 2 inches. You can also see that the over-deep hacksaw cuts have left their mark. This saw won't really be right on this sharpening, but I'll get it spot on next time.

My damn setting pliers snapped in half whilst setting the teeth. Cheap rubbish only lasted 40 years: 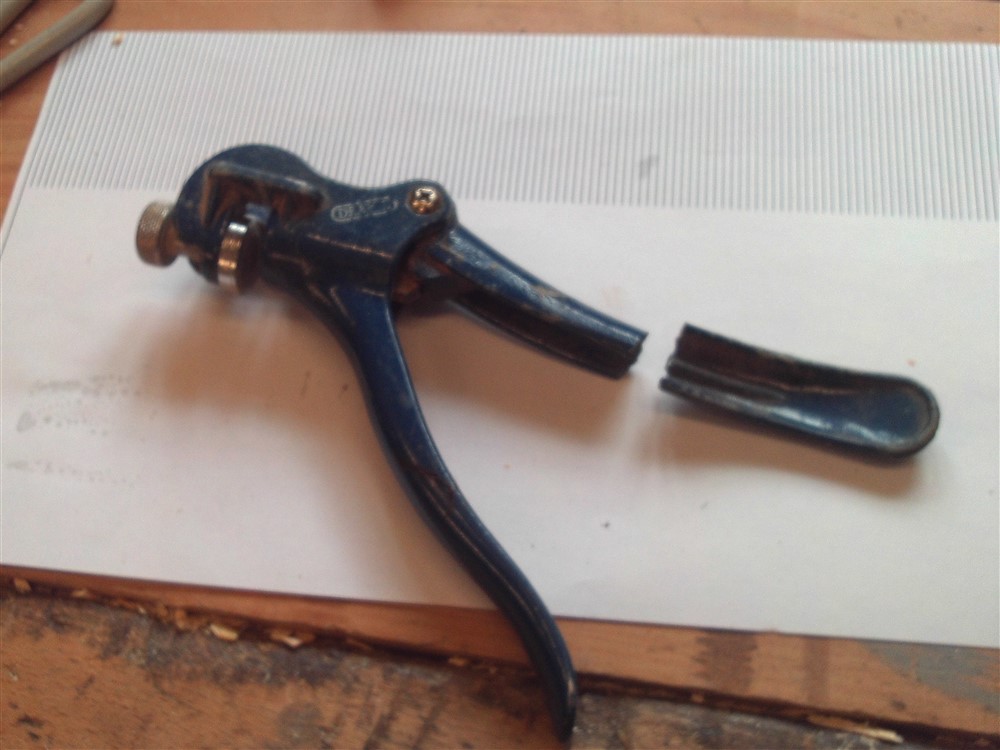 It works, even without any saw nuts: 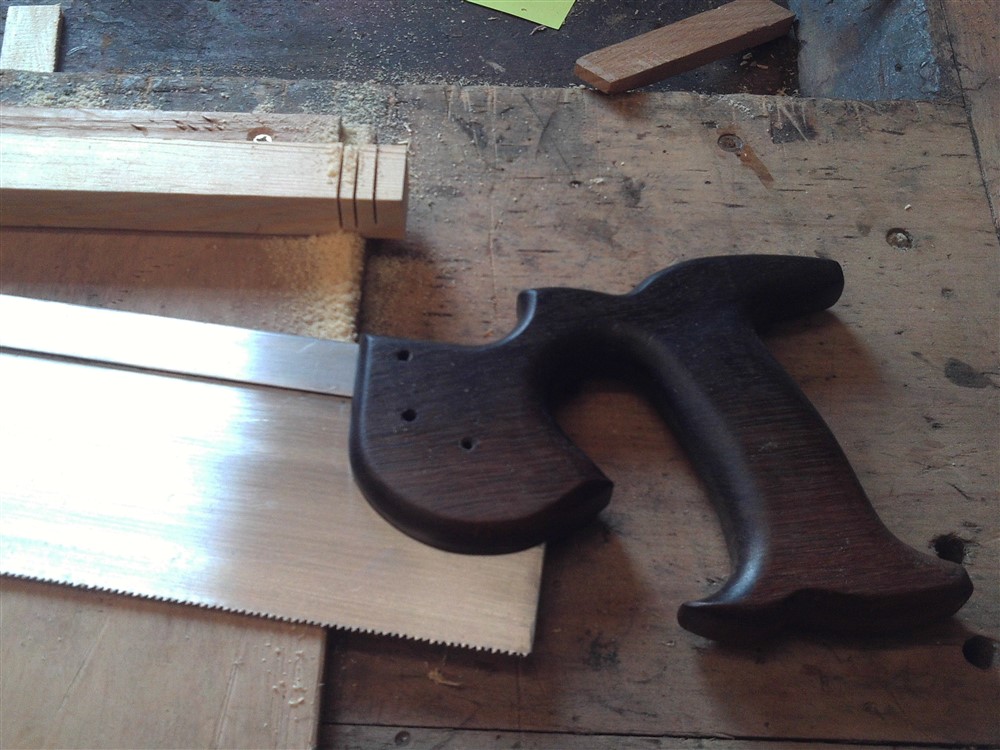 I really like the gradation in colour in the handle, which just has a coat or 2 of Osmo on it, and some wax: 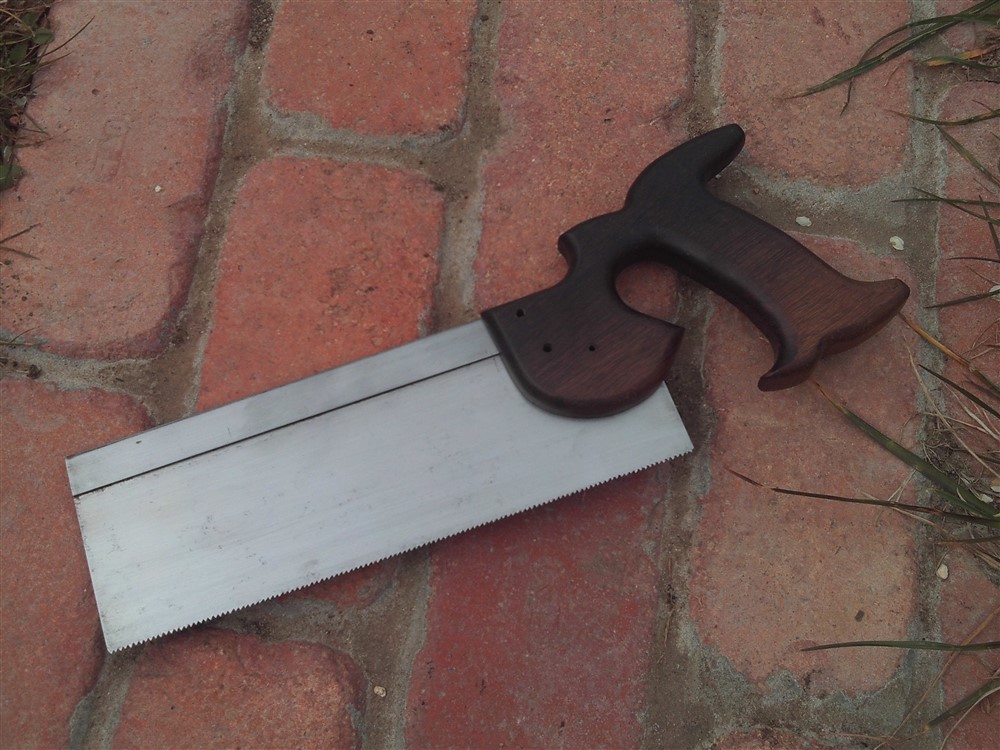 And just a reminder of what it looked like when it started:

I'll order the saw nuts on Monday, and they'll be the most expensive part of the saw.

I think that the "Woodworker" lettering matches what the Woodworker magazine used to use until the late 60s or early 70s, so you may have had a rare promotional offer saw there!

I've never bought a woodworking magazine, so maybe someone else gave it to me. Rare you say? So I've destroyed a rarity! Pass the nettles, I need to auto-flagellate. :lol:
L

On that saw set.
Wack a bit of old copper water pipe on the bust handle and it should see you out.
J

I guess all your tools will have bog oak handles in a few month's time.
Nice job.

Nice job.
how long did it take to do?
D

Garno":xbqrzvlr said:
Nice job.
how long did it take to do?
Click to expand...

A couple of hours, I guess. I was actually doing it in between chopping out m&ts on a wall of cupboards & drawers for our utility room, so it wasn't done in one go.

John Brown":2wvk2h6i said:
I guess all your tools will have bog oak handles in a few month's time.
Click to expand...

:lol: I don't own many tools. Enough, but not many. Look out for a pair of router planes coming up in the next few weeks.

Typically utilitarian for you (and that's a proper compliment on your philosophy of tools for making not for show btw). Nice job on the handle. If I'm honest I might have sourced a cheap older saw to get the brass back personally because I'm a fancy pants tool collector by your standards. :shock:
I just like a bit of brass. Yeh I might be shallow ( ) but it would look great with that oak and the extra weight. One other reason. I wonder if the steel would hold an edge longer in older saw plate? One for those well above my level of knowledge of metallurgy and manufacturing standards.
But if you're going to the trouble of making a handle and fitting etc etc, (I know the biggest cost is the saw nuts what with your 'kid in a sweet shop' glut of bog oak) but .... well... anyway.... you get my point.
I could be well out on the edge retention of the cheap saw plate. It's a genuine question not a criticism.
Look forward to my offcuts. No questions asked. 8)
Chris

Mike, great job. Do you have another saw set? I'm pretty sure I have two and have never used either, so if I can find one (and it is a big if), I'll bring it down for you on Sale Day.

Steve Maskery":2tlvxnds said:
Mike, great job. Do you have another saw set? I'm pretty sure I have two and have never used either, so if I can find one (and it is a big if), I'll bring it down for you on Sale Day.
Click to expand...

Really kind of you Steve. I've been offered one by someone on Wood Haven, but if that comes to nought, I might just take you up on that. Thanks so much.

The saw nuts arrived today. Yeah, it would been better if they were steel: 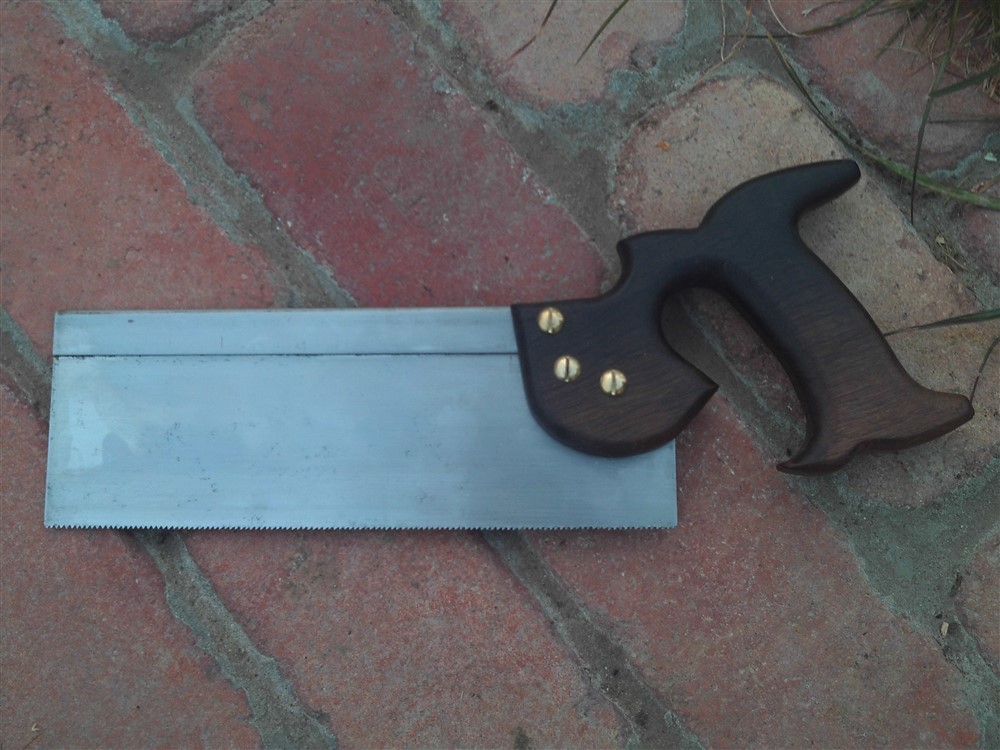 It works, albeit a little harsh (feels like one tooth is prominent somewhere): 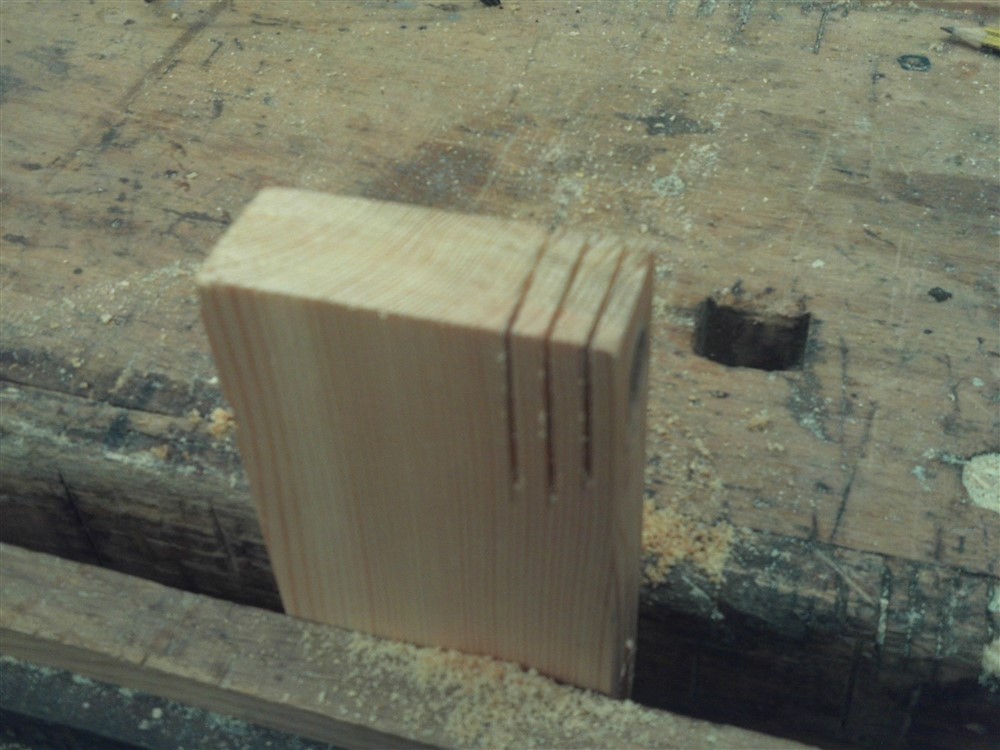 Anyone who fancies making their own tool handles, or anything else, out of bog oak, you'll need to PM for details.
J

Congratulations Mike. I wish I had the ability (and time!) to do something similar.

Thanks John, but there is no ability required, and very little time (only a couple of hours or so).
E

Lovely job. Saw teeth to me are one of those mysterious parts of woodworking that I feel I can't touch, so seeing this makes the whole process feel much more accessible.

There's something really satisfying, more so than other things I find, about making your own tool handles.

Nice job Mike. Do you have any view yet on the soft start you put on the teeth? I do that on my tenon saw. If I ever cut new teeth on it I will also increase the TPI for the first inch or two. I think that would be nice.

Do you have any view yet on the soft start you put on the teeth? I do that on my tenon saw. If I ever cut new teeth on it I will also increase the TPI for the first inch or two. I think that would be nice.
Click to expand...

Not yet (I've only cut those 3 little cuts in the last photo!). At the moment, like all newly sharpened teeth, it feels a little harsh. I might just rub an oilstone along the sides gently, to take off the highpoints. I'll admit to not generally starting my cuts at the toe-end of the plate, so taking advantage of the soft start will mean altering (bad) habits.

El Barto":1kn6uk5z said:
Lovely job. Saw teeth to me are one of those mysterious parts of woodworking that I feel I can't touch, so seeing this makes the whole process feel much more accessible. ......
Click to expand...

I thought the same for years, decades even. Ironically it was possibly buying my first chainsaw which changed my view. Prior to that I had sent my saw away for sharpening, but when you have to sharpen a chain every hour or so, and it is so simple and so effective, it does make you think that doing a tenon saw shouldn't be so difficult. After all, as a nipper I'd seen my father do his, so it couldn't be so hard, could it? Turns out it isn't.