***BREAKING NEWS***
We are getting reports that Steve Maskery has been seen tampering with his bandsaw lower blade guard (Kirkby-in-Ashfield, Thursday).
We are unable to verify this at this time, due to the difficulties of getting our independent reporter to the scene and be COVID-safe, but a man claiming to be the brother of his best-friend's next-door-but-three neighbour, whose mother-in-law once had a one-night-stand with Maskery, back in the day, says that when he challenged the alleged offender he was told by a very shifty-looking Maskery that it was for "environmental reasons".
We will bring you more details on this story as we have them.
Last edited: 6 Nov 2020

Never mind the blade guard, what about the one night stand?
N

Reports are now CONFIRMED that Steve Maskery, of Kirkby-in-Ashfield has been seen removing part of his bandsaw lower guard by drilling out the fixing rivets with a cheap Aldi cordless drill. 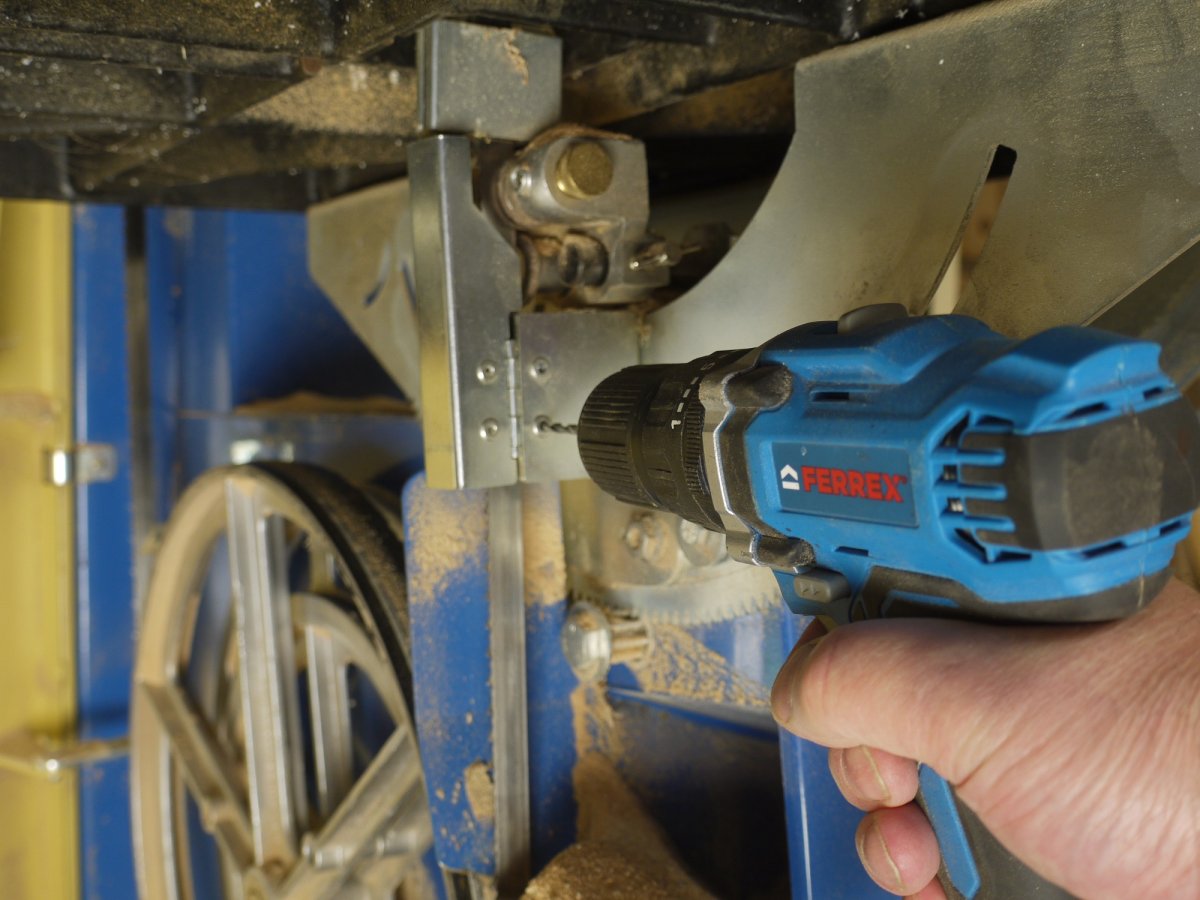 When asked to justify this behaviour he initially claimed that it was to test his eyesight, but later changed his story to the effect of allowing better access to the blade for a home-made dust-extraction nozzle and that the guard was "in the way". When asked why, he said it was because, despite trying for many years to find a way to improve the woeful DX on his otherwise rather excellent Scheppach Basato 5-4, there was no way he could realistically fix the nozzle from the back, because the underside of the table is ribbed rather than flat and anyway the trunnions are in the way. 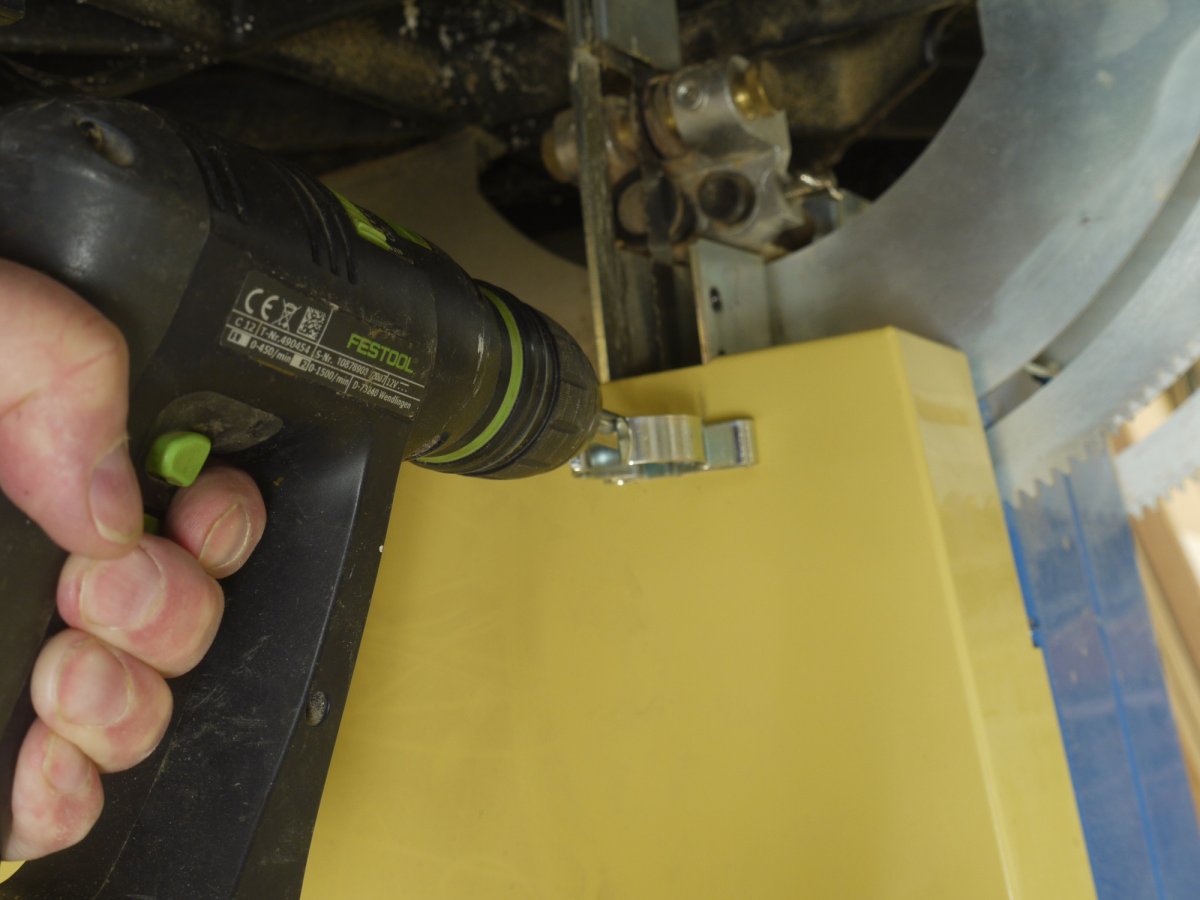 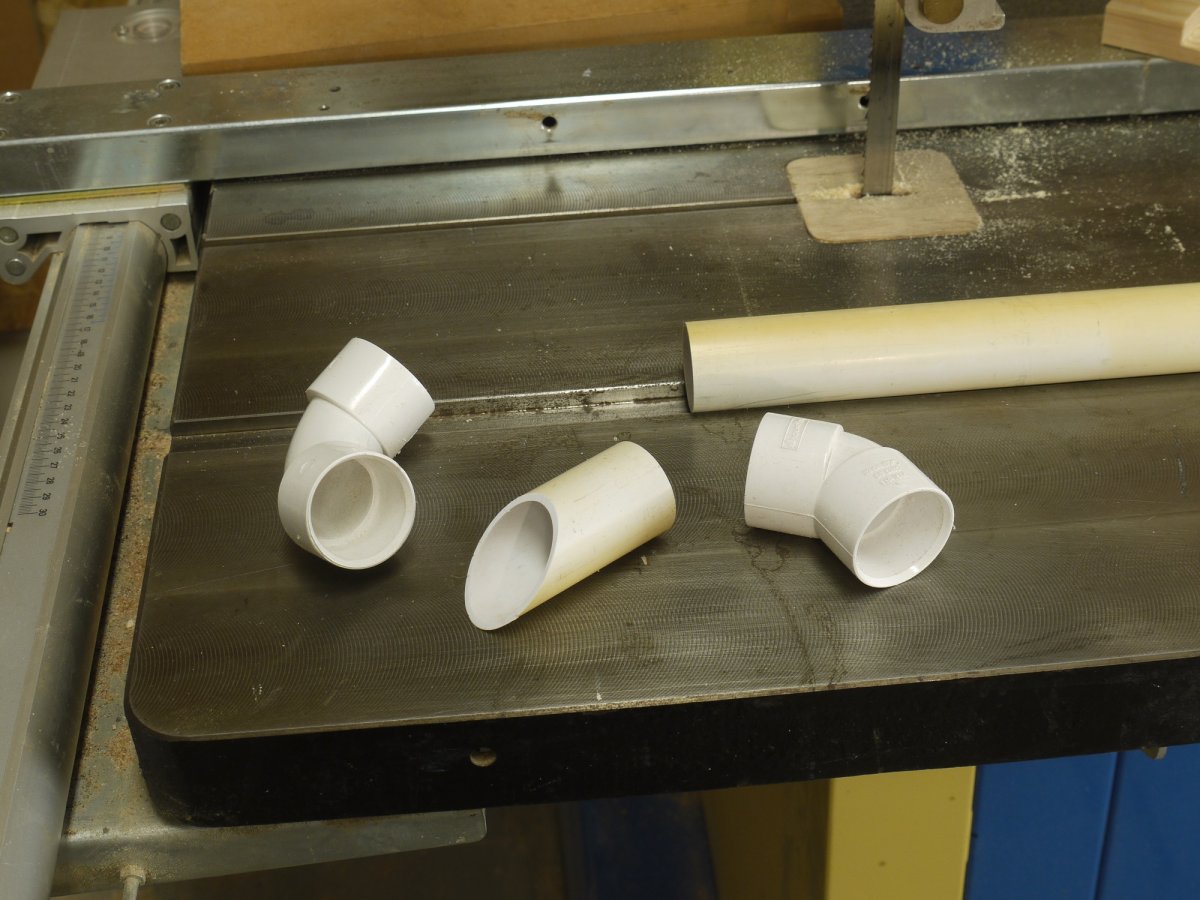 to make a Heath-Robinson DX port. 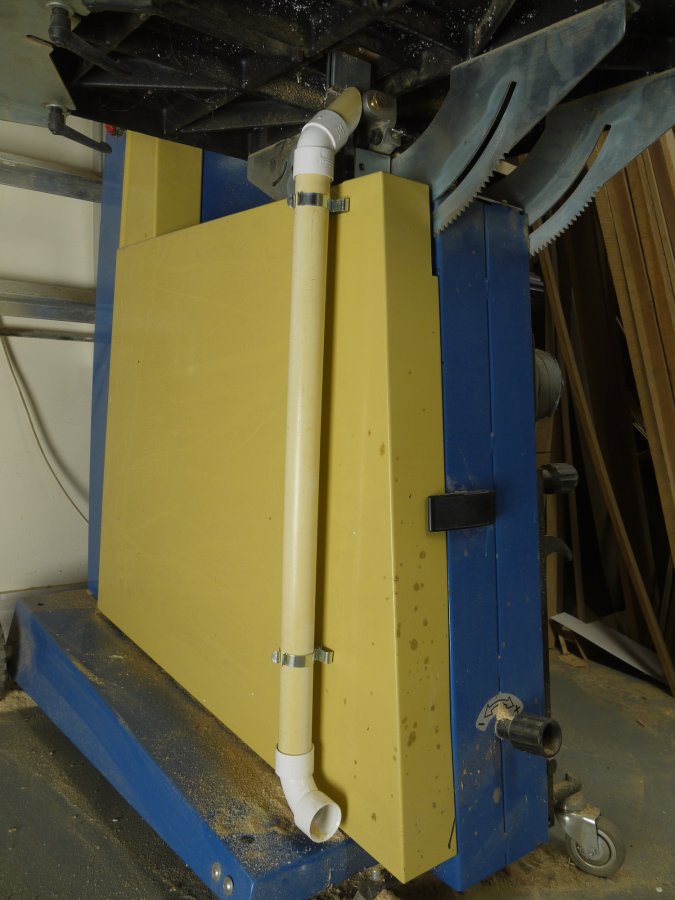 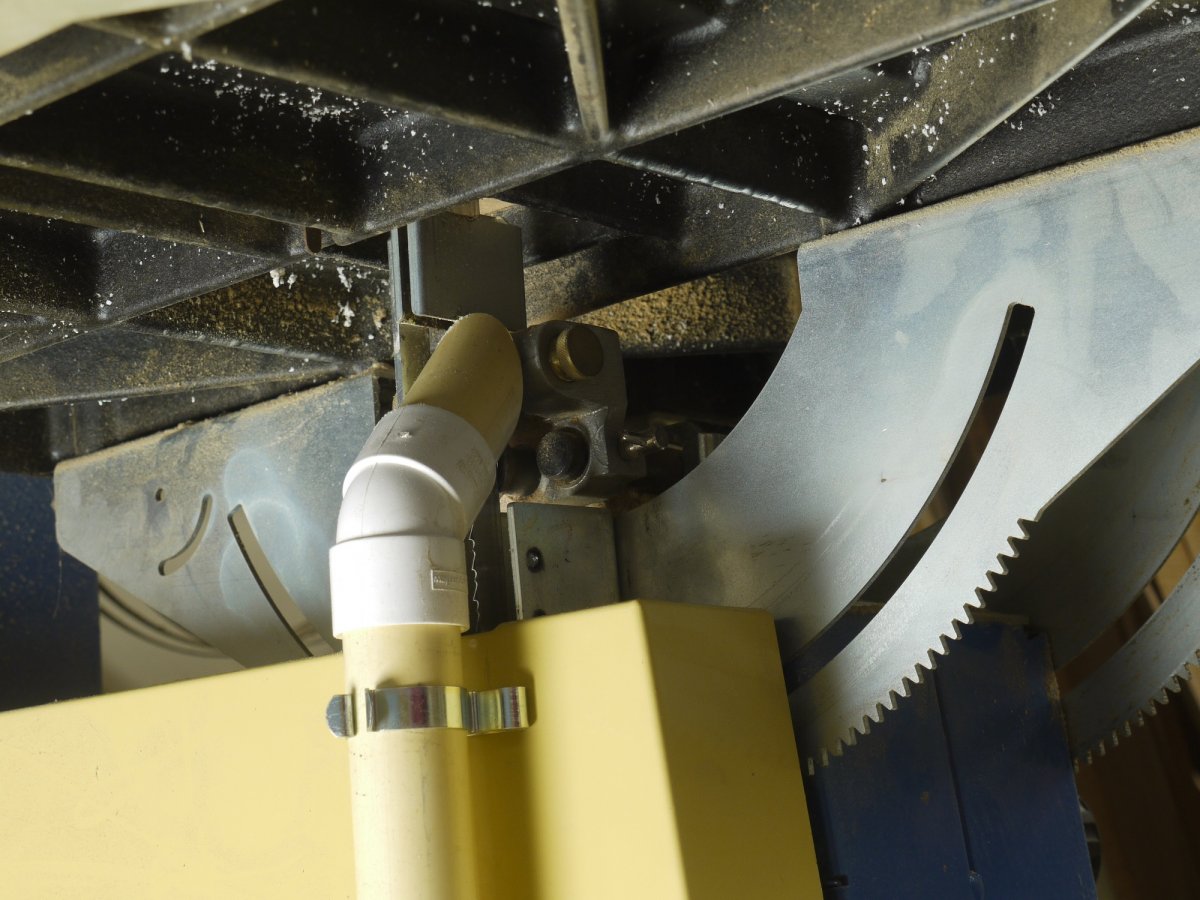 Maskery offered no explanation as to why he was using a cheap and cheerful Aldi drill one minute amd a posh Festool jobbie the next.

When asked what was wrong with the 10Omm port already on the machine, Maskery laughed condescendingly and claimed that it was far too far from the point where the sawdust was actually created to be of any use whatsoever and that the HVLP machine that fits such a port does not have enough oomph to snuff out a candle, let alone collect sawdust from 400mm away. By using a HP but LV machine, like a shopvac, specifically targeted at the point where the blade exits the table, the chances of collecting the sawdust and thus keeping the workshop cleaner, are vastly improved.

Maskery claims that he already had a length of 32mm waste pipe lying about behind his workshop, so only had to buy the bends, which are specifically chosen to be as slow as possible so as not to impede the airflow any more than is necessary, but admits that he had to visit Toolstation for the purchase. He insists it was before lockdown, however, and he did wear a mask at the time. 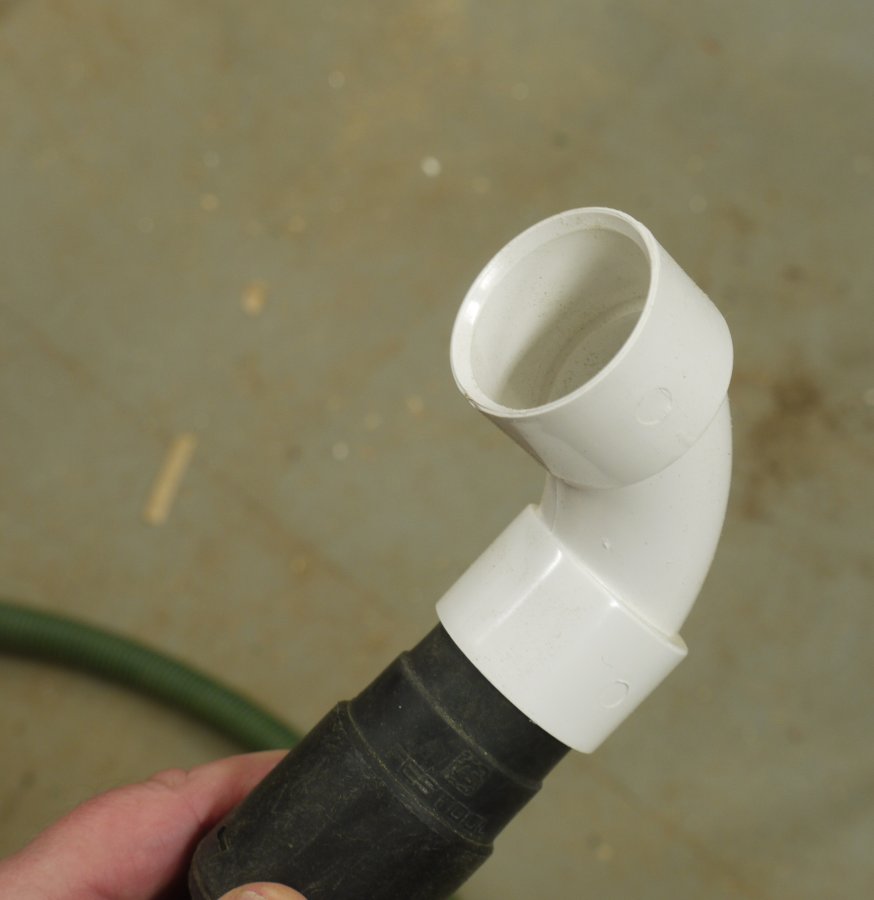 otherwise he would have had to use 40mm pipe and cobble together some sort of adapter.

When asked how he felt about setting an example of tampering with his blade guard, he became very agitated, shouting "It's my workshop, it's my bandsaw! It even lets me tilt the table as before! I'm making things better! It's not as if I'm beggaring off to Barnard Castle!"

At this point our reporter beggared off and left him alone. She returned to the office shaken but otherwise unharmed. The authorities have been informed.
Last edited: 6 Nov 2020
B

God, I thought Orson Welles was informing us about the Martian invasion...
N

pipe dreams.
it'll never work.
32mm isn't big enough
40mm is to big
that bend will slow it down to much
That's fine if your cutting softwood but it will never work with heavy hardwood.
I hope you didn't try to use your patented, Maskery wiles on the poor girl. bet she didn't know if she was coming or going.

Glynne said:
Never mind the blade guard, what about the one night stand?
Click to expand...

What I want to know is, even it it was "back in the day", what the illustrious Mr. Maskery's got - or even HAD back then - that will stand for one whole night!!!
N

I think many people are guilty of removing or modifying the Record bandsaw guards simply because they are overkill and prevent easy access to the blade guides, if HSE had their way the entire blade would be inaccessable.

This BAND saw environMENTAL hooray-HENRYs sucking up to the WITTY government wood particle physicist who stated that reports of a major improvement in Kirkby air quality were completely unfounded. However the local Parish Council are demanding track-and-trace investigation into rumours that a resident (MASKERading under the pseudonym STEVE) is depositing vast quantities of arboreal waste into their non-recyclable dust collection system. In the meantime a 32 day lockdown is being enforced so that the super-spreader can be apprehended and subjected to a re-education programme which will be done via a bespoke Zoom link.

In those days you just bought the lass a couple of Babychams.

I'll have a Babycham!
Well someone had to say it.

Steve Maskery said:
I'll have a Babycham!
Well someone had to say it.
Click to expand...

Not from me you won't

I love this Forum

Steve Maskery said:
I'll have a Babycham!
Well someone had to say it.
Click to expand...

I have a 40 year old bottle of babycham in the fridge, waiting for a special occasion.

Pete Maddex said:
I have a 40 year old bottle of babycham in the fridge, waiting for a special occasion.

Why doesn't that surprise me?