cammy9r wrote:Hi Skipdiver, yes you are correct in that you can build no higher than 2.5m if within 2m from the boundary without planning permission. Do you get on well with neighbours. If yes tell them what you propose, if they are happy then you probably wont have any problems with planning.

Thanks for that. The neighbours seem fine but i only moved in last friday so not too sure yet.

My new garden isn't as big as my previous one and is long and narrow, so it had to be fairly tight to the boundary and i decided to scale it down from my other workshops and stick to the rules. Will put a 2.5 metre high flat roof on it despite me not liking flat roofs and will have to live with the smaller space and headroom. Already dug out the footings and am concreting tomorrow.

When finished, i will be adding an extension to my house, so will have BCO visiting in the near future, so can't really do anything i'm not supposed to in case they start asking questions.

I'll add on to it later when my house is finished and i have charmed the neighbours.

These are my principles,if you don't like them ,i have others.

Waka wrote:I'm a bit confused (thats not hard) regarding the erection of something within 1 m of the boundary and planning permission. When I had my workshop extended a couple of years ago I followed the line of the existing building which is the actual boundary.

I put in an application with plans to see if I needed planing permission and the answer came back in writing as a no. Doesn't this contradict the 1 m boundary rule, or have I missed something?

As far as I am aware the issue of being within 1m of a boundary only applies if the pitch of the roof is over 2.5m.

The 1mt thing is to do with building regs, which is a different issue. Has to be built from mainly non combustible materials if within 1mt of the boundary.

As for my workshop, it's been on hold due to the weather and me developing a chest infection which in turn led to an ear infection.

Managed in the last two weeks to get the walls up and get the roof on but then it turned too cold for the concrete floor to be laid, so waiting on a thaw and my bricky mate having the time to come and help me lay it. Then i can get the doors on and start to use it finally. My house is rammed with tools and rammel at the moment.

I decided in the end to put a pitched roof on mine and consequently went over the allowable 2.5mt height. I'll deal with the consequences if the planners turn up, but i doubt they will. Just couldn't live with a flat roof and the height restrictions.

Will get some photo's up when i get round to it.
These are my principles,if you don't like them ,i have others.

By woodfarmer - 15 Oct 2013, 11:49
- 15 Oct 2013, 11:49 #806584
Years ago I put up a 20 x 10 foot shed. I rang my local council and they said provided there was no glass within 1 metre of the boundary and it was 5 metres from the house I did not need planning or any other permission. this was in a letter which I then kept with the deeds of the house. Interestingly it did not affect my rates either. No doubt things have changed. I had the devil of a time getting PP to build a poultry house and greenhouse here in France, but after arbitration it went through ( very grudgingly by the Mayor). He even as a last ditch attempt to stop it tried to get it included in industrial agricultural buildings, but my replies to the 18 page "dossier" made a complete nonsense of it and I know he did not send it off as I handed in the reply and got the permission the following morning.
A wise man learns from his mistakes: a genius learns from other peoples mistakes.

Steve
You do not have the required permissions to view the files attached to this post.
If it turns i will have it on my lathe.

I would like to add the following diagram from the Scottish government guide to permitted development. 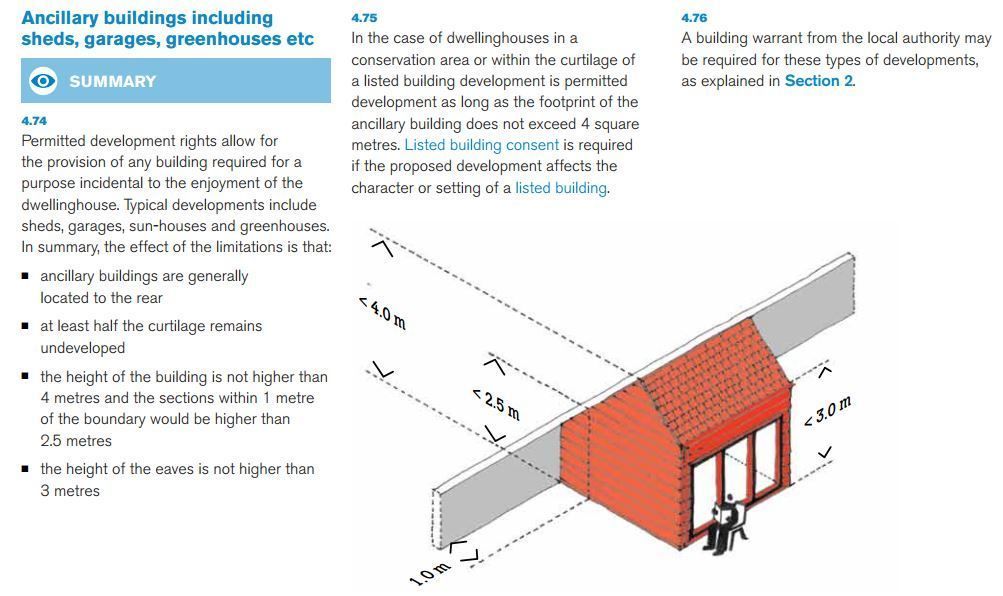 This suggests to me that even if you are within 1m of the boundary you can still have a higher workshop than 2.5 m. Of course this might only apply to Scotland, but I thought it was interesting and goes against the common conception that you have to be 2m from the boundary to enjoy high headspace.

mods- I hope I'm not breaking any kind of copyright pasting that page from the government document!

Planning Permission
Assuming you're doing something straightforward (that is, not building forward of your house, not having a veranda/balcony/raised platforms, not building over half your garden, not in a conservation area/National Park/AoNB/World Heritage Site, etc., not a listed building) then the only requirements to avoid Planning Permission are:
PP1.JPG
PP2.JPG
PP3.JPG
So if you wanted: 2 storeys; or a 3.5m high dual-pitched roof; or 3m high near the boundary; you'll need to apply for PP. Otherwise it's within 'permitted development', not needing planning permission.

Building Regs
Assuming you're doing something workshoppy (that is, no sleeping accommodation, not a garage attached to a home, not a carport) then the main requirements to avoid Building Regs are:
* The exact definition seems to vary between local authorities.
BR1.JPG
BR2.JPG
BR3.JPG
So if you wanted: 35 sq m floor area; or a 25 sq m timber worshop 0.5m from the boundary; you'll need to comply with BR. Otherwise Building Regs will not normally apply.

N.B. This is my interpretation of the Planning Portal guidance - please let me know of any errors, and do your own research first!
You do not have the required permissions to view the files attached to this post.
Small Workshop WIP

By bobblezard - 28 Nov 2015, 22:27
- 28 Nov 2015, 22:27 #1012516
Some years ago I built a 12x8ft timber workshop in my back yard, less than two metres from each of two boundaries. Height was less than 2.5M, Following a complaint from a neighbour I had a visit from a planning officer who agreed it was permitted development and provided a letter to that effect which came in handy when selling up.
Now moved into a new place and, as neighbours overlook the garden, am planning a covered walkway with a seating area looking back into the garden, this will be open on two or three sides does anybody have any experience of such structures and whether they need PP or to meet building regs? I will probably consult the planning office but thought I would ask here first
Do something, because what you do defines you...

Non-combustible materials would be brickwork, blockwork or concrete.

'Substantially' would be defined as the walls being built of these materials but doors, windows and the roof structure (with a suitable covering) could be timber if required.

If it is within 1m of the boundary at any point and constructed of timber then you would have to apply for Building Regulation approval and walls within 1m of the boundary would have to have the requisite fire resistance ie 30 minutes. The board below (http://www.insulationshop.co/versapanel_cement_bonded_particle_board_10mm.html) or one similar would be used on the external face of the wall and a plasterboard on the inside face. Only the walls facing the boundary would need this fire resistance. Flooring etc is your choice and if the building is detached and classed as unheated then the insertion/use of insulation is up to you.

I don't want to bother with building regs approval, but want more than 15 sq m, so will plan to keep at least 1m away from the boundary!
Small Workshop WIP

Also, this depends on each LA but they generally don't go out looking for people that have breached planning and building regs. It only usually becomes and issue if you get grassed up from a neighbour or when you come to sell your house and you have to legally declare any building works within a set period.

So, if you're unlucky enough to be grassed up then the council are obligated to investigate and how you deal with it from this point is important. If you play ignorant but say you'll meet all the relevant breaches then they're happy because it's problem solved. If you resist then they have to consider enforceable action and serve an enforcement notice. These enforcement notices don't come without very careful and consideration from the LA as they have to go up the ranks and be signed off by the principle planner mainly because they have to consider the very expensive costs involved with proceeding to court. Whether it's a simple shed breach or a property built without planning permission, the courts charge a initial set fee, along with the legal teams - of course, the complexity of the case increases costs so we can assume that a shed would be far less than a property, but you get my drift. The judges also don't look favourably on LA's that bring trivial matters to the courts. Generally, judges don't like precious court time being wasted by people that can't act in a sensible manner, which also includes taking legal proceedings for minor offences, such as a shed that built too close to a boundary or is a little taller than the regulation allow.

It's luck of the draw and depends how much balls you have - or maybe, how much you're taking the water - don't build a habitable space in the back garden that blows all the height, space and location restrictions totally out of the water and expect to get away with it - but a small breach in the laws might see it being overlooked with no further action being taken (even an official letter from the LA that says as such!)

Now, I'm not a planning officer but I have had first hand experience with a breach of planning and I've spoken at length on numerous occasions to the enforcement officers about what tricks some people pull and how most LA's resources are stretched beyond capacity. I also recorded all my conversations with the enforcement officers, just in case.....

So only you know what location you're in and where you're planning to build, how long you think you'll be living at your property, how well you get on with the neighbours, what type of risk you're prepared to take and what you're thinking of building that might not fall exactly within the regulations.

For a flat/single pitch roof it's a max height of 3m and 2.5m to the eaves.

I'm still not 100% on the definition of eaves and I've seen different suggestions.

IE, can I have a single pitched roof that starts at 3m and goes down to 2.5m so that inside (if I wanted) there would be circa 2.7-2.2m of headroom once the beams are i place, as shown in kdampneys image?

By MikeG. - 26 Nov 2017, 13:43
- 26 Nov 2017, 13:43 #1188639
The eaves in planning terms is the height of the imaginary intersection of the plane of the wall and the roof covering. So imagine laying a piece of wood on top of the roof at the verge, and having another pressed up against the wall. Where they would overlap (on the underside) if they could is the height of the eaves.
Acquire skills, not tools.