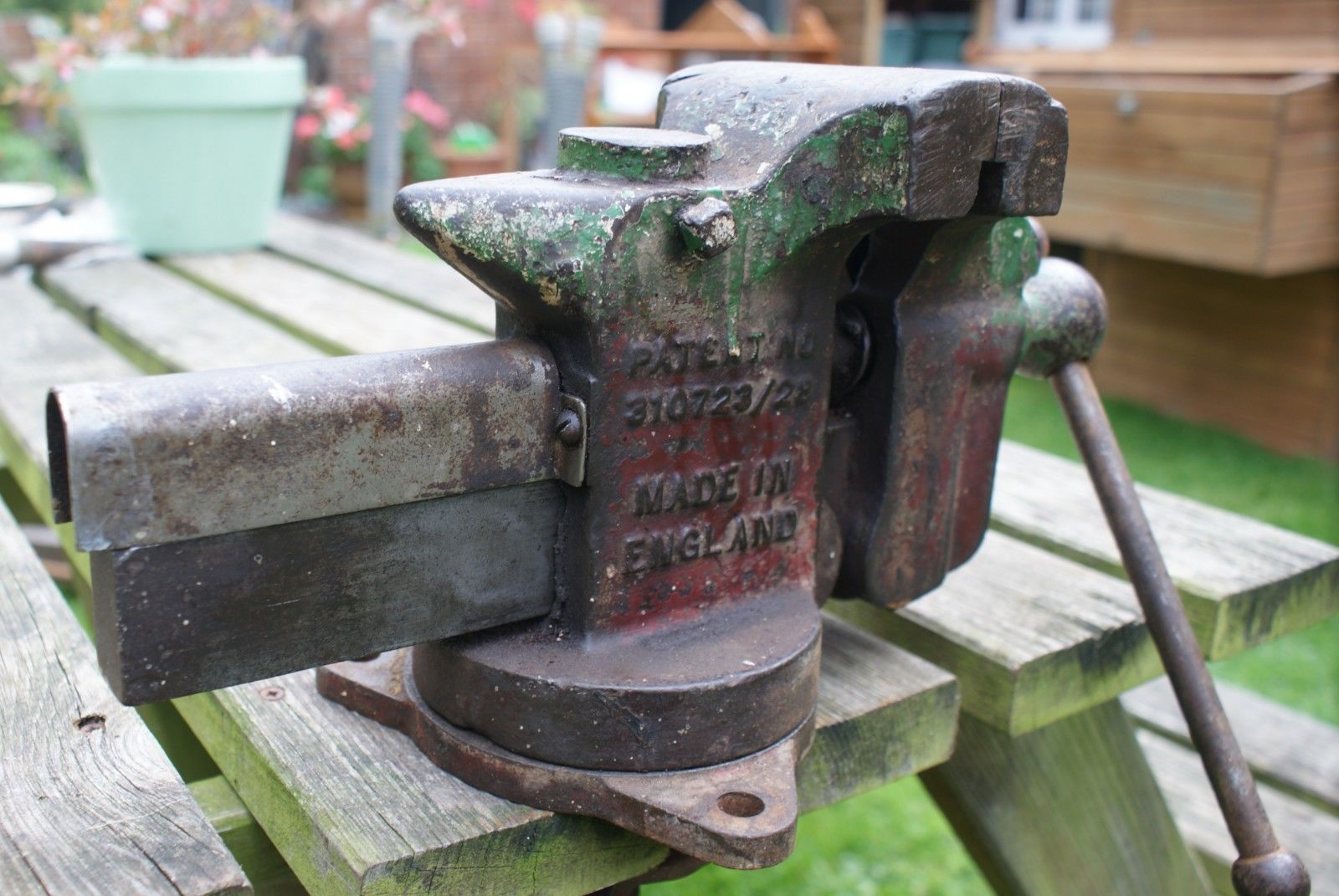 A record 74 vice - a bit grotty but in good condition, the only minor issue being that at some point the pin that retains the washer/spring used to hold the handle against the moveable jaw had broken and the washer bent as a result. Once extracted a few whacks with a hammer got it back into shape, and an old nail did as a replacement pin. 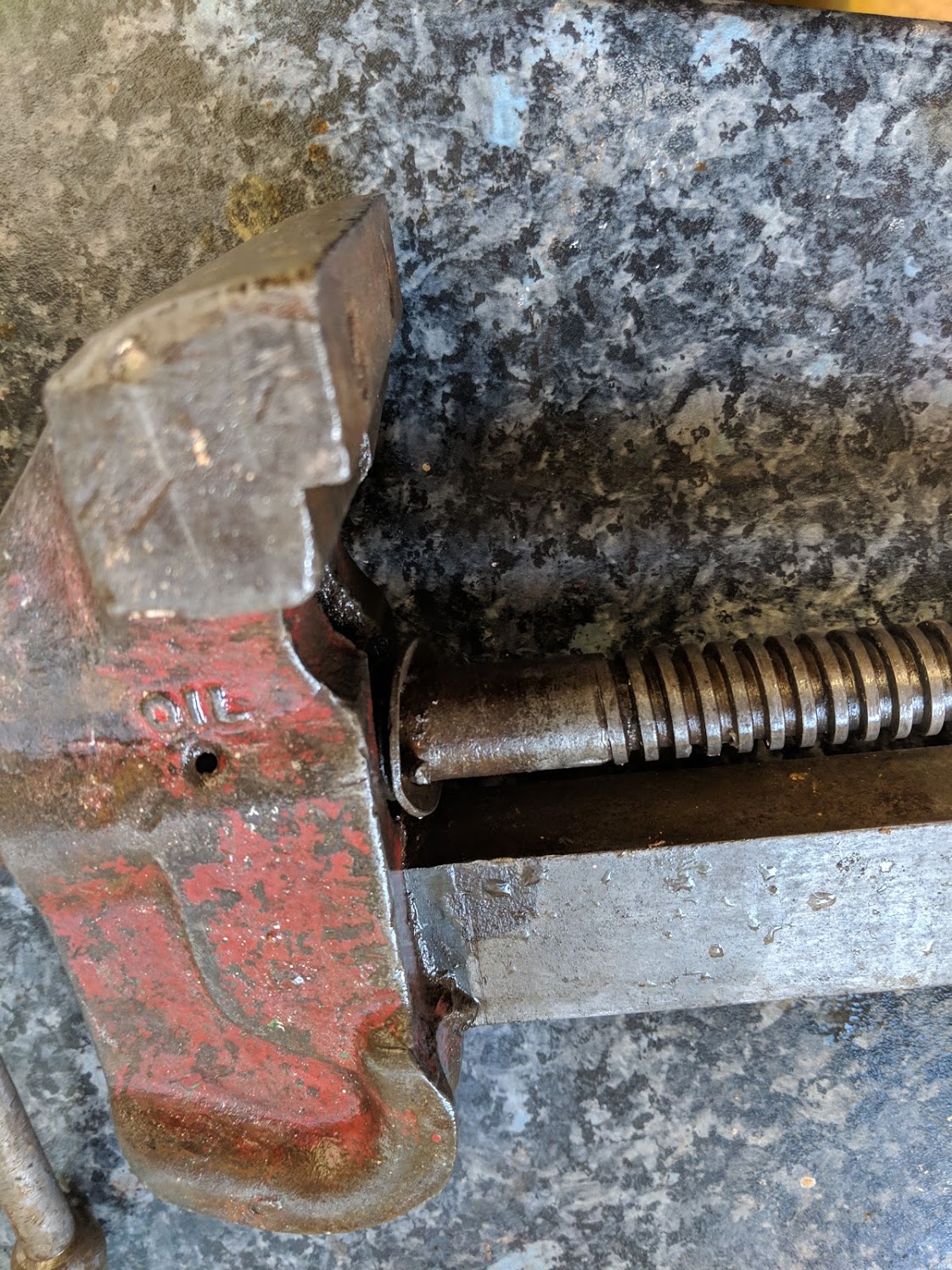 Having got it apart a bit of elbow grease to remove 80 years of accumulated oil and grease plus various layers of paint (not sure why it was partly painted green - perhaps to distinguish it from others in a shared workshop?) and it looked like this: 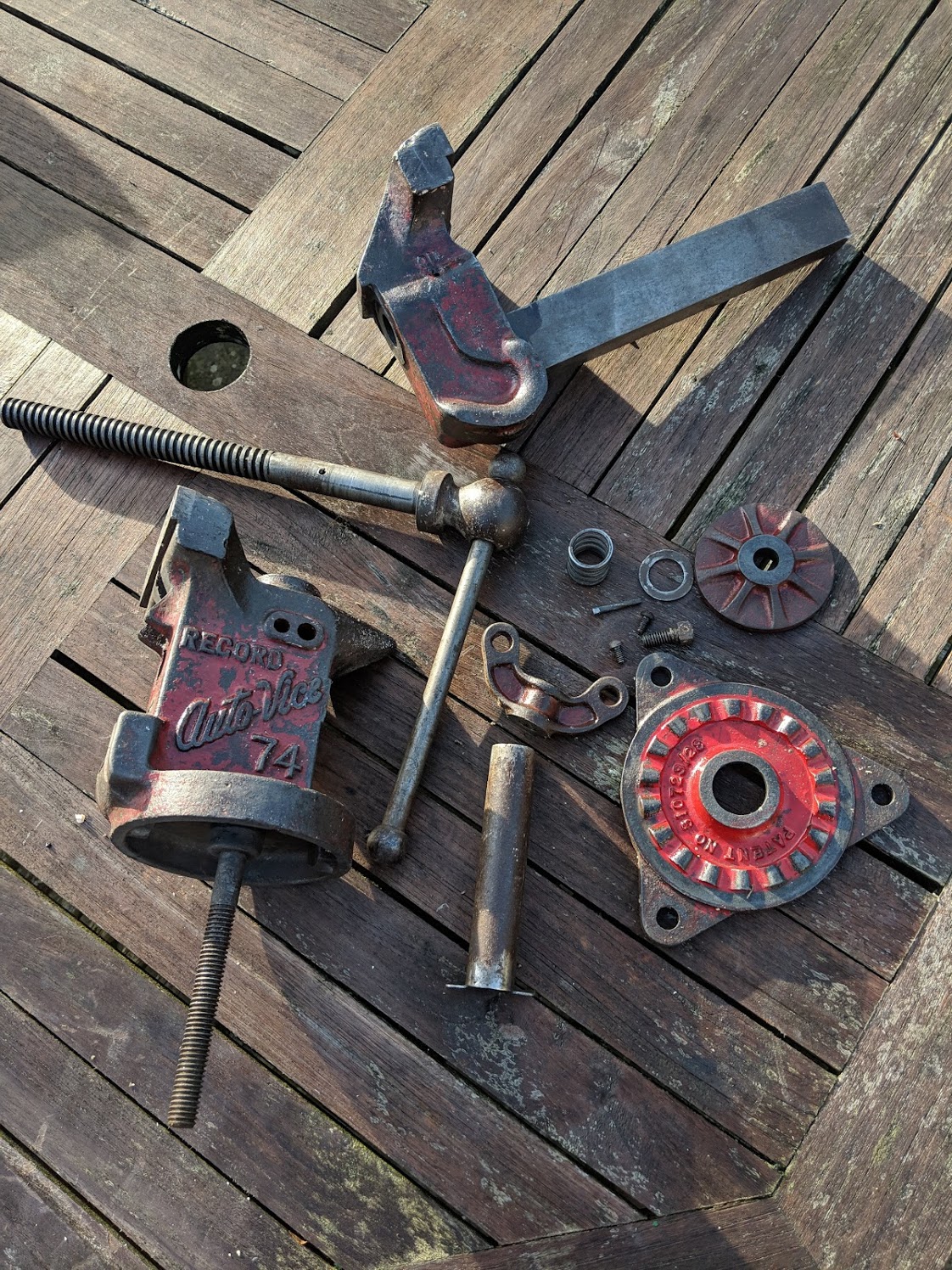 this version has the patent date on it so was made some time after the summer of 1929 and the late 1940s.
I am pleased to report that - as with all Record products of this era - the quality is excellent with very well finished castings and a substantial steel slide and screw.

There is an even larger version of this design (the model 75) which in its earliest incarnations was made completely of steel, but the 74 (and later versions of the 75) have a cast iron body.

It is simple to install - 1/2 inch hole through the worktop and secure underneath with the large nut and washer. Here it is installed: 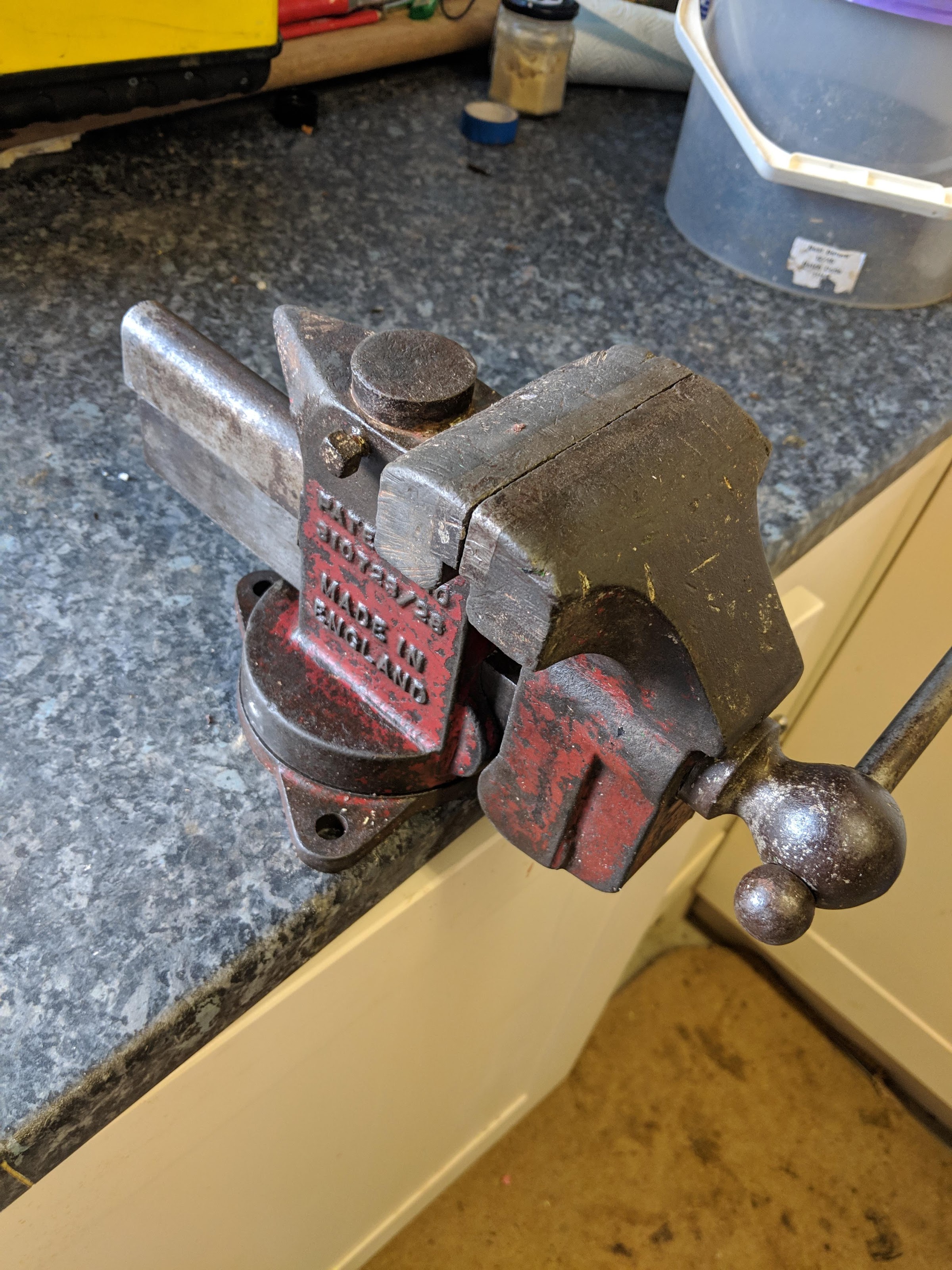 in the next instalment: all those Record 74 features you never knew you needed.

Looking at your photos made me wonder what the square headed set screw was for. On re-reading your earlier posts I see it was for straightening valves, so I'm hoping that by now you have built up a stock of slightly bent valves needing remedial treatment and that some action shots are coming soon!
Andy

third time lucky - they may all be upside down!
Nick blog

AndyT wrote:Thanks Nick - nice job on the cleaning up, leaving it old but cared for, a look I like to cultivate myself, as I think do many woodworkers of a certain age...

Looking at your photos made me wonder what the square headed set screw was for. On re-reading your earlier posts I see it was for straightening valves, so I'm hoping that by now you have built up a stock of slightly bent valves needing remedial treatment and that some action shots are coming soon!

actually it is a set screw to hold the anvil in place - as you can see in the patent drawing below the anvil has a stud that is located in a hole on the upper surface of the fixed jaw and the screw pushes on that. In theory the anvil is detachable (I suppose for the manufacturers convenience, rather than ours?) but mine is stuck fast.

I can (sort of) see how they might be used in straightening a rod (assuming it was only bent a the very tip!) - can someone more mechanically minded than me explain why you might want to insert an engine valve in there? 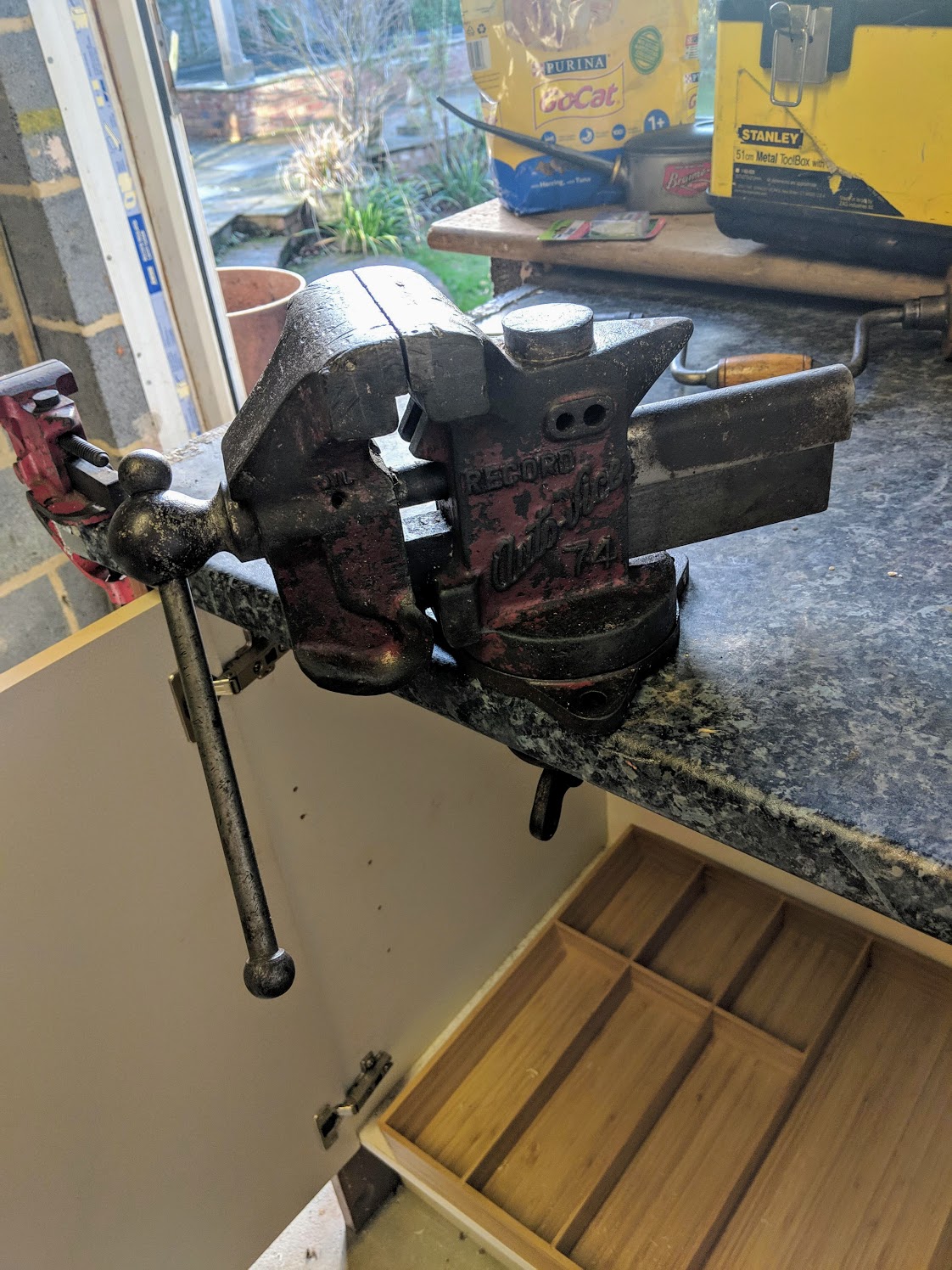 By sunnybob - 22 Dec 2018, 19:27
- 22 Dec 2018, 19:27 #1258324
engines of that age had soft steel valve stems, with hardened seats. if a valve spring or collet broke under load it was common for that valve stem to bend under the unusual pressures.
Hammering the soft valve stem back into the slot with a rawhide mallet on the valve face would allow the valve to be reused. I've seen some hammered straight on blocks of wood, just as you would straighten a bent nail for reuse.
Not exactly formula one , but back then any engine could be fixed in any local garage, instead of waiting for a new part to be shipped from japan or even china.
SunnyBob
my projects can be viewed here
http://www.pbase.com/john_cooper/bob_co ... k_projects

pipe bender: this consists of the curved section at the base of the movable jaw and the vertically grooved lug opposite on the fixed jaw (see the picture above ). The pipe is gripped between the grooves of the two lugs and can be bent around the curved part.
The jaws are offset so as to not interfere with the pipe. In the earliest adverts the pipe bender is described as 'adjustable', but I have no idea what this refers to.

Incidentally, I actually used the pipe bender on my Record Imp to bend a metal brake tube in the summer - technically it would have been possible to do the same with my fingers, but I am sure I did a far better job thanks to our friends at Record!

swivel base - the underside of the fixed jaw has two tabs which sit in the 9 pairs of notches in the triangular base - simply loosen the monkey nut lift the vice and twist to a new location.

the vices were supplied with two added extras:

fibre jaw grips for gripping delicate items (good luck finding a vice where these have not already been lost!)

Cylinder head holding plug (automotive related!): a hexagonal rod with two screw threads designed to insert into the threaded cylinder head holes that received the spark plugs (one for US plug thread and one UK). These have of course all been lost also.

Finally there was a pipe gripper - this consisted of a removable v-shaped metal part with a serrated edge that fits in a groove in the moveable jaw, below the grip. The casting on the other side is v shaped and has a slot which receives the other metal part allowing the vice to fully closed even when the removable part is installed. According to the patent the removable part was originally designed to be held in place by a set screw, but this is absent from the actual implementation. This no doubt explains why they were all immediately lost. It would be a simple job to make a replacement should you wish to loose your own. 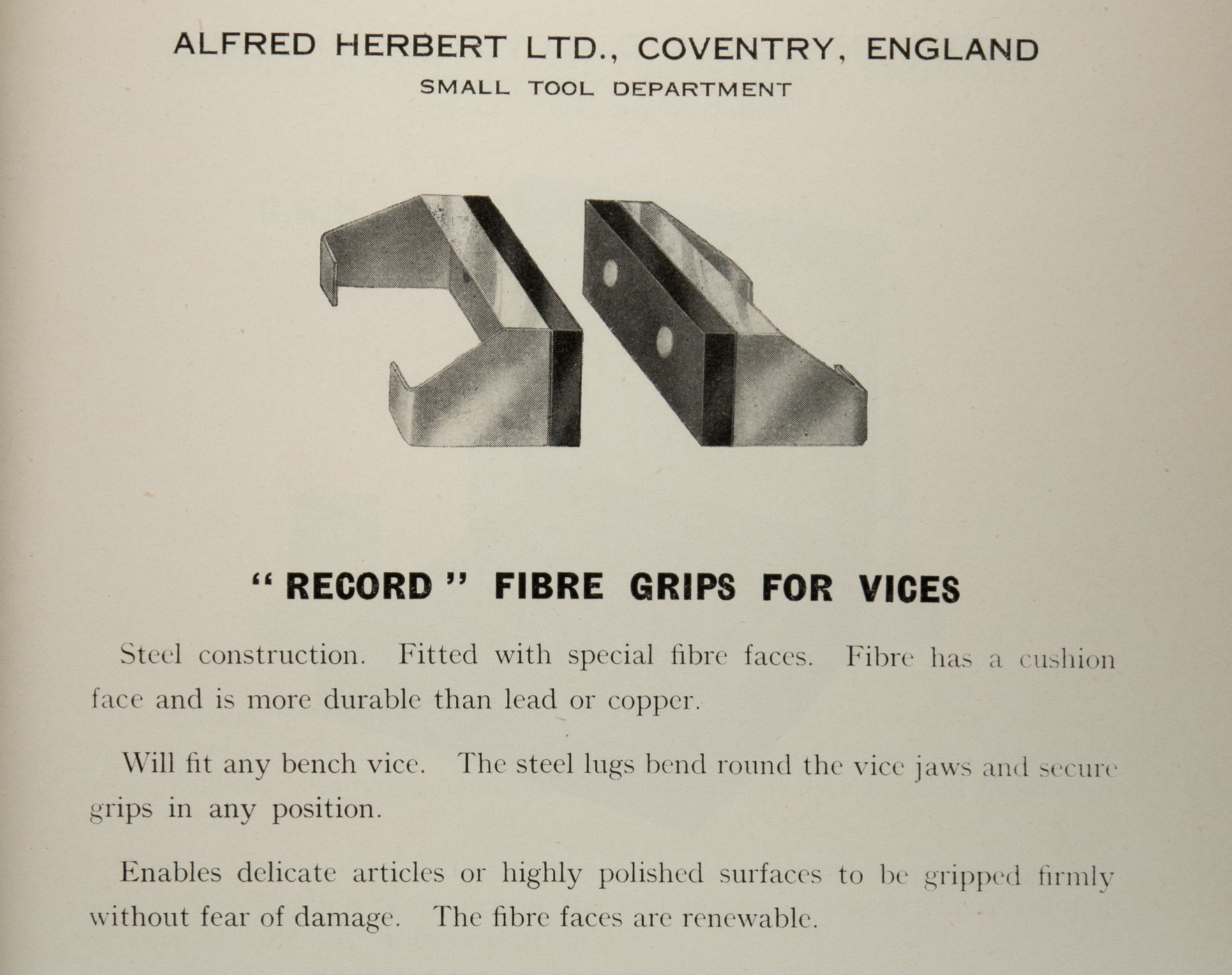 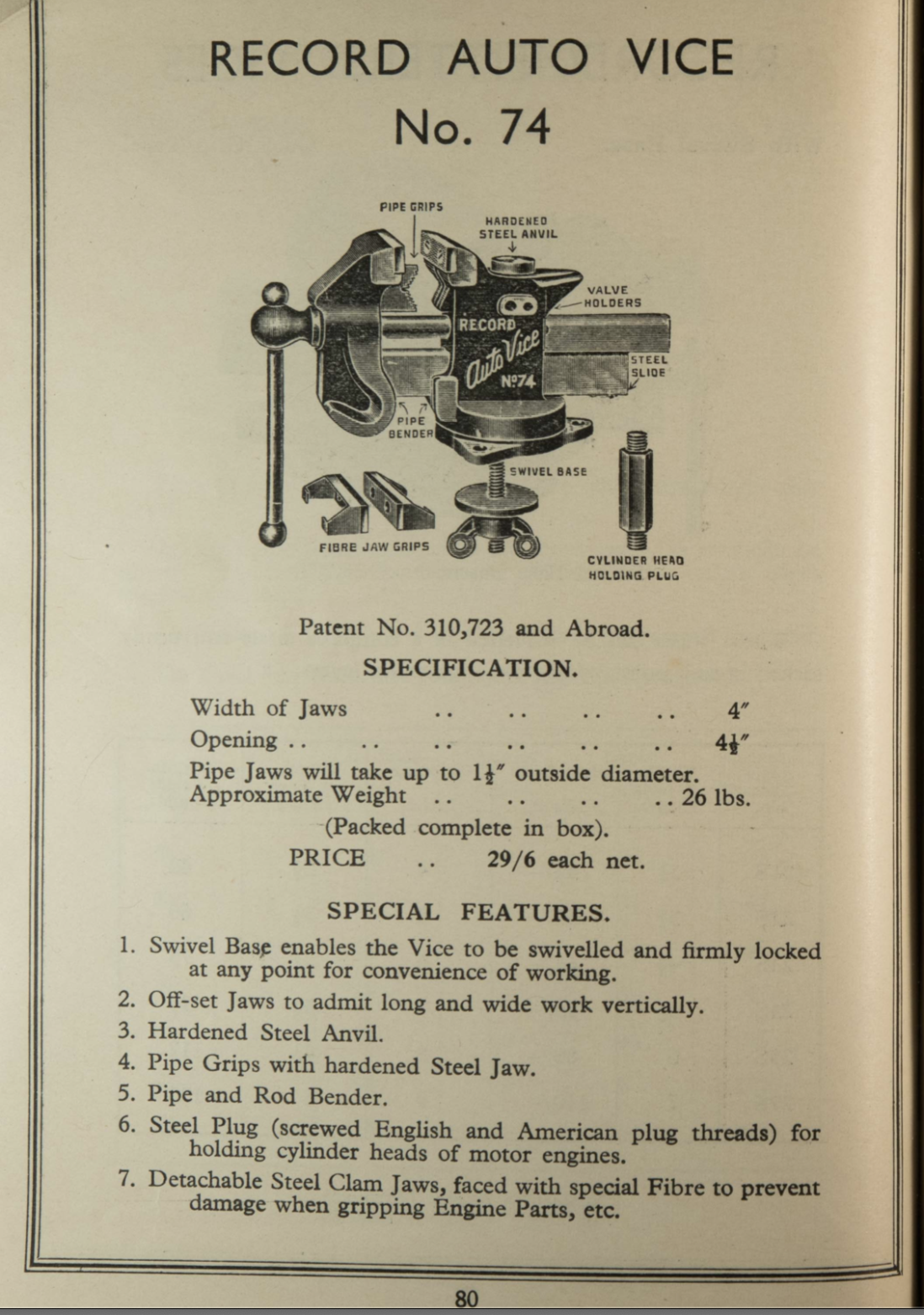 It is pitched as an inexpensive vice for the amateur mechanic or the woodworker who has an occasional need to do a bit of metalwork (where the fact it can be popped into a dog hole on your bench and removed after use is an advantage) and, if the Record marketing maestros are to be believed, was a popular choice in factories and mechanic's workshops up and down the country.

Mine was £62 delivered and, cosmetics aside, is in perfect working order. Pretty good value since it should easily be good for another 80 years at least.
Nick blog 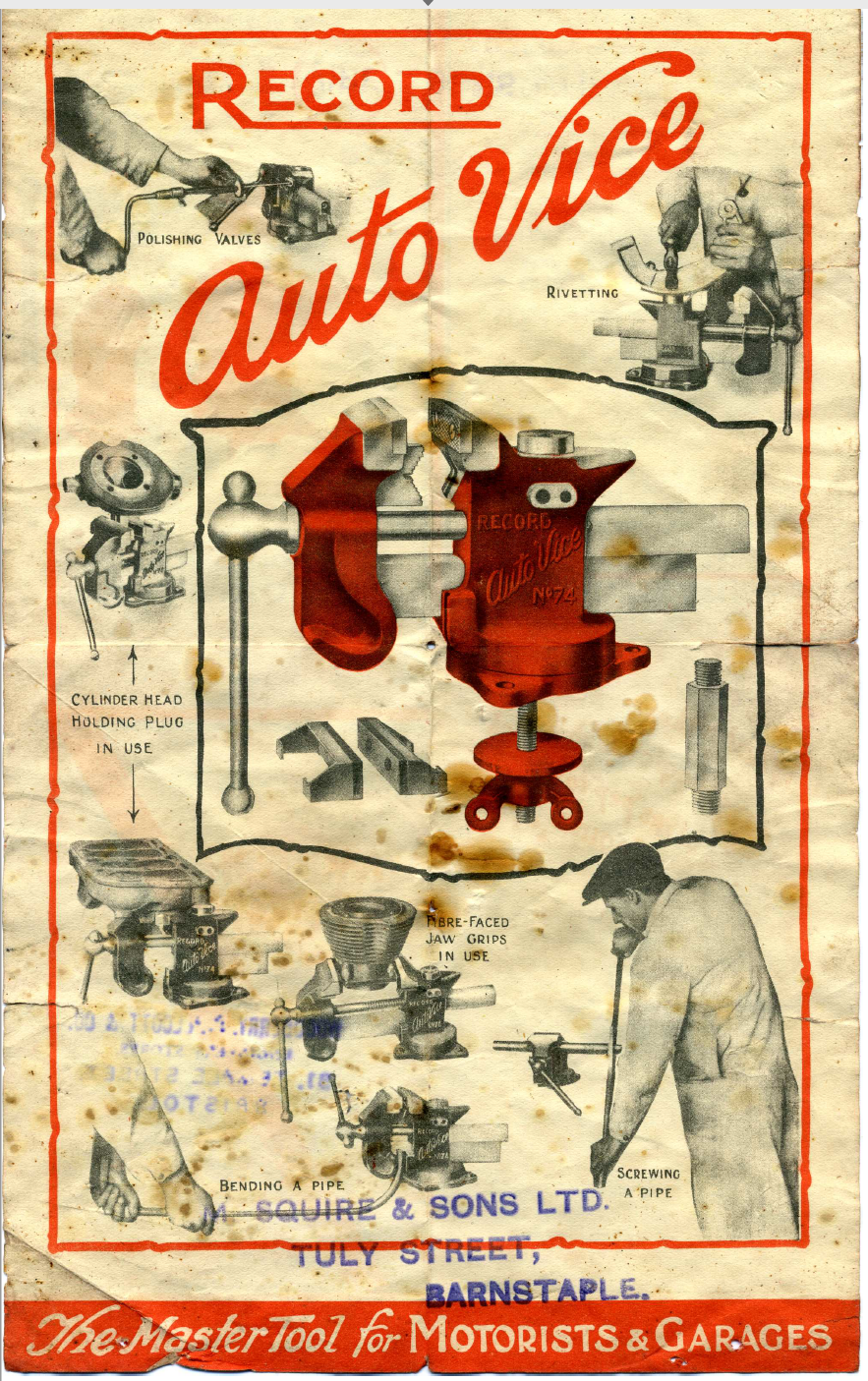 note extra use of the valve holes: pop one end of your valve into a brace, the other into the valve hole and - hey presto! - a valve polishing device.
Nick blog

Matter of interest though, how deep are the valve stem holes? They should be several inches, if not all the way through.
SunnyBob
my projects can be viewed here
http://www.pbase.com/john_cooper/bob_co ... k_projects