Adventures in metalwork and machine restoration!

Re: Adventures in metalwork and machine restoration! #1285333

Great job, do you happen to get your threadlocking compound pre-applied? I'm looking for some grub screws and other fixings that come with a pre-applied threadlock that uninstalls fairly easily, without heat so I can resuse them.
Thanks,
Matty

Re: Adventures in metalwork and machine restoration! #1285353

Here you go,there are different sizes of cups etc. I can take some pics next time I'm spraying and stick them in new thread but I'm sure there are YouTube videos.
The world may have gone completely mad, but my workshop keeps me sane.

Re: Adventures in metalwork and machine restoration! #1285361

Re: Adventures in metalwork and machine restoration! #1285626

Great job, do you happen to get your threadlocking compound pre-applied? I'm looking for some grub screws and other fixings that come with a pre-applied threadlock that uninstalls fairly easily, without heat so I can resuse them.
Thanks,
Matty

Sorry, I just always use a loctite bottle I've had forever.

Did the final few touches to the evenwood - turned a new handle for the rise and fall from yew: 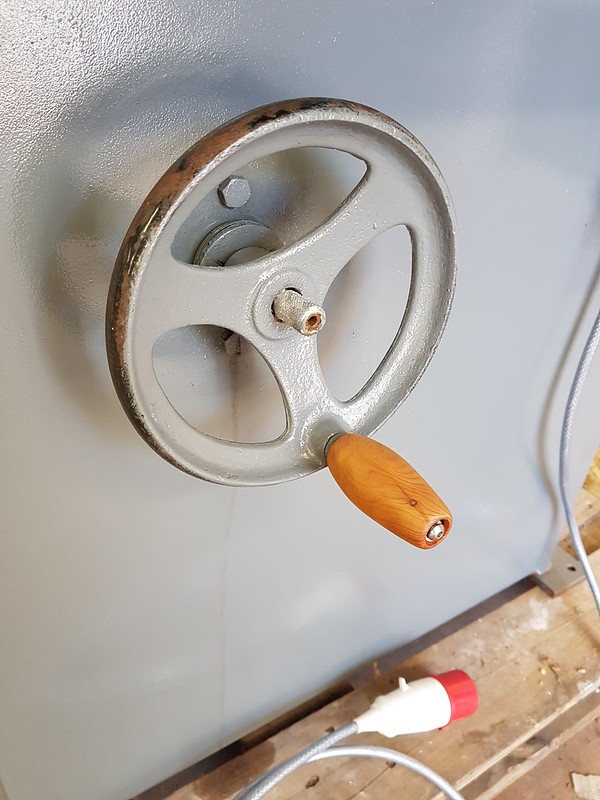 Evenwood saw finished
and got a few pictures out in the sunlight: 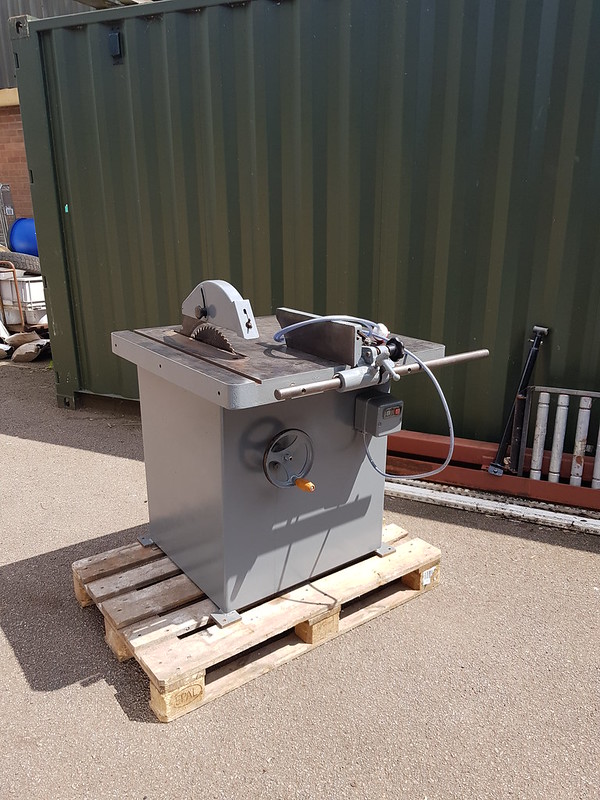 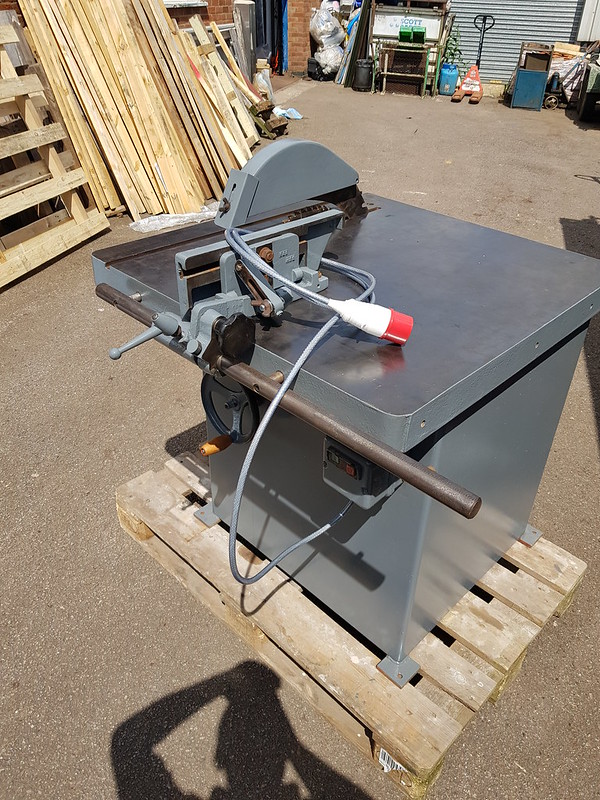 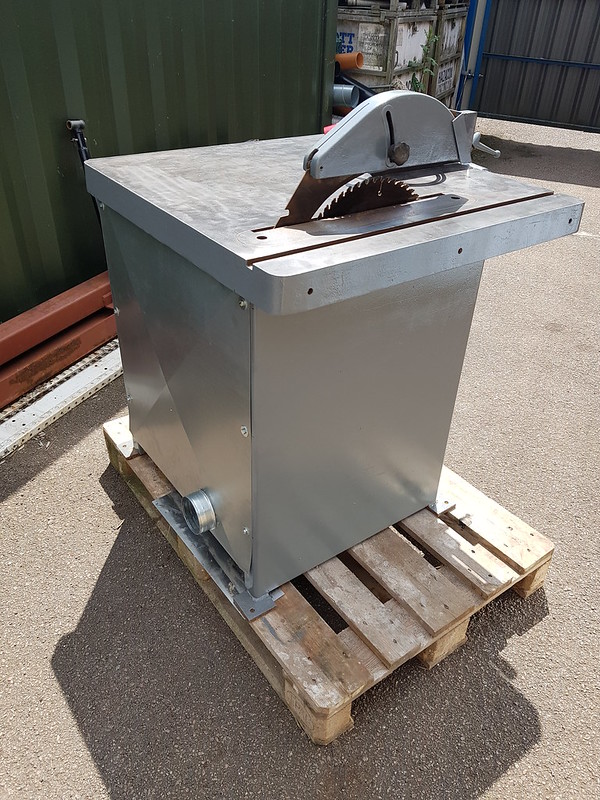 Evenwood saw finished
It's up for sale now (not here though

Re: Adventures in metalwork and machine restoration! #1293235

Inspired by Coleys1 (Pretty sure it was him) some time ago I bought a nice big sawblade to cut something cool into. Had a few ideas but settled on a tree of life style design. I found a suitable image on google and scaled it up: 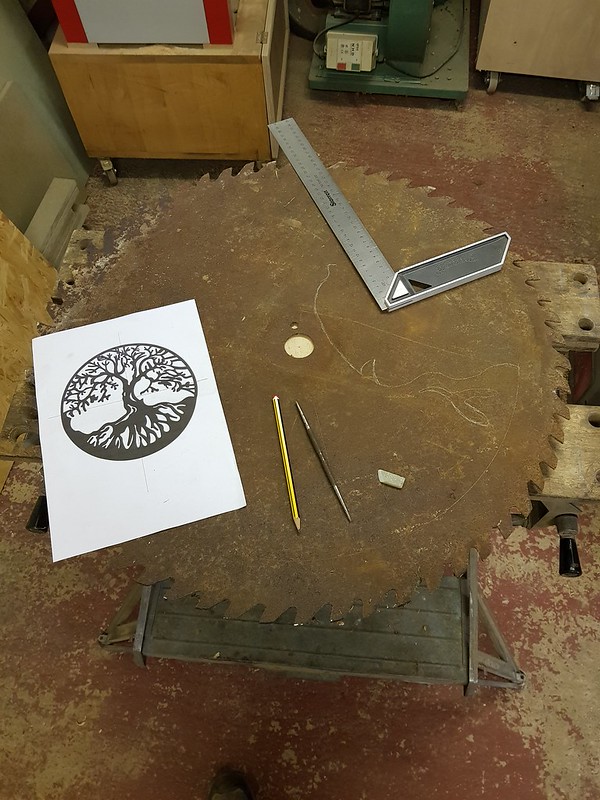 Saw blade plasma art
Went over my french chalk lines with a paint pen so I could see it through the hood: 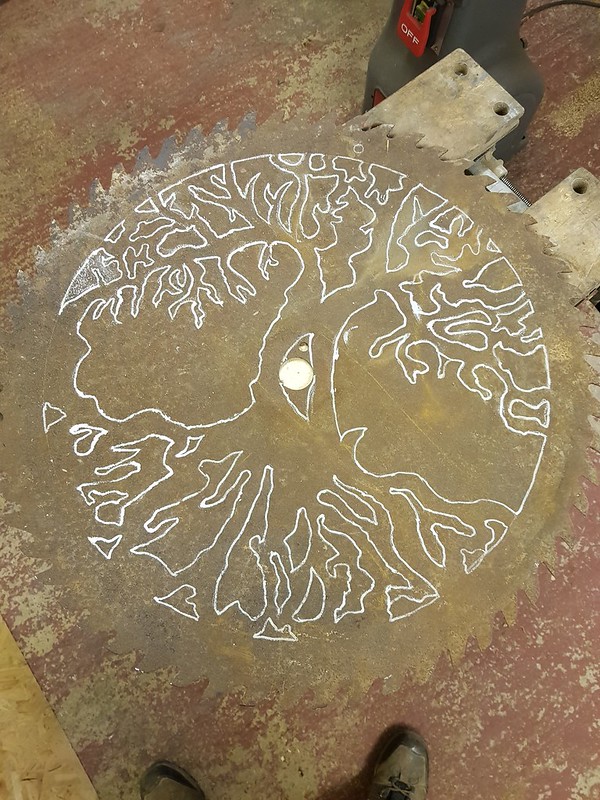 Saw blade plasma art
And got stuck in with the plasma: 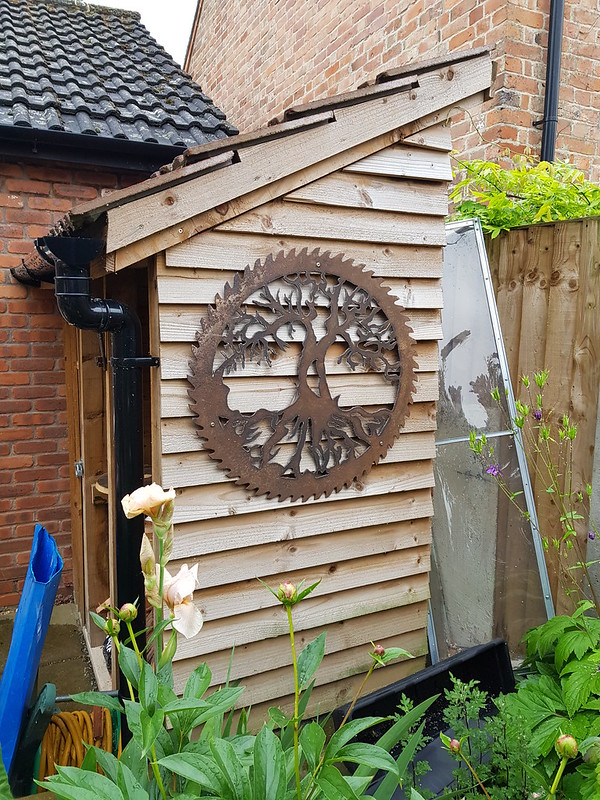 Really happy with the result!
Important lesson learned as well: either do it outside (it was chucking it down) or sort some proper extraction - unbelievable amount of smoke came off it. Within the next couple of weeks I am hoping to address this in a typically over the top way...

Re: Adventures in metalwork and machine restoration! #1293418

Re: Adventures in metalwork and machine restoration! #1293419

Re: Adventures in metalwork and machine restoration! #1293649

You've got some nice sized offcuts there to make a couple of knives out of if you were that way inclined, probably some decent steel in one of those old blades. I imagine most of the smoke you were experiencing when plasma cutting the shapes was actually rust burn-off more than the actual cutting.
"It is quite wrong to consider that only hand-workers are craftsmen, the only difference between the old craftsmen and the new is that the former used hand-tools and the modern craftsman uses mechanized tools." - J.Raymond Foyster, 1963

Re: Adventures in metalwork and machine restoration! #1293663

I had to cut the big sections up so they would drop out - with so many small shapes they were hanging up when I tried to leave them big.

Next project was a really cool vice I got on ebay. Its a German Leinen, the rear jaw slides in dovetailed ways and the screw is completely enclosed and protected in a tube. Really neat design. Took it to pieces and found the jaws should have an insert bushing to keep them secure. There was only one left for some reason, so at least I had something to work with. Turned up 3 new bushes from an old bolt and made some new counterbored cap screws to hold them on with (chucked them in a battery drill and ground them down on a bench grinder - works a treat!) 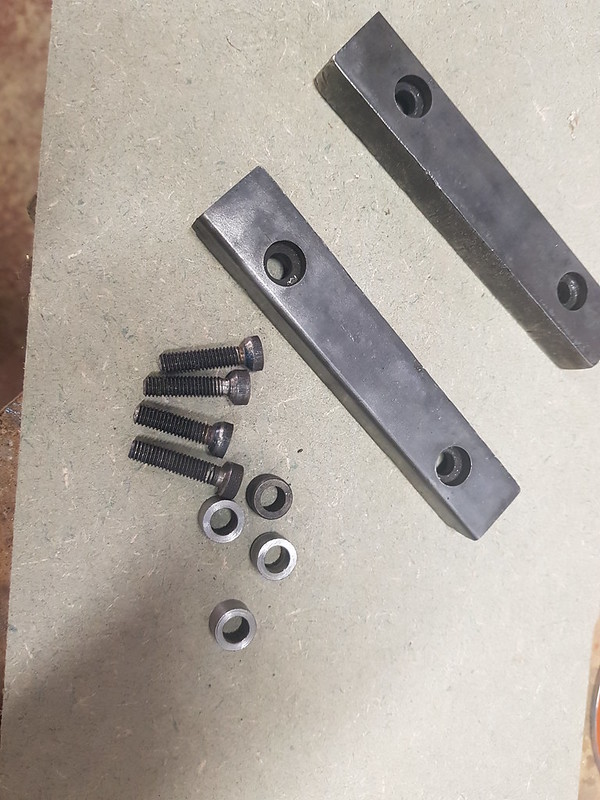 vice jaw inserts
Forgot to get any other pictures, but here is the finished article: 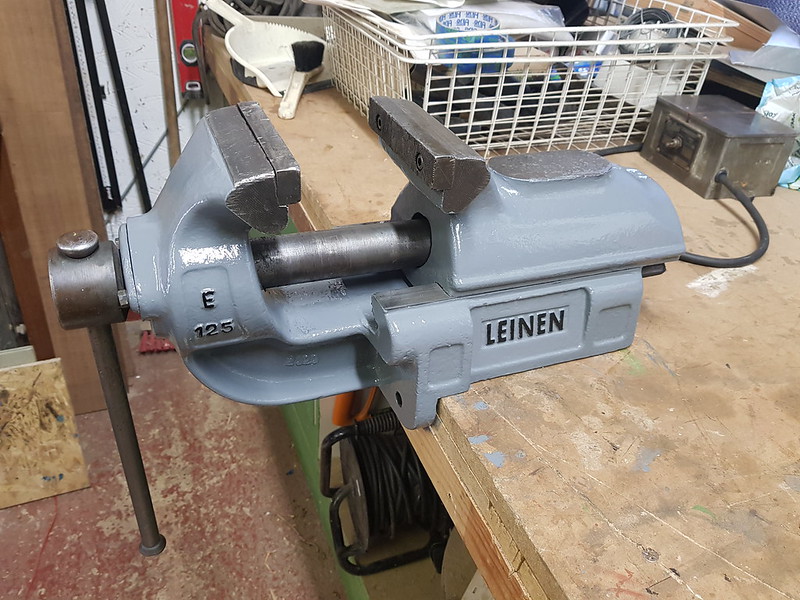 Leinen Vice
Using it is really weird at first - kind of like when you're on a train and the one next to you moves. I've moved it onto my bench at home in favour of my big old record so wel'll see how I get on with it. After this being the only one I've ever seen I picked up another, slightly smaller one off facebook this week.

Re: Adventures in metalwork and machine restoration! #1293664 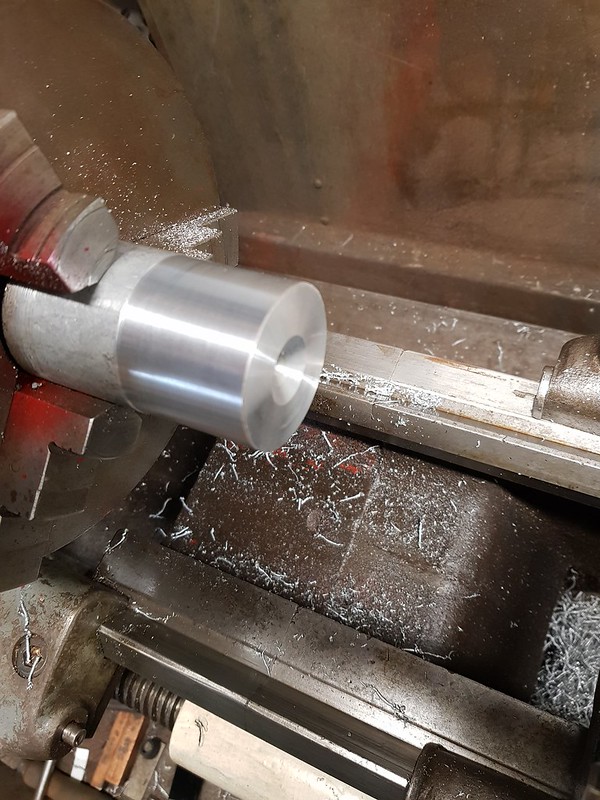 machining thread protector
Turned, drilled, bored and threaded (I cheated and tapped it, didn't fancy internal threading up to a stop for my first go at threadcutting. Its a 6tpi thread so its moving pretty quick) then I knurled it -this didn't come out as deep as I'd hoped. Need to work on that next time. 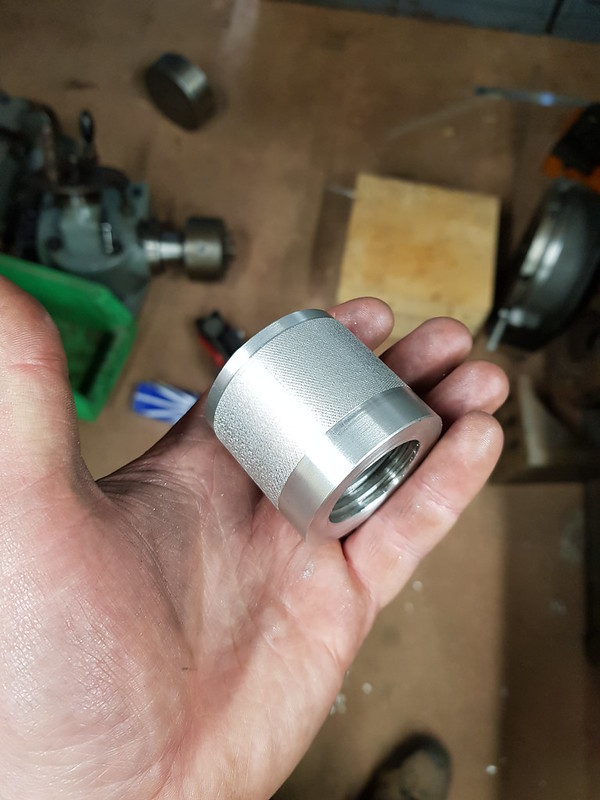 thread protector
Then I turned up a top cap, bored in the middle. Marked it up and drilled and tapped it in the mill: 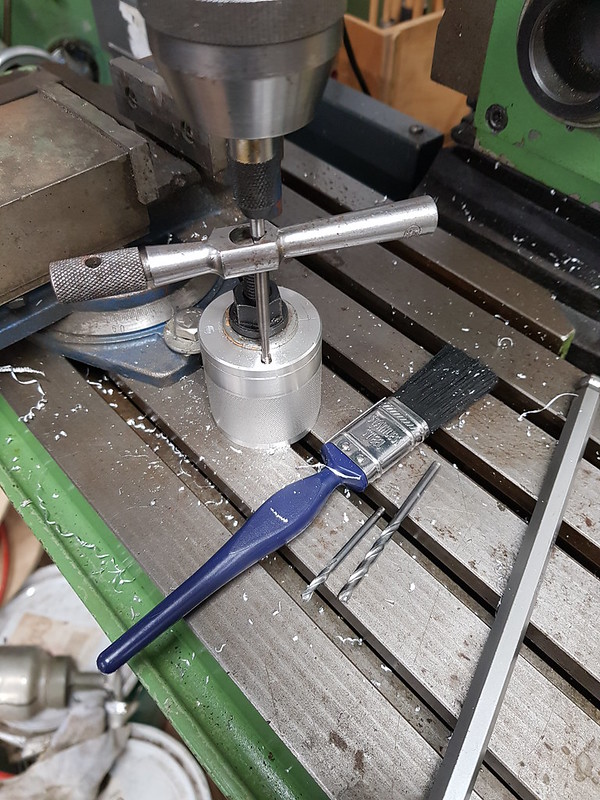 And the finished article: 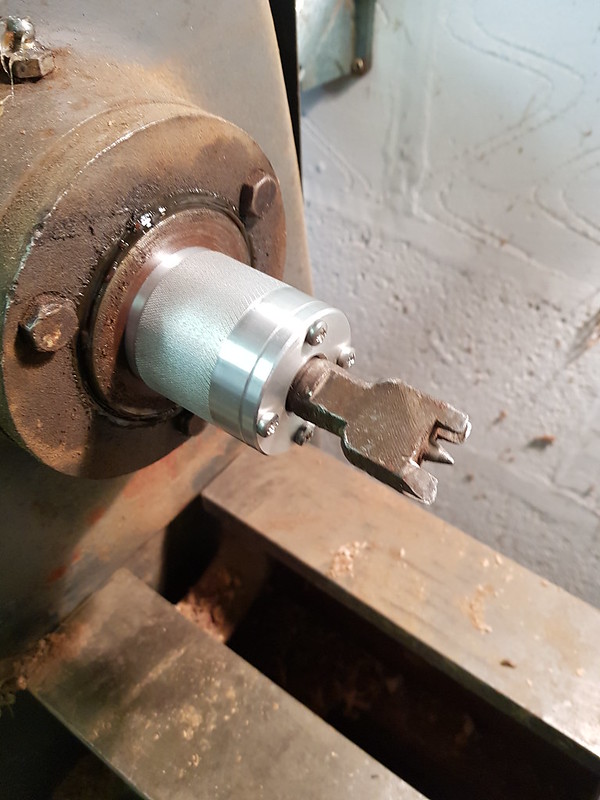 thread protector
Worked first time. Chuffed is not the word!

Re: Adventures in metalwork and machine restoration! #1295119 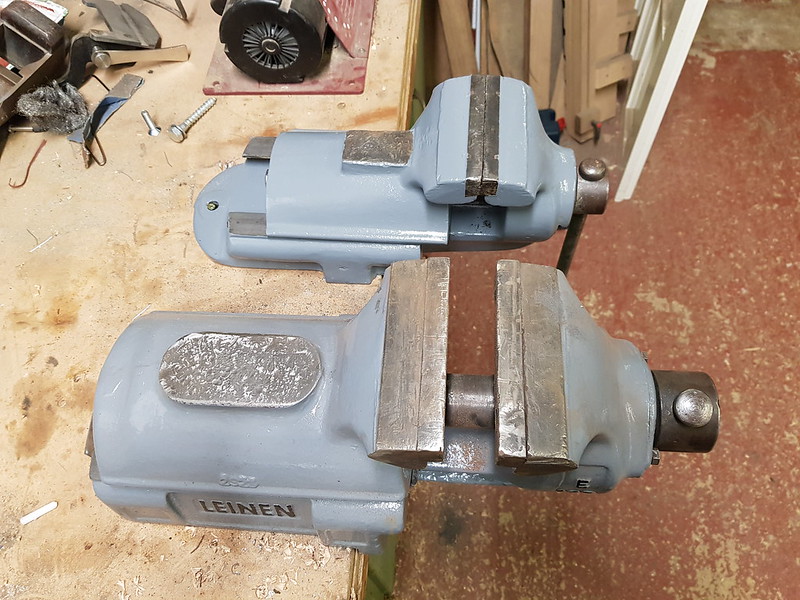 Vices
And my dad picked up a 3rd on a recent trip to holland! 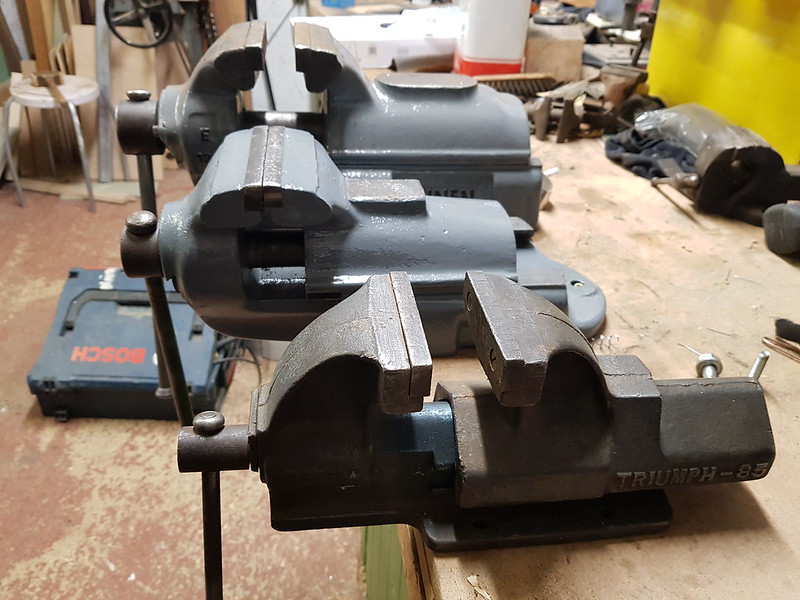 To round off this session of vice restoration, a machine vice I picked up recently, hot off the production line. The moving jaw pivots - nice for holding irregular shapes. I'll probably stick this on one of the mills at work for now. Just need to turn a suitable handle instead of the quality 6" bolt it was supplied with 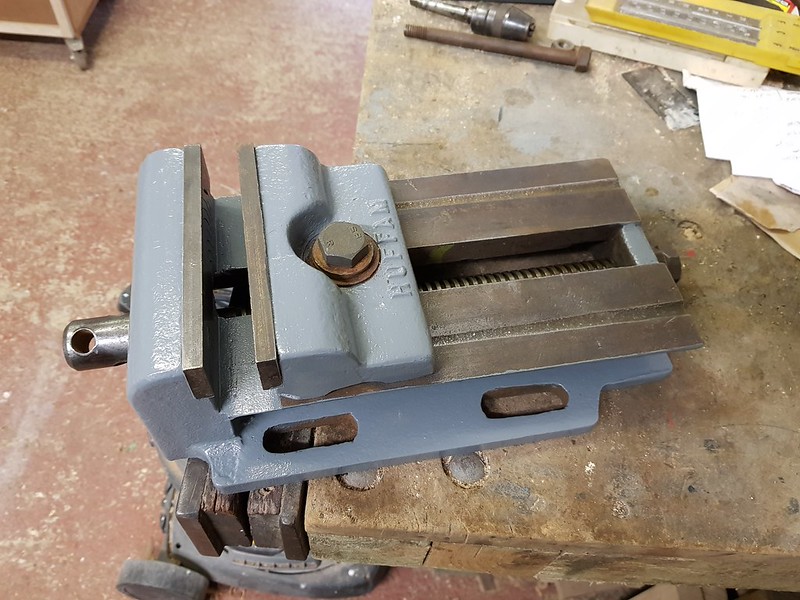 Re: Adventures in metalwork and machine restoration! #1295340

By TFrench - 15 Jul 2019, 21:48
- 15 Jul 2019, 21:48 #1295340
Latest part of my highlights reel is the Deckel GK21 pantograph. Back in Febuary I spied this on ebay and as they've always interested me I stuck a bid on it, not expecting to win it. Whoops. (Mrs F is very understanding) Getting it in my van was an interesting experience with the sellers ancient tractor forklift thing, and we also bent a cover plate with the strops (more on that later) but at that point I just wanted it to stop swinging around and get it strapped down in the van! Getting it back out of the van at home was thrilling too, pretty much maxed out the engine crane, but it all turned out ok in the end

Here's how it looked when I got it back: 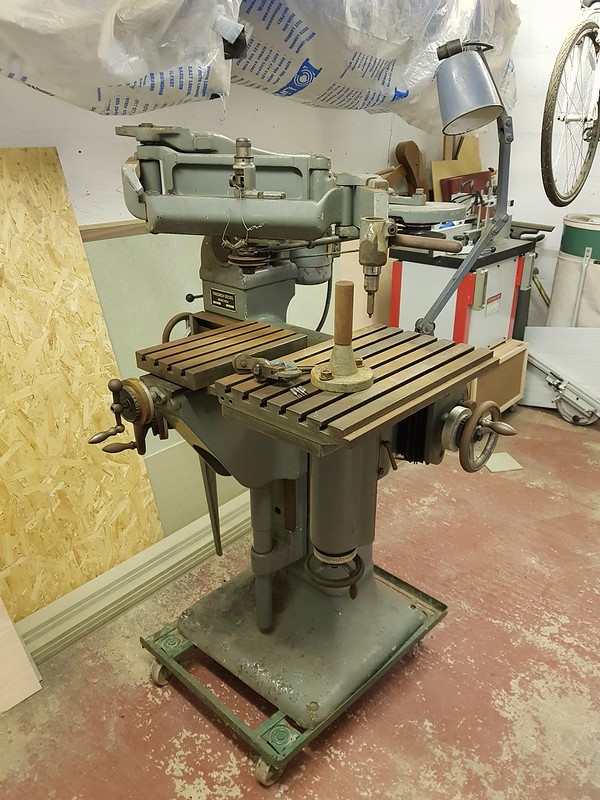 Deckel pantograph
I've steadily been working my way around it ever since - whenever I get a free hour in the workshop I'll derust/clean up the next section. 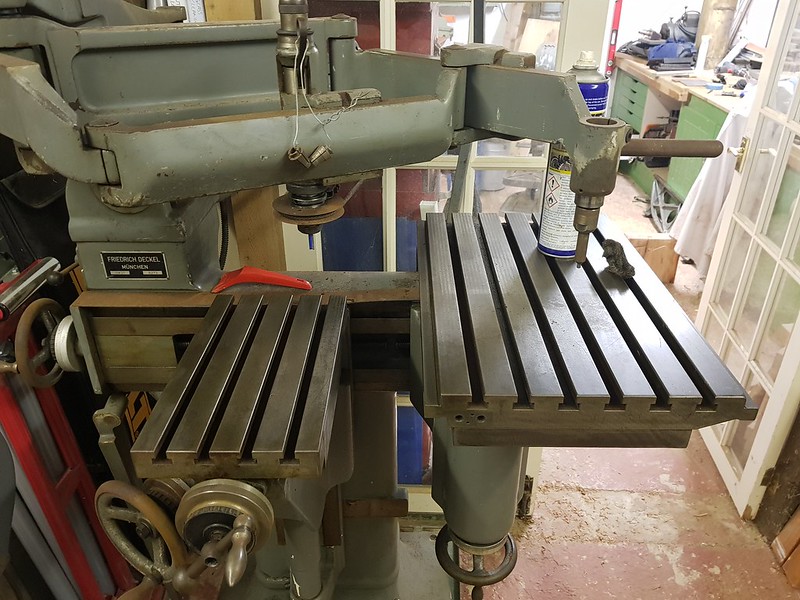 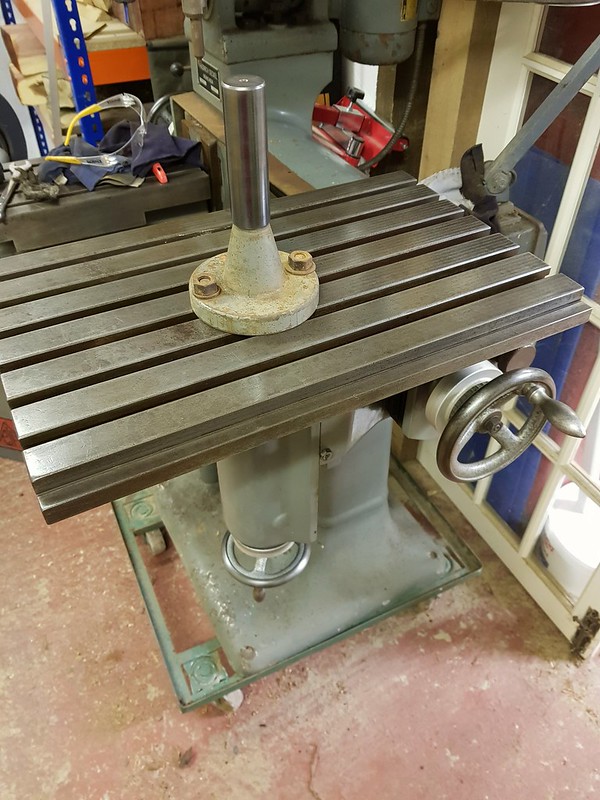 Cleaned tables
It was covered in the black gunk that drops off ivy, but apart from some light surface rust its in really good condition. The paint has cleaned up really nicely - apart from a few chips on the base its almost perfect. In the pics above you can see the rusty strip that goes along the top of the leadscrews that looks a bit bent. The tension of the strop snapped 2 of the M4 countersunk screws holding it on and bent it about a bit. I've been dreading having to get the screws out but it turned out to be really easy. I used the sharpest, thinnest puch I had and made a punch in the top, then just drove them around and around with the puch. Easiest bolt extraction I've ever had! (I'd bought left hand drill bits and everything, expecting it to be a pig!) Today I made up a replacement cover strip in aluminium, just waiting on the right screws for it now. My neighbour has been for a look at the motor and we've worked out a plan for getting it powered up. Exciting times! 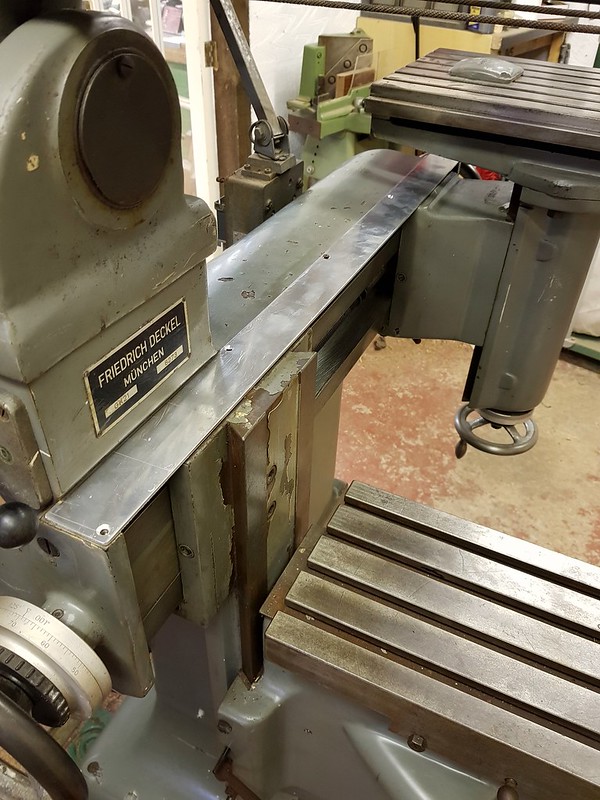 Gk21 cover strip
Ollie Sparks the plane maker has a similar machine that I was going over at Richard Arnold's open day, it really fired me up to get this running - the stuff he is doing with his is incredible. Not that I'll ever be at that level

Re: Adventures in metalwork and machine restoration! #1295342

Re: Adventures in metalwork and machine restoration! #1295345

By TFrench - 15 Jul 2019, 22:17
- 15 Jul 2019, 22:17 #1295345
Haha, should probably have mentioned that! Basically it is a reduction milling machine/router. The right hand table holds a large master pattern which you trace with the pin at the end of the arm. The left table holds the work, and the spindle moves above that. By altering the pivot points on the arms you can achieve reductions from 1.5 : 1 to 10 : 1. They're effectively made obsolete by CNC routers but its still a very cool machine. This one can also work in 3D - I'll get a picture of how that works as its easier than explaining it. 3D printing has recently made them more usuable again as you can very easily and cheaply make master patterns that would have been very expensive before. I recently saw Stefan Gotteswinter on youtube cutting a tiny torx head in a titanium bolt with his one from a 3D printed master.
The "post" thats on the left hand table can be used to lock the arm assembly in place so it can be used as a milling machine as well. The most common use for them was for engraving and die making. I recently went to see a proper die making workshop where they still use these machines - the precision was awesome. They're using cutters with a 5 thousandth of an inch tip. Incredible. 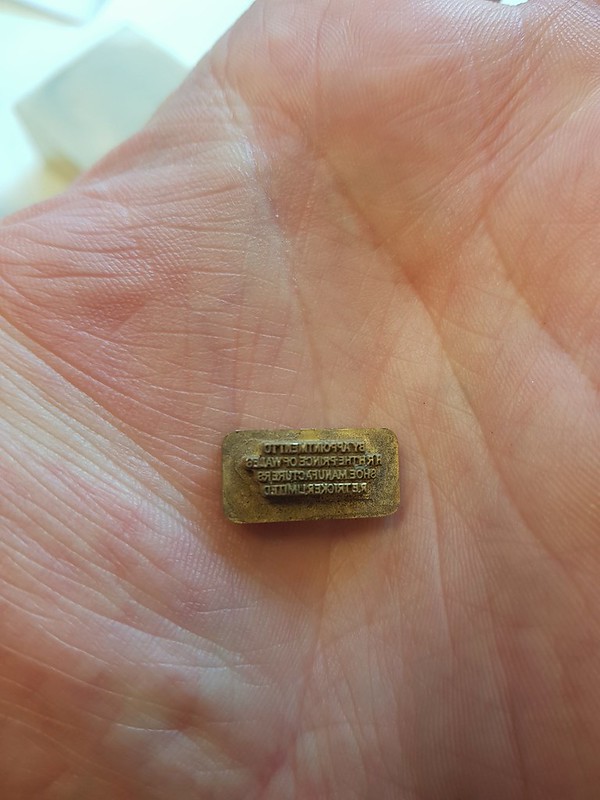 Re: Adventures in metalwork and machine restoration! #1297369

By TFrench - 26 Jul 2019, 23:52
- 26 Jul 2019, 23:52 #1297369
Pantograph progress: the inverter I had hoped to use didn't work - not sure if it was the VFD or the weird 2 speed motor. Bit the bullet and got a new motor and inverter that should all play together. Hopefully be running this weekend.
In other news, I've been playing with the lathe again. Had an absolute blast. A while ago I got a dickson toolpost for the big lathe but it wasn't a straight fit on the existing 4 way toolpost. Finally plucked up courage to have a go at making a new one (I've made this all up as I go along from a steady diet of youtube machining videos so let me know if you see I've done something particularly stupid!)
Started with a billet of suitable sized stock: 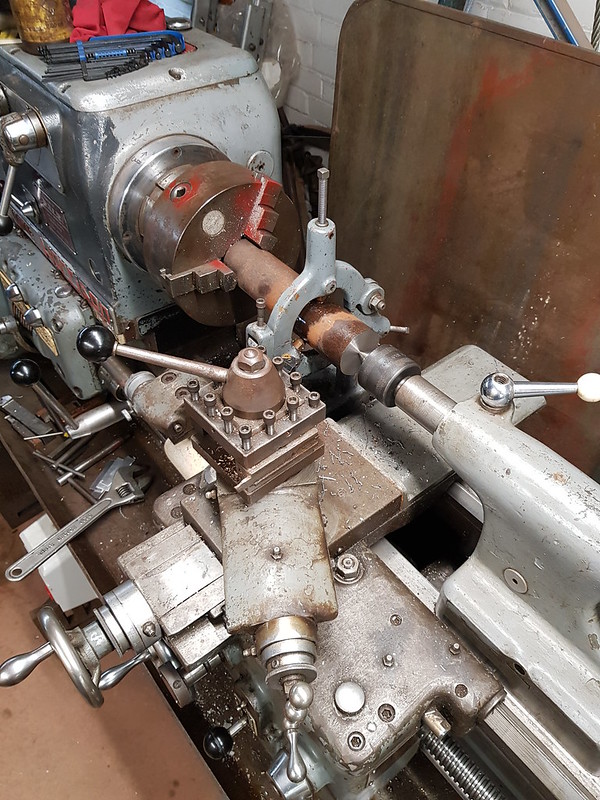 Roughing
Used the steady rest to face the end and get a centre in it. Then used a carbide tipped TNMG tool to get the rough features set out: 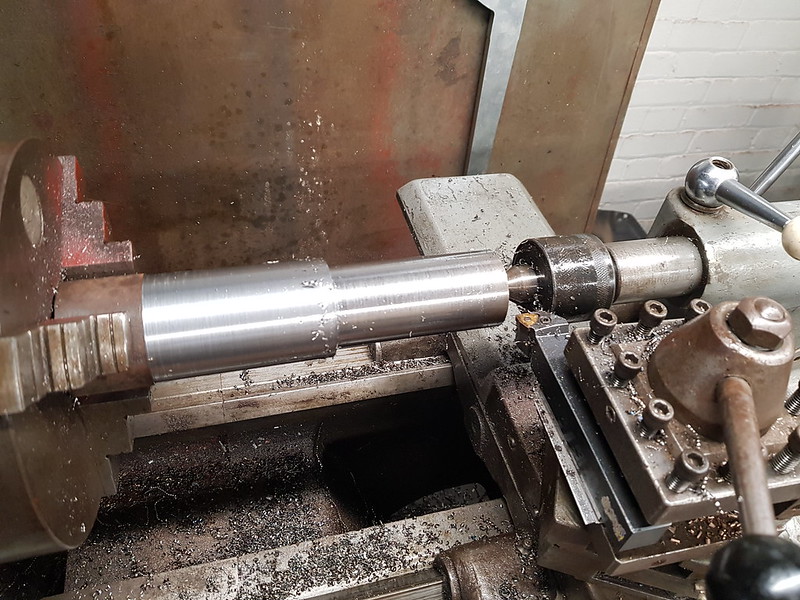 Cut the first thread with a tailstock die holder:
[url=https://flic.kr/p/2gHuaC2] 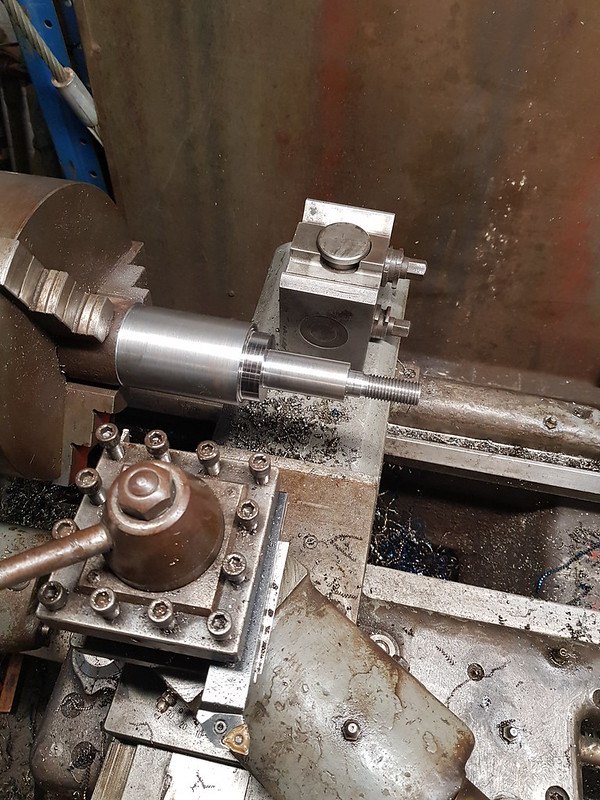 Threads!
Cut it to length in the bandsaw (cuts about 5mm off square, another thing to fix!) 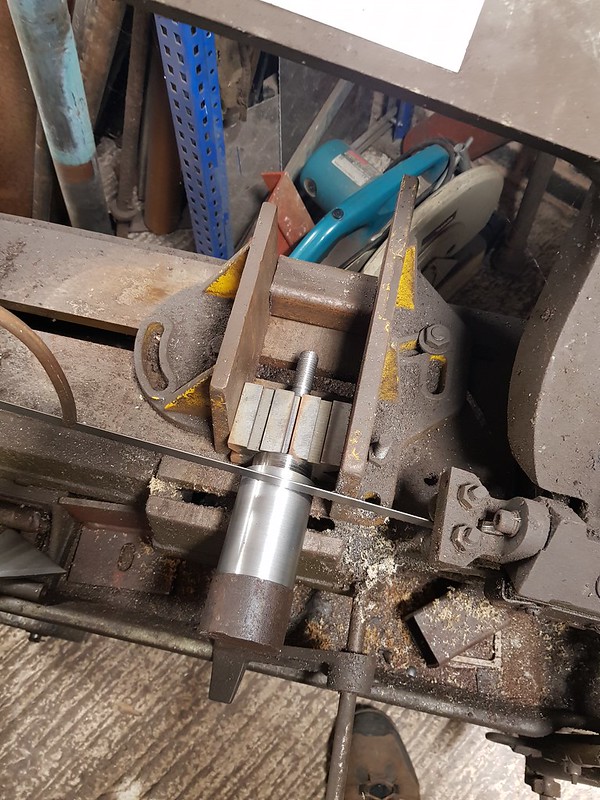 bandsaw
I remounted it in the lathe and faced it off, turned down and threaded the other end. I've got much more confident with myself and the lathe - learned so much on this one part! Main thing is that the more aggressive a cut the more the carbide likes it. I was messing around taking light cuts and getting long stringy springs - once I started taking a more "manly" cut I got much better chips. All good fun. Heres the finished bolt: 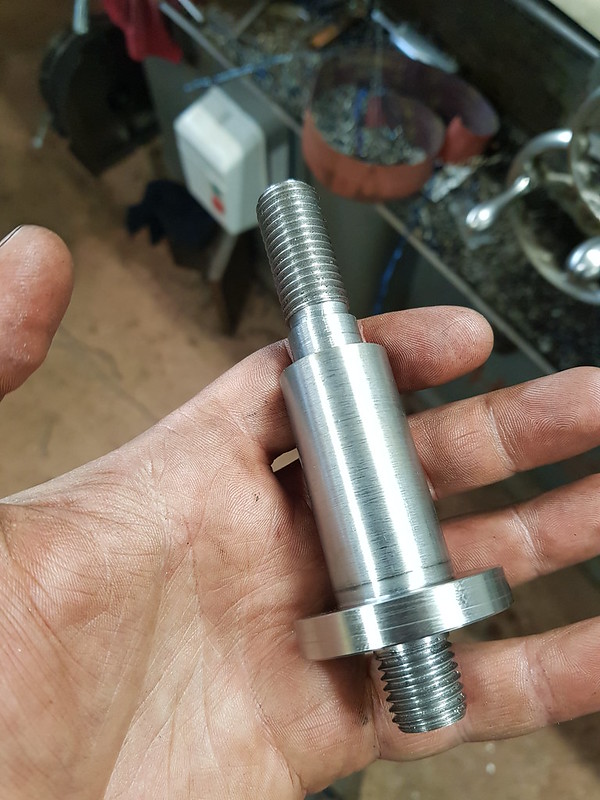 Finished
Fits perfect, which came as a surprise to me!

Surface finish could be better as well. Next job is making a T-nut for the cross slide for it and a nut for the top.