In the course of buying some stuff for my son in law I have received a beech spokeshave. The blade is nearly flat. Just ever-so-slightly bowed. The body of the tool is worn the other way (ie the body is concave, the blade convex). Clearly it would be easier to sharpen if the blade were straight........and it is only couple of mm from being straight. What would you do? I'm tempted to give it a few taps with a hammer and flatten it (and plane the bottom of the body flat too), but is there any way in which it was intended to be slightly bowed?

Don't try to straighten it, you'll just break it. Hardened steel. They were made like that so the corner wouldn't leave a ridge. If it is really badly worn you can cut out the worn part and replace it with new wood and reshape it to match the blade. Before you do try it as is and see how it behaves. If it works leave it alone, if it doesn't then repair it.

Wooden spokeshave blades were made in a range of curvatures from almost flat to quite sharp curve, the latter ones being travishers, and rarer. Absolutely flat ones seem to be quite uncommon, except on modern wooden shaves.

You can sharpen them on the side of an oilstone, moving the blade both up and down the stone, and side-to-side. Aim for about a 25 degree bevel. Alternatively, Paul Sellers has a method using diamond paddles;

Most wooden spokeshaves as found have quite a bit of wear on the mouth area, and it's not uncommon to repair them by letting in a piece of boxwood or brass. Don't set this parallel to the blade as you look at the tool, but allow for about a 5 to 10 degree angle, such that when the 'bed' is held tight to the work, the blade edge contacts, but the blade back slopes up at that angle to give clearance behind the cutting edge. That will make the tool more versatile, allowing you to control the cut to give heavy or light shavings by tilting into or out of cut. The slight curve of the blade helps too; middle of blade slightly heavier cut than ends, so you can take a sliver off the middle of a board edge if needed without cutting the edges.

A well-tuned wooden spokeshave is a more sensitive and versatile tool than a metal one, but wears much more quickly on the wood just ahead of the blade edge. Being low angle, they cut quite nicely on end grain when they're sharp, too.

As above but you shold also be aware that the old wooden spokeshave were used with the blade out of kilter. One side would have a small gap and the other a fairly bigger one. This allows you to take varying thickness shavings without havingto adjust it by just moving it across a bit, the slight curve helps with this.

Fantastic stuff gents. Much appreciated. It's been about 40 years since I last used a wooden spokeshave, and I guess the flat blade in my steel one has warped my thinking.

I've bought some blunt tools over the years, but this one takes the biscuit. I'll get it sharp then adjust from there as necessary, following your advice.

You have to love this website and those who contribute their knowledge don't you?
It's the web equivalent of an infinite amount of monkeys/typewriters. Bit scaled back maybe.

Once. Very proud of myself for spotting an old preston spokeshave (or 2?) rusted to ruin in an ambiguous joblot once, I got another type shave with it. Merrily trying to give it away on here AndyT nudged me gently. In his infinitely polite way. *Ahem.
Crikey. Thanks Andy.

Not mine.
Mine is still sat looking at me. I need to sell it to an American collector!
What price knowledge?
Cheers all. Especially to those who gladly and generously share their hard won knowledge and wisdom.

As your man Francis Bacon postulated as recently as 1620, the Ant, the Spider and the Bee.
Marvellous.

"Those who have handled sciences have been either men of experiment or men of dogmas. The men of experiment are like the ant, they only collect and use; the reasoners resemble spiders, who make cobwebs out of their own substance. But the bee takes a middle course: it gathers its material from the flowers of the garden and of the field, but transforms and digests it by a power of its own. Not unlike this is the true business of philosophy; for it neither relies solely or chiefly on the powers of the mind, nor does it take the matter which it gathers from natural history and mechanical experiments and lay it up in the memory whole, as it finds it, but lays it up in the understanding altered and digested. Therefore from a closer and purer league between these two faculties, the experimental and the rational (such as has never yet been made), much may be hoped."

It was not until I built a couple of travishers (for chair seats) that I came to appreciate how a wooden spokeshave works. They are designed differently to a metal bevel down spokeshave. The latter replicate a hand plane. Not so the wooden bevel up spokeshave.

This is one of the travishers I built ... 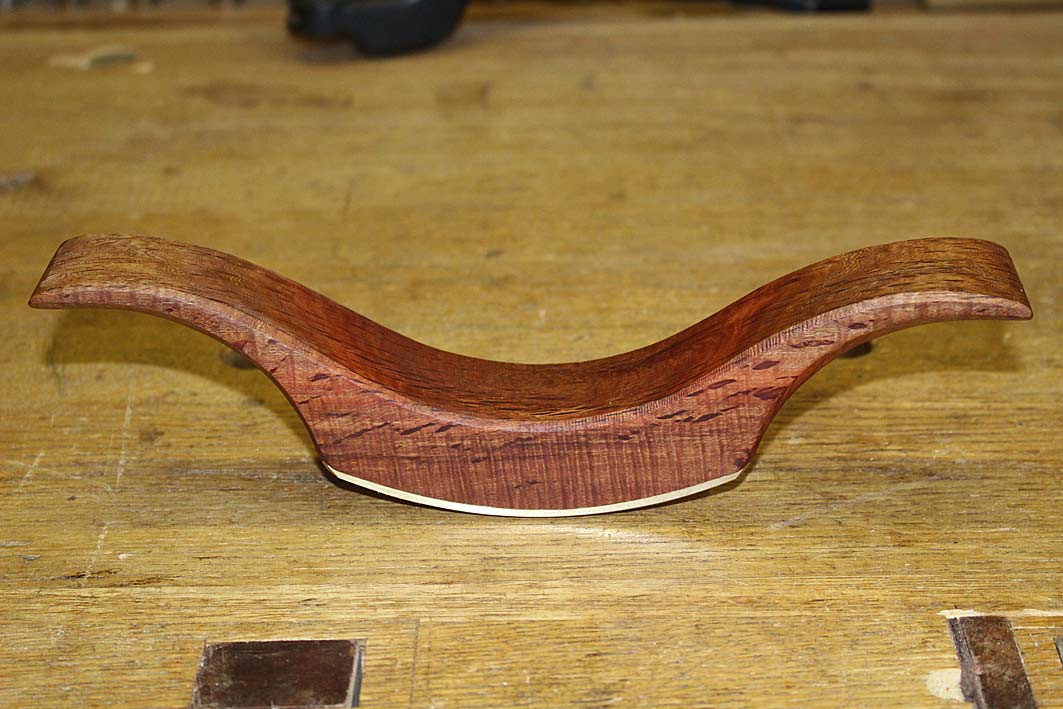 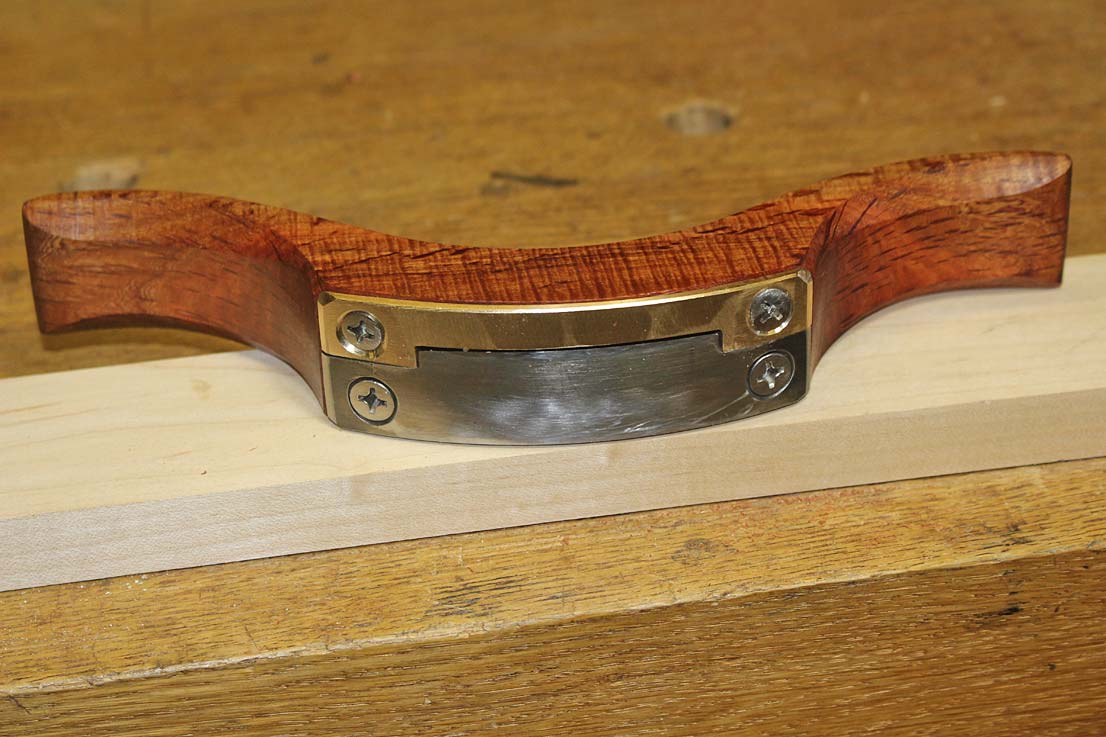 It is notable that the blade is set quite fine, and that this does not affect the thickness of the shaving taken. What does this is finger pressure on the sole, that is, pushing forward will open up the cut and create a thick shaving (counter-intuitively). Conversely, pushing down on the rear of the sole will close the mouth and create a fine shaving.

I tried to do this with a LV LA spokeshave (the black one), and could not get it to work this way. The reason is that the toe and heal are coplanar, unlike the travisher, where the toe has a fine slope down from the mouth (about 3 degrees). Old wooden spokeshaves are designed like the travisher. I also have BU Stanley spokeshaves which superficially resemble the LV, but are more like the travisher ... 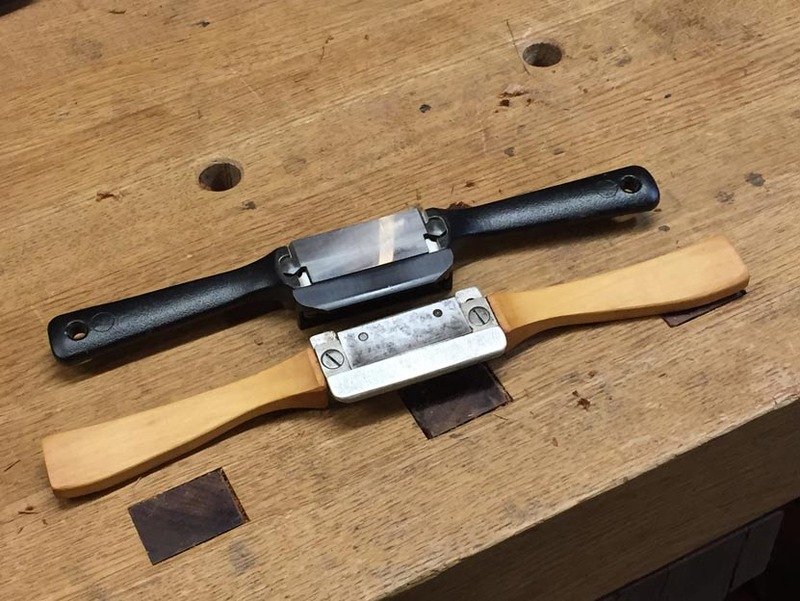 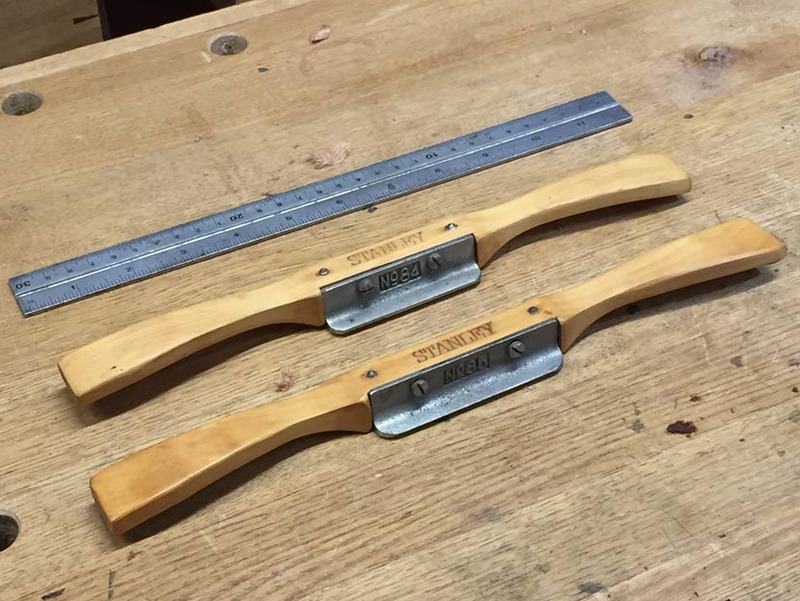 As noted earlier, the method of use is different to a BD spokeshave, regardless of whether round or flat bottom, which works like a BD hand plane.